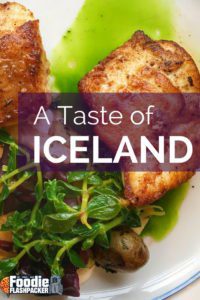 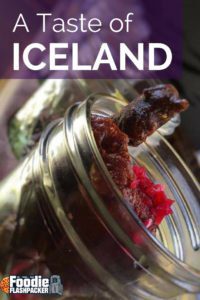 After my recent visit to Iceland, where I showed you some of my favorite Icelandic foods, I’ve teamed up with dealchecker to share with you ‘A Taste of Iceland’- an infographic detailing even more of the country’s unique offerings!

While I was able to try several of these, many are new to me.

I really enjoyed the smoked lamb, although I’m happy that I didn’t find out that one of the components used in smoking it is dried sheep dung until after sampling the dish. That may have affected how excited I was to have tried it. But don’t let it stop you from trying it – it really is delicious.

The pylsur, or Icelandic hot dog, is one of the best hot dogs I’ve ever had. It’s simple, yet delicious. I love that they don’t bog it down with too many unnecessary condiments like chili and cheese. Sometimes less really is more.

As both a scuba diver and a foodie, I was really torn about whether to try the minke whale during my visit. In the end, I had it twice- once as a steak and once smoked. I much preferred the smoked version. The steak had an interesting flavor, but the consistency proved a challenge for me.

I was surprised by how much I loved lundi, or puffin, meat. We tried it during a seven course tasting dinner, and it was served as thin slices of smoked meat. It was so good I had my portion and my friend’s!

Of everything on this list, what I regret missing most is the plokkfiskur- the Icelandic stew. I love anything with mashed potatoes in it, and pairing them with fish, bread and butter sounds amazing. It will definitely be on the top of my list of dishes to seek out on my next visit.

We tried the fermented shark tapas style, and I found it had a really interesting but intense flavor. I was glad to be able to try the small sampling portion before committing to a larger serving. 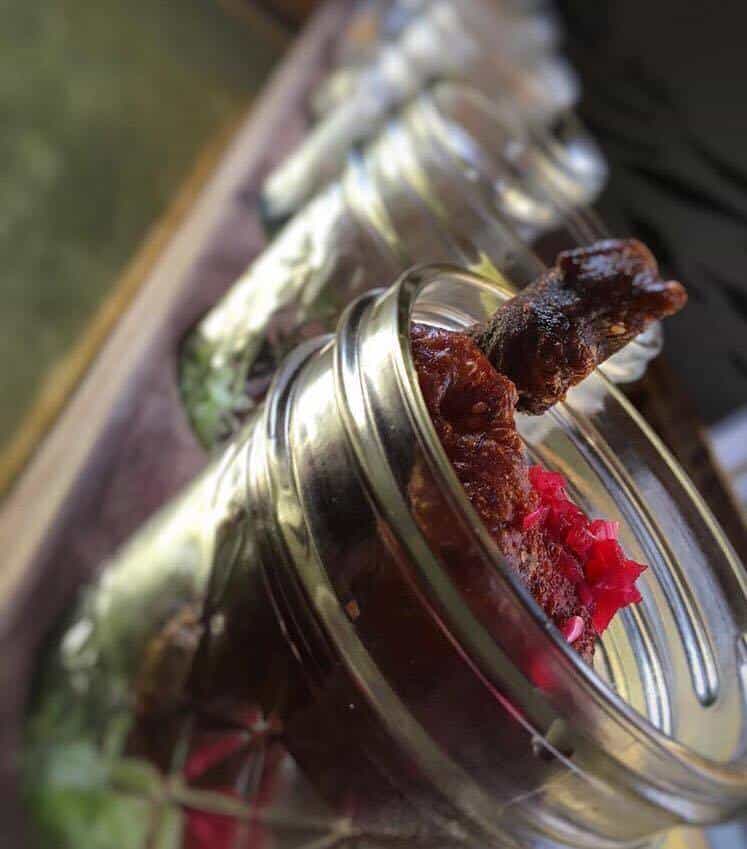 I would like to have tried the sviô, or sheeps head! I actually tried it during a visit to Morocco, although there it was roasted rather than boiled.

Hrútspungar, or rams testicles may sound off putting to most, but in Oklahoma, where I’m from, they’re called calf fries or Rocky Mountain Oysters. They’re considered somewhat of a delicacy, although they’re are from bulls or calves, not rams. In the future, I’ll try them pickled, as the Icelandic prefer them, but back home we serve them deep fried.

The bleikja, or Arctic Char, is one of my favorite finds from Iceland. Not only does it taste amazing, but the texture is some of the best I’ve ever had. I had it several different ways during my visit, including grilled and in stews. 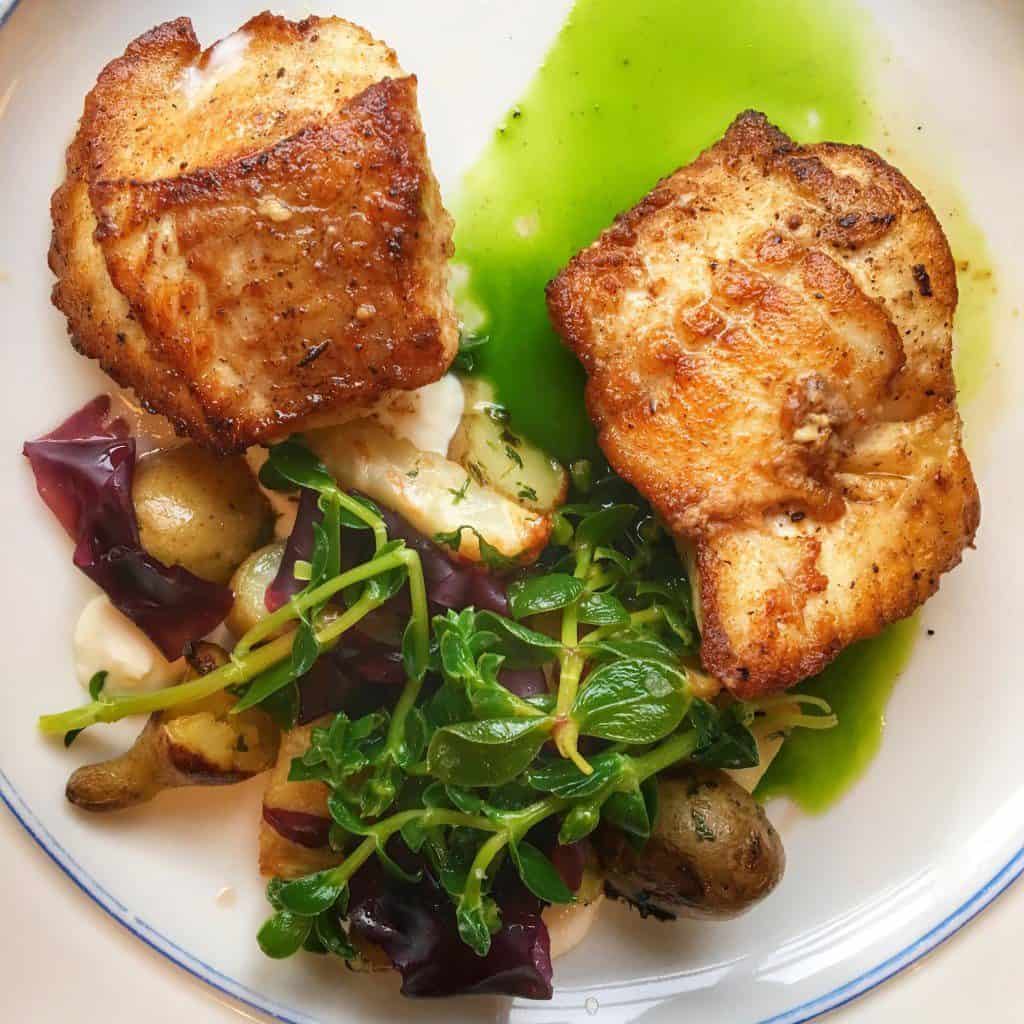 I always mention that I don’t have a sweet tooth, but I really did enjoy skyr, especially when it was paired with granola and fresh fruit. While most compare it to yogurt, I actually prefer the texture of skyr, as it’s actually a soft cheese. 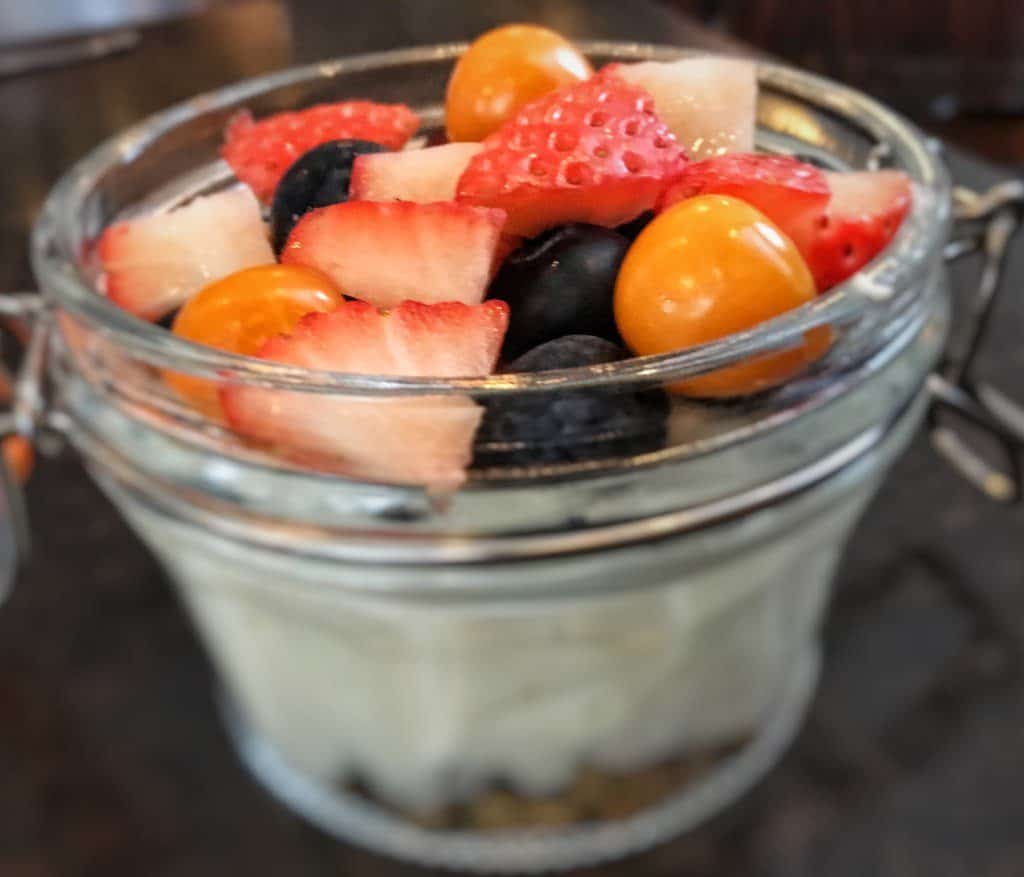 During one of our dinners, we were each served a shot of the famous brennivin, or black death schnappes. I can see how it got its name! The closest thing I can compare it to is the rakia I’ve had when visiting Eastern Europe. Brennivin is so strong that we all agreed you could likely use it as jet fuel!

A Taste of Iceland is a graphic produced by dealchecker.co.uk

Which of these dishes do you most want to try? Is there one you would never try? Let me know in the comments section below!

I will definitely need to go try the food in Iceland! Looks so good and different from anything. Thanks for the yummiest post.

I was really surprised by how great the food was! I hope you make it there soon- you'll love it!

I just love your infographic. Last year I had visited Iceland with my family. At that time we saw so many places like Drangey, Hvitserkur, Akureyri, Kerlingarfjöll, Port of Reykjavik etc. We had eaten so many Icelandic seafood dishes. I just love Skyr. We really enjoyed our trip with the help of Discover Iceland. I hope we will get a second chance to visit this place again and again.

Thank you! Yes, Skyr is awesome. I'm really wanting to visit again during the winter to see the ice caves.

I liked the way the subject was introduced in your article. I am not a foodie but some of them looks quite delicious. I would definitely want to try black death schnappe (hahaha) and live tell the tale. :)

Wow, I didn't try any of these! To be honest, I don't know if I would be brave enough to try them. Perhaps on my next trip back!

I will definitely need to go try the food in Iceland! Looks so good and different from anything I've had before. I guess when you live in such a cold place you don't really have a choice :D