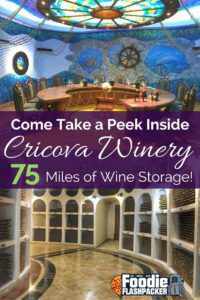 While visiting friends in Chişinău, the capital city of Moldova, we learned that Cricova Winery, one of the largest wine cellars in the world was only ten miles from us. Obviously, we had to go. 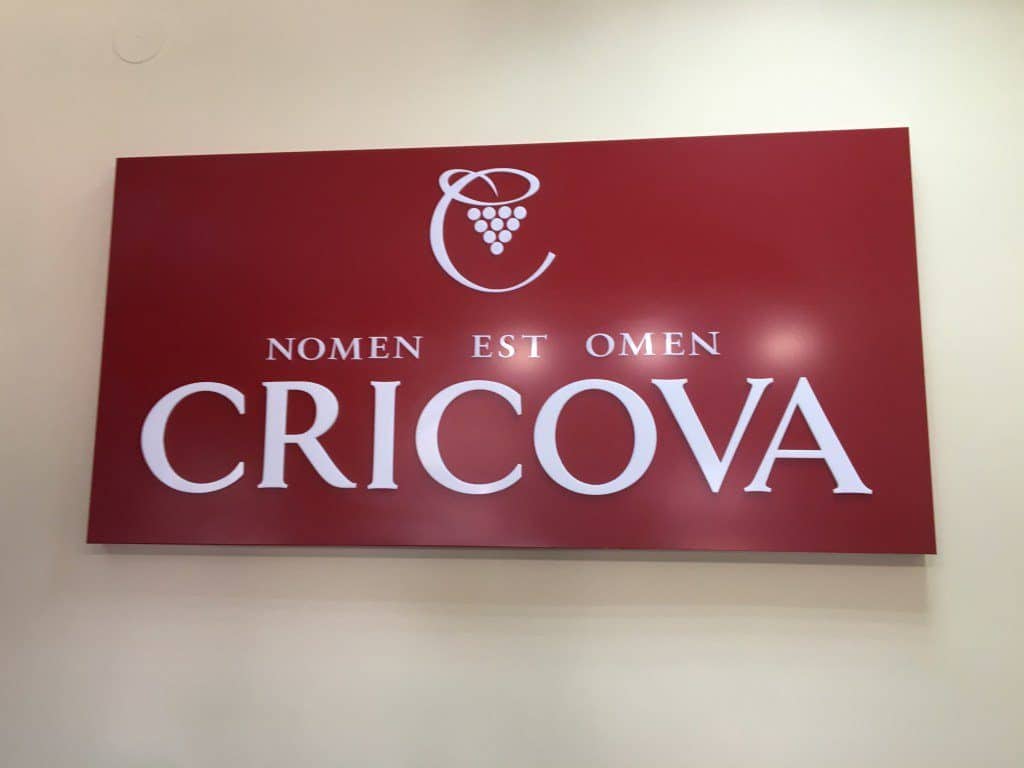 Cricova is currently under consideration to be declared a UNESCO World Heritage Site. They winery began the registration process recently, and if approved, they will be the first winery on the list to be recognized.

An Underground City of Wine-

The subterranean storage facility is known as The Underground City of Wine, or simply as Wine City. The high functioning city contains warehouses, bottling facilities, tasting rooms, and even a movie theater where you can learn about the history of Cricova and the production process during one of their regular wine tours. 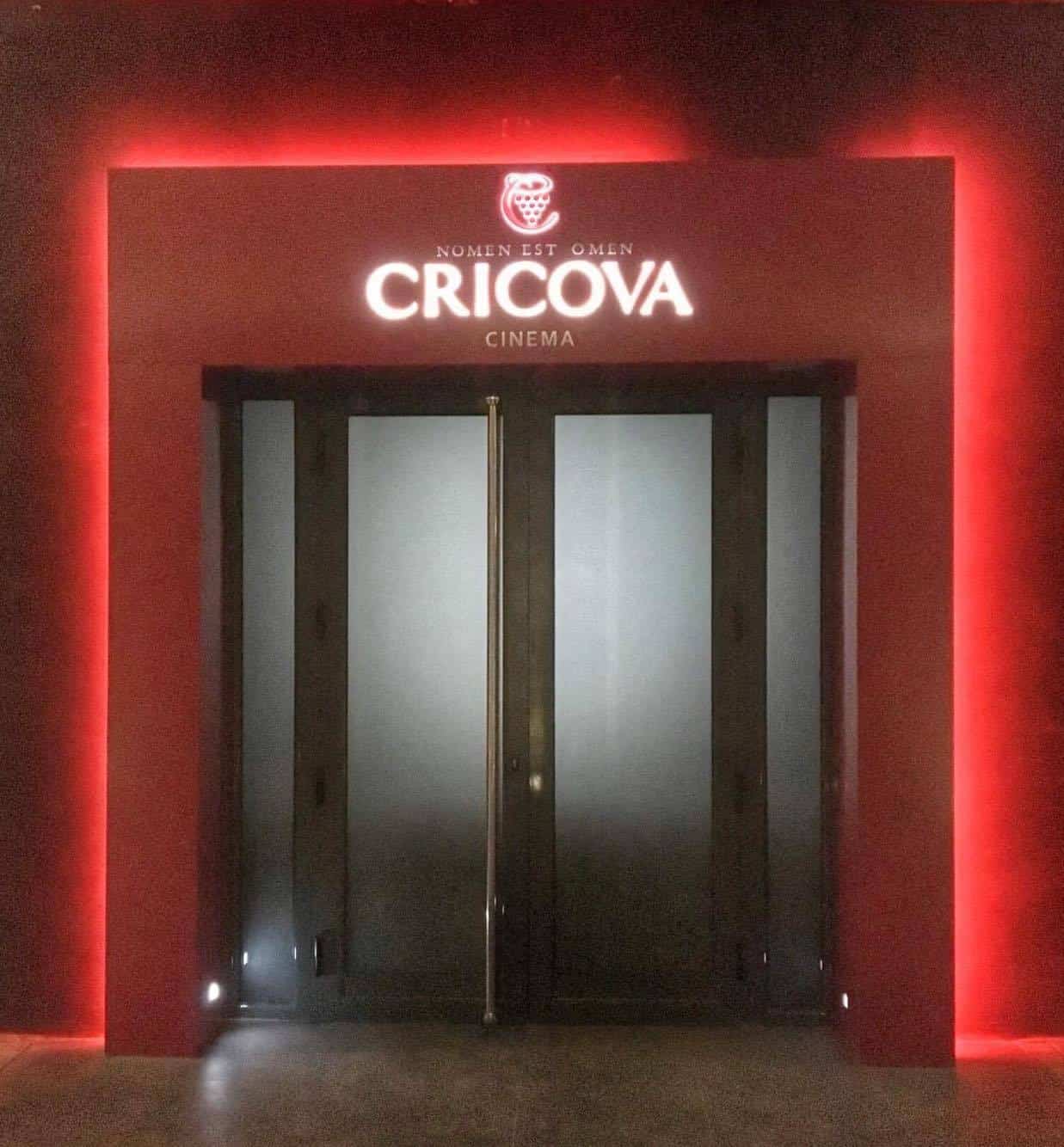 The storage tunnels are so large that the tour actually takes place via electric trains similar to large golf carts. You’re loaded onto the carts and descend into the underground city. 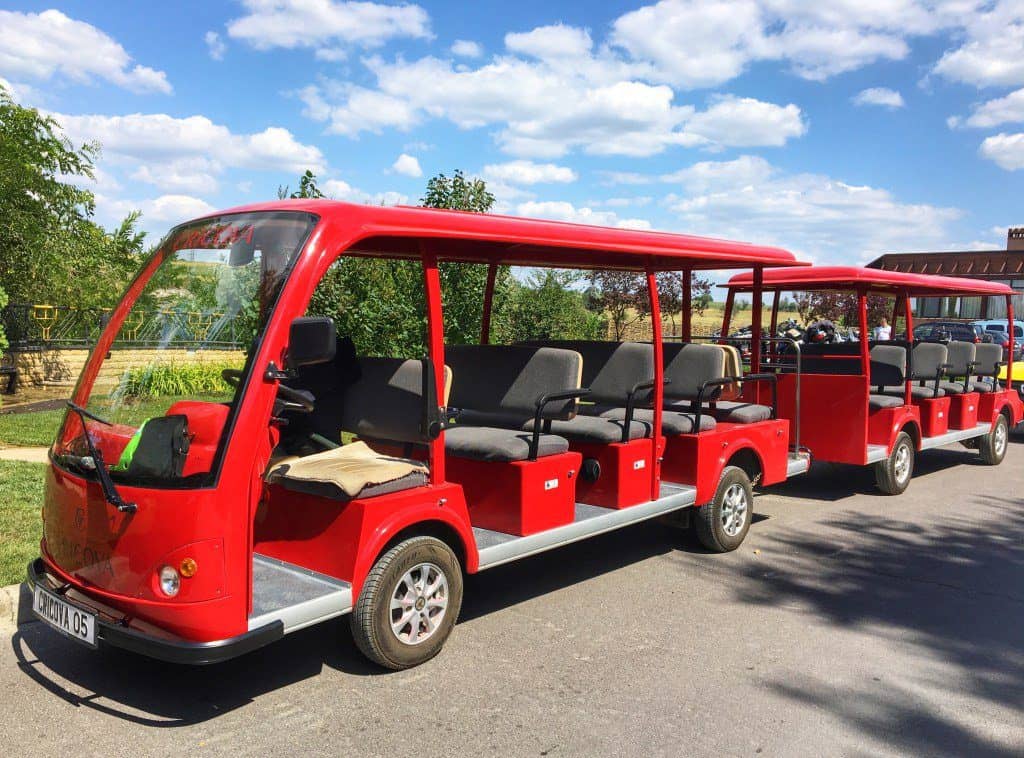 The first thing you’ll notice is an immediate drop in temperature. To create an environment ideal for wine storage, the tunnels are kept at a constant 12 degrees Celsius (54 F) with a regulated humidity level of 90 percent.

The tunnels were carved from limestone in the fifteenth century as the capital city was formed. They were converted to wine storage in the 1950’s.

As you cruise along the tunnels, you’ll notice they are named like streets, with the names corresponding to the wines each particular tunnel holds. 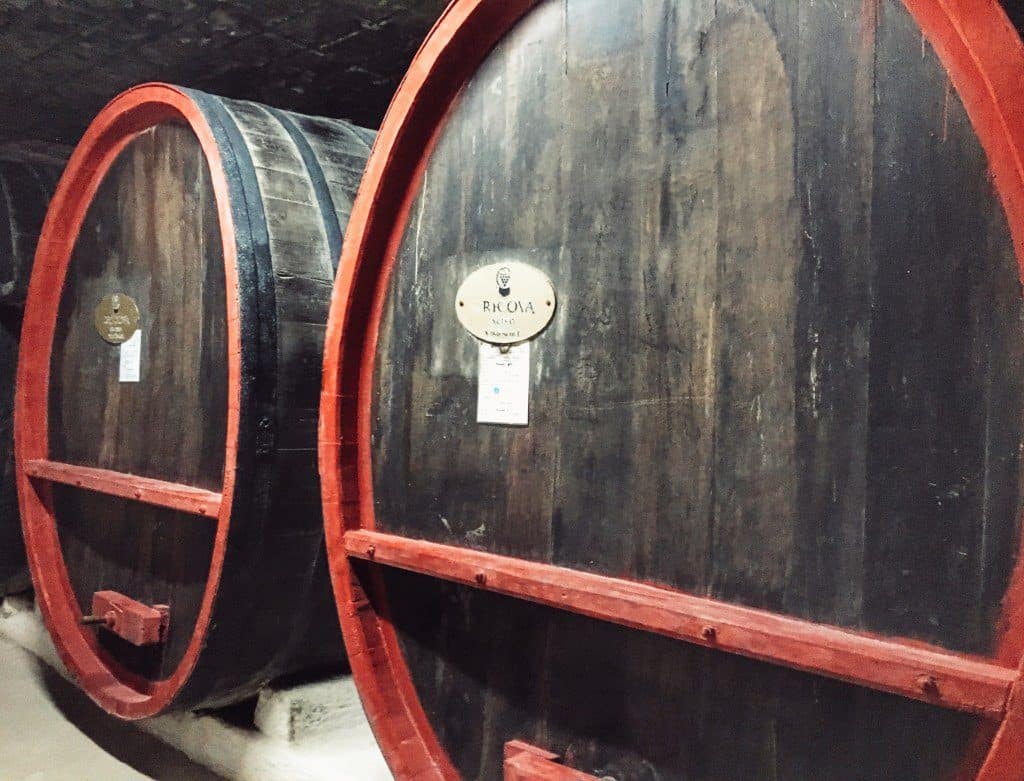 Wine is the number one economic product of the country of Moldova. The country is actually the seventh largest wine exporter in the world, largely because of the bottles produced at Cricova Winery.

White wines are held for 6 months, while red wines are stored in large casks for 2 to 3 years.

Cricova is most famous for their sparkling wines. In fact, it’s said locals wouldn’t think of celebrating a special occasion without a bottle.

Sparkling wines are stored upside down for 8 weeks and turned 45 degrees by hand every 2 days to allow the sediments to settle in the neck. Then, in a process known as disgorgement, the neck is frozen so the liquid will congeal and remove the sediments. Afterward, sugar is added, and the bottle is topped up with more wine. Next, the bottle is corked and wired and is ready to be served. This process is known as the traditional Champenoise method and is the same used in France to make Champagne. 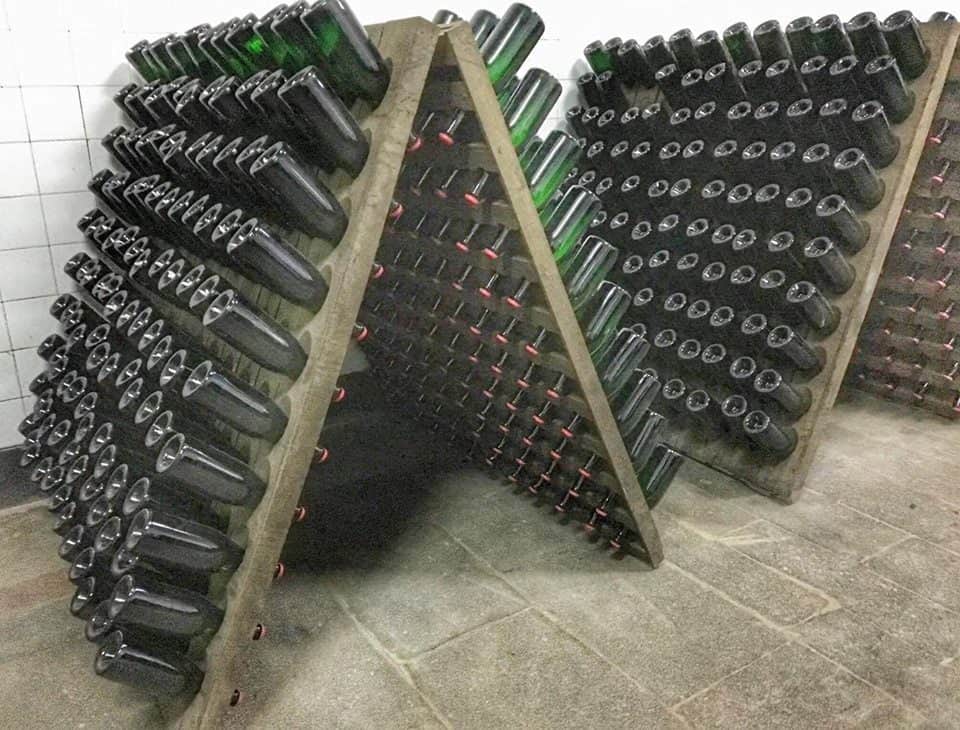 The winery also produces a unique red sparkling wine made from Cabernet Sauvignon with fruity flavors of blackberries and blackcurrants. Red sparkling wines are not common, but it is a popular choice with locals.

The massive labyrinth also holds the impressive wine collections of celebrities and major political figures. Angela Merkel, for example, stores her personal collection in the cellars.

The shelves are labeled by numbers assigned to the owners and each bottle is carefully maintained by the staff. 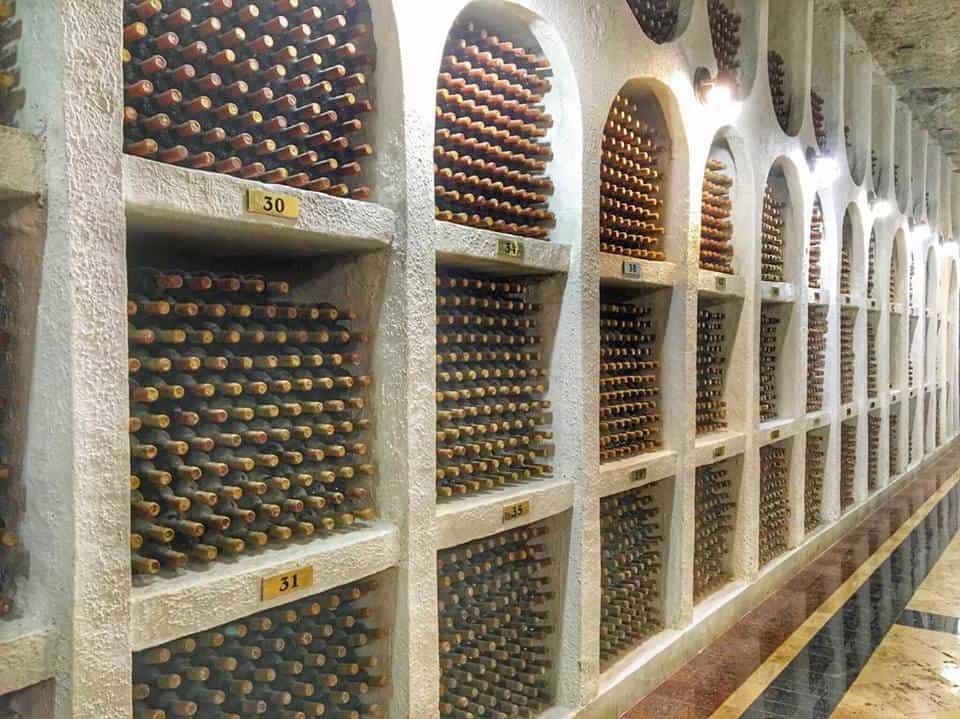 The cellar also holds an impressive wine museum with collections from all over the world. The oldest bottle in the collection is a Jewish Passover Wine dating back to 1902! 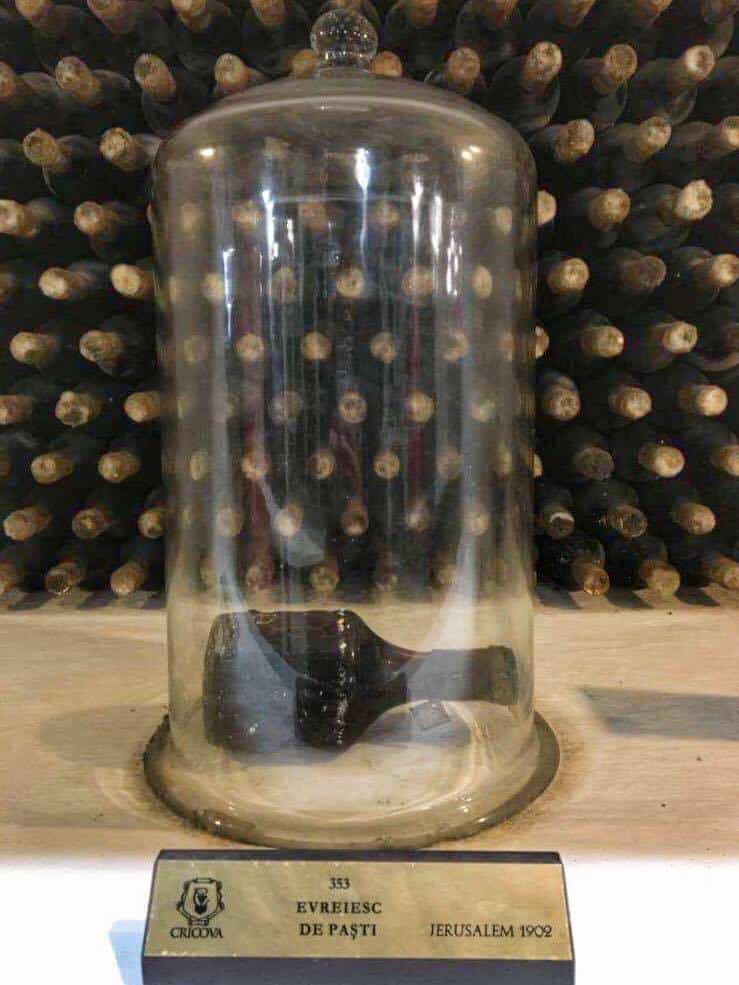 Finally, at the end of the tour, we reached my favorite part- we finally get to taste a selection of the wines. Depending on which package you’ve chosen you are led to the room hosting that tasting

I would call some of the tasting rooms gaudy, ostentatious even. 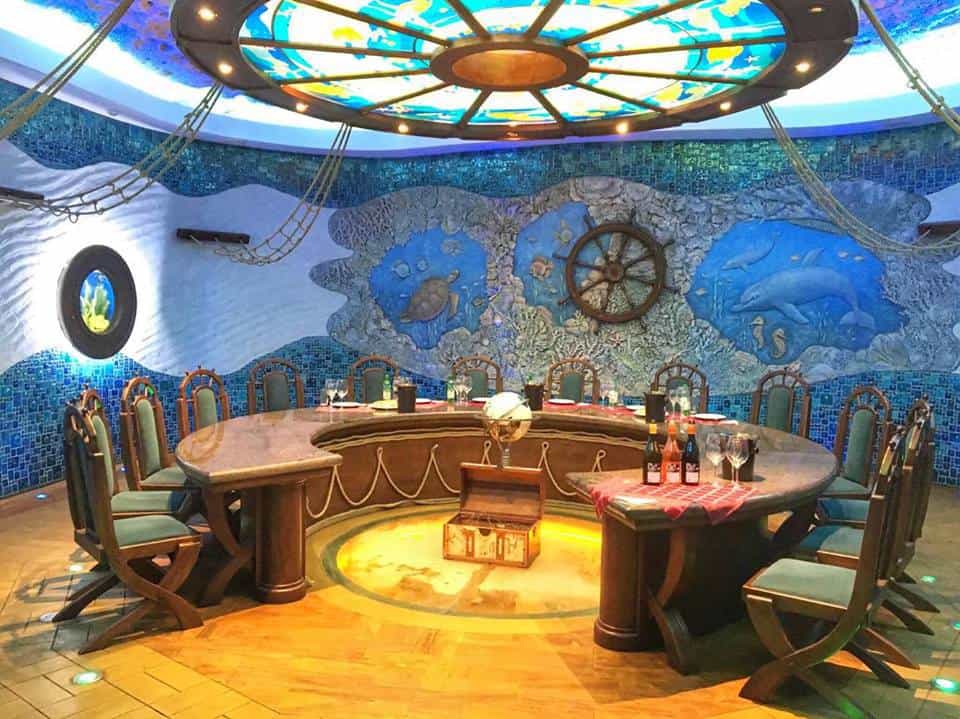 Others were more subtle, but still grand. 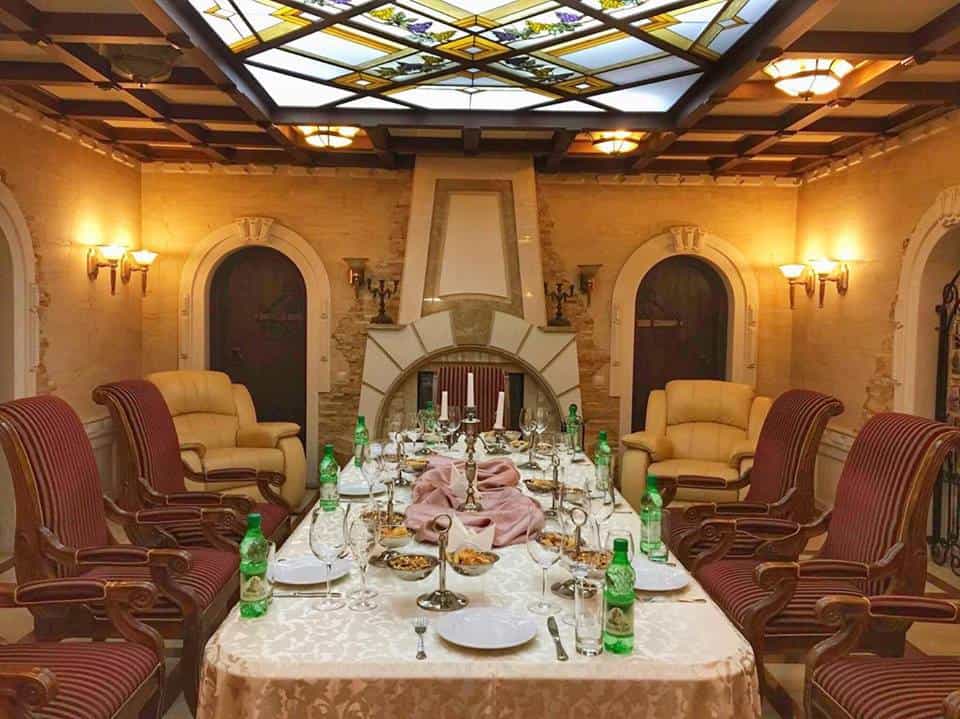 We chose a package that included six types of wines paired with local traditional foods. The food was good but honestly average. 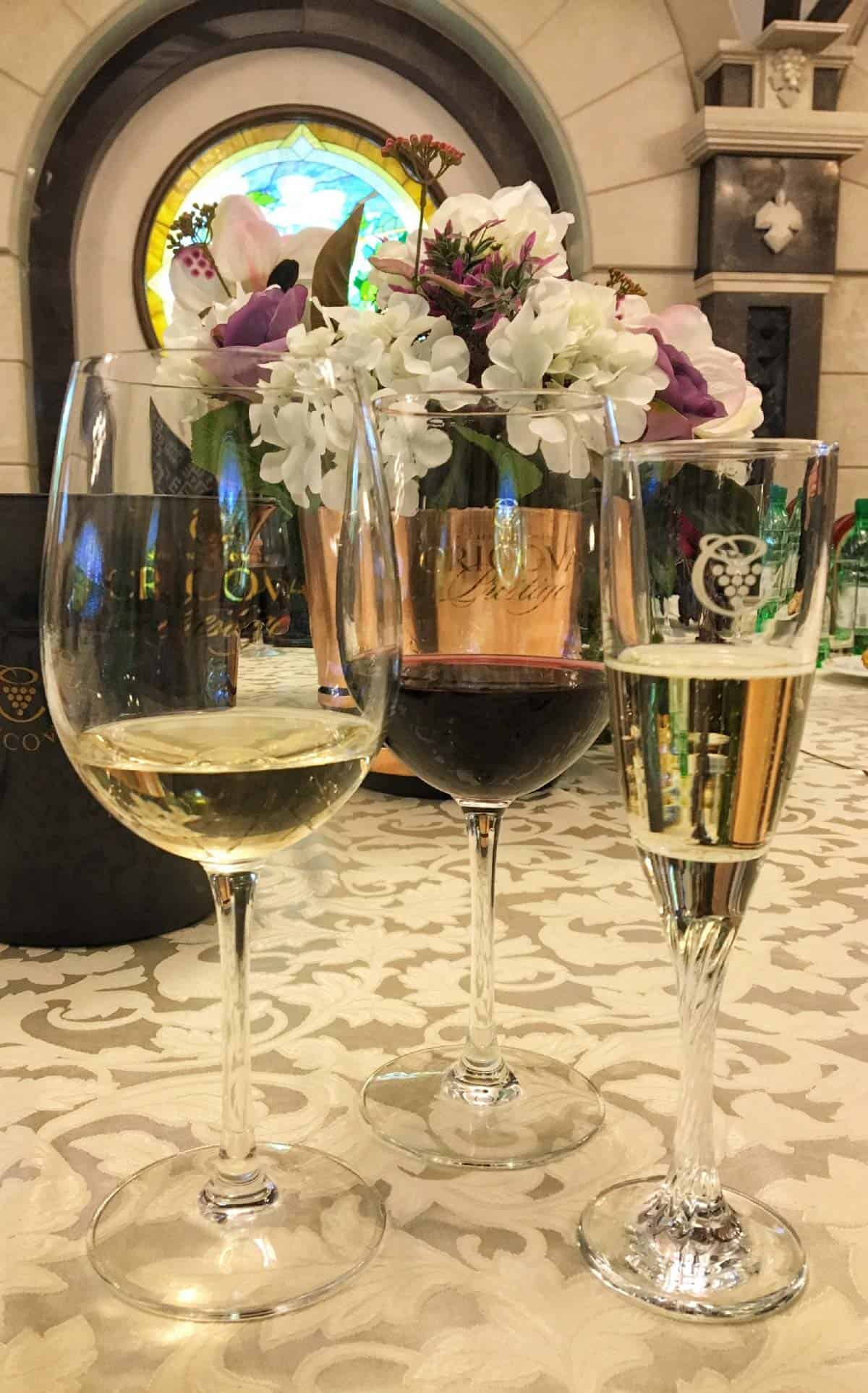 I’m not typically a fan of champagne or sparkling wine but this bottle was nice- light and bubbly without being overly sweet. I enjoyed all of the wines and made sure to pick up some bottles to take home on my way out. Nearly all of the bottles for sale are less than 10 euro.

I highly recommend a visit to Cricova Winery to anyone in Moldova. I learned a lot about the wine making process and of coursed loved sampling all the different varieties. 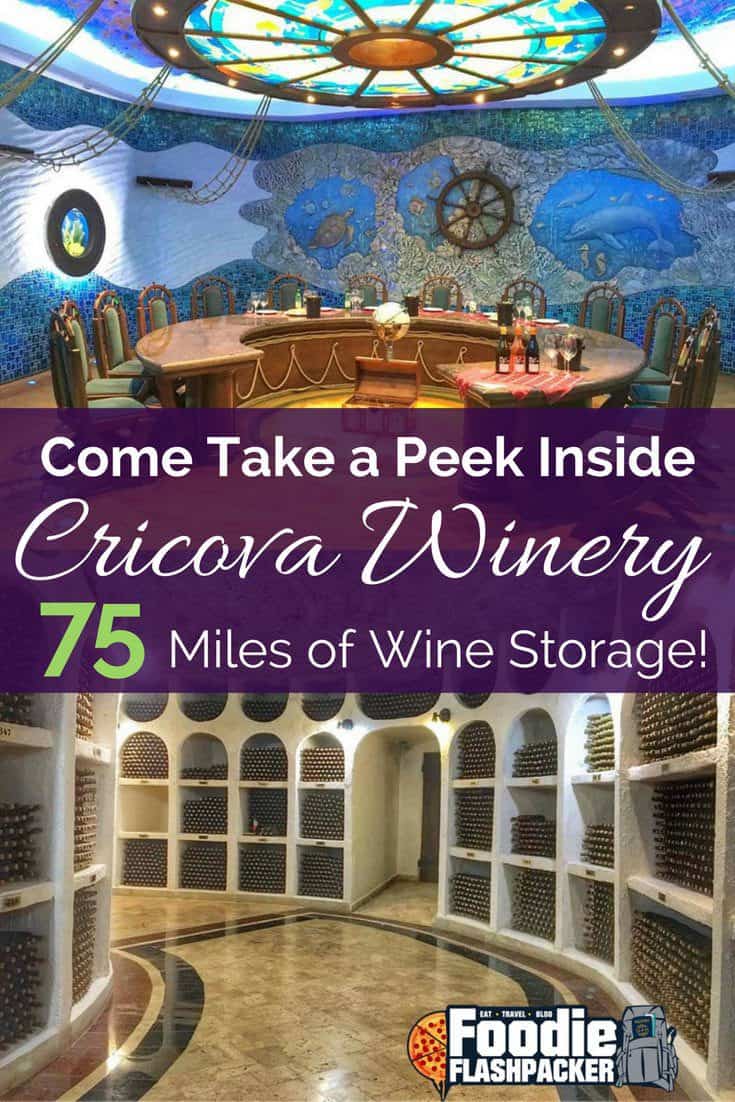 Practical Information: Cricova offers many types of tours ranging from basic overviews and tastings with small accompanying snacks to VIP dinners. To explore options and find the tour best suited for you, click here.

I just wanted to develop a word to be able to thank you for all the unique things to do while having the wine tour of Cricova winery, you are placing on this website. My particularly long internet investigation has now been compensated with wonderful suggestions to talk about with my family. I‘d assert that most of us visitors are really fortunate to dwell in a really good community with very many brilliant individuals with very helpful strategies. I feel pretty blessed to have come across your web pages and look forward to some more awesome times reading here. Thanks a lot once again for all the details.

Amazing! The bottles was so beautiful in the eyes. Will pinning this one.

Great tour of the winery and amazing facts you shared! Thanks for sharing your wonderful experience of a historical place!

Thank you so much! I loved Cricova. I hope to go back soon.

Wow! This winery seems amazing and stunning. I will have to visit it soon, Nathan!

Wow, what a fantastic place and a great discovery for me today! Like Gagarin, I would not mind getting lost inside this winery for a couple of days! Great post which I am also pinning for a future use when I decide to go to Moldova. Thanks!