My birthday dinner at Country House Peace  in Krka National Park in Drinovci, Croatia was a meal that wasn’t supposed to happen but is the one that I immediately think of when I look back on the best meals.

We had meant to stay in another area of the national park as this one is a bit further from the main part of town. My friend that had booked it was repeatedly apologizing thinking he had messed up my birthday.

When we arrived the family could not have been nicer or more accommodating even driving us around the national park showing us areas we would not have otherwise seen without their assistance. When it came time for dinner and the family found out it was my birthday they suggested a meal cooked “under the bell”.

I didn’t really fully understand what that meant but they seemed excited it about it so we agreed. The mother immediately jumped up and ran to begin picking vegetables from the garden. That’s how fresh this meal was going to be- the vegetables were picked just in time to cook them.

We were served wine from their own cellar, olives, and a small loaf of freshly baked bread while dinner was prepared. We soon found out that under the bell meant that the meal would be cooked in a traditional Balkan method under a cast iron dome called a peka which both cooks and roasts the meats and vegetables.

We watched as the mother prepared a fire that the entire peka would be placed into and then covered for the duration of the cooking process. Several different types of meats and vegetables were added to the pan along with a bit of oil and then the entire dish was covered in the fire. 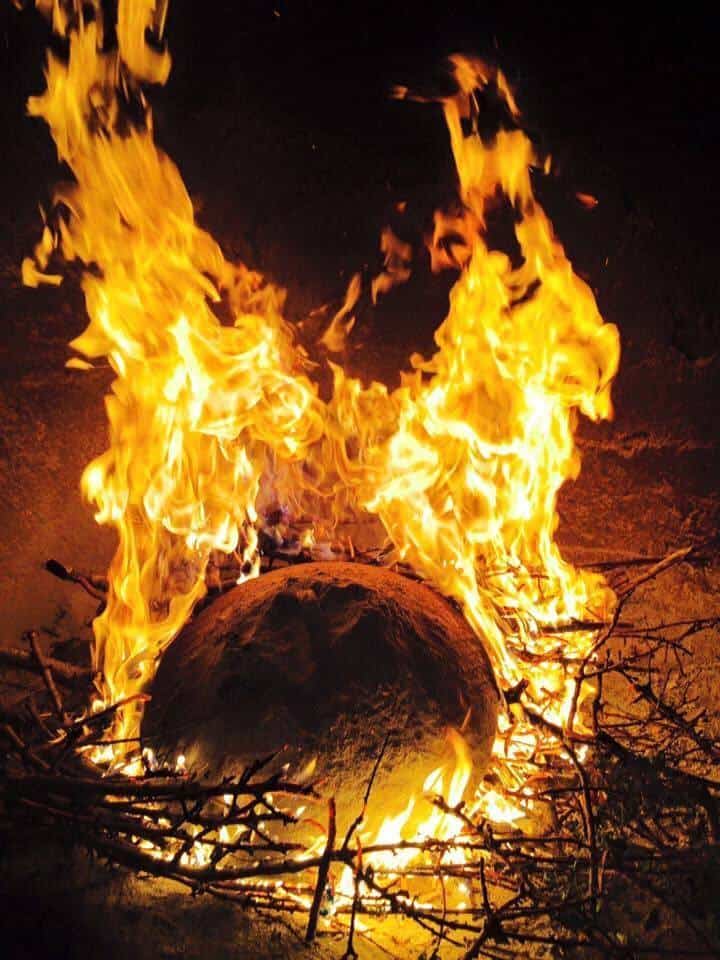 By the time dinner was ready to be served more than an hour (and many glasses of wine) later, I was beyond excited. Our host carefully removed the heavy dish from the the flames and pulled back the lid to reveal perfectly cooked lamb, chicken and fork tender vegetables. 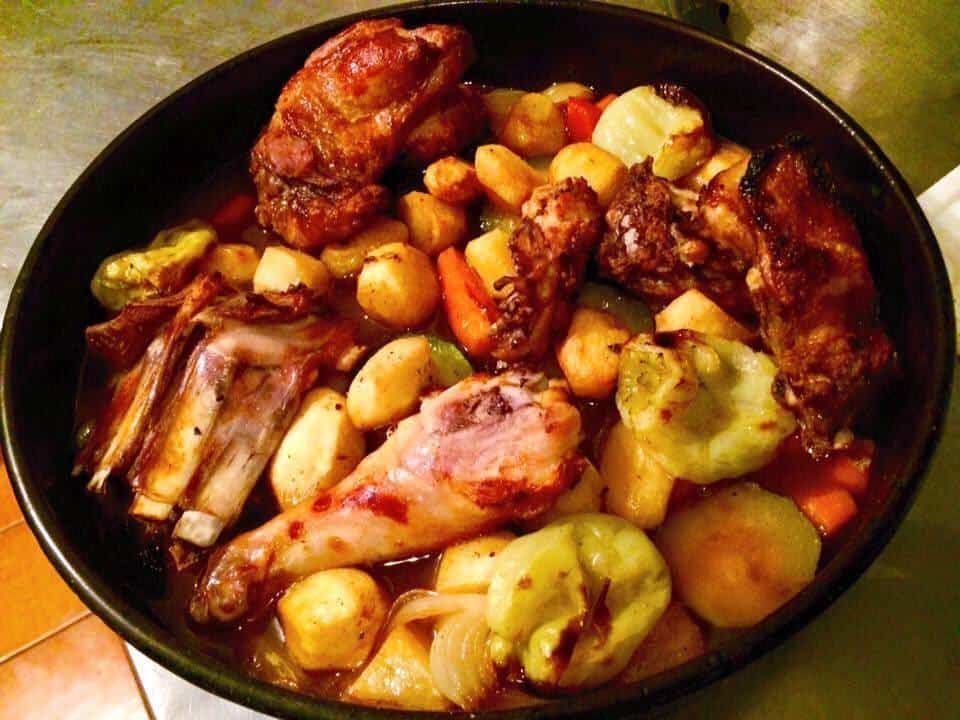 This pan may look like enough to feed a large family but that night the two of us finished it ourselves, soaking up the sauce with the crusty homemade bread and washing it all down with more of the wine.

My first experience at Rustic & Blue in Chiang Mai, Thailand was the beginning of my becoming a regular.

The restaurant utilizes a farm-to-table concept and although the menu is rather small everything on it is done incredibly well.

Because of a small bit of overexcitement my friend and I decided we needed two appetizers along with a an entrée each. We started with duck prosciutto and goat cheese with a balsamic glaze over toast, homemade burrata with toasted bread, and for my main I had sriracha fried chicken over mashed potatoes. 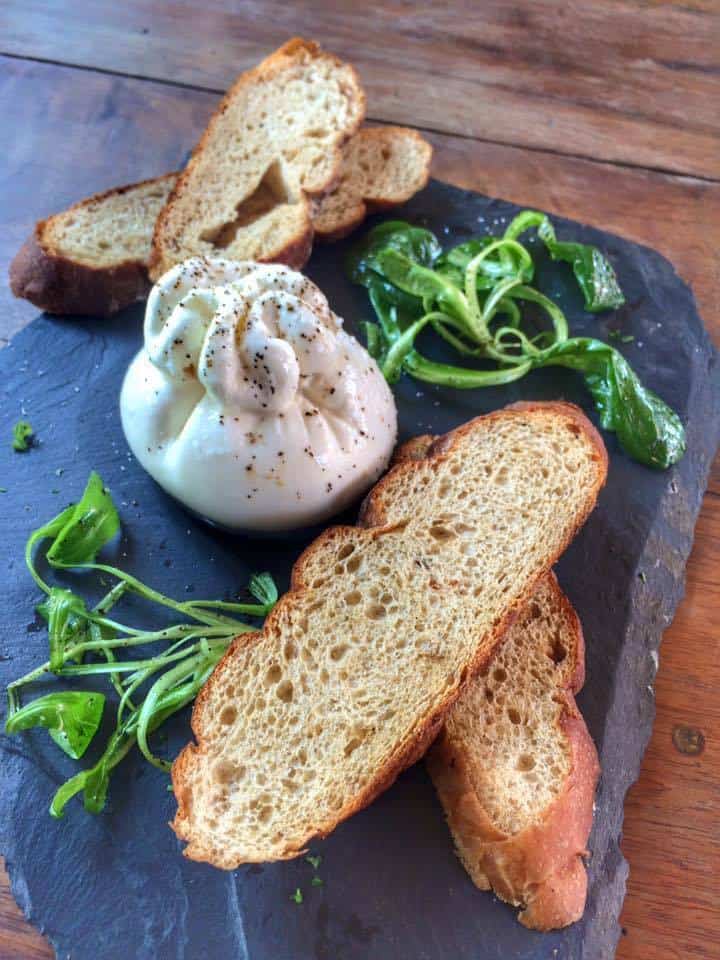 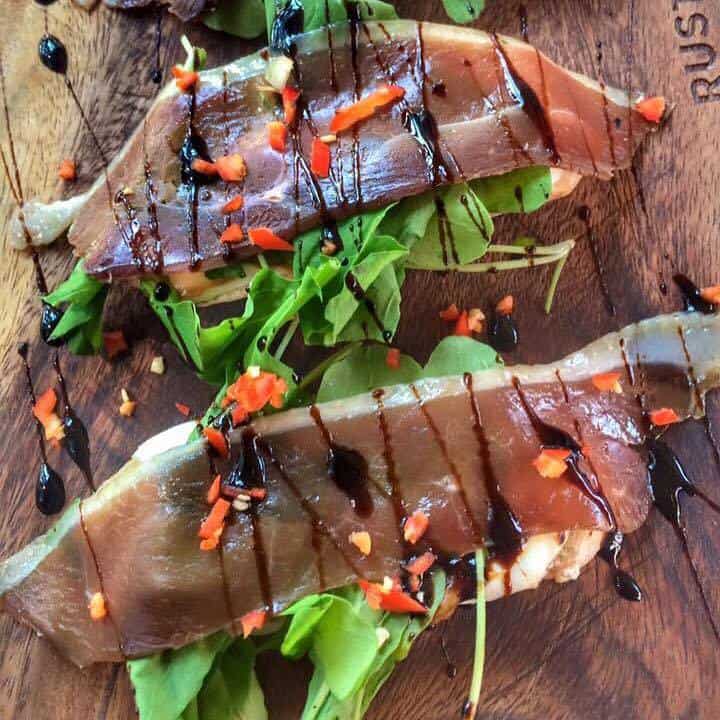 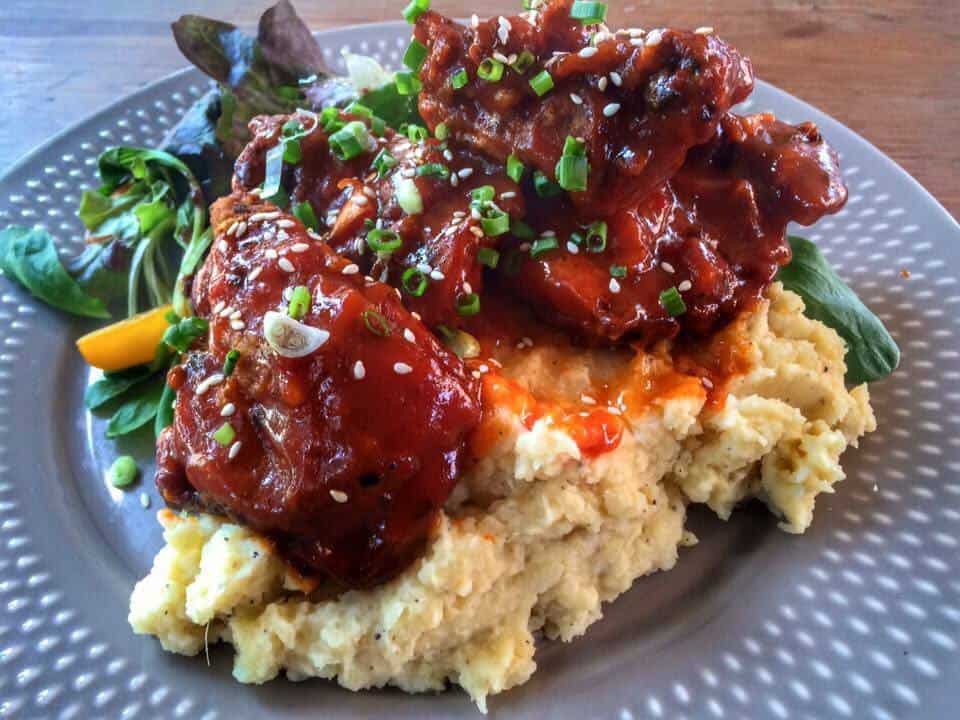 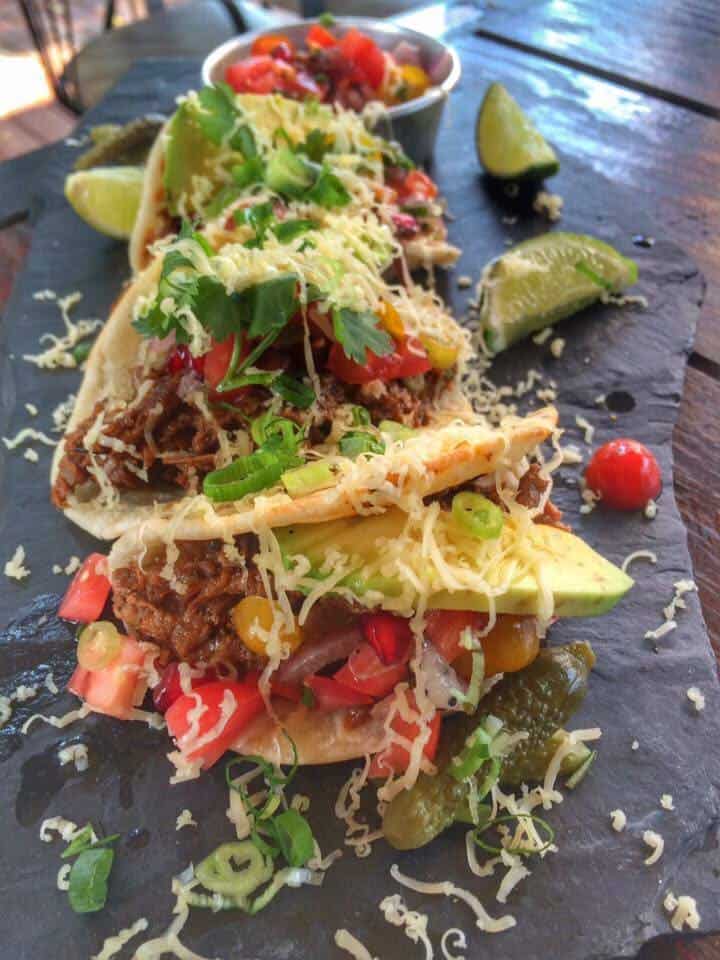 After this initial meal it’s become somewhat of a running joke how I often I end up returning to try the rest of the menu. One of my favorite finds from a later visit is the tacos as it can be really difficult to find good Mexican food in Southeast Asia. The restaurant has recently announced a dinner menu so it’s likely I’ll be spending even more time there in the near future.

The best sandwich of my life:

As soon as I arrived in Porto, Portugal I threw my bag in the room and asked the receptionist for a recommendation on where to eat. I asked her for a personal recommendation, somewhere local people ate at rather than a tourist restaurant, a place she personally enjoyed.

She directed me to Casa Guedes which she said was her favorite sandwich shop. I was initially somewhat hesitant as I didn’t know if a sandwich was the local experience I was looking for but I decided to go with her suggestion.

I knew when I arrived and joined the line out the door and noticed I was the only foreigner waiting that she had taken my request to heart.

What I found when I finally made my way to the counter was the most simple, perfect sandwich I’ve ever eaten. The homemade bread was crusty on the outside and chewy in the center, the roasted pork was tender, juicy and salty and the local cheese was a bit tangy and was the perfect flavor pairing to the meat.

I quickly inhaled this sandwich and washed it down with an ice cold local beer. Days later I made my way back to this same restaurant to have this meal a second time. I knew I couldn’t leave town having only eaten this just the once. As I joined the end of the line I found the receptionist that had initially sent me to my new favorite sandwich restaurant waiting in line for her own meal. 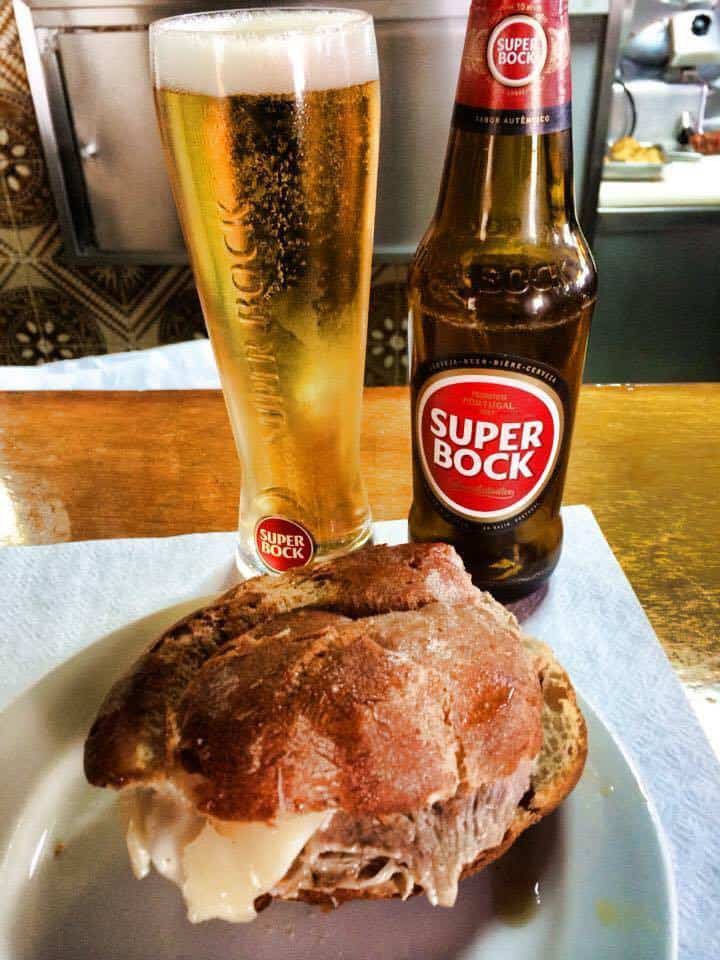 When I made plans to visit Turkey I immediately became excited about the Hagia Sophia, touring the Bosphorus, and having my first ever Turkish bath.

I had no idea how amazing Turkish food is- the food alone is worth getting excited about! At home I’ve tried Turkish dishes but from a much more limited menu- the standard kebabs and basic dishes.

Turkish food has such variety and is quite different depending on what area of the country you’re in. The soups, breads, Turkish pizzas, roasted meats, seafood- all of it was so delicious and unexpected. 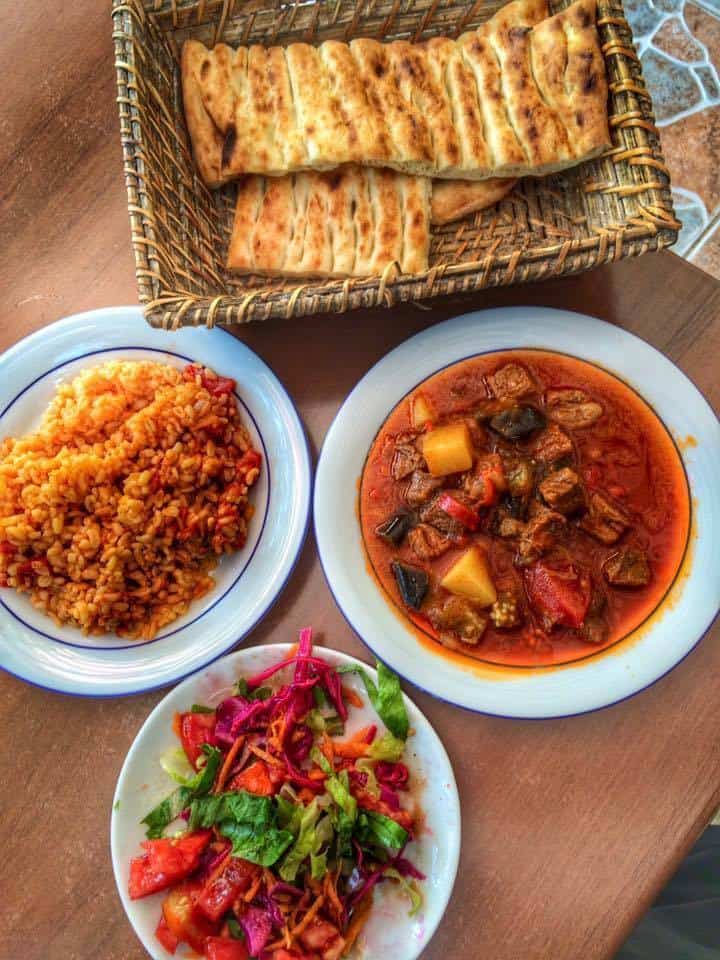 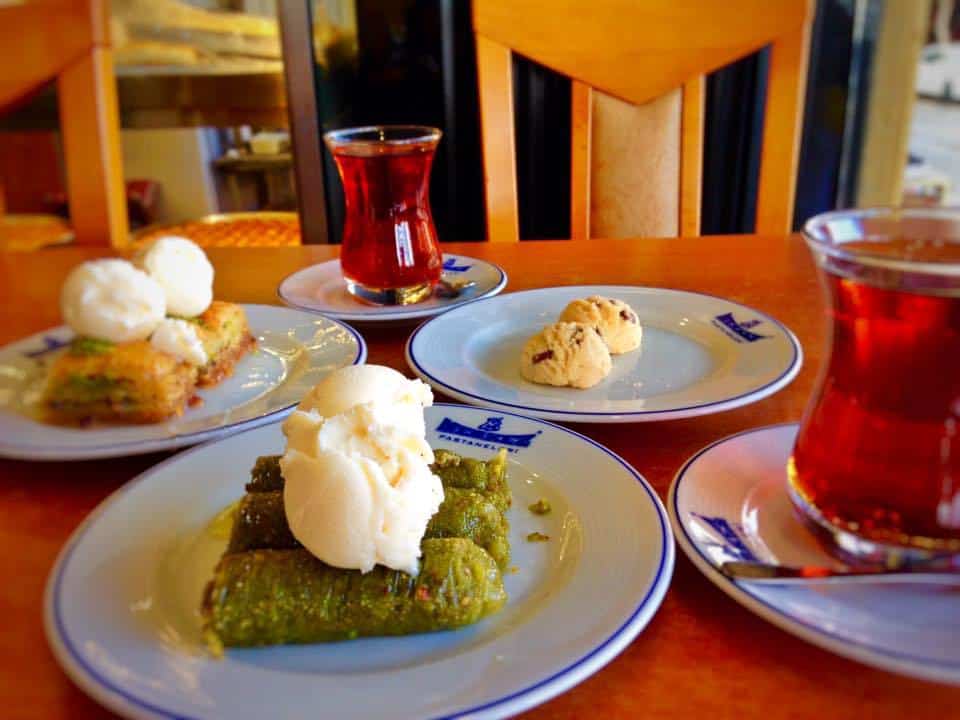 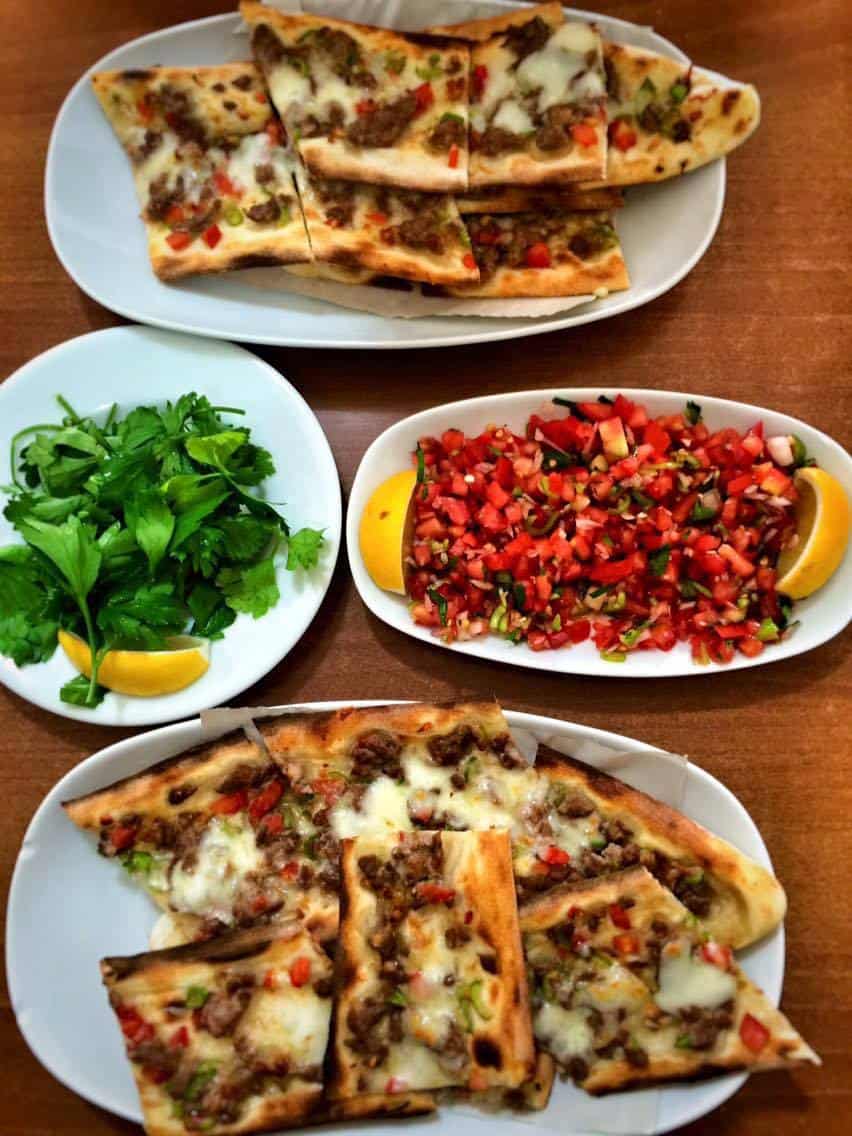 I’ve also spent a lot of time in different Asian countries so I’m used to a tea culture but I’ve never seen as much tea being drank as I did in Turkey. The Turkish seem to be crazy about for their tea! In the crowded markets men selling teas dash between stalls and the shop owners seem to be constantly drinking or ordering tea. When you walk into a shop you are almost always offered a small tulip shaped cup of hot tea. 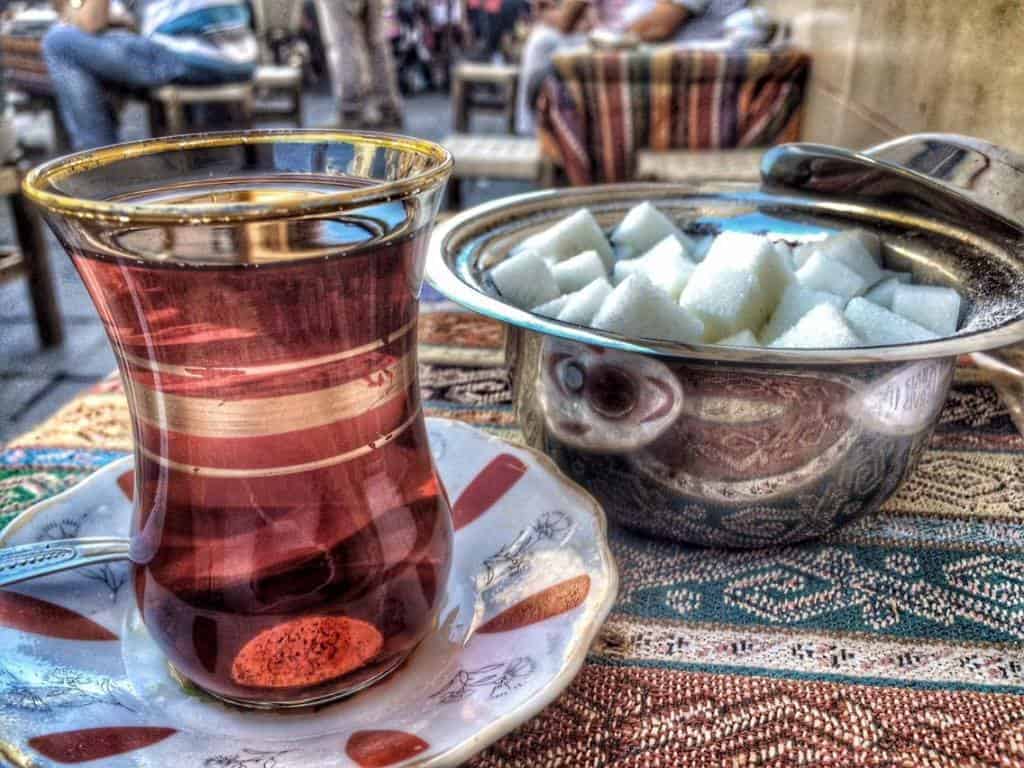 And while I can’t claim it to be one of my new favorite drinks my friend loved the ayran, a salted yogurt drink you could buy from street vendors. 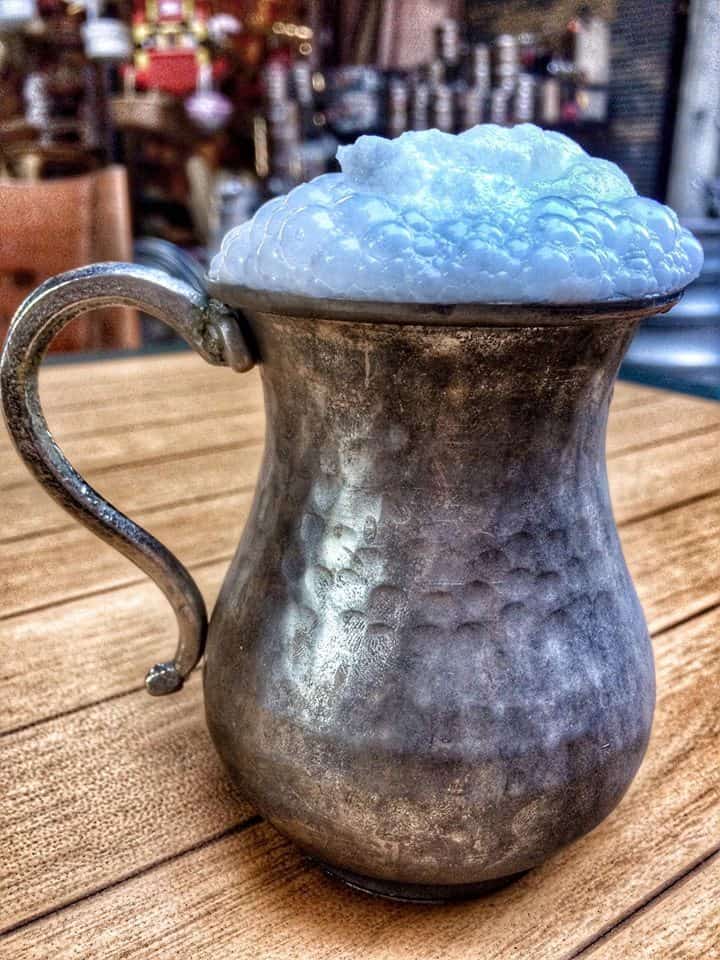 Whenever someone talks about the wines of Europe they are almost always referring to either French or Spanish wines. I had no idea that such amazing (and affordable) wines were being produced in Hungary, specifically the rosès.

I had always turned my nose up at this type of wine, maybe thinking it girly or too sweet because of the pinkish color, until one night when I was enjoying a dessert of a bowl of fresh cherries and the waitress suggested a rosé to pair with the fruit.

“No thank you, I don’t really care for rosés but I will have a glass of a dry white wine” I told her.

“You try this. If you don’t like, you don’t pay”, she told me. Clearly she knew how I operate because that’s an offer I will never refuse.

With the first sip I knew I had been wrong. The wine was cold, crisp, dry, fruity, and not nearly as sweet as I had (wrongly) assumed it would be. I was hooked. For the rest of the summer I sought out rosés, specifically the Hungarian labels. Months later at a rooftop bar with a spectacular view of the city I was probably more excited than I should have been when I found they served a Hungarian rosé. 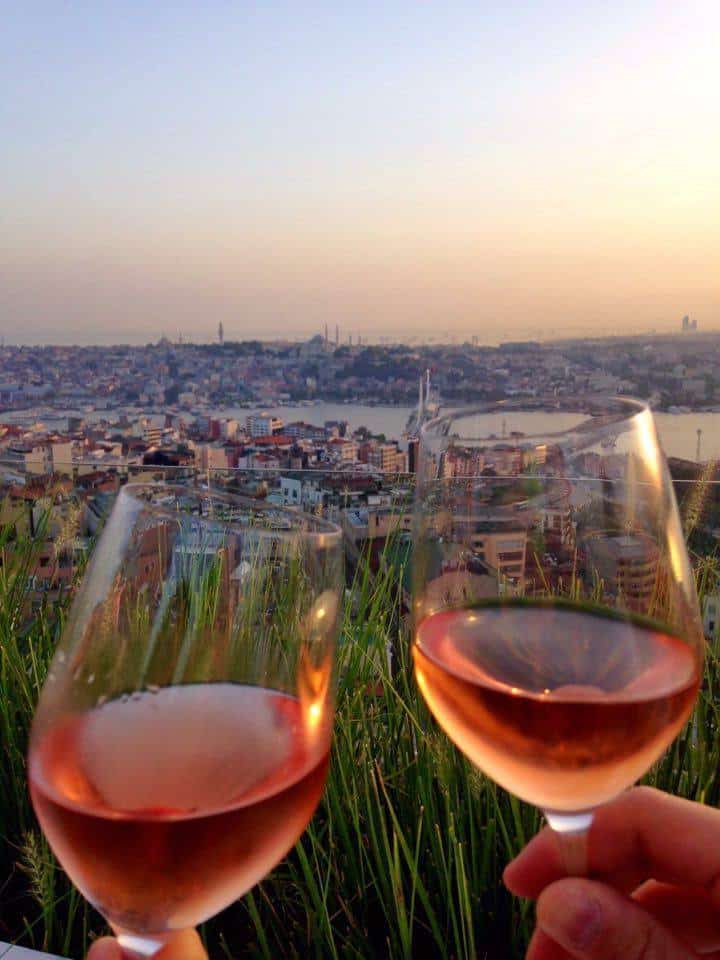 The best burger in Chiang Mai:

Although there is a lot of truly amazing and affordable local and street food to be found in Thailand sometimes you just want a burger. A big, greasy, bad for you, delicious burger.

I was having one of those days when we made our way to Rock Me Burger near the old town in Chiang Mai, Thailand. As if ordering a burger wasn’t enough of a splurge I quickly honed in on what had to be their most unhealthy offering on the menu- the macaroni and cheese bacon burger.

I quickly scanned over the rest of the menu trying to talk myself into something healthier- a chicken burger or maybe even a veggie burger, but my eyes kept going back to my initial selection. I wish I could say I regretted it but it was worth every bite. 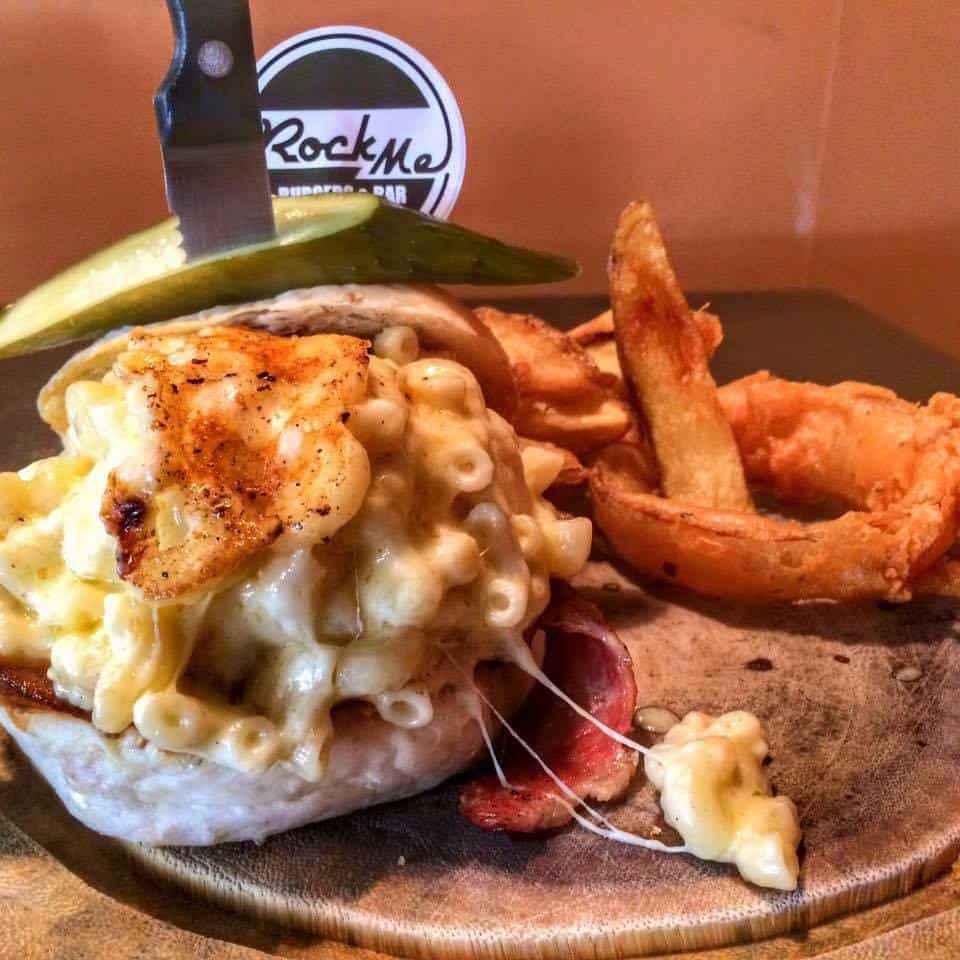 The burger was piled so high with bacon and cheesy pasta that I had to smash it down to be able to eat it. The fries and onion rings that accompanied the sandwich were crispy, salty and perfect. This is a place I can’t take myself too often because I can’t see myself ordering anything else besides this dish on future visits. It’s hard to have a black bean burger once you’ve had this.

And finally, another meal from Rustic & Blue. I struggled with whether I should be mentioning the same restaurant twice in one post or not but if anything this should tell you how amazing their food is.

Recently I attended their Farm Feast- a meal served forty-five minutes outside of town on the same farm where they grow much of their organic produce. 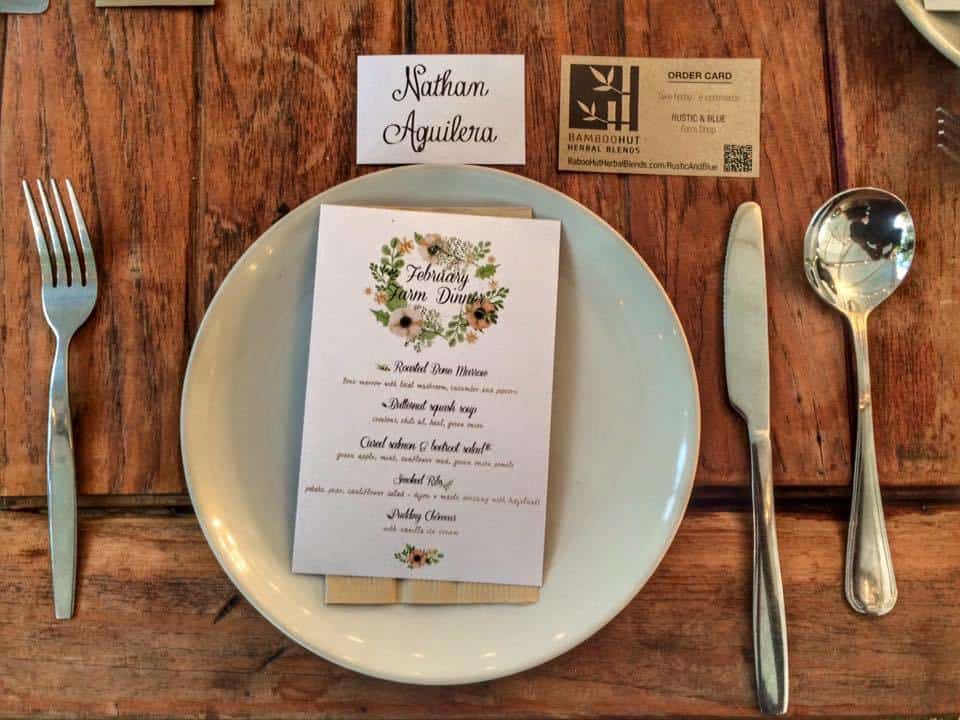 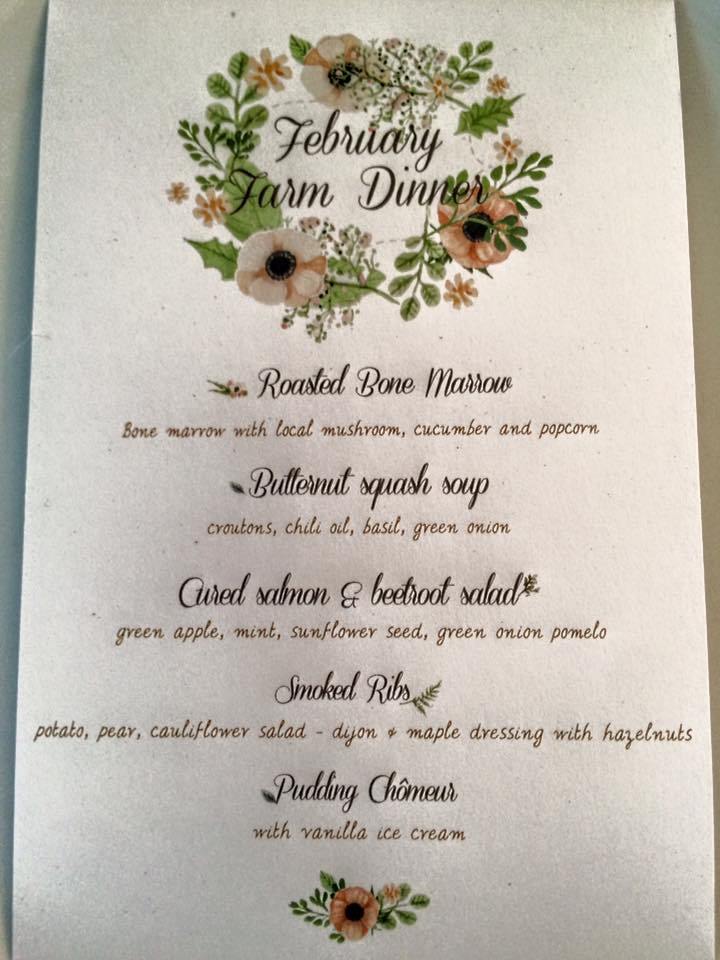 The entire night was really nothing short of perfect. There were two long banquet tables set with place cards, a musician playing soft music in the background, free flowing wine and craft beer, and a group of excited guests. The farm setting with a chandelier hanging from a canopy tent setting over the banquet tables with perfectly mismatched chairs set the tone for the evening. 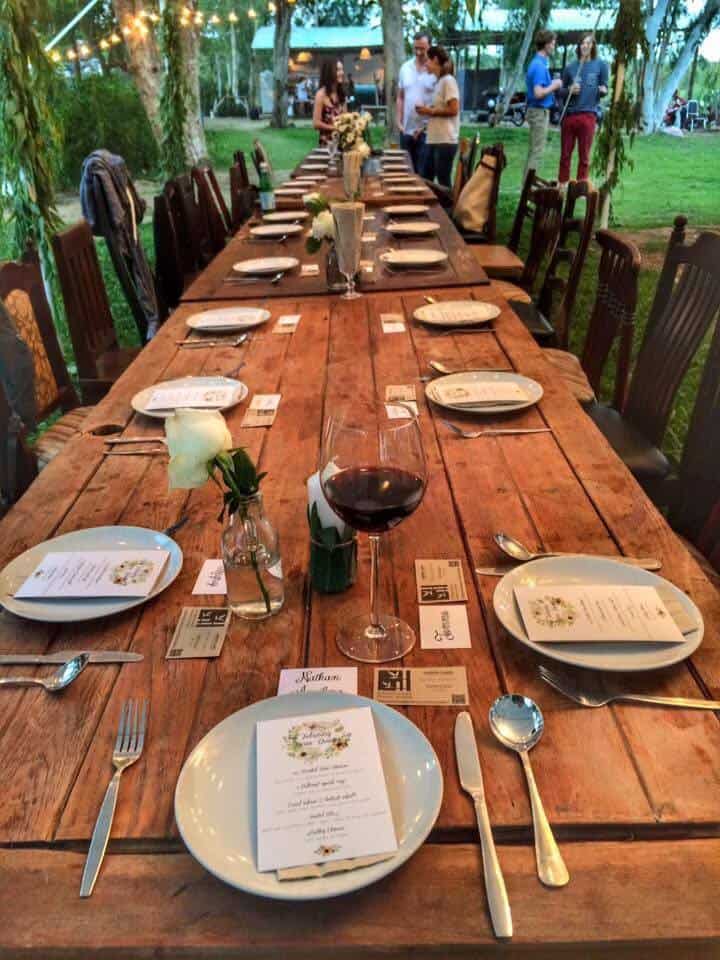 The five course menu had offerings such as roasted bone marrow, cured salmon with a beetroot salad and easily my favorite- the perfectly smoked ribs. The meal was served family style and there options for vegan diners as well. 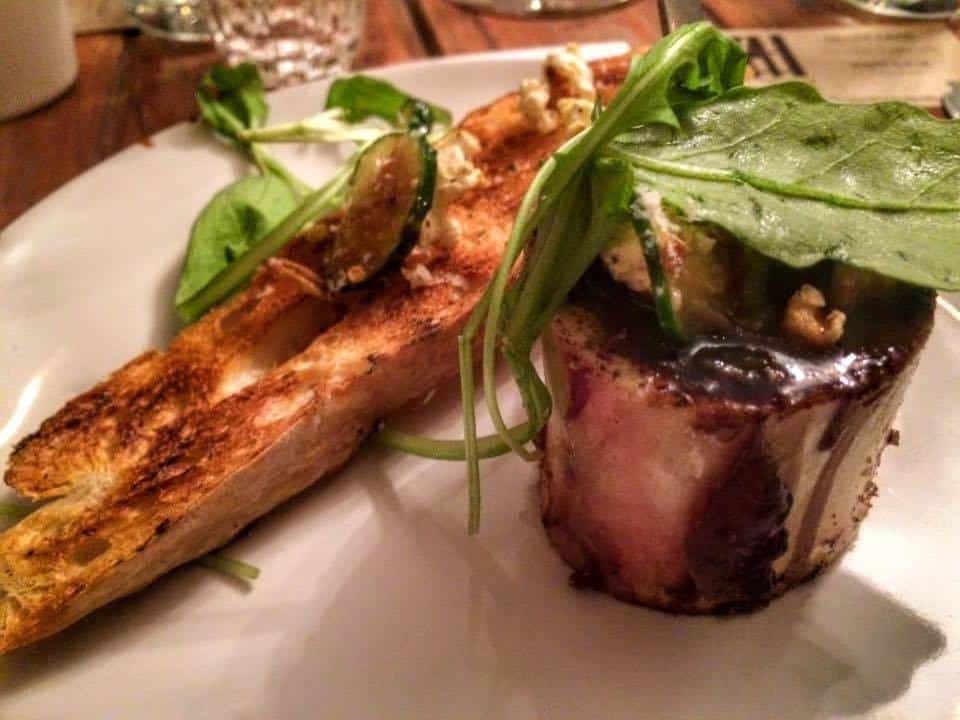 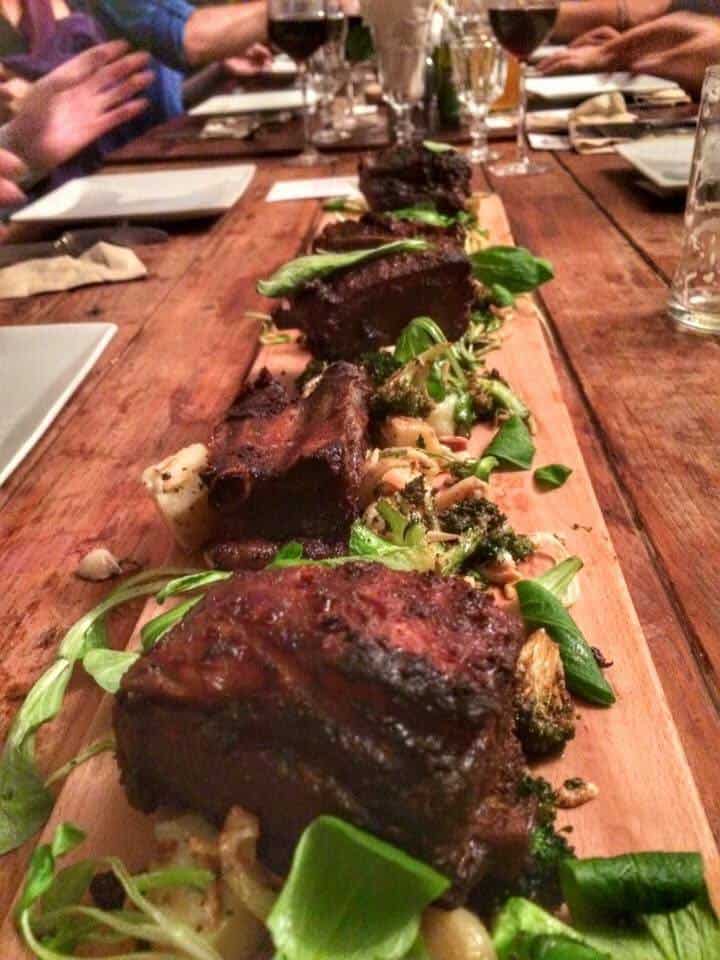 Several weeks later this is meal that my friends and I are still talking about as we patiently await the restaurant to announce their next Farm Feast.

What is your most memorable meal? Let me know in the comments section below! 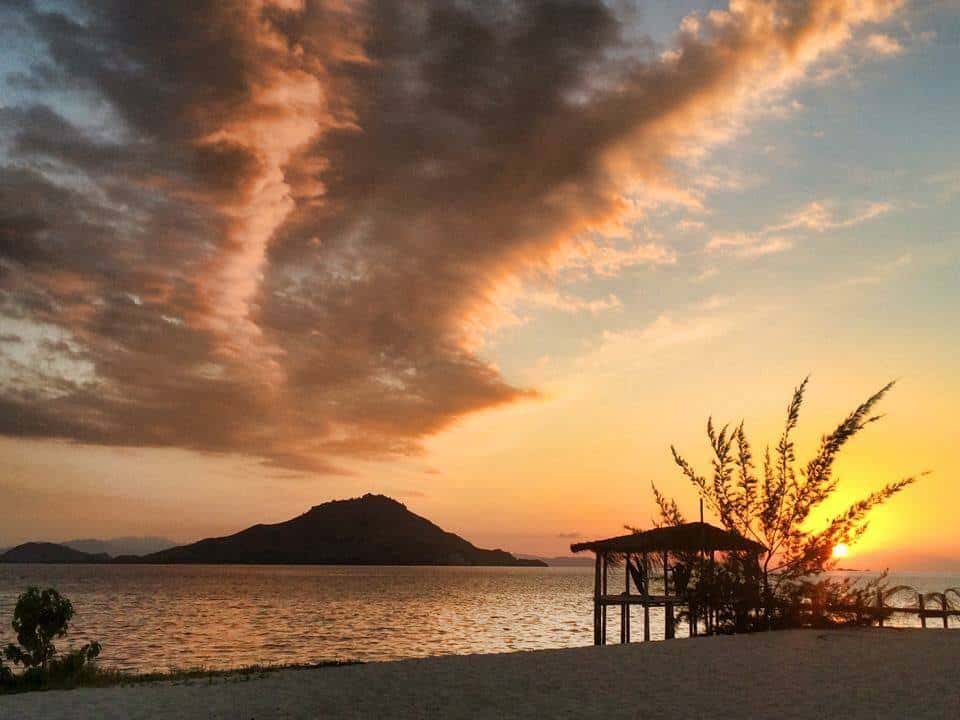 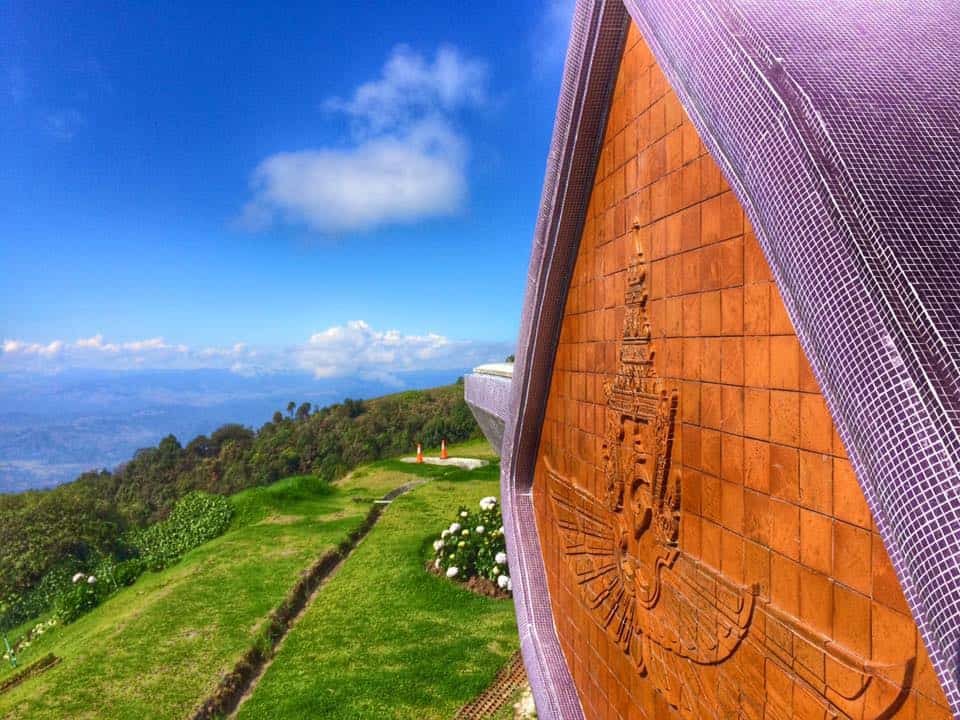 As a travelling foodie, I think you've done an exceptional job at being able to differentiate your awesome meals from your mega-awesome meals! There are some great ones in here. I truly love being able to say "that was the best thing I've ever eaten" and then going somewhere else and being able to say it over and over again. The Croatian birthday feast looks amazing. Think your Morroccan BBQ deserves a place in here too :)

My most memorable moment was trying ceviche for the first time in Lima, Peru. It's essentially raw fish marinated in lime juice and chili peppers, but it's considered a delicacy in Peru and a few other Latin American countries.

Although I enjoy sushi, ceviche is not sushi! I wasn't sure what to expect or how I would handle it, but it was surprisingly pleasant. I highly recommend trying it if you ever get the chance!

I love ceviche! The best ceviche I've ever had was in Santa Teresa, Costa Rica. We went back every day of our trip to have it. I still crave it!