During my time in Budapest, I was fortunate enough to participate in several tours with Taste Hungary, the city’s leading food tour company. On my first day with the Taste Hungary, I joined the Jewish Cuisine Walking Food Tour and later the Essentials of Hungarian Wine Tasting.

This walking food tour of Budapest focuses on the Seventh District, one of the city’s trendiest neighborhoods known for its quirky bars, cool cafés, hidden art galleries, and cutting edge design shops.

Before World War II, this neighborhood held one of Europe’s largest Jewish communities. Today, the neighborhood is still the center of Jewish life in Hungary.

I met the Taste Hungary guides at an easy to locate central meeting point. After meeting the two tour guides, we found out the couple who had planned to join us was sick and not able to make it. This meant I had two tour guides for myself!

I always enjoy solo guided tours, because I don’t have to worry about annoying others by photographing every plate or asking a million questions, as I’m known to do.

Our first stop was for coffee. The guides explained the fascinating history of the neighborhood and  how the food found on the Jewish Cuisine Walking Food Tour was unique.

For instance, all the meat we ate was kosher, meaning it was processed by a ritual slaughterer in accordance with the ancient law of the Torah.

Also, in accordance with Jewish law, meat was not prepared in milk. There are specific instructions dictating how long you must wait between eating meat and milk dishes. They even have to be prepared in separate cooking dishes.

Slightly more educated and on a caffeine high, we set off for our first stop: a traditional Jewish bakery.

There we first sampled pogásca, or a popular savory bread similar to a Hungarian version of the scone. These are so popular that they are mentioned in Hungarian folk tales. When the boy from one story sets off to fight monsters, his mother sends pogáscas with him, as they’re so filling. 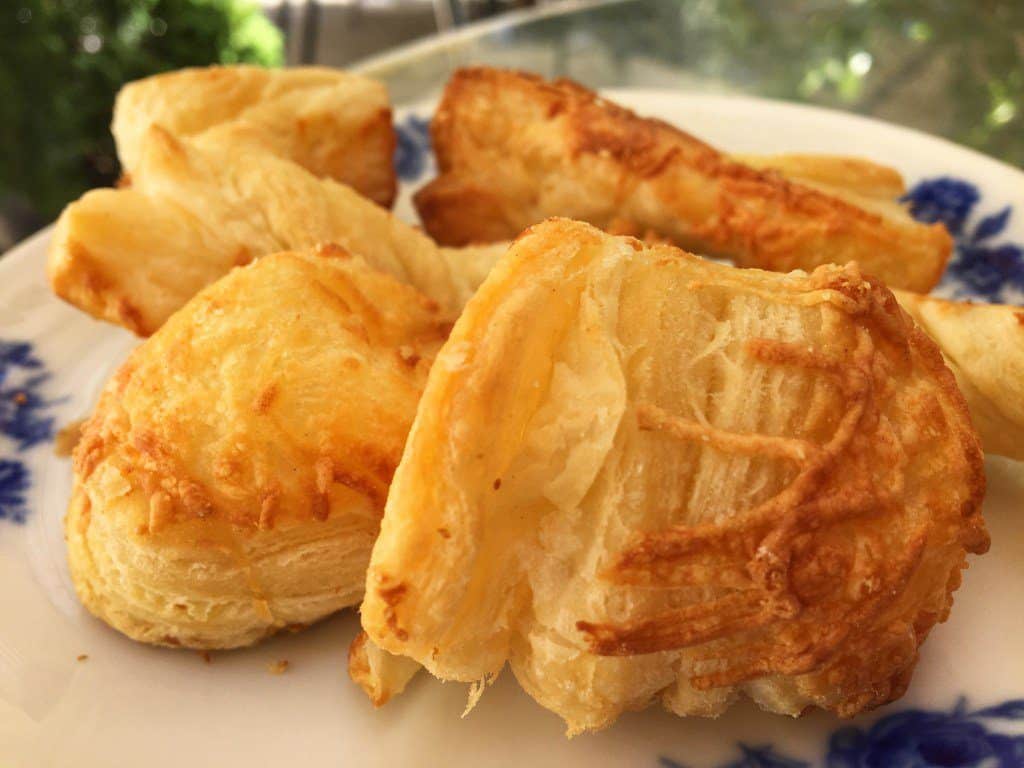 Next we tried a typical Hungarian-Jewish style cake, flodni. This four layer cake has special meaning to those who eat it, and each layer has a different meaning. 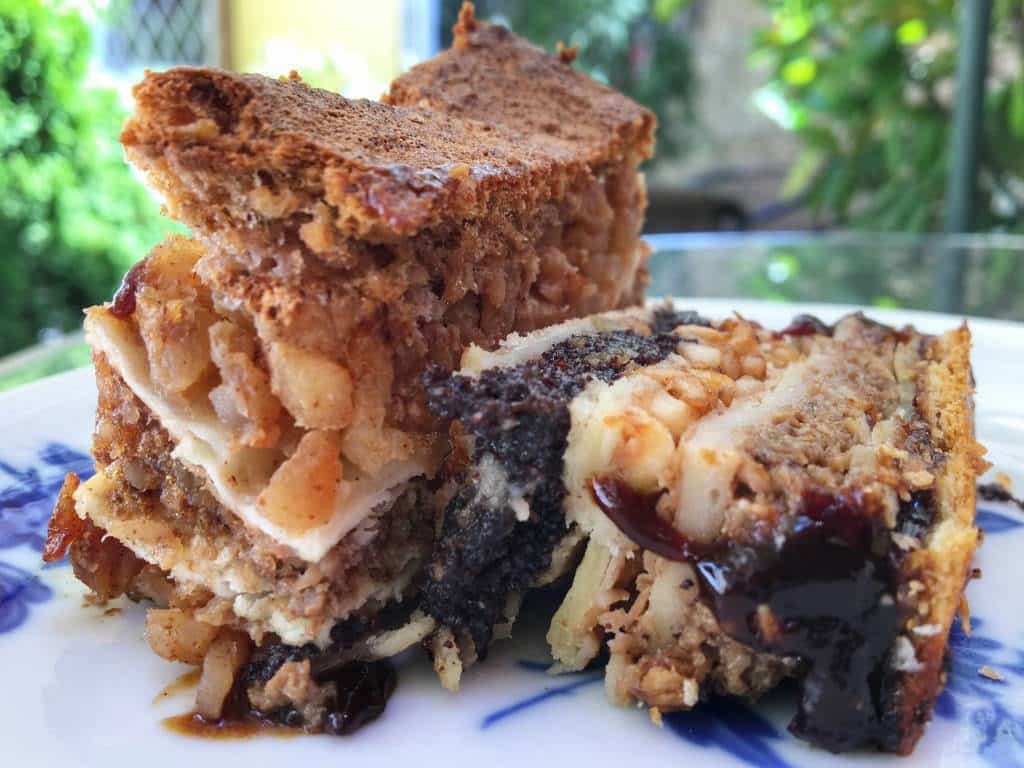 The layer of walnuts is for health, the layer of poppy seeds is in hope of a large family, the sweet layer of honey and apple is to have a sweet new year, and the layer of plum jam– people have forgotten why this is added, but they all agree it should be kept!

Our next stop was in the original and most popular ruin bar in all of Budapest, where we tried a local drink known as Unicum with a few local beers as chasers.

Unicum has a fascinating back story to match it’s interesting taste. The drink, drank as either an apéritif or digestive, is an oak aged herbal liqueur made from a secret recipe containing more than forty herbs. It is actually one of the national drinks of Hungary.

According to legend, the drink was produced in 1790 by the king’s royal physician to aid in indigestion. Upon tasting the unique drink, Emperor Josef II exclaimed “Das ist ein unikum!”, or “That is a unique one,” giving it the name we still use today.

Next, since we had just had our apéritif, we were off to try some traditional Jewish Hungarian cuisine. We stopped inside a restaurant known for serving modern versions of classic dishes.

The first dish delivered to the table was a matzo ball soup in a duck broth. 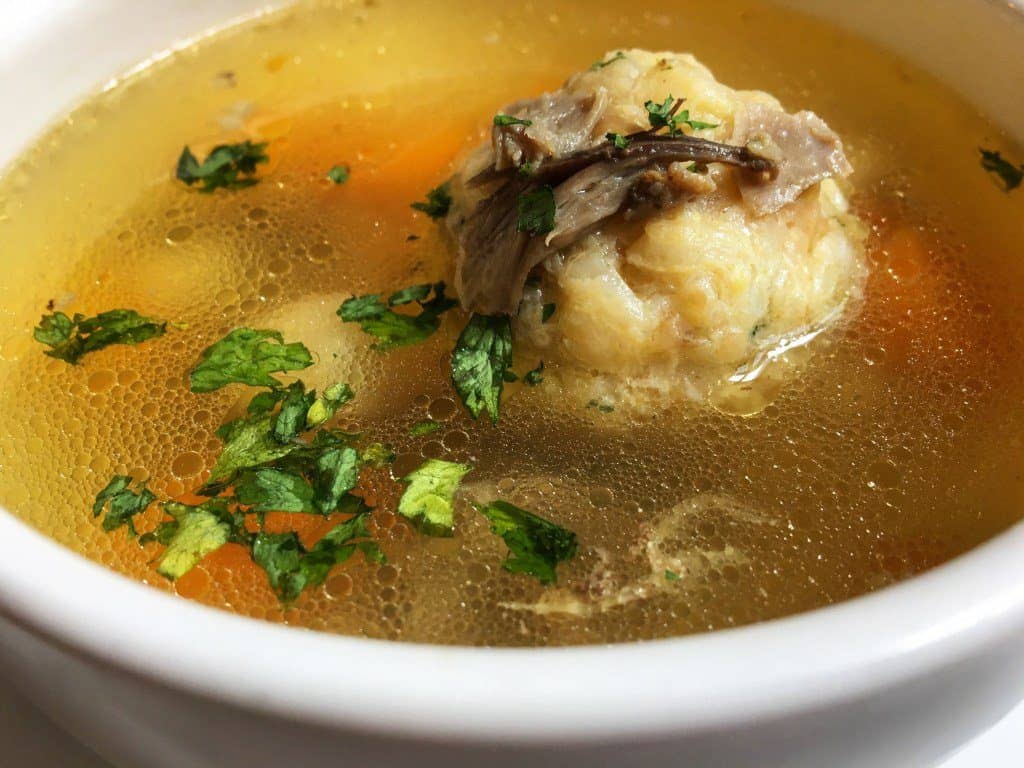 This was delicious– the duck broth was light but flavorful, and the matzo ball was so tender. I loved the bits of duck floating in the soup, they really added to the flavor.

Next was the centerpiece of the meal. On the menu, it was simply described as Jewish baked beans with eggs, so I wasn’t expecting much. 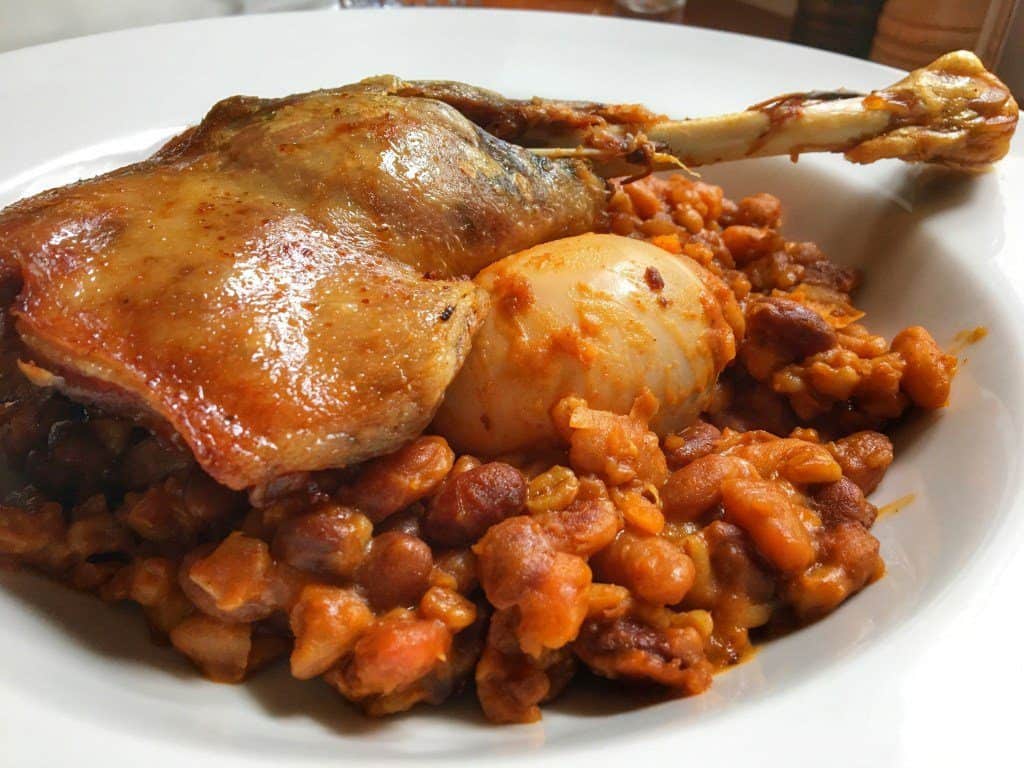 But the menu didn’t mention the huge goose leg served atop the beans.

This dish is known as solet, or also sometimes cholent. It’s a traditional Jewish stew baked overnight for at least 12 hours and served as a Shabbat lunch.

Skin– crispy. Meat– tender. Beans– hearty and full of flavor. I could happily eat this dish weekly for Shabbat!

We finished our tour with a stop at a wine room to try a special dessert wine from the famous Tokai region of Hungary. 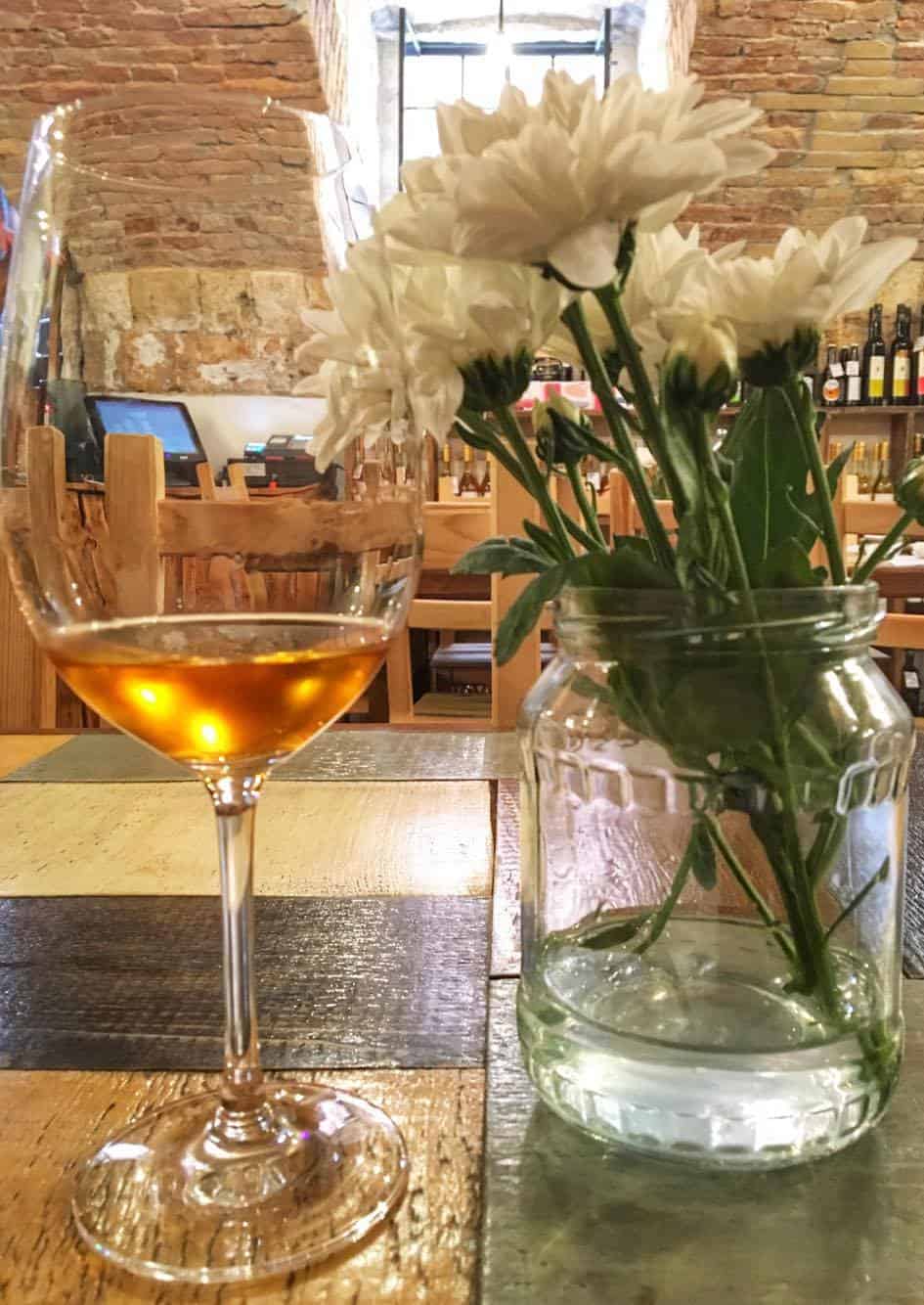 While I’m not much of a dessert whine fan, this one wasn’t bad. It was perhaps a bit too sweet for me, like you’d expect a dessert wine to be. I was happy to try wine from the Tokai region, as it’s world famous.

The dessert wine was the last stop on my Jewish Cuisine Walking Food Tour of Budapest, but ironically this wine house was where my next tour was set to begin in just a few hours.

Fortunately for me, my apartment was just around the block.

I rushed home to  take a quick nap before turning back up a few hours later for my next tour.

Looking for more things to see and do while you’re in town? Check out my guide to the best things to do in Budapest!

The Essentials of Hungarian Wine Tasting is so popular because of the sheer number of Hungarian wine regions: 22 to be specific, with nearly 100 varieties of local grapes!

This course is the perfect introduction or overview to the different types of wine produced in Hungary. Ninety percent of the wines are not exported but rather drank within Hungary!

On the night of the tour, we tried eight different types of wine, including sparkling, red and white. Naturally, we started with the sparkling and white wines. 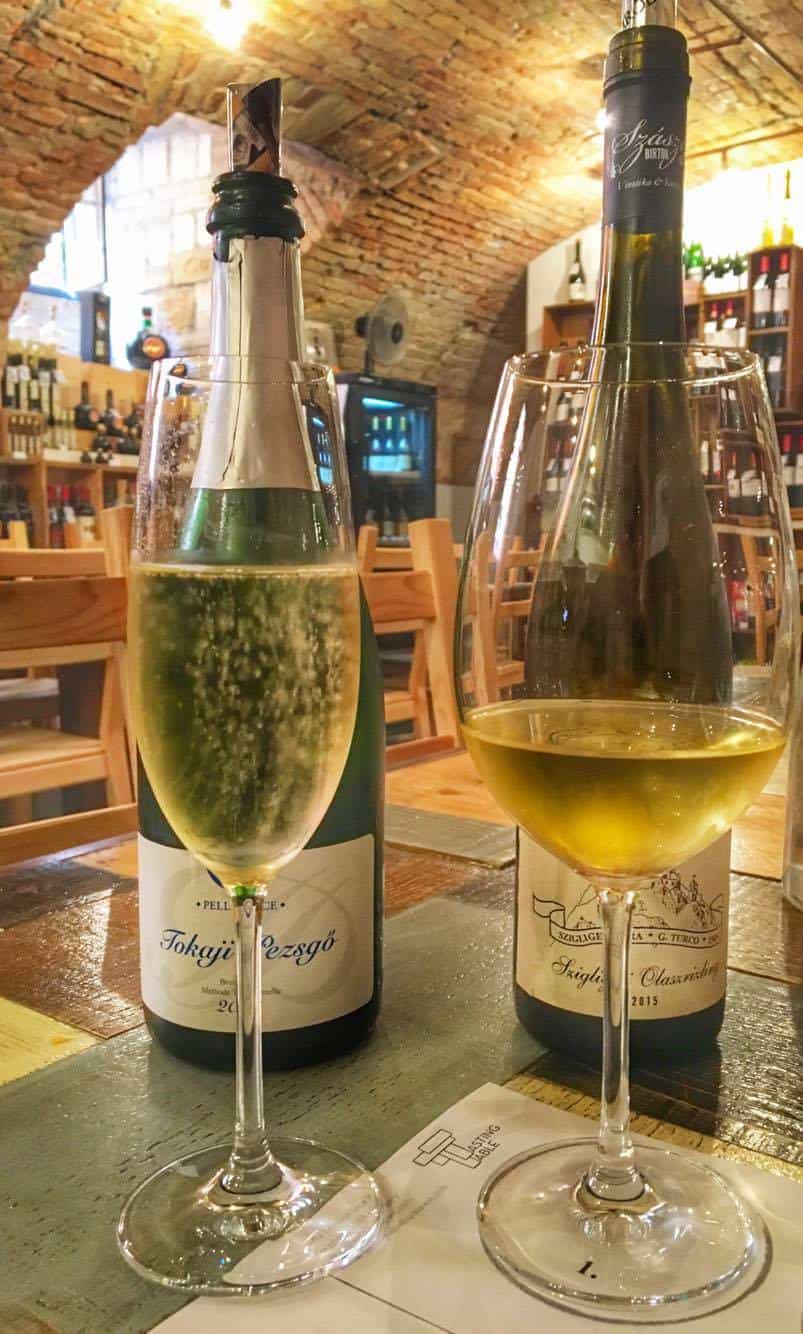 Seventy percent of the wines produced in Hungary are white wines. 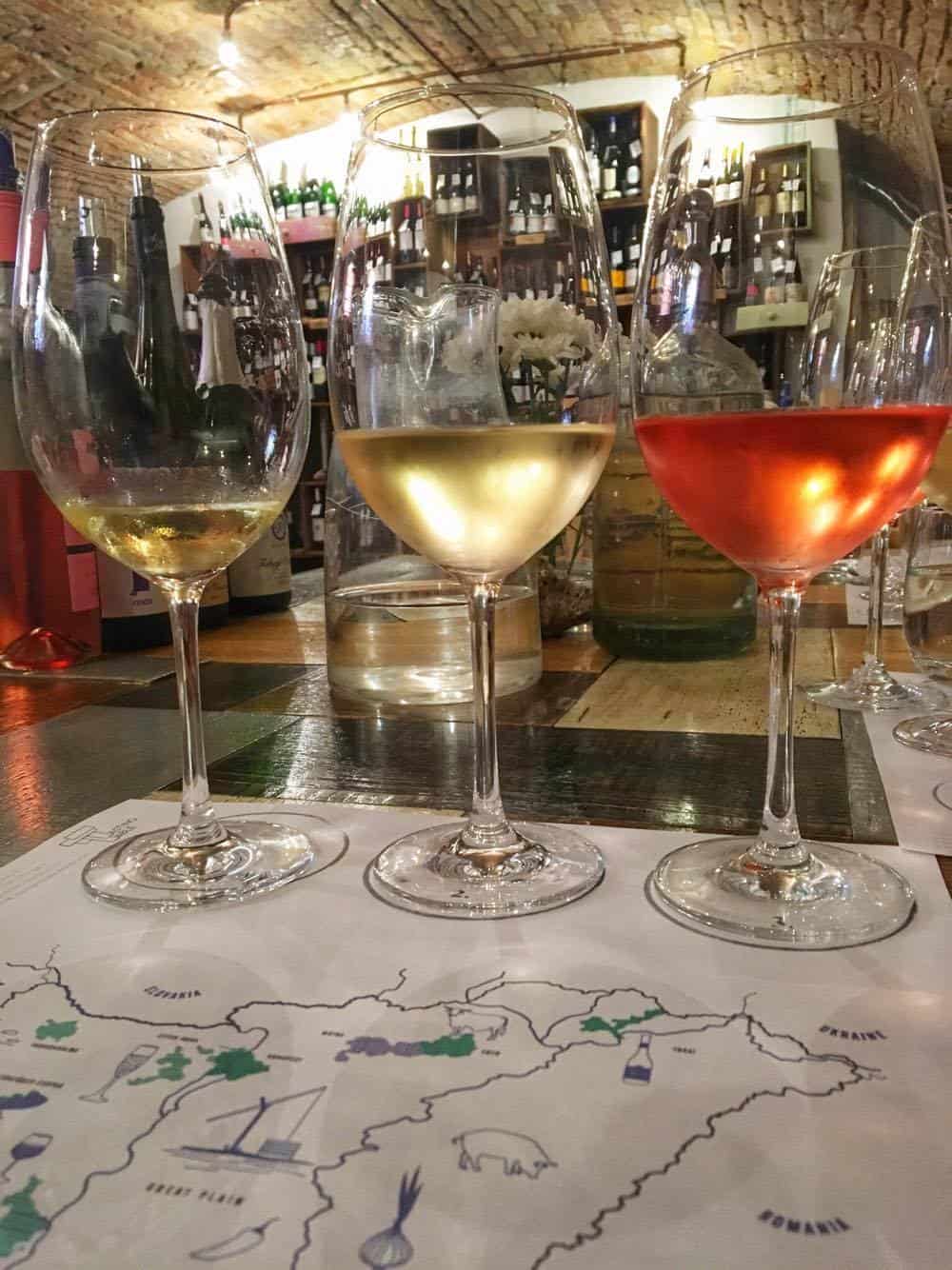 We even tried a delicious white Pinot Noir, which was a first for me. It was richer than most white wines, as it’s made with red grapes. I had never heard of it before this tasting, but I quite enjoyed it!

As we ate, we snacked on individual charcuterie platters that were perfectly paired with the wines we sampled. I especially loved the ash covered cheese in concert with the more robust wines. 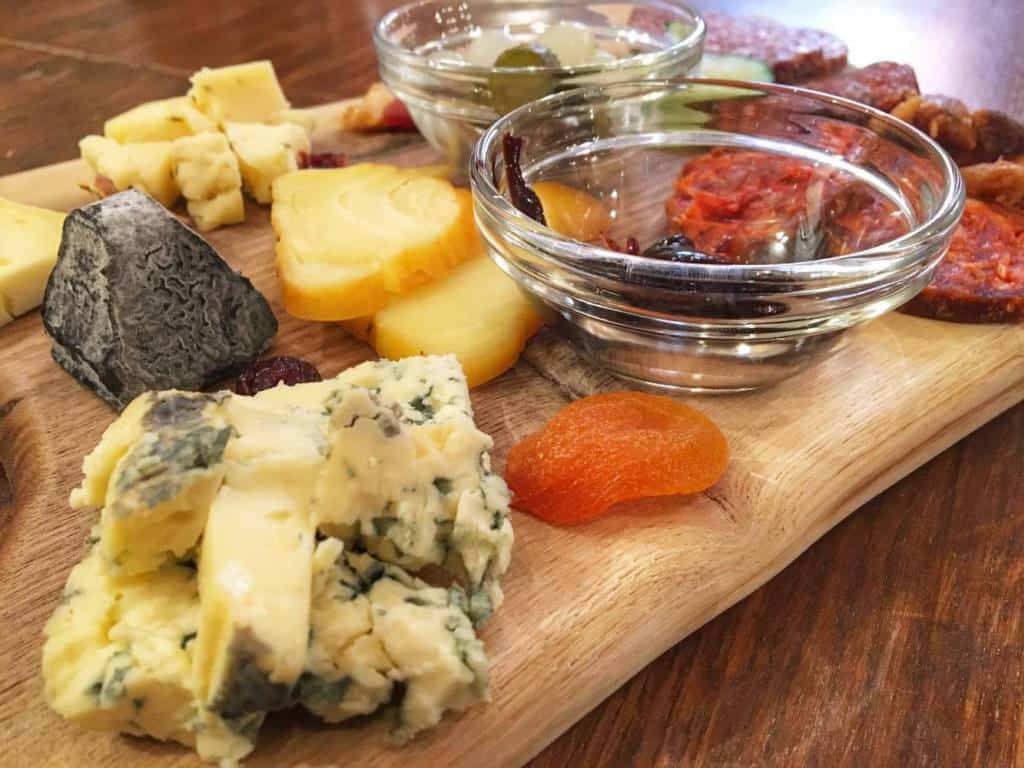 This one was so delicious I had to photograph it from both angles! The meats are all locally sourced and paired really well with the reds we sampled. 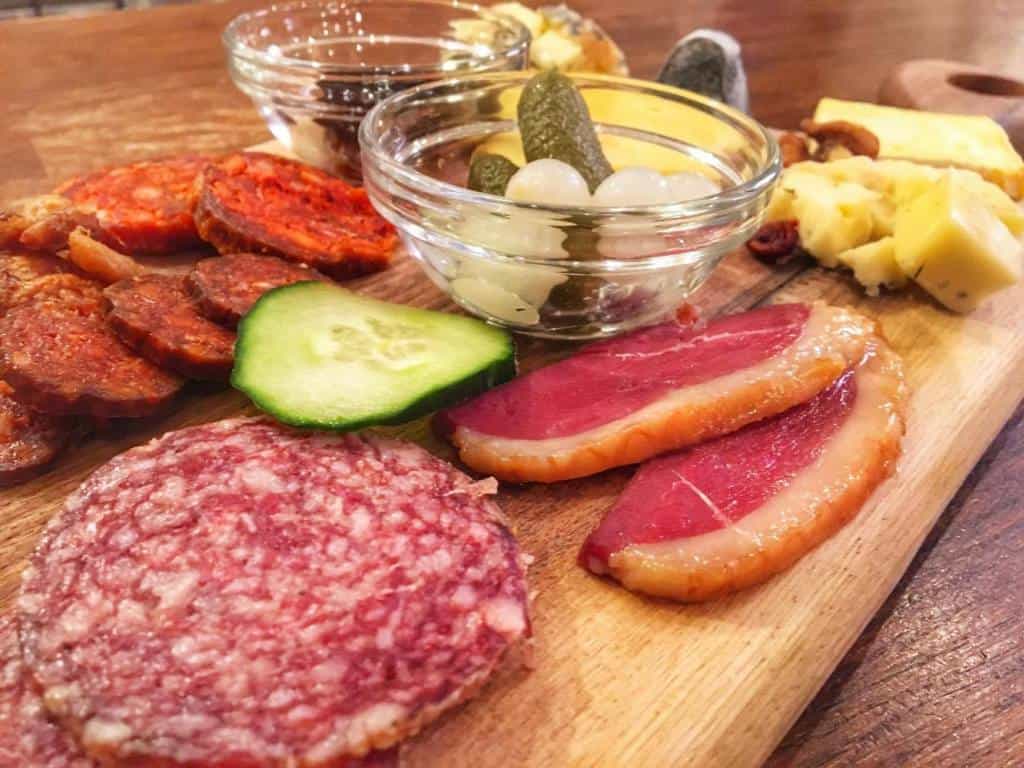 As we sampled each wine and made our way through our charcuterie boards, we learned about the different wine regions and why these specific regions, climate and soil conditions are perfect for producing their particular wines.

We ended the tour by trying another dessert wine from the Tokai region, since our host knew I had sampled a similar one earlier. Maybe it was because of the seven glasses of wine I had already tried, but I liked this one better- it was drier and not as sweet.

Finally, after a full day of touring with Taste Hungary, not only the Jewish Cuisine Walking Food Tour but also the Essentials of Hungarian Wine, I was once again happy that my apartment was just around the corner.

I ended the day with a better understanding of not only Hungary’s Jewish community and their traditions and food, but also of the country’s wine region and the wine variations it produces.

All in all: a pretty perfect day.

Disclaimer: I would like to thank Taste Hungary for having me as a guest on their tours. All opinions remain my own, as usual.

Which tour looked best to you: the Jewish Cuisine Walking Food Tour or the Essentials of Hungarian Wine Tasting? Would you like to do both tours in the same day like me? Let me know in the comments section below! 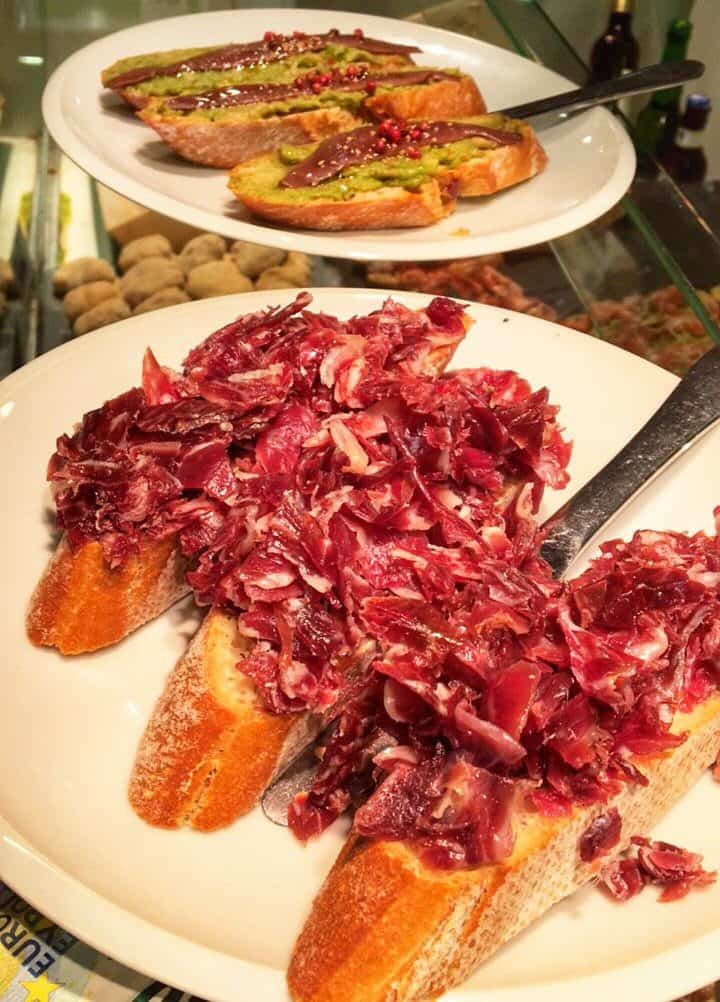 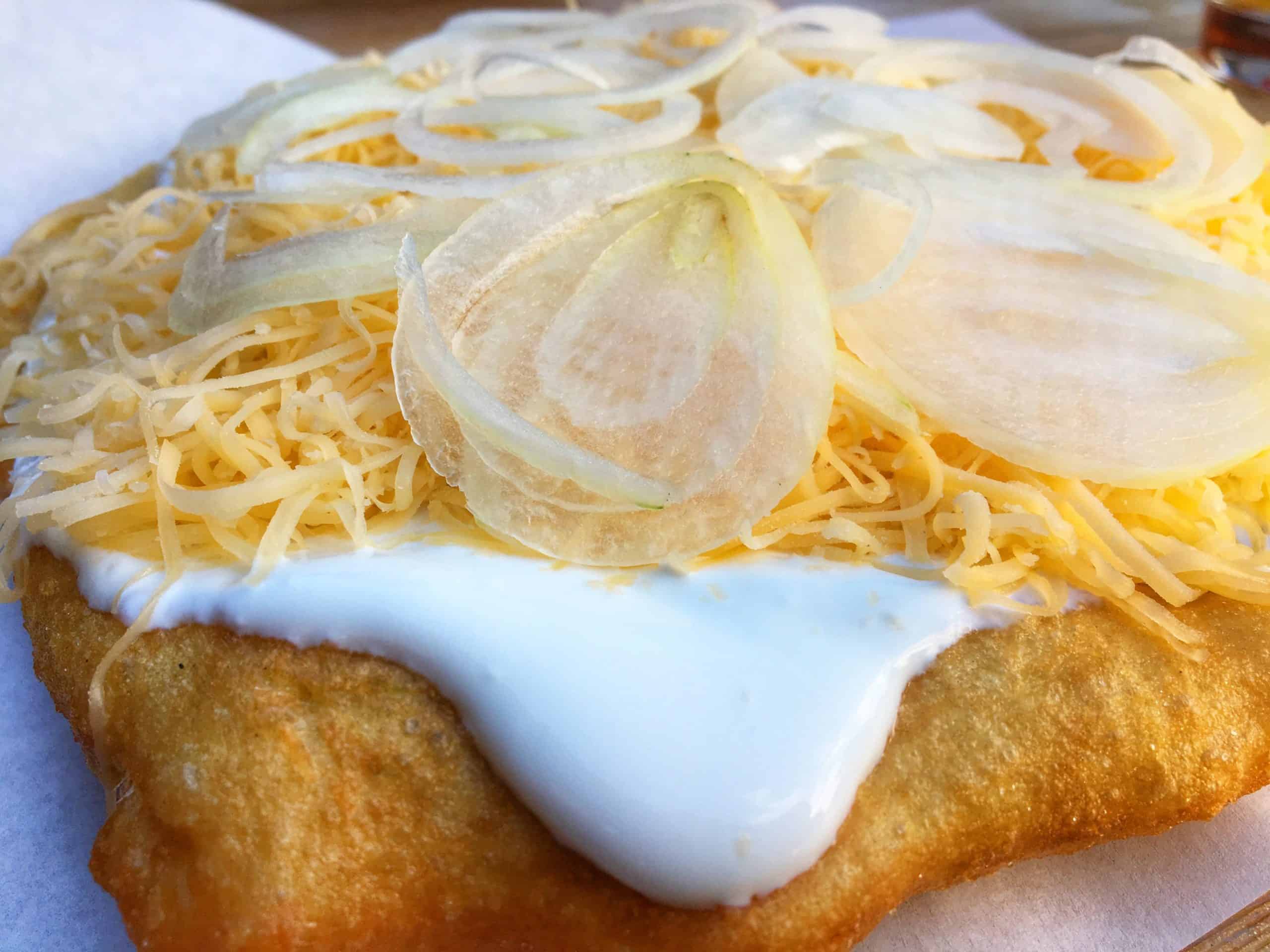 […] recently joining Taste Hungary for their Jewish Cuisine Walking Food Tour, I next joined them for their Buda Food Walk. I met the host and other tour participants at an […]

I think food tours like this would be such a great way to gain a better understanding of the local culture and religion - how fascinating. That food sure does sound delicious especially the massive goose leg!

We've been to the old Jewish district of Budapest a few times. Always a treat. And thanks for the new suggestions.

Feeling seriously hungry after reading this. The food in Budapest looks so rich and filling. Especially the 4 layer cake. Love the story behind it too. Will definitely be trying some of these on our tour of Europe next year.

His hungarian jewish cuisine looks very hearty! Despite all your pictures look fabulous and perfectly matched with great descriptions I think I would have enough after the coffee and first cake, lol