During my recent competition to find America’s next top foodie destination, Costa Mesa, California was nominated by my good friends Bobo and Chichi.  Since we had all lived in Mexico together and I know them to be bona fide foodies, I had full confidence that if they say a place is a foodie destination, then it must be good!

Costa Mesa reached out to me to work together to promote their new #Eatcation. Yes, that’s exactly what it sounds like- a vacation centered around eating! Clearly, I was the perfect person to help them promote this new endeavor! 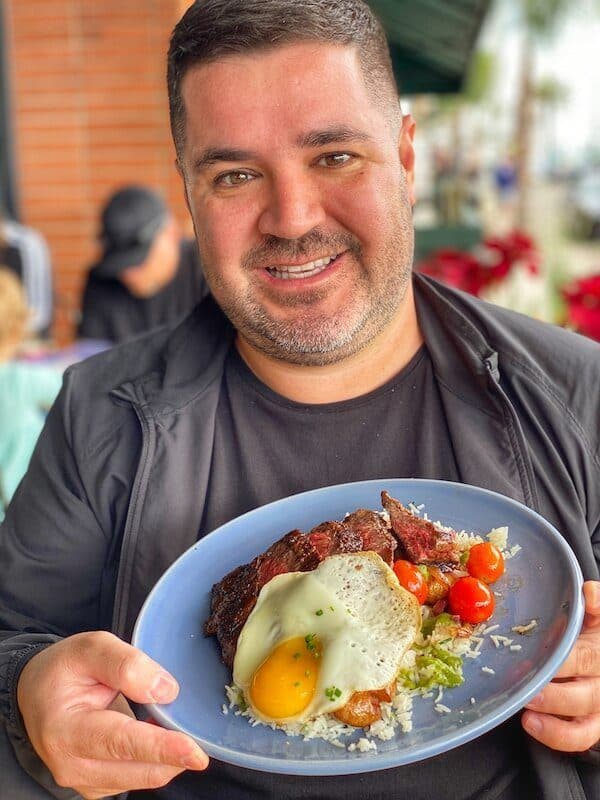 Where is Costa Mesa Anyway?

Costa Mesa, known as the City of the Arts, is located within Orange County, California.

With no traffic, Costa Mesa is only about an hour from LA, but no traffic is not always a given. Many people (myself included) would assume you should just fly into LAX, but there are actually two airports closer, including Orange County’s John Wayne Airport, located just four miles from Costa Mesa!

Sure, flights to LAX might be cheaper, but by the time you factor in the Uber cost, you might be better off using a closer airport. I flew into John Wayne Airport and was at my hotel in about ten minutes. Compare that to the nearly three hours it took us to get back to Costa Mesa after our visit to LA, and it’s enough to make you consider looking at the other airports!

Costa Mesa has a very thorough section of their site dedicated to helping you reach them; you can check that by clicking here.

What Makes Costa Mesa Such a Foodie Destination?

For starters – all the options! Restaurants in Costa Mesa range from hole in the wall favorites to Michelin starred and everything in between! In fact, Costa Mesa is considered the culinary capital of the OC!  Costa Mesa restaurants have won many awards, both locally and nationally.

As I mentioned in my guide to the best restaurants in Costa Mesa, you’ll quickly discover that Costa Mesa has a very distinct mall culture. Many, if not most, of the best Costa Mesa restaurants are in malls or shopping centers. But don’t let that dissuade you! As Costa Mesa is located in California, restaurants have great access to some of the freshest produce available anywhere- and it shows on their menus!

I was also impressed with the variety of foods available in Costa Mesa. During my stay, I sampled California style BBQ (I swear it’s a thing and I swear it’s delicious), Japanese dishes, Latin brunches, Hawaiin donuts, incredibly authentic Italian food, award-winning milkshakes, craft beer, all the Tex- Mex, and so much more!

Costa Mesa is so famous for the ramen restaurants that they have an area known as Ramen Row! I’m dying to get back to Costa Mesa soon to make an entire trip just out of eating my way through Ramen Row.

Best Things to Do in Costa Mesa:

Besides the fact that Costa Mesa is a world-class food city, there’s also much to do in Costa Mesa. In the short time I was in Costa Mesa, I managed to fit quite a bit in.

You can start by completing the Costa Mesa Art Walk, as it’s free and a great way to get familiar with downtown Costa Mesa. Be sure to stop and take in Noguchi Garden during your art walk. 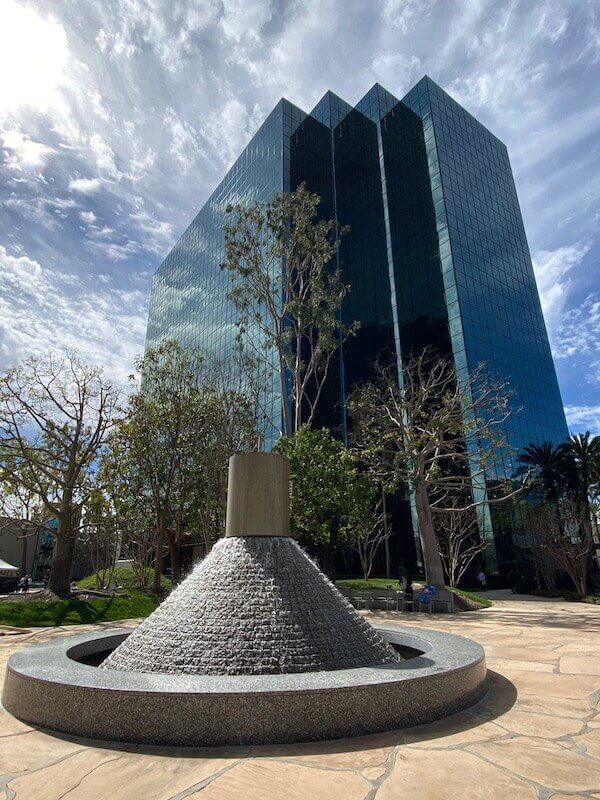 Noguchi Garden is a minimalist sculpture garden representing the state of California. I loved the water feature that ran throughout. Also, on Fridays, food trucks set up in the garden from 10-2 and I was kicking myself for already having lunch plans because everything they were grilling up looked amazing!

Also, two locations you’ll quickly become familiar with during your time in Costa Mesa are The LAB and The Camp. Both The LAB and The Camp offer shopping and dining and are, in fact, located very near to one another. I walked between the two of them.

The LAB (Little American Business) is meant to serve as an anti-mall, solely focusing on small local businesses. 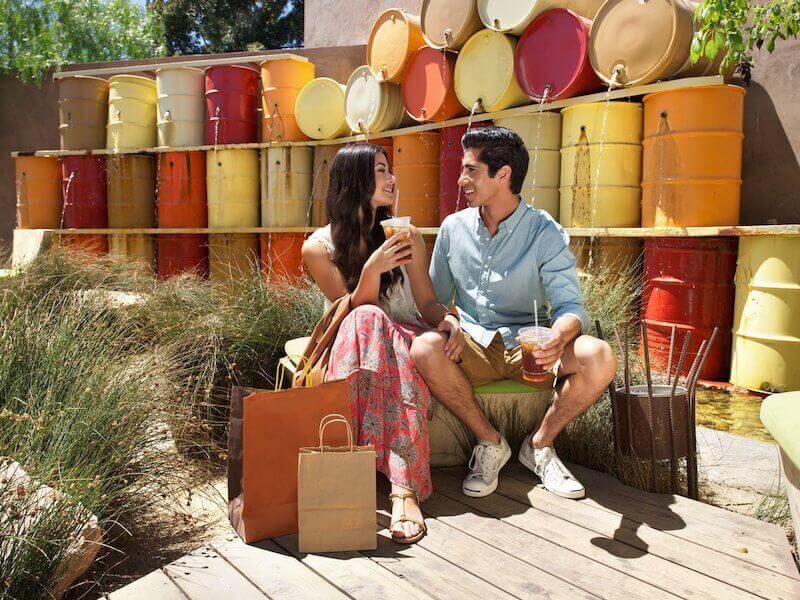 In The LAB you can find everything from coffee and donut shops to clothing stores, and even a record shop! 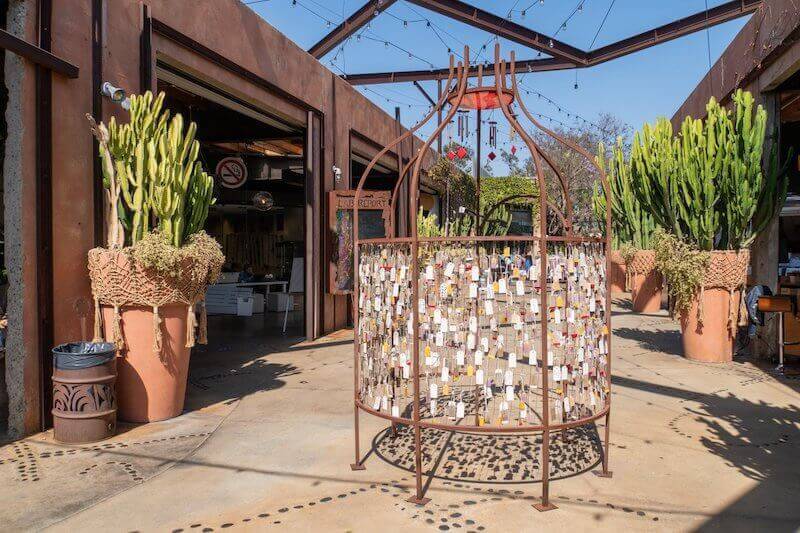 The Camp describes itself as a “green, eco-friendly, retail campus dedicated to an active, healthy lifestyle mindful of environmentalism and supportive of the local community.” 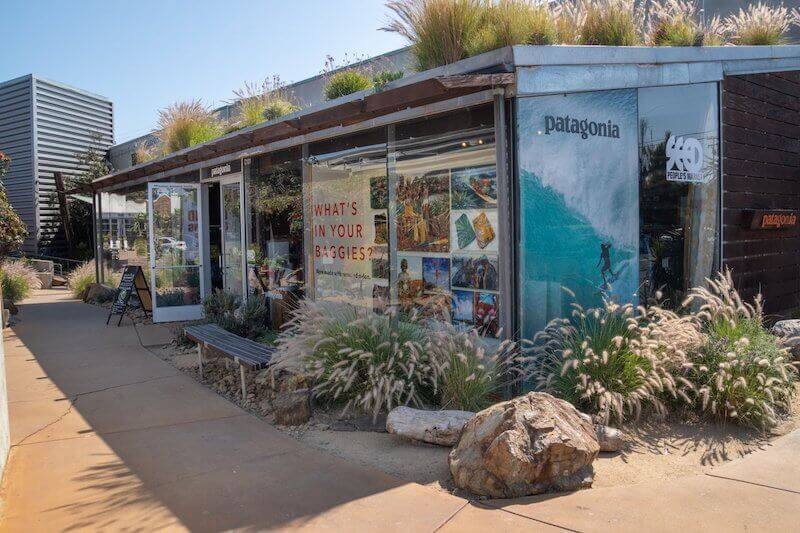 The Camp is full of interesting shops and restaurants and would be a great place to meet friends to spend time shopping before stopping for lunch or an afternoon cocktail. 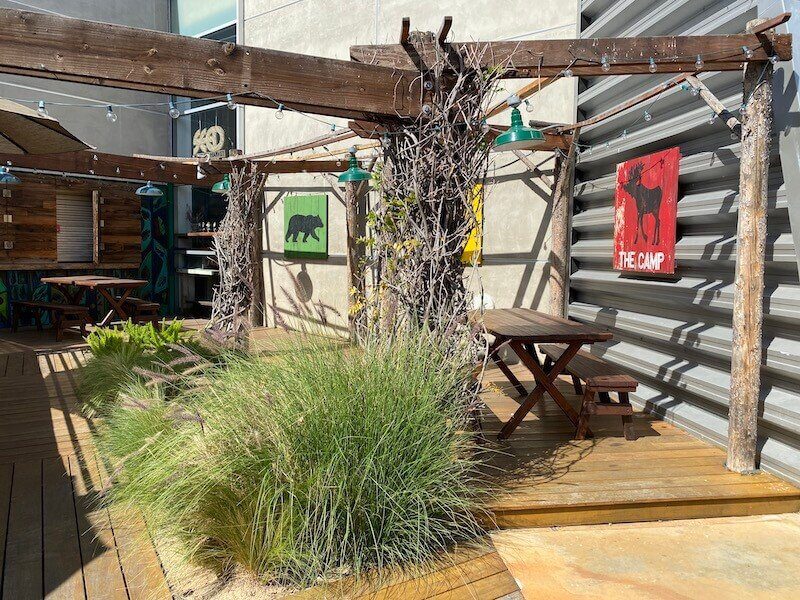 Also, you’ll want to become familiar with SOCO, a dining and culinary experience with over seventy design showrooms and restaurants. Within SOCO you’ll find The OC Mix, one of the most acclaimed shopping and food halls in Southern California. The center also holds Taco Maria – one of the two Michelin starred restaurants found in Costa Mesa.

Take a break from shopping to stop into We Olive & Wine Bar for a glass of wine and small bites. There’s a cheese shop that sits opposite We Olive that does some impressive cheese plates and charcuterie boards that I hope to try next time I visit. 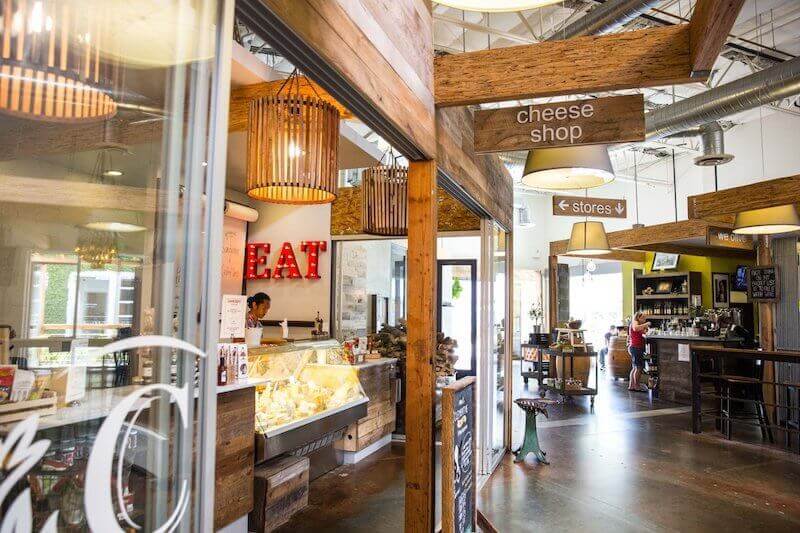 And then there’s South Coast Plaza, the polar opposite of The LAB and The Camp. 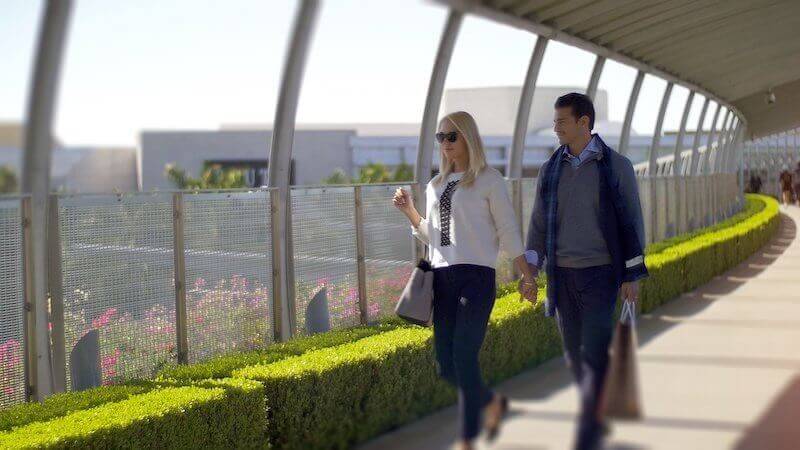 South Coast Plaza is the largest shopping center on the West Coast, and their retail sales of more than 1.5 billion (that’s billion with a B!) dollars annually are the highest in the United States.

Nearly twenty-four million people a year shop the massive mall. South Coast Plaza has more than two hundred fifty boutiques, including every major designer you can think of and likely many new ones for you to discover. You’ll find all the major designers such as Armani, Prada, Dolce & Gabbana, Fendi, and Gucci. 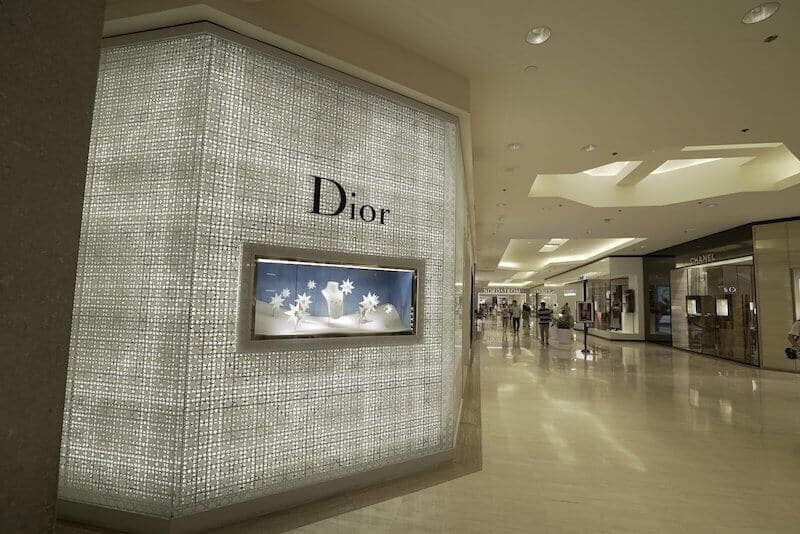 Located very near South Coast Plaza is the Orange County Museum of Art or the OCMA as it’s better known as. 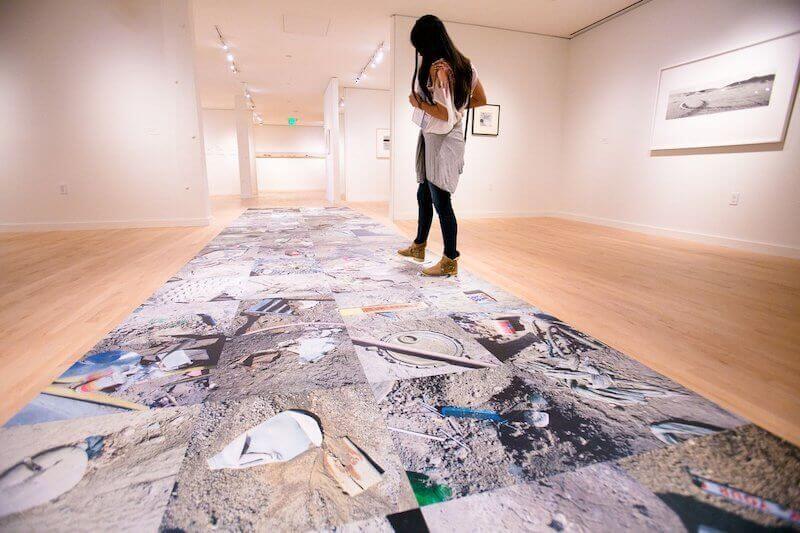 The museum is small but held several interesting exhibits and the design of the museum itself was impressive. 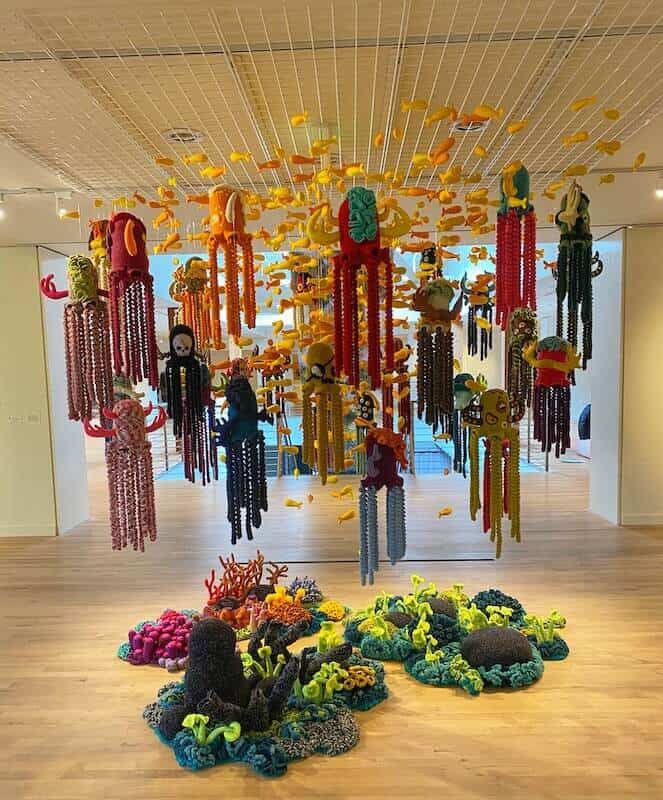 The OCMA makes a great post-brunch, pre-shopping stop for you to get some culture in before you hit the mall! 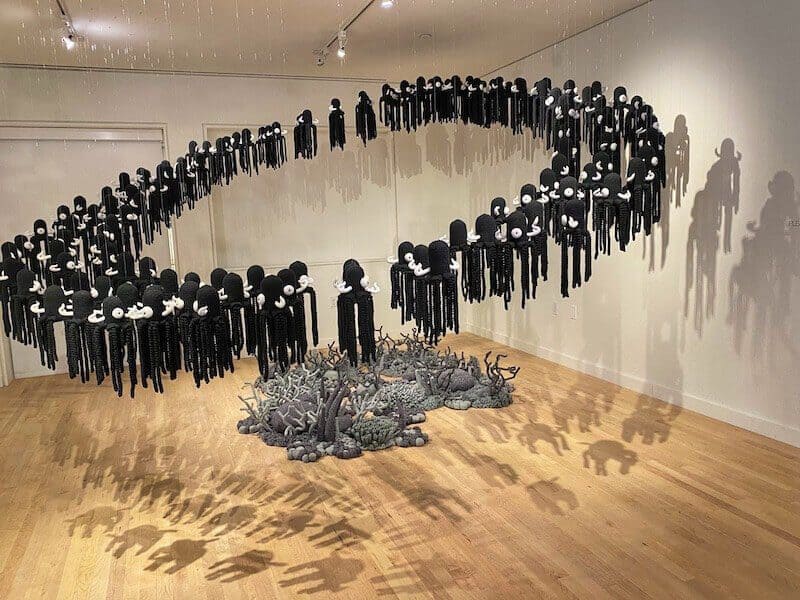 In 2021, the museum will move from its existing temporary location to the Segerstrom Center for the Arts campus in a brand new, 52,000 square-foot building featuring a rooftop sculpture garden. You can click here to read more about the new building.

I had heard about the food scene in Costa Mesa, but I didn’t know anything about their awesome craft breweries until I arrived. Costa Mesa has an impressive collection of craft breweries and many of the best ones are located withing walking distance of one another! This means that you can organize your own impromptu beer tasting or pub crawl. 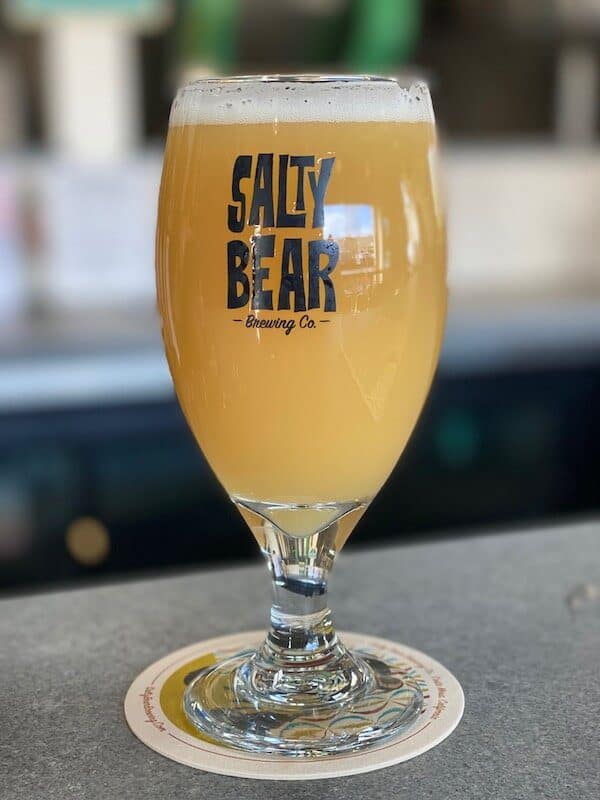 I managed to try brews from both Gunwhale Ales and Salty Bear during my visit. I especially loved the West Coast IPA from Gunwhale’s and the Hazy Citrus IPA from Salty Bear. On my next visit, I hope to try Bootlegger’s and Greencheek breweries, as they are also both located nearby and well recommended.

Where to Stay in Costa Mesa

I was lucky enough to be hosted by the Crowne Plaza hotel in Costa Mesa. The hotel is perfectly located- in fact I was able to walk to most of the shopping centers and restaurants that I mentioned in the post.

You can walk to The LAB, The CAMP, South Coast Plaza,  and many of the restaurants listed above. I was also able to walk to Noguchi Gardens. You’ll need an Uber to get to SOCO and the OC Mix but because of the central location, Uber rides are quick and relatively cheap. 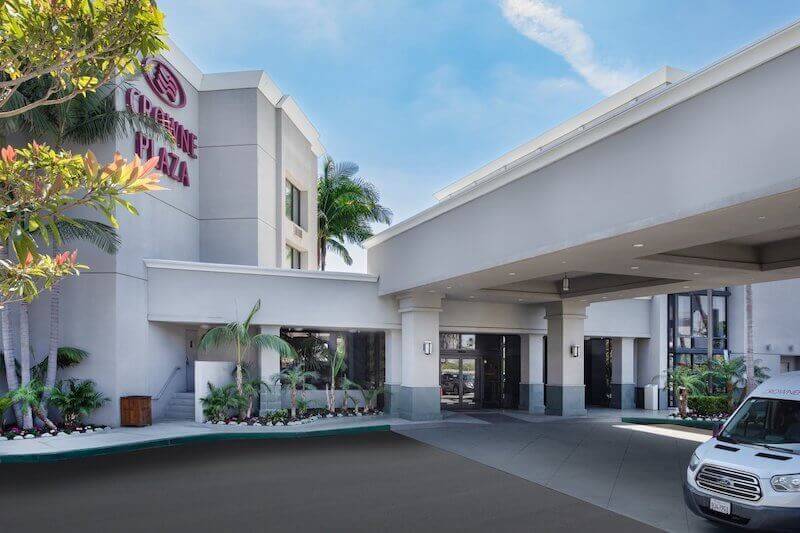 My room was large and comfortable and the staff was incredibly helpful, even signing for and holding a bunch of incoming deliveries for me. By my second day there many of the staff greeted me by name and were always eager to help. To book your own room visit the hotel’s website directly by clicking here or you can check today’s best rates on Booking.com by using the search tool below.
Booking.com


I hope after reading about all there is to see, do, and eat in Costa Mesa that you’ll agree with me that this is a perfect destination for foodies!

I truly enjoyed my time in Costa Mesa, and hope to make it back as soon as possible to bring you more foodie finds from this hidden Southern Californian gem!

Which of these things to do in Costa Mesa do you most want to experience? Let me know in the comments section below!

Disclaimer: I would like to thank Travel Costa Mesa and the Crowne Plaza Hotel for hosting me during my visit. All opinions remain my own, as usual.

[…] other cities in Orange County? Check out this post detailing my recent visit to Costa Mesa or this post where I share with you my favorite Costa Mesa […]