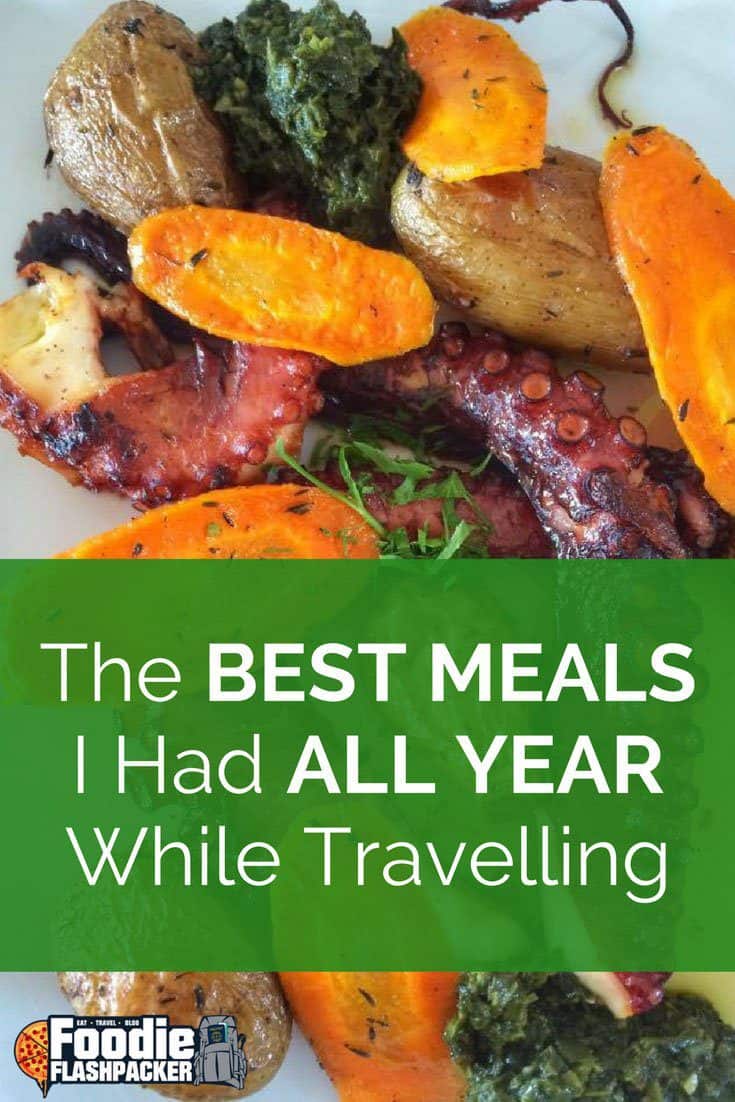 2016 was an insanely great travel year. This past year I spent time in nearly twenty different countries- revisiting some of my favorites and also exploring new destinations.

Yes, I saw some cool stuff, and, as always, I met some phenomenal new and interesting people. But, most importantly, what about the food?

The Republic of Georgia-

I took this trip on a whim. I had some good friends there that said the wine was good, and I was able to find a cheap flight. That’s really all I needed to know. When I got there, I was blown away by how great both the food and wine are.

Georgia is known for it’s wine, perhaps not known well enough, but known. The country actually has the longest recorded history of wine production in the world, dating back to 8000 B.C. Needless to say, in all that time, they’ve perfected the art. Many people actually consider Georgia the birthplace of wine.

But what I didn’t expect was how great the food was going to be.

My favorite Georgian dish, and one that I ate near daily, was giant soup filled dumplings known as khinkali. Fillings can vary by region but they’re usually a mixture of beef and pork with onions, chili and cumin. This mix is folded into a dumpling with a thick knot at the top that you use to hold while you take the first bite, where you’ll suck out the soup inside. Served either steamed or deep-fried, usually sprinkled with black pepper, and always eaten only with your hands, this is a dish I still think about months later.

This is a different version of the khinkali than I’m used to- this one is deep fried. #khinkali are dumplings generally filled with a mixture of beef and pork and also a soup that is made from the meat juices during the cooking process. These were delicious but I actually prefer the classic version.

If you’ve been following my blog, you know that I fell hard for Lviv this past summer. I still haven’t stopped talking about it. Lviv has the feel of Western Europe at some of the best prices of Eastern Europe. So much to see and do, and so much amazing, incredibly affordable food. Of all the meals I had in Lviv, this T-bone steak with dill butter and cranberry sauce is the most memorable. It’s also one of the most photogenic plates of food I’ve had in a long time.

The Azores of Portugal-

Is it cheating if I include everything I ate while in the Azores? Do I have to narrow it down to just one meal? It’s my blog, I’ll do what I want! Seriously, for seafood lovers the Azores is a dream destination. And since the islands are located in the middle of the Atlantic halfway between Europe and the U.S., this makes great sense. If I had to narrow it down to just one meal, it would be this plate of perfectly roasted octopus.

The best meal I’ve had since I arrived in #Portugal– roasted octopus with vegetables. It was fork tender and had amazing flavor.

To find out more about Azorean foods click here.

Brunches are one of those things I miss most from home. In many parts of Asia, brunch just isn’t a thing. Not so in Chiang Mai. Because Chiang Mai is home to so many expats, there are tons of great restaurants serving Western and Asian-Western fusion dishes.

Sunday #brunch at @rusticandblue: the brekkie stack. #frenchtoast, #bacon, sausage & a fried egg with a side of syrup. So delicious.

I knew the food in Hong Kong wouldn’t disappoint, and I was right. While my first impressions of the city were mixed, from my first bite, the food was a solid yes. Nothing was better than the dim sum stalls we found on the walking food tour I joined during my visit. The small plates were meant for sharing, so I got to try a bite of everything- Asian tapas if you will.

Click on the link in my bio to read all about my walking #food tour of #hongkong. Photo credit: @eating_adventures

This is another place where I’m once again tempted to say “everything I ate while I was there.” I returned to Turkey the second time this year, and I stand firm in my opinion that Turkish food is one of the most underrated cuisines in the world. At home we think of kebabs as Turkish food, but there is so much more! Turkish food really varies by region, and they have an entire mezze (appetizers) culture built around drinking!

This is my second visit to #turkey and I just found out that I’ve been committing a big faux pas by calling this #turkish #pizza. It is in fact #lahmacun and possibly predates pizza. Minced meat, garlic, onion and spices atop a thin layer of chewy bread are quickly cooked in a wood burning oven to create this delicious meal. Before serving you squeeze with fresh lemon and top with parsley. Special thanks to @culinarybackstreets for having me on their amazing tour. I learned so much about the history of the city and tried more dishes than I can count. Contact them when you’re planning your visit to #istanbul to book your own #foodie walking tour!

Moroccan food is another overlooked cuisine. At home we tend to think of Moroccan food as only tagine. I learned how mistaken I was when I joined the walking food tour of Marrakech. The food is so varied, and so much history lies behind each dish. I would love to return to Morocco to try more of this unique cuisine!

Last but not least, this one is probably no surprise if you’ve been following my blog- the charcuterie platter I had in Pisa Italy easily beat out the competition as my best meal of 2016. I supposed it would be more accurate to say the platter was the best meal(s) I had last year, because I ate it twice. In a week. No shame. I don’t know if I could say anything else about this meal that I didn’t already say when I wrote about it here. It was nothing short of perfection. Local meats and cheeses, fresh breads, house wine, all while sitting under the Tuscan sun and having an out of body moment eating the entire platter myself. Don’t be surprised when you see this same dish on my Best Meal of 2017 list- I’m positive that I’ll be going back for this one!

If you find yourself constantly wondering what I’ve eaten today click here to start following me on Instagram, calorie for calorie.

If you enjoyed this post please consider pinning it! 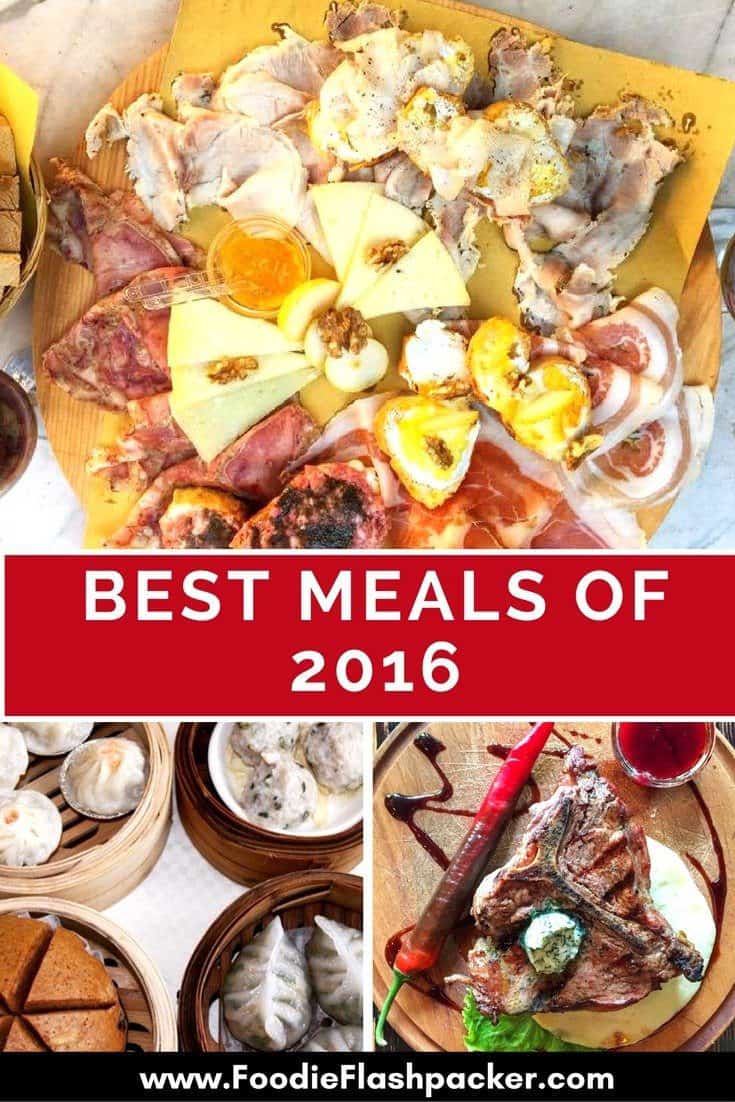 Was there one meal from last year that stood out for you from all the rest? Let me know what it was in the comments section below!

Yummm. Love seein' good ol' Rustic and Blue on there, since we've drooled over it together. Super curious about things that are new to us, like Georgia. Hmm!

You have to come back-- so many new places to try! I found a place that makes pasta to order-- it's insane!

You have some great ones here and many I think I would add to my list - if I had one - but the Moroccan BBQ is the food experience of yours I remember those most from 2016. That was just amazing.

I wonder what meals 2017 will bring... :) Nice photos and big fun of khinkali (form the photo so far but soon we'll change it!)

I hope you get to try it soon! It really is amazing- I was so addicted to them the entire time I was there.

The Dim Sum looks amazing. The octopus, not so much, I've never been able to eat anything like that. Perhaps I'm missing out!

Well my gosh. I flipping love food and I loved checking out yours. How delicious! Ommmm nom nom nom nom :)

Thank you! I appreciate you saying that.