What is Traditional Croatian Food? | 9 Croatian Dishes That You Need to Try!

Traveling to Croatia and not sure which foods to try there? Check out this post detailing the most popular traditional Croatian dishes, from all over the country! Whether you are on the road or jumping from island to island, we have got you covered!

Intrigued? Read on to find out which foods you must try while you are in Croatia! 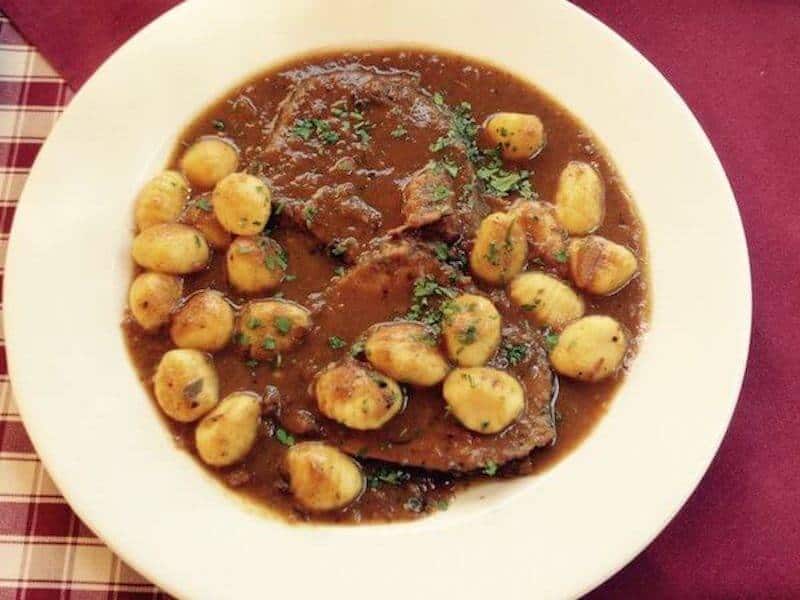 Pašticada is a traditional Dalmatian course, and you must try it if you’re ever in the region. Even though the dish is most popular in the seaside region, it does not include any fish or seafood, which is quite interesting.

In fact, pašticada is made with beef and potatoes and served in a very special sauce. The dish requires meticulous preparation – first, the beef is stuffed with garlic, bacon, and carrots. Then it is left to marinate overnight in vinegar. The next day it is roasted with spices and vegetables – prunes, tomato paste, onions, etc. The cooking of the meat can take up to five hours, depending on how thick the meat is.

When the meat is done, all of the vegetables that it was cooking with are blended into a thick flavorful sauce. Pašticada is usually served in a deep plate with roasted potatoes or gnocchi. 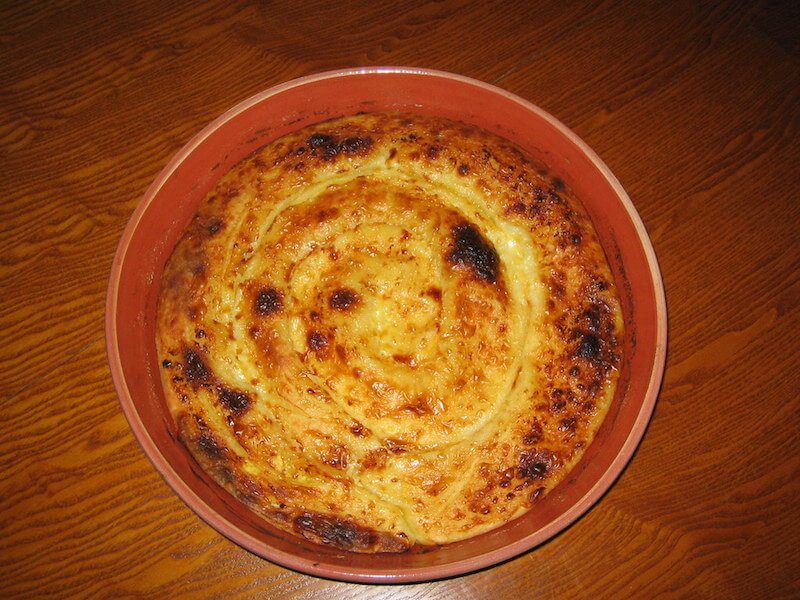 This dish is named by the region it originates from – Zagorje. It is very popular in the north of the country, and definitely something you should ever try if you’re in Zagreb or one of the nearby towns.

Zagorski štrukli is a savory pastry dish. The dough is rolled very thin (to cover an entire table), and then a mixture of eggs, sour cream, cottage cheese, and salt is spread along the edges of the dough. Both sides of the dough are then rolled lengthwise until they meet in the middle.

The two rolls are then arranged in a pan, covered with clotted cream, and baked for about 45 minutes until they are golden brown at the top. Štrukli can also be cooked in boiling water, but the baked ones definitely taste better.

Mlinci are a very tasty side dish perfect for lovers of pasta and pastries. They are made from thick dough (mlinci), and they are very easy to prepare.

You can actually buy the specific pasta for Mlinci anywhere in Croatia, but the dish tastes best when it is made from scratch. First, the basic dough is made, and then it is rolled out to be about a centimeter thick. The dough is then baked in the oven and broken into 5cm squares.

After they are broken up into smaller pieces, they are usually covered with or submerged into chicken broth or salty water, so that they can soak up the flavors. And since they absorb liquids really fast, they need to be wrought out, so that they don’t become too soft. Mlinci are traditionally served as a side dish with roasted chicken, turkey or duck. 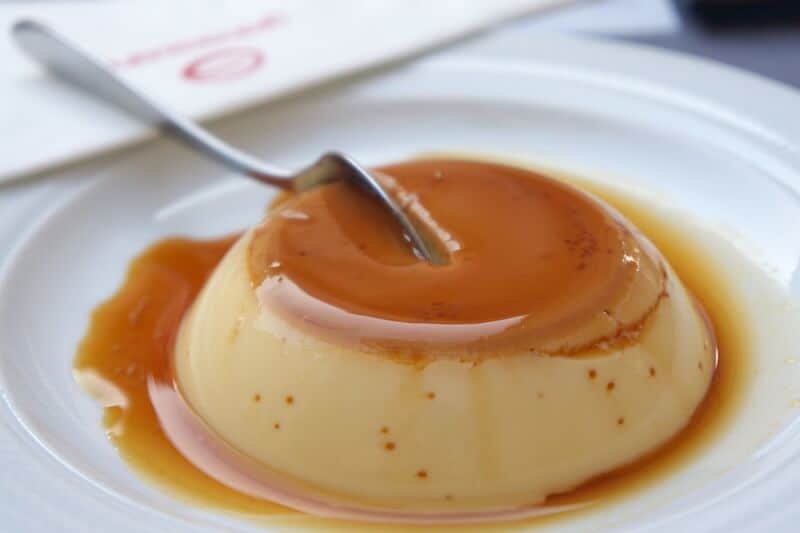 Rožata is a type of custard pudding that’s very similar to flan and creme brulee. It’s a dessert dish that originates from Dubrovnik, and you don’t want to miss out on it if you’re ever in the town. It actually has quite a few names – in Dubrovnik it is best known as rozata, but in other parts of Croatia it’s also called rozada or rožada.

The name of the dish comes from rose liquor (liquor rozalin) which gives the dish its specific aroma. At least, that’s what the traditional recipe calls for. Nowadays, you can find rožate with vanilla or even rum, but they are definitely not worthy of the name.

The easiest way to describe a traditional rožata is a pudding covered with liquid caramel. The pudding is rather basic, as it is made from eggs, milk, and sugar. But the liquor and the caramel add a whole new dimension to the dish and just enhance its flavor greatly. If you have a sweet tooth, this is one dish you must try when you’re in Croatia. 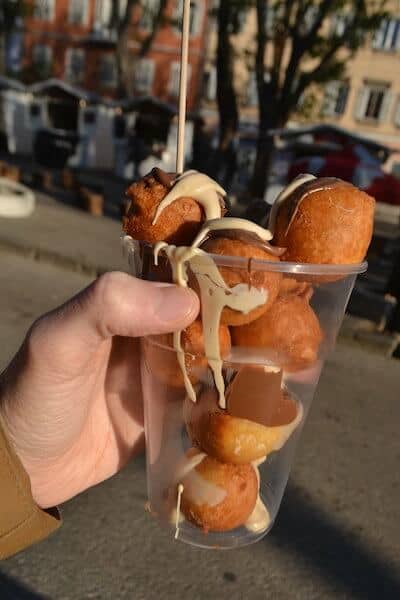 Fritule is a pastry dish popular in Dalmatia, Istria, and Kvarner. It is a dessert dish and is very similar to doughnuts.

This Croatian food is traditionally most popular during the Christmas holidays, but you can easily find it in restaurants and pastry shops any time of the year. Fritule is made by frying small balls of dough, which are traditionally served with powdered sugar.

There are lots of different versions of this Croatian dessert. Sometimes you’ll find fritule stuffed with raisins and other times you will get them covered with chocolate and vanilla, like in the photo.

Regardless of how exactly it is served, it will taste great. If you usually like pastries, you’ll love this dish. But maybe avoid it if you’re on a diet, as fritule is very high in fat.

Brudet is a dish very popular in Dalmatia and Istria. It’s a fish stew and it’s very simple to prepare because with this style of Croatian cooking, everything is prepared in one large pot.

A proper brudet includes several types of fish, and at least one type of crab, frequently langoustine or lobster. The fish is first cleaned and then put in a large pot to cook for several hours, along with tomato paste, white wine, vinegar, and olive oil.

This is a must-try if you love seafood and Mediterranean cuisine in general. Brudet is a dish full of different flavors, and it tastes amazing when prepared properly. It is usually served with cooked or baked polenta, and with lots of sauce.

Imotski rafioli is a traditional Croatian cake that originates from the town of Imotski, hence the name. This traditional Croatian food is served at important holidays and weddings. In fact, the recipe is 150 years old! And it is made from ingredients that are always available in the Imotski area.

One cool thing about this dessert is that once made, it can sit around for days at a time, and it will still taste good. Actually, imotski rafioli tastes the best after a day or two, and not fresh out of the oven.

The pastries are made from sweet pasta dough (pasta dough with vanilla sugar) and they are shaped just like larger ravioli. The filling is made from sugar, egg whites, ground almonds, lemon zest, nutmeg, vanilla, and rum.

You can find this dish in restaurants and shops all over the country, but for the true recipe, you will have to go to Imotski. 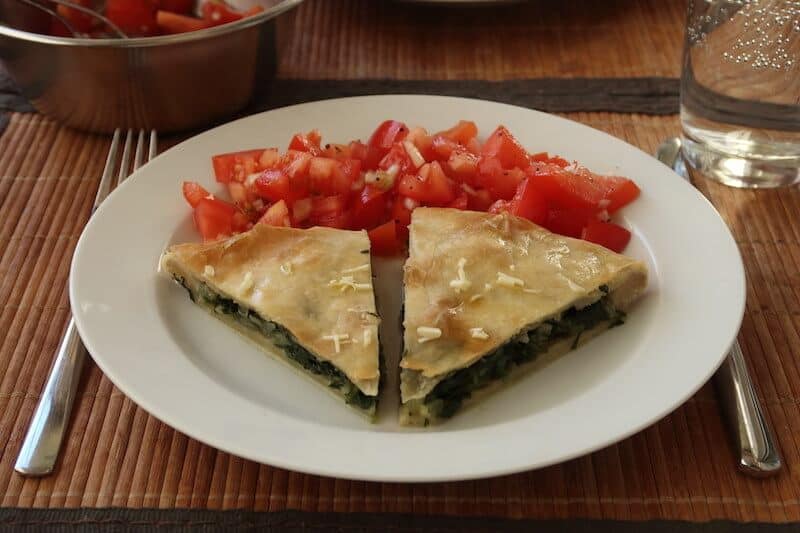 Soparnik is a type of pie, traditionally filled with Swiss chard. It is kind of similar to Bosnian zeljanica, but the overall preparation of the dish differs a lot.

The traditional soparnik is actually rather simple to prepare. The top and bottom layers are thin dough, which becomes very crispy when baked in the oven. The middle layer is filled with Swiss chard, onions, and parsley.

This is baked in the oven until the top layer is golden brown, and it doesn’t hurt if it gets burnt a little. Soparnik is cut into triangles pizza-style, and it’s often served with a side salad or some sour cream.

That’s the traditional soparnik. Nowadays you can find versions of this Croatian cuisine that include sweet filling (caramel or dried fruits), and even some that are filled with nuts. But those do not represent the cultural heritage of this dish properly. 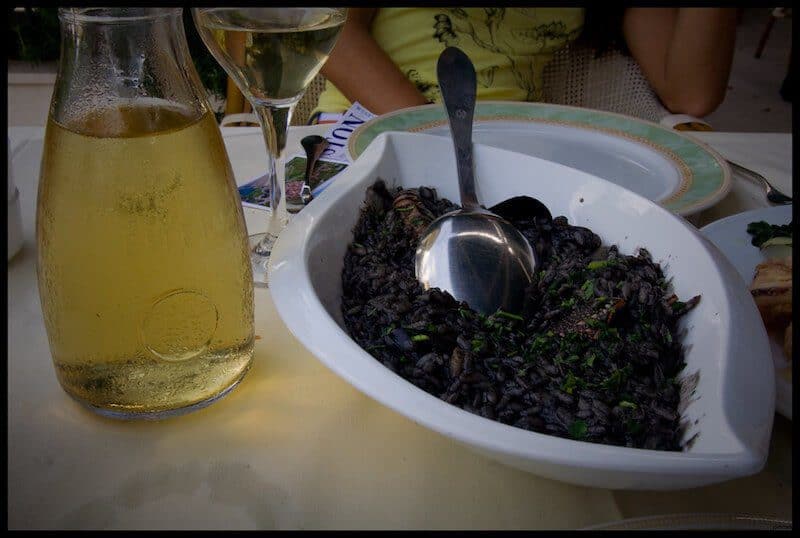 The black risotto is kind of a hit or miss dish. It mostly depends on how you feel about cuttlefish, as that is one of the main ingredients in the dish.

The risotto itself is very basic in preparation. It includes rice, parmesan, olive oil and lots of spices. Usually, it is also served with cuttlefish, oysters or crab. But the most interesting thing about the dish is its color.

Which of these traditional Croatian dishes do you most want to try? Let me know in the comments section below

If you enjoyed this post please pin it using the image found below! 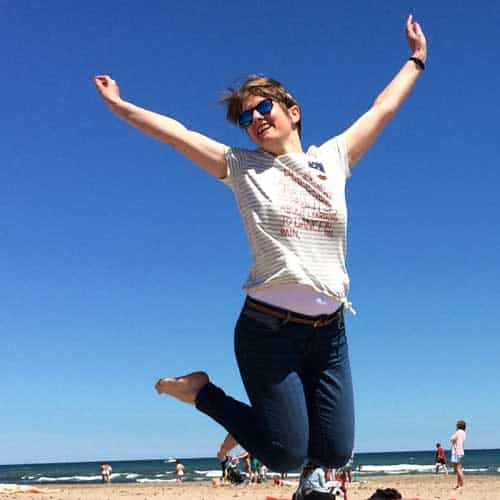 Anna was born to travel the world having studied languages all her life. Although she has traveled the world, she now calls Switzerland home and spends her time writing about her experiences on her travel blog with her husband. 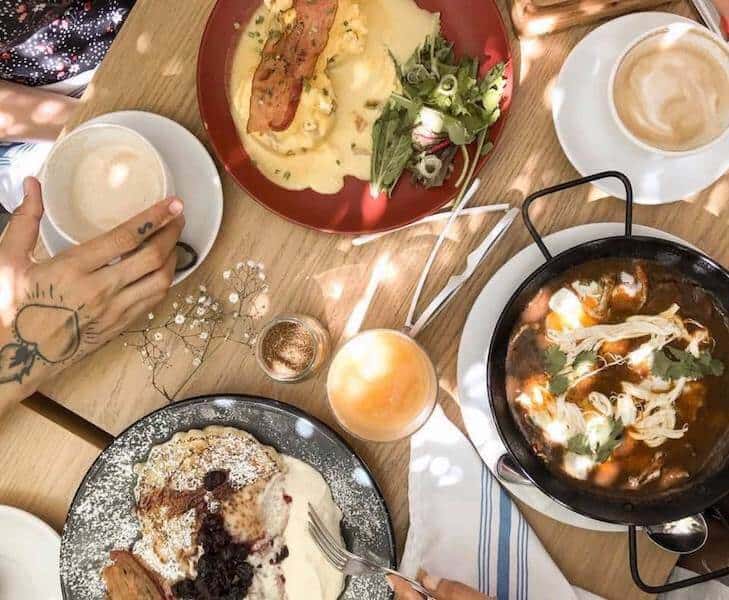 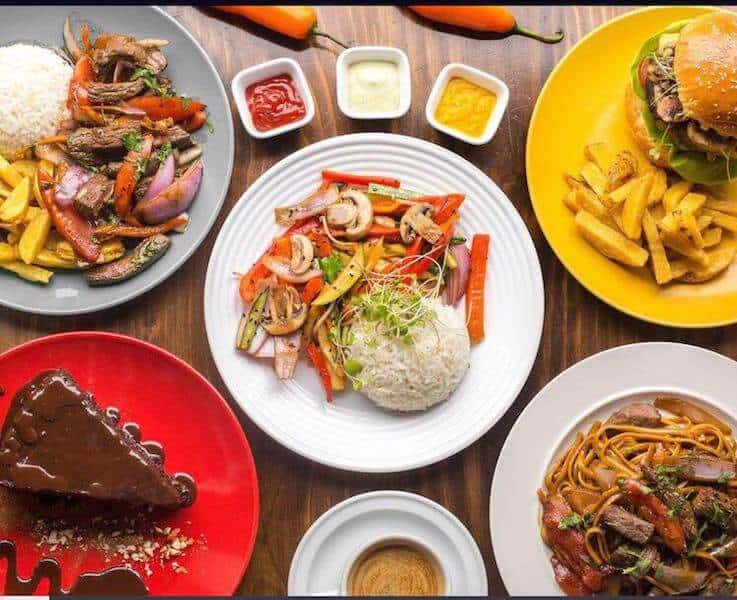 17 Must Try Lima Restaurants | Where to Eat in Lima, Peru
Read Next Post →
Click here to cancel reply.

Imotski Rafioli is the all-rounder according to me.

One cool thing about this dessert is that once made, it can sit around for days at a time,

The traditional soparnik is actually rather simple to prepare

The black risotto is kind of a hit or miss dish