Of all the things I did in Prague, one of the most unique and interesting was spending half a day truffle hunting with Prague Truffle.

Prague Truffle was founded by a group of biologists. So, when they began developing the idea for the company (which, like all truly great ideas, they did over beers in a pub), they took a scientific approach. What else would you expect from a group of scientists?

Their goal was to introduce the art of truffle hunting to the public in a way that was both informative and fun. I was curious to learn more about truffles, even though I wasn’t the biggest fan of them. Most of my experience with the taste came in truffle oil or butter, which I typically find too strong.

I met my guide Marketa and our truffle hunting dog Nela in a centrally located park on a bright, sunny morning. After quick introductions, we jumped in with some interesting facts about not only truffles but the art of using dogs to hunt them down.

Truffles, which I learned are a form of mushroom, are one of the most expensive food items in the world. They sell for about 100 USD an ounce. One truffle once fetched an estimated ONE MILLION DOLLARS at auction.

Why are truffles so expensive? Because they grow underground and require specially trained animals to find. What’s more, it can take 40 years to grow a white truffle.

Whereas we typically think of truffles as only being found in Europe, I learned they are found everywhere but the tropics and arctic areas, where the temperatures are too extreme. You can even find truffles growing in my home country of the United States. There are 6 different varieties of truffles.

I also thought only pigs are used to hunt truffles, but Marketa taught us why dogs are actually better and pigs are now mostly used for the benefit of tourists. In Italy, it’s actually now illegal to use pigs for truffle hunting, as they destroy the environment and truffles are highly sensitive to environmental changes.

A dog’s sense of smell is 10x better than ours, and truffle hunters prefer female dogs because male dogs get too distracted “hunting” for female dogs.

One of the main reason pigs are no longer used is because they begin eating the truffle as soon as they find it, so handlers have to fight to remove it from their mouths. Many truffle hunters of old lost fingers trying to retrieve the valuable truffles from their pigs’ mouths! 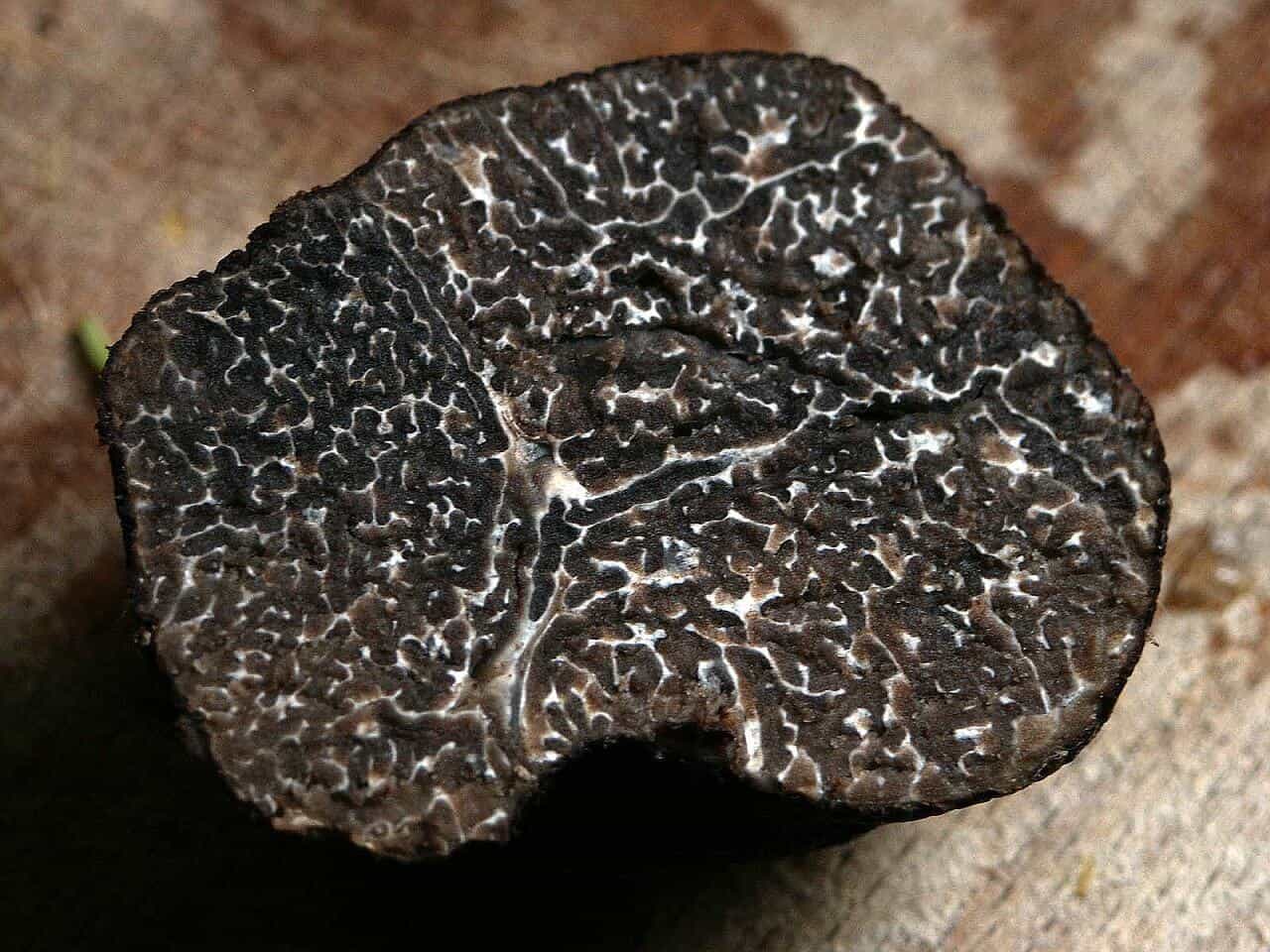 Dogs are also easier to train than pigs. Training begins when they’re puppies and can cost as much as 10,000 euros. This is another reason why truffles are so expensive.

Historically, up to 50 kg of truffles were sold in old Prague markets every week in high season. But now truffles are protected by law to prevent harm the natural truffle supply. So, our guide demonstrated Nela’s hunting abilities with truffles that had been pre-hidden in the park.

Even though we made the challenges increasingly more difficult, Nela easily found the truffles we hid for her. 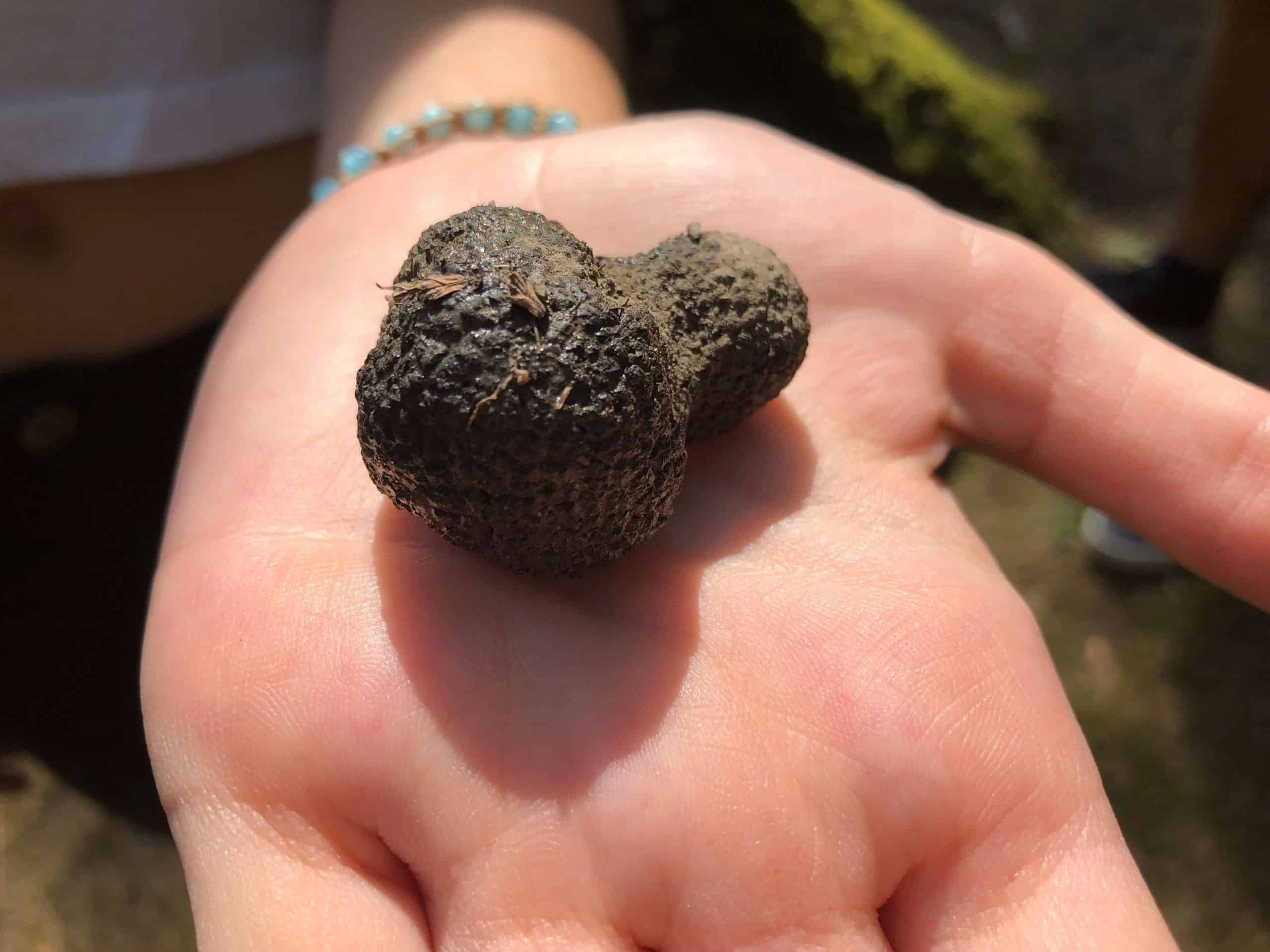 We hunted truffles during the day but learned that most truffle hunting is done at night, because that’s when the dogs are less distracted. Dogs truffle hunt better when they’re hungry, as they’re trained that truffles are food. Like pigs, dogs will try to eat the truffles they find.

After watching Nela successfully find every truffle we hid, we made our way to a nearby restaurant for the highlight of the day—tasting the truffles!

We were served a creamy chicken pasta and each encouraged shave as much truffle onto the pasta as we liked. As I mentioned above, I didn’t think I was a fan of truffles, so I took just enough to be polite. 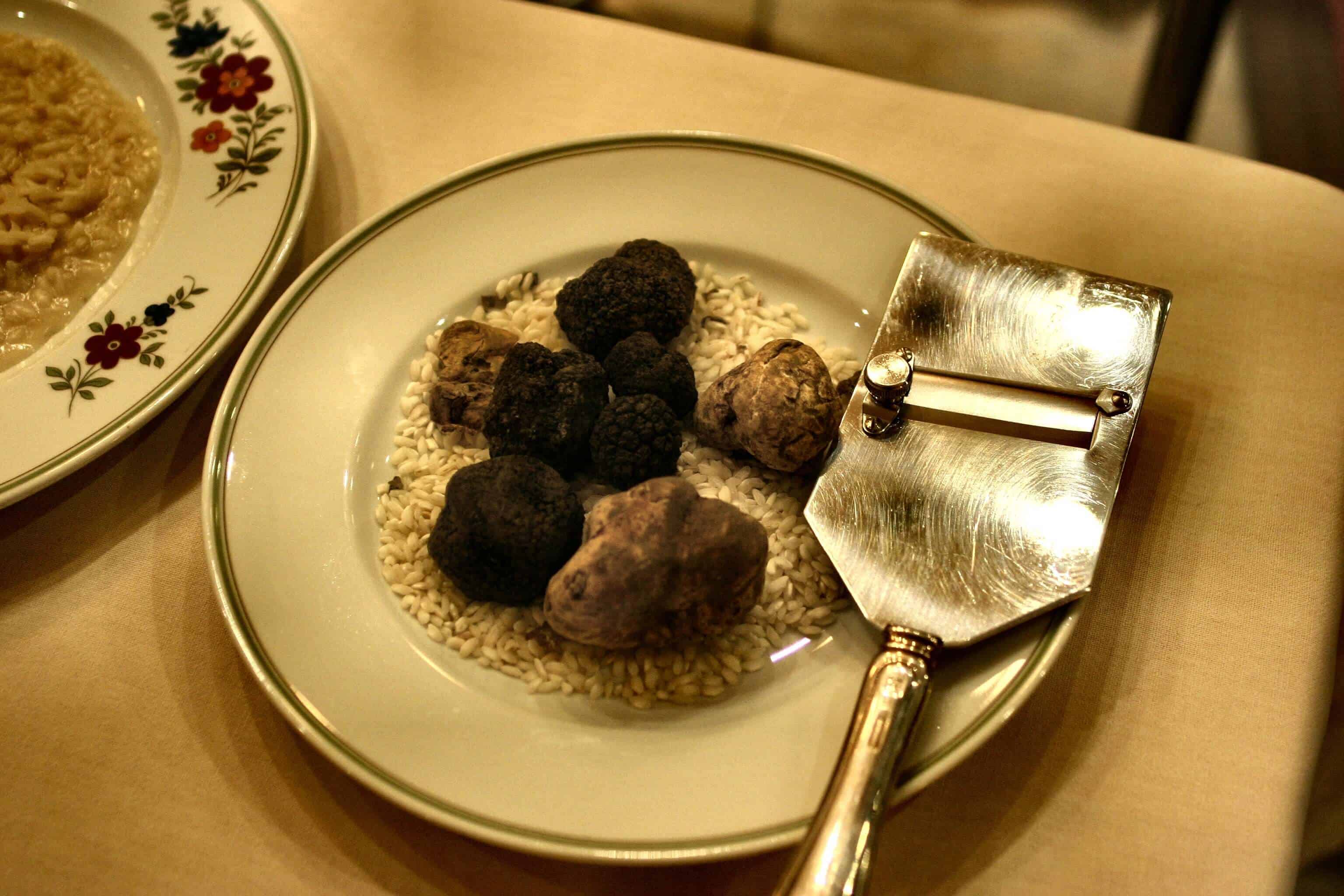 I was wrong. So wrong.

Fresh truffles are delicious. They are nothing like the truffle oil I’m used to, which I learned is probably fake anyway.

Fresh truffles are earthy and have a strong but not overpowering flavor. When you shave fresh truffles onto a hot dish, they heat slightly, releasing their aroma and flavor in the dish.

Excited by the discovery, I grabbed the truffle and shaver and literally showered my pasta with shaved black truffle. I couldn’t believe how much I liked something I initially thought I wouldn’t care for at all. 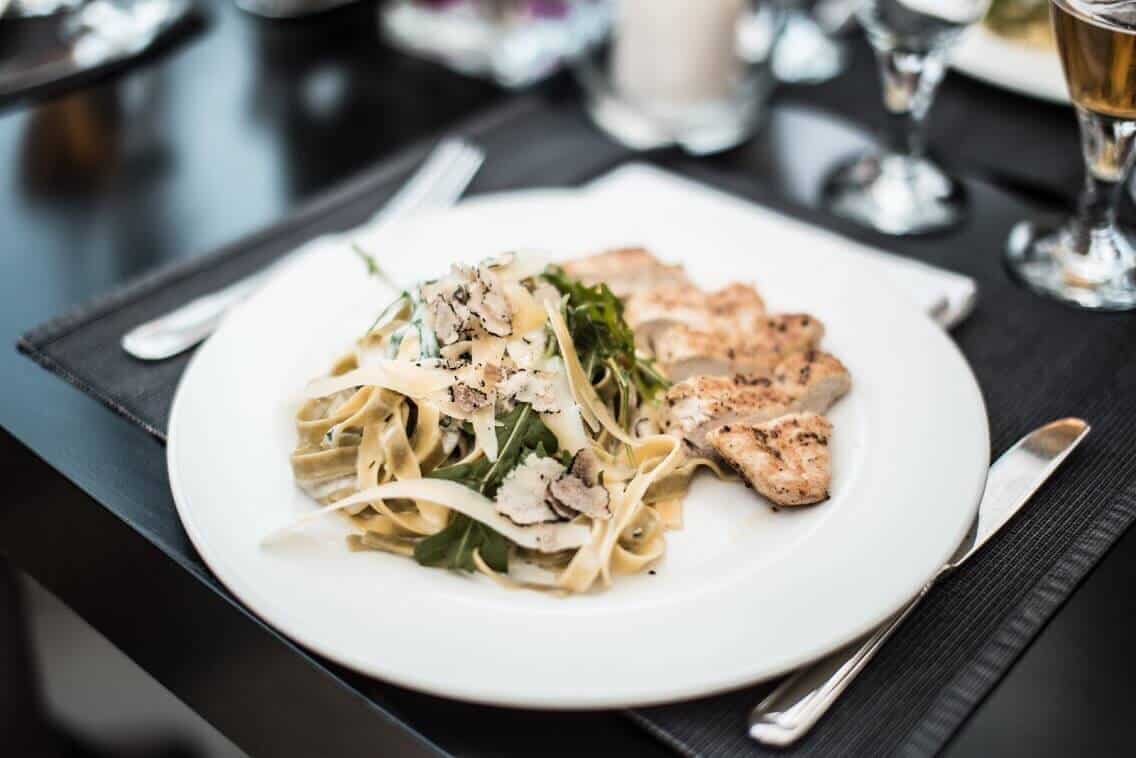 Lunch finished and my newly found love of truffles realized, we began to say our goodbyes. Before we left, we were each given a parting gift: our very own whole truffle!

I didn’t know what to do with mine, but Marketa was kind enough to give suggestions. Apparently, one of the best and easiest ways to eat truffle is to shave them over scrambled eggs. What a decadent start to the day!

Would you like to go Truffle Hunting in Prague? Let me know in the comments section below!

If you enjoyed this post please pin it using the image found below! 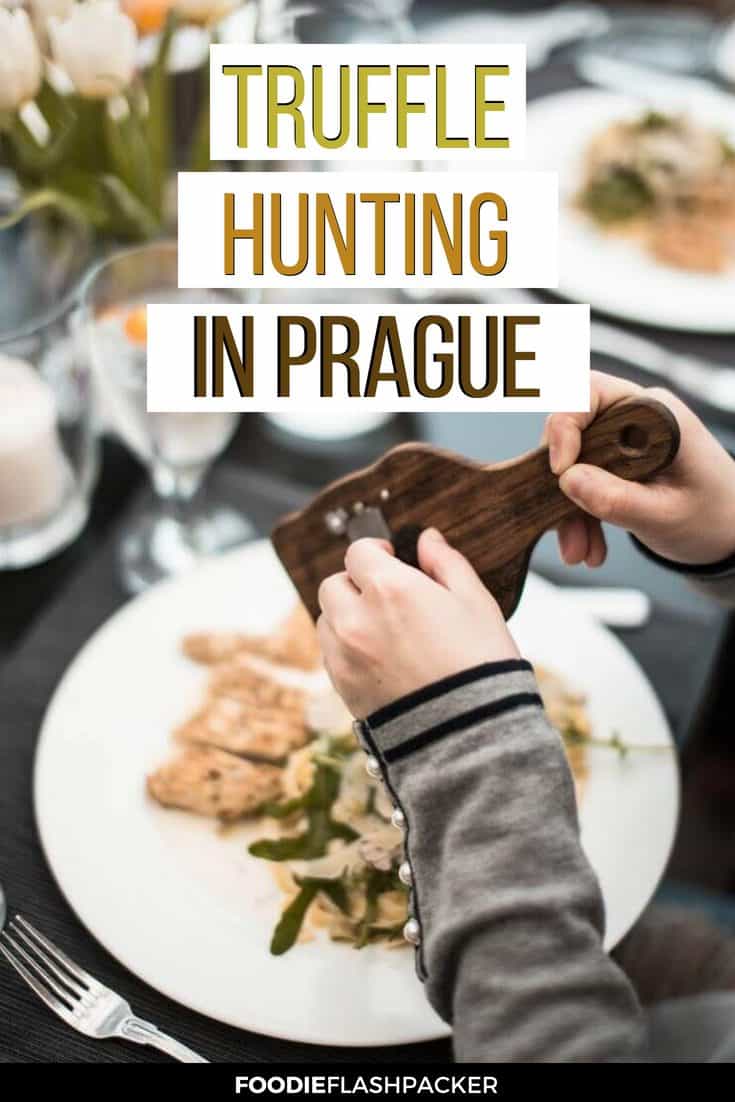 Practical Information: To book this tour for yourself, visit Prague Truffle.

I would like to thank Prague Truffle for inviting me to attend this tour as their guest. All opinions remain my own, as usual.

Can any one here confirm me if treasure hunting is legal in Czech Republic or not ? I will have to stay in Czech for over a year and I am worrying about my hobby of treasure hunt.

Well said Nathan. Your article is really helpful for me. I am really so passionate to Truffle hunting. Thanks for sharing such an important post.

Nice article! I didn't realize there was Truffle hunting in Prague but it makes sense after reading this.

Thank you! I didn't know you could do this in Prague either but I was so excited when I found out. It was something totally new for me!