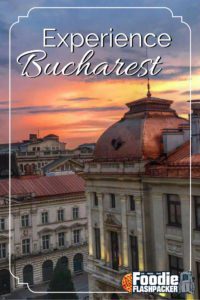 When I saw that applications for a press trip to Romania called Experience Bucharest had opened up, I jumped on the opportunity and applied immediately.

I had visited Romania before I began blogging. I knew I loved the country, and I especially knew I wanted to see more of Bucharest.

During my previous visit, I had hung out with a local friend, and he told me “now Bucharest is right on the verge. Anything can happen. If you have an idea and are willing to work hard, you can make anything you want happen.”

I was eager to return to see if this was true. Turns out, as demonstrated to me by the organizers of this event, he was correct.

One  thing that interested me most about this event is that it wasn’t a government sponsored initiative.

This event took place because one local couple love their city so much they want to see it better promoted as a tourism destination. 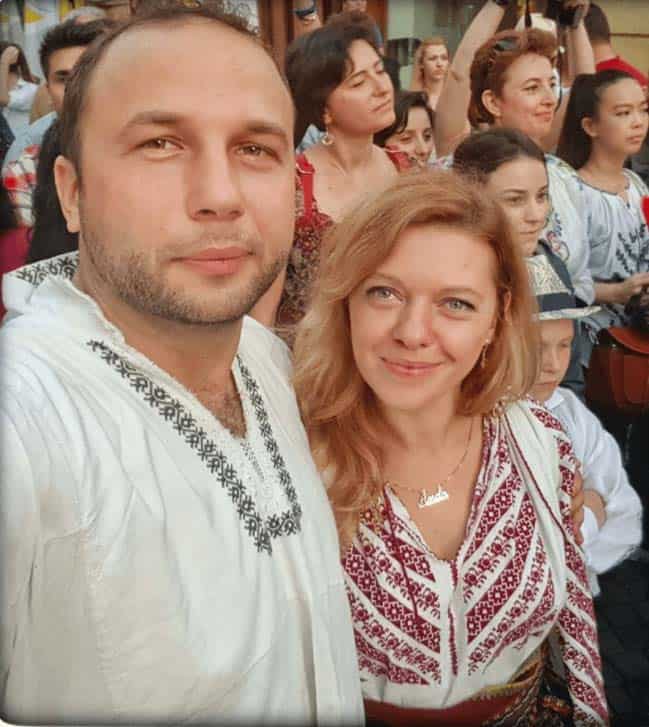 Our hosts, the event organizers, Tudor and Anda. Check out their blog Always Summer.

The event was self financed, and the hard working team of volunteers worked literally around the clock to put this event together and ensure it was a success. I had emails and messages regarding the event returned to me at 3:30 in the morning. We joked that the team didn’t sleep and was instead fueled only with coffee and wine.

I was the first to arrive and spent days with the team working on my projects while they finalized details. Their hard work and passion was contagious.

And,  because I was the first to arrive, the team was nice enough to take me out for a small welcome event on the day of my arrival.

Please don’t let this caption fool you: there was more than one bottle had that night.

Special thanks to The Pullman Hotel for hosting me during my time in Bucharest. The hotel is located in the city’s commercial district rather than old town, but because taxis and Uber are both affordable and readily available, it’s quick and easy to make your way to the more touristic area. 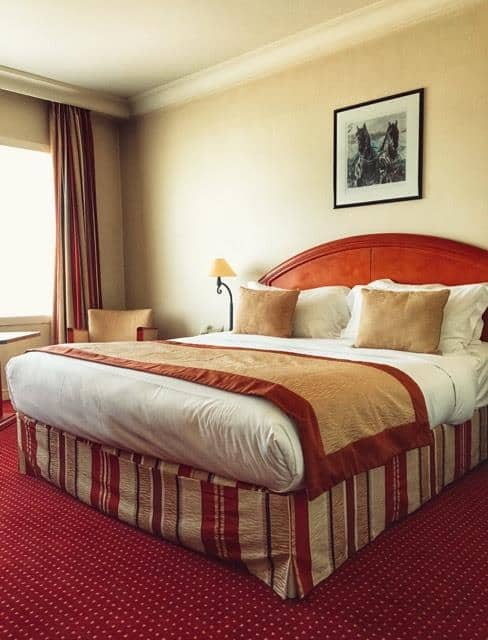 The conference itself followed a panel style with time allotted for a Q&A session at the end.

I appreciated the mix of panelists- each were an expert in their field, and sessions often ran over as they happily stayed on to answer everyone’s questions.

Some names were familiar to me, including Dave & Deb from The Planet D and Kate from Adventurous Kate, whose blogs I already follow.

I wasn’t familiar with others, like Kristen and Siya, the team behind Hopscotch the Globe and Alyssa from My Life’s a Movie, but I have since started following, as they’re all doing really great work.

I took a lot away from the panels and hope to start implementing their suggestions into my blog and blogging strategy soon.

The tours were well planned and enjoyable. Instead of everyone being led on the same tour, they opened up more than forty different tours of Bucharest over a two day period, and we were able to choose the four that most interested us.

Of course, I immediately signed up for both the food related tours available.

The first was the Bohemian Tour. I knew it was going to be my type of tour when the first stop, at 11 a.m., was for beer. 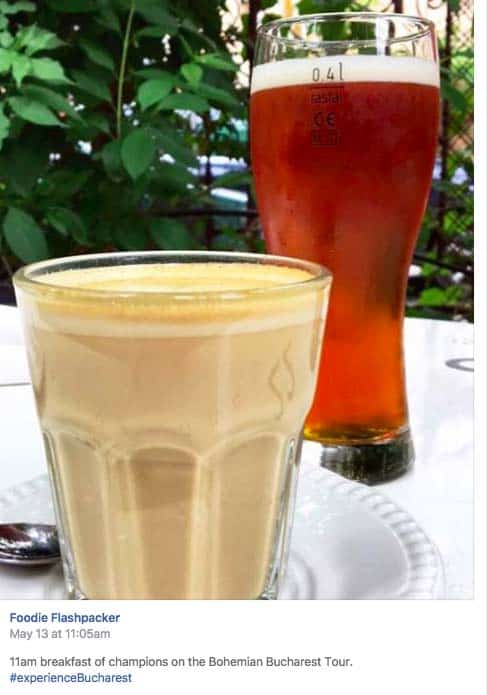 Our next tour stop took us to the central market. I watched with interest as everyone at the busy market sampled, haggled and purchased goods.

The ground level was full of fruits and vegetables, and the top level contained meats, cheeses and wine — my version of heaven. The vendors were nice enough to put together a tray for us to sample with several varieties. As we walked through, other vendors randomly called out to us and offered samples.

If you’re interested in learning a bit of history during a walking food tour, I really enjoyed the context and information this one provided. You can book it yourself by clicking here.

My next tour, although not food related, perhaps affected me the most. It was the Outcast Tour– a tour led by a formerly homeless local man. His life story intrigued me, and he gave us a glimpse into a life many of us would not have otherwise been exposed to. 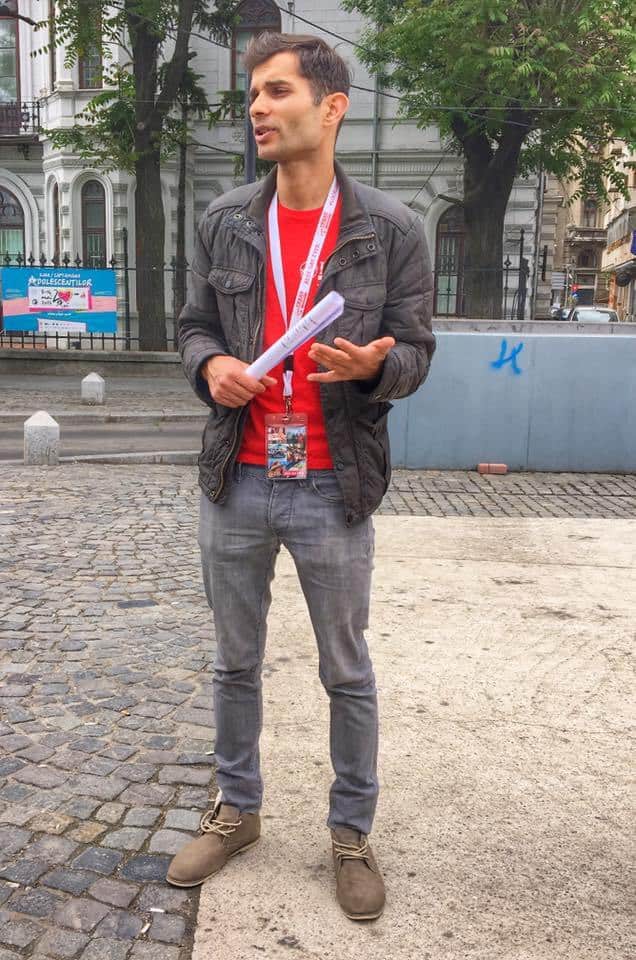 He told us how he ran away from abusive government-run orphanages to instead live in the sewers, which was more preferable.

His story involved drug abuse and addiction, prison stays, overdoses, and how the homeless are seen as almost “invisible people” to society. He was eventually able to overcome all of this and now works two jobs and owns his own apartment. He also helps others in similar situations overcome the same obstacles.

I won’t give away all the details of this tour, because I really encourage you to check it out for yourself by clicking here.

I also was lucky enough to grab the last spot on the Tasting Bucharest tour. This tour featured three stops where we sampled local dishes from a traditional restaurant, high end versions of a favorite local dish from one of the best hotels in town, and finally, enjoyed the best coffee shop in town.

As with the other food related tour, I appreciated this tour’s explanations of the history of the dishes. We learned about seasonal foods and also coffee history during our final stop. If you’re interested in learning about food, history and culture, you can book the tour by clicking here.

When I found out there was a Garlic Culinary tour, I made sure I to join it. We learned all about how Romanians regard(ed) garlic as a magical plant, and how the plant wound it’s way into the legend of Dracula. Spoiler alert: it’s all fantasy.

Still, we did learn some interesting things about garlic and its importance in Romanian history. Romanians have used it to prevent and treat sickness, and the plant was once valued so much that 7kg of garlic could be used to buy a slave. 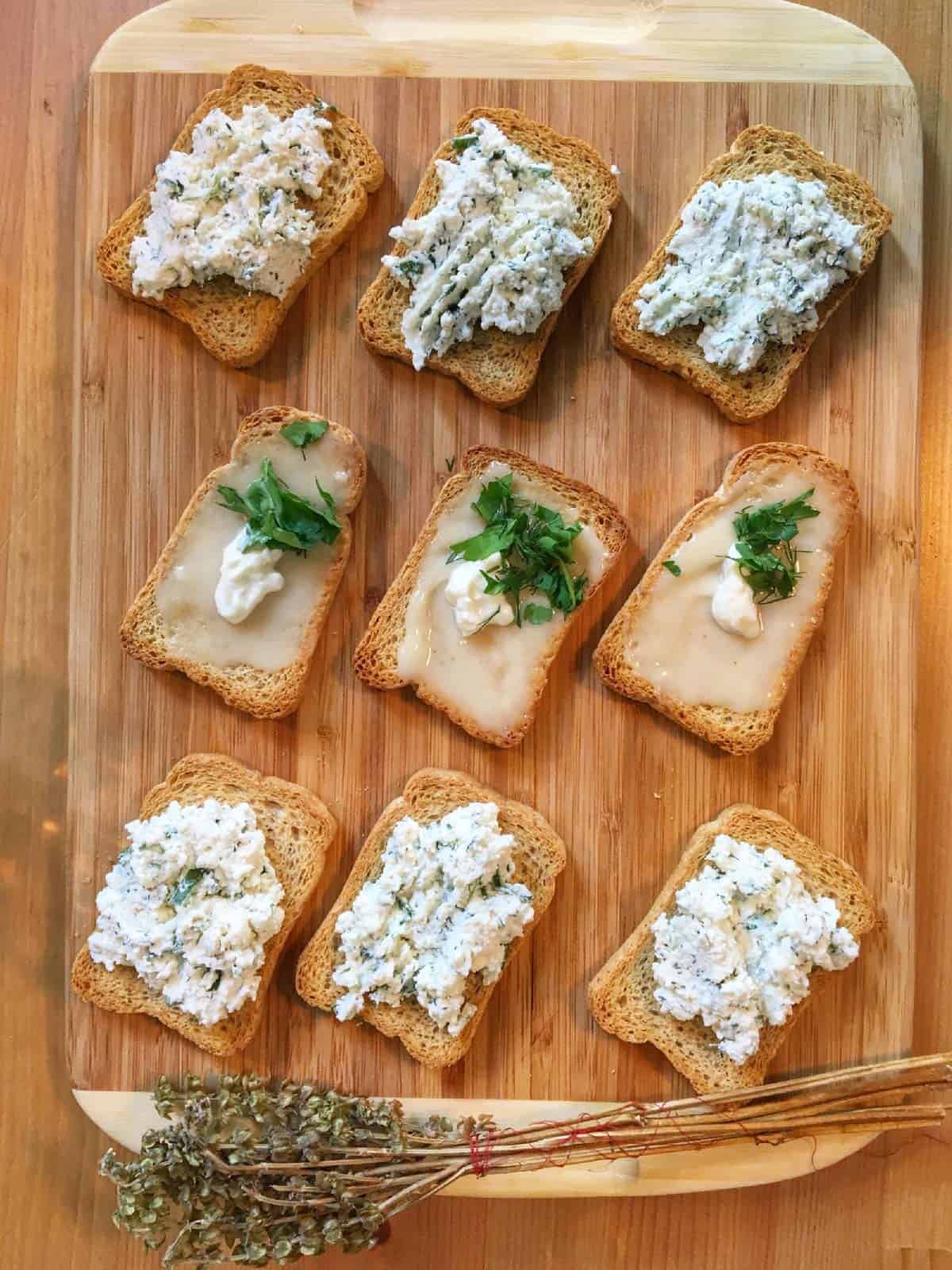 The meal was delicious and made even more so because of the history behind the dishes. You can book this tour here if you’re interested in great meal with a lot of cultural history behind it.

The Rroma Heritage Tour was so popular that it immediately sold out, prompting the organizers to arrange additional times. Rroma is the term now used to refer to those groups who used to be called gypsies.

Being in Romania, many of us wanted to learn more about the history of these people. Our guide started by explaining the history of where the Rroma came from, how they came to Romania, and the persecution and prejudice they still struggle to overcome.

The tour started in a handicraft store, where we learned about the artisanal goods the Rroma produce. The goods were fascinating and high quality, and several people bought items to take home.

Next we visited a local neighborhood, and it was sad to see the state of the place. While initiatives are being introduced, the neighborhood is in a bad state. Check out, for example, this children’s playground: 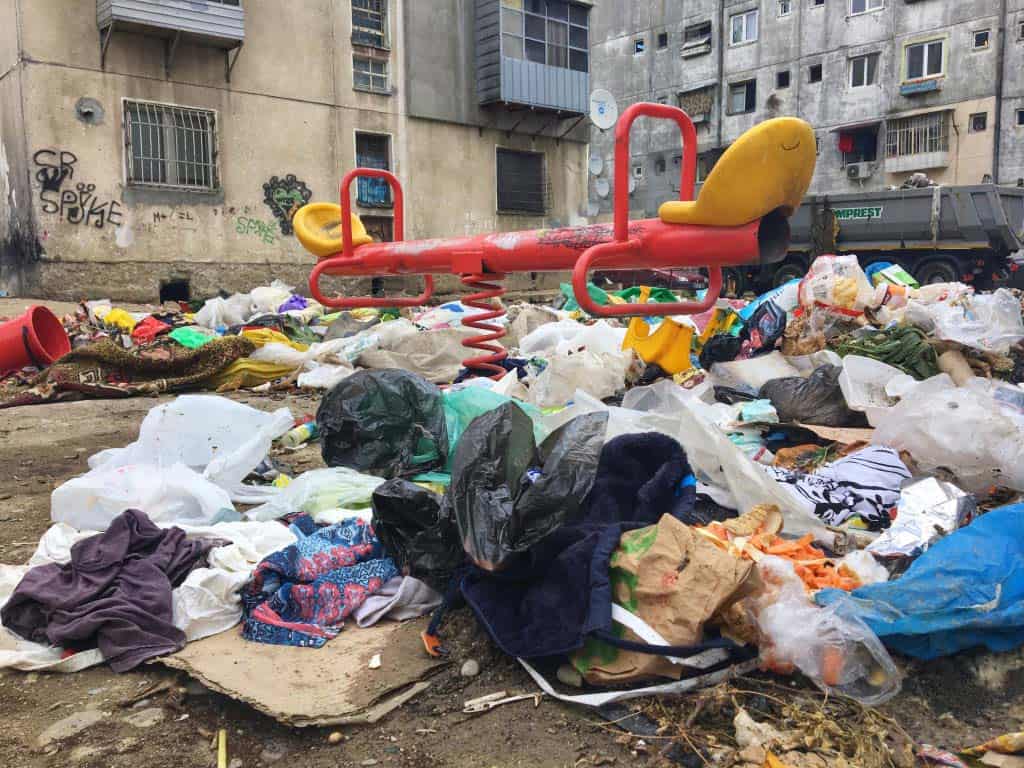 I was impressed that the team at Experience Bucharest didn’t attempt to only show us the best of the city, but also the real parts, as gritty as they can be.

The tour ended on higher note when we visited a local Rroma flower market. The vendors were all so friendly, passing out free flowers to all the ladies in our group. 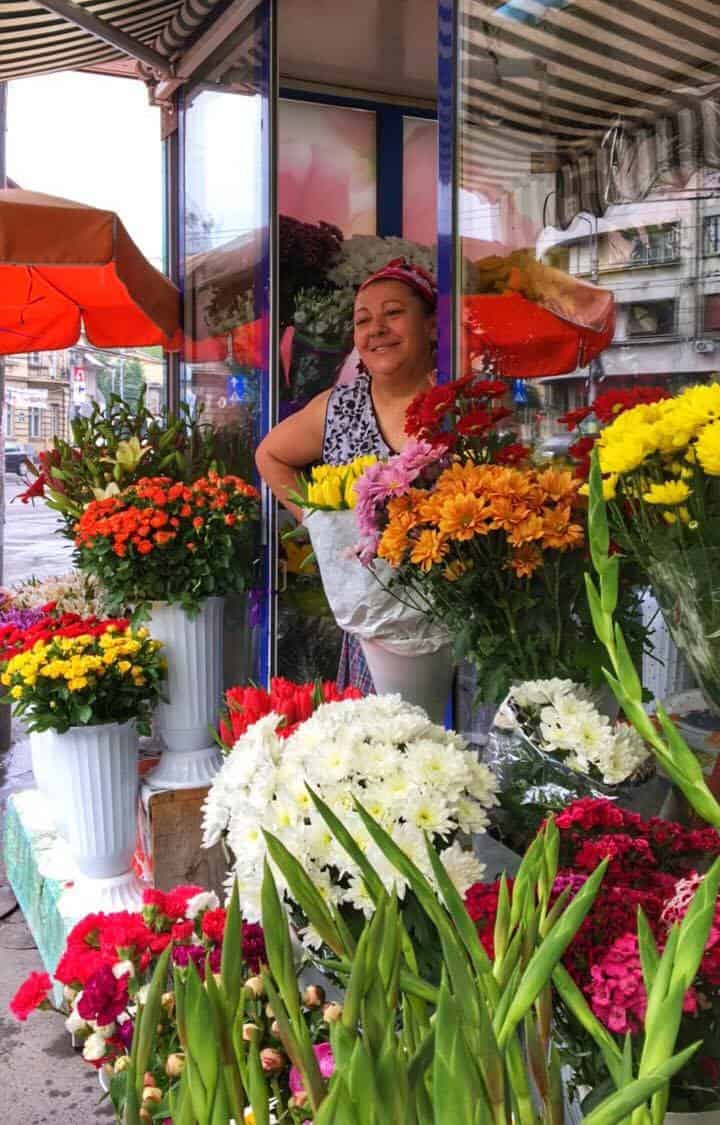 If you’d like to learn more about the complicated history of an interesting group of people and actually visit where they live, you can book a tour here.

And finally– a bonus tour. Enough of us food bloggers had expressed interest in a Wine Tour that the team at Authentic Romania arranged one for us.

The tour began at a wine museum and then moved on to two different vineyards for lessons on wine making and the history of the region’s wine production. The second vineyard also provided us an authentic local lunch.

And of course, tastings. Lots of tastings! We tried almost countless varieties of excellent wines. 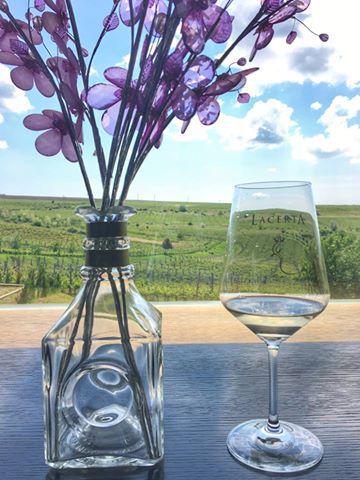 I was also impressed by this tour because it took place outside of the city, in smaller villages. We were able to see how locals live outside the country’s capital. 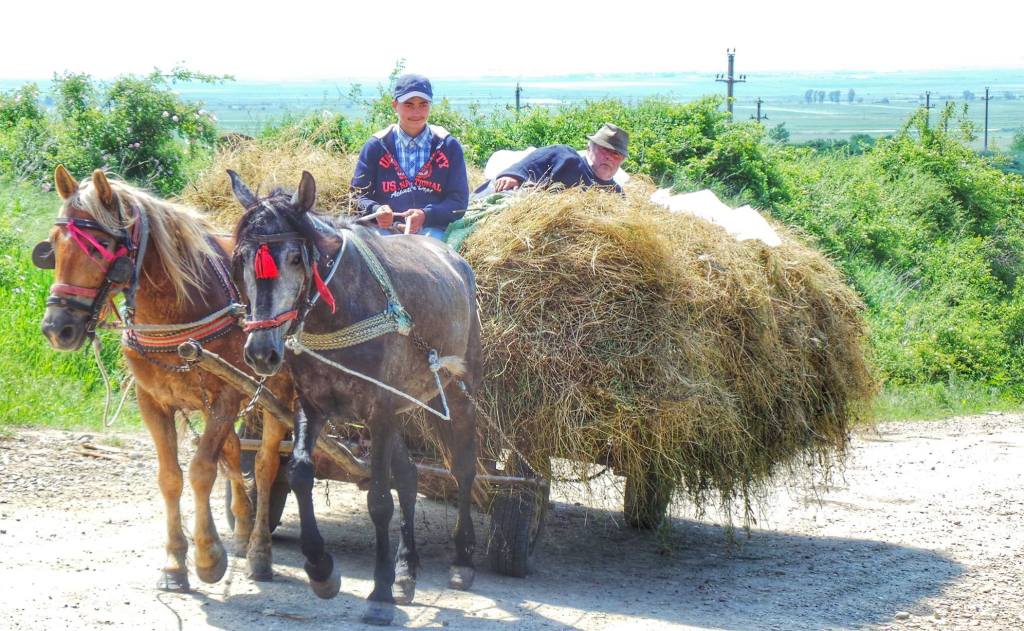 Romania is already ranked the fifth booziest country in the world, but I guarantee that during the event we slid the country up a couple of spaces.

Experience Bucharest featured a party every night, and some nights there were after parties.

We partied on rooftops of private museums not yet open to the public. 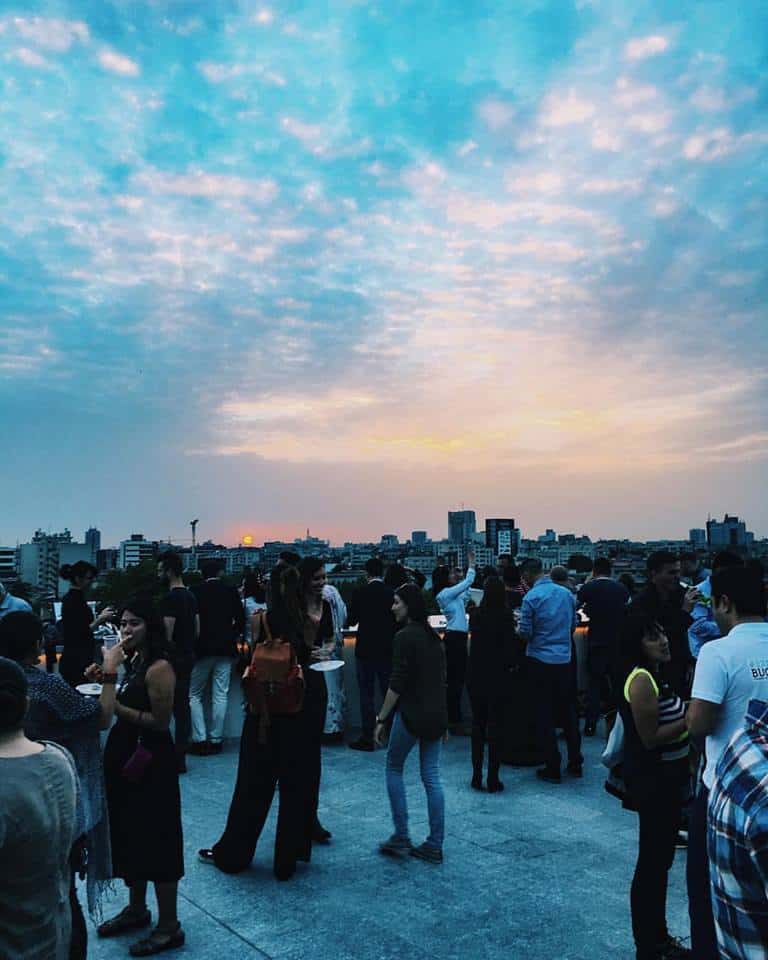 We enjoyed VIP access that included bottles of champagne and vodka at every table at Player Club, the best nightclub in Bucharest.

We drank on rooftops of hostels located in the center of old town, drinking local wine and watching sunsets like this: 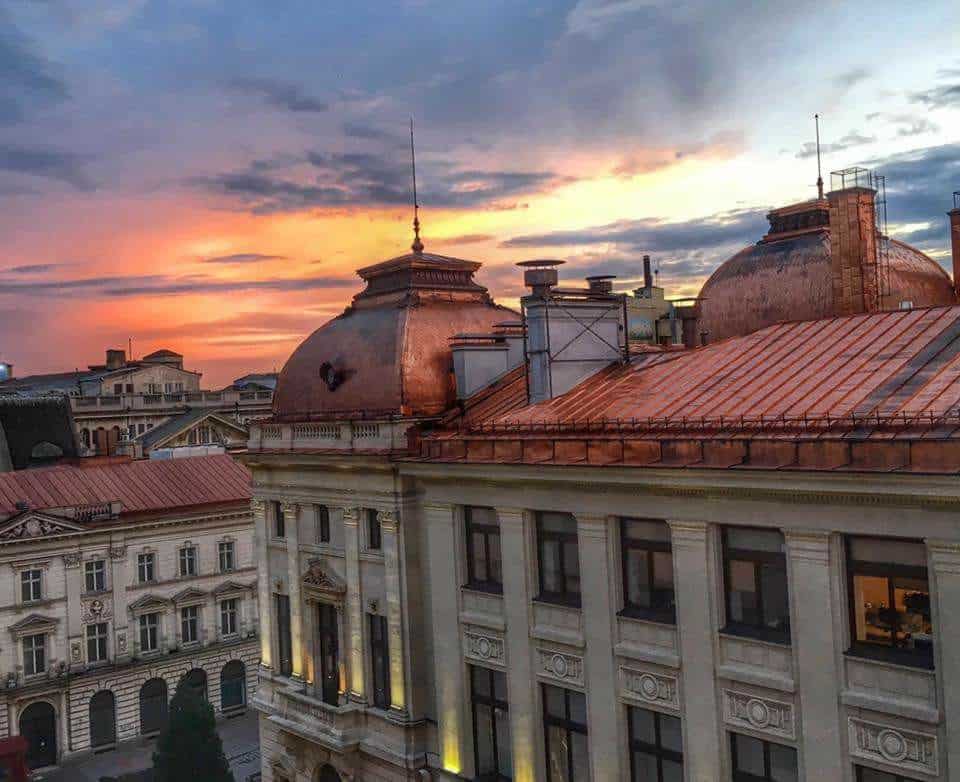 We even literally danced on the streets in old town during a huge organized dance party.

Our final party was held at the garden of Podstel. While a more relaxed, subdued evening, it was a great way to end the event, say goodbye to new friends, and exchange contact information.

As always, these events provide amazing networking opportunities. It was nice to catch up with friends from past events and finally meet in person with people I had only previously known online.

I made some great new friends that I’m already planning to catch up with again soon, and I also made some contacts for collaborations and possible business opportunities.

But mostly, surrounding myself with a bunch of other people who are all doing the same thing is motivating. It’s also great that everyone at the table understands that not one bite of food can be taken until all dishes have been photographed from multiple angles.

Would I go back? During the final night’s party, we were being interviewed for a documentary being filmed about the Experience Bucharest project. I was asked “What would you think about a project called Experience Romania?” “How do I sign up?” I replied without even needing to think about my answer first. 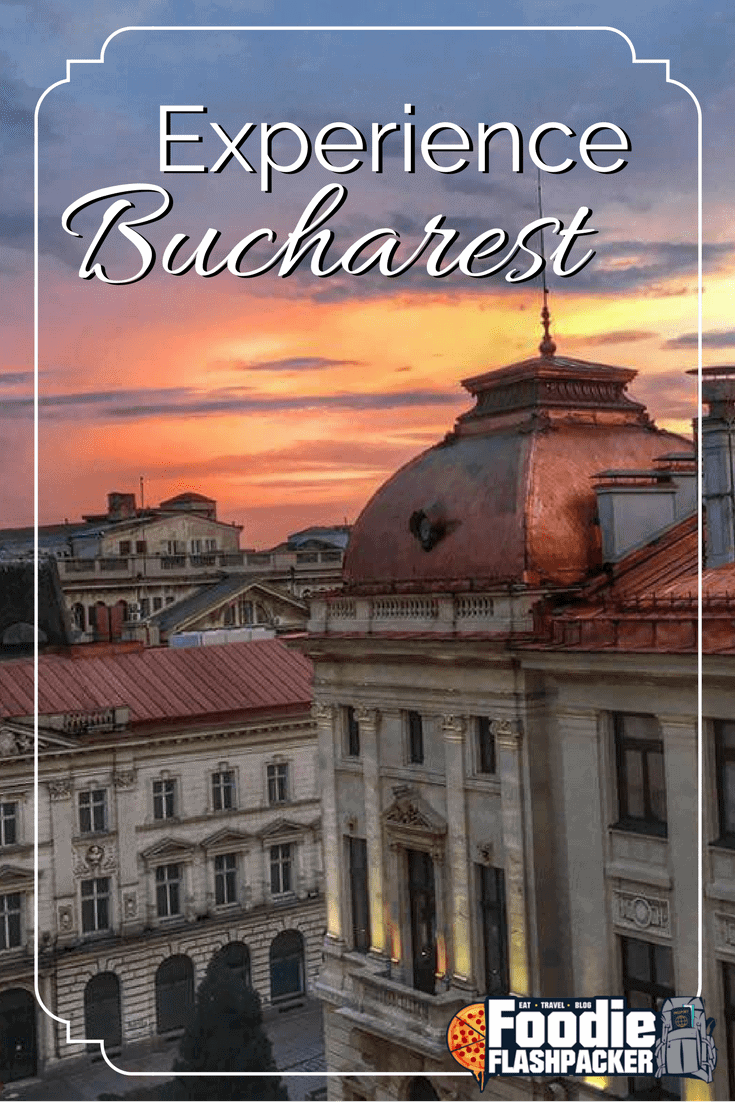 What about you– what part of Experience Bucharest looked the best? Would you consider Romania as a tourist destination? Let me know in the comments section below. 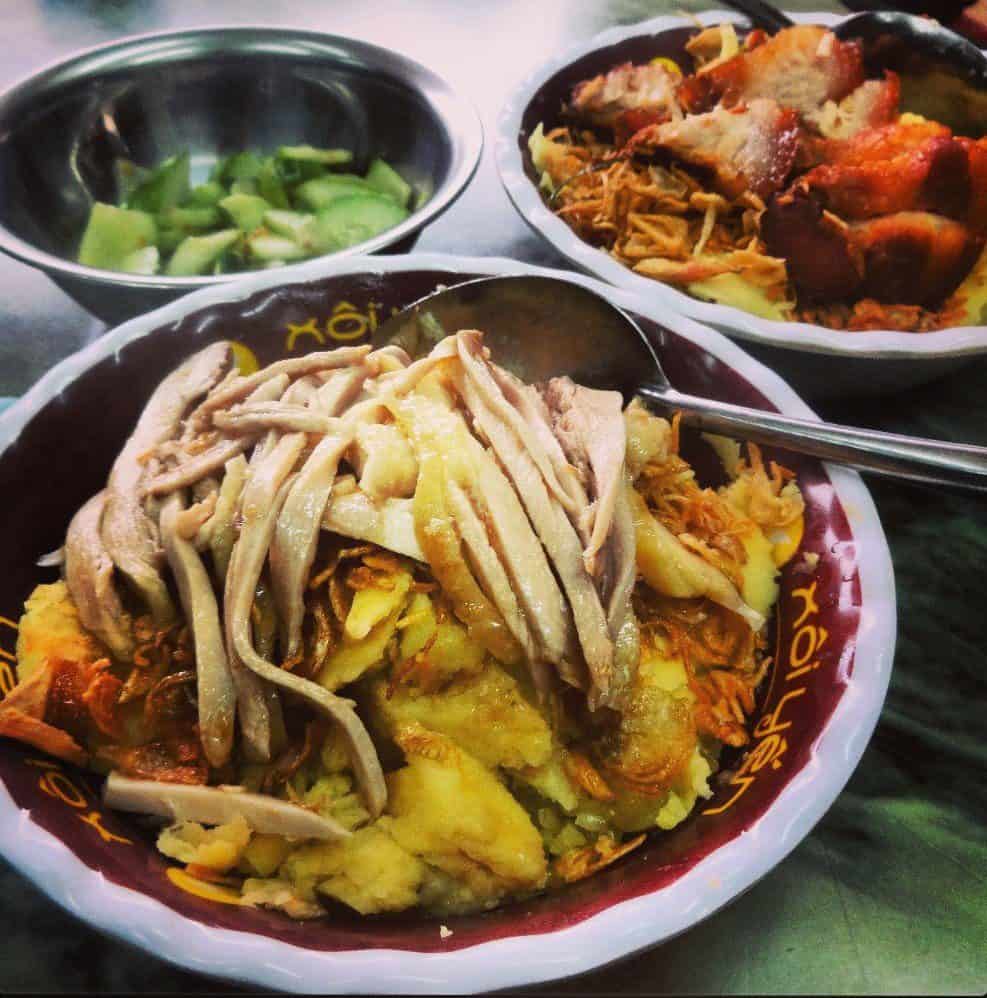 9 Must Eats in Hanoi, Vietnam | The Best of Vietnamese Food
← Read Last Post

[…] it, we didn’t get the opportunity to go. If you would like to learn more about it, check out Nathan’s review on the Foodie […]

I would love to get to Bucharest. That has been long on my bucket list. Now I know where to start with exploring it.

I love Bucharest! I hope you go soon. It's a great city and an even better country.

Wow, 40 tours to choose! What a great event, I was in Bucharest last summer and I agree with you it is a fantastic city. Plus meeting other bloggers is always inspiring, motivating and fun. I could not help laughing when I read that nobody could eat a bite until everything was photographed from multiple angles, lol