9 Must Eats in Hanoi, Vietnam | The Best of Vietnamese Food

This week, I’m taking some time off to participate in the Himalayan Travel Mart Nepal Conference. Look for lots of great content about that soon.

In my absence, I’ve asked my friend and fellow foodie Jason, from Edible Adventure Travel, to guest post. He was the first person who came to mind when I thought about who is as passionate about both food and travel as I am.

Check out his top picks for must try dishes from Hanoi, Vietnam. Vietnamese food also happens to be one of my favorites!

9 Must Eats in Hanoi

Vietnam is a foodie’s paradise. This is the only country I’ve visited where all I wanted to consume was more and more Vietnamese food, and often too much. I just couldn’t stop myself. Not once did I crave other cuisines. I nearly forgot they existed.

Every bit was pure pleasure. It was bliss.

The freshness of the herbs, the variety of condiments, the pungent fragrance of fish sauce, they all worked together in perfect harmony. Vietnamese cuisine is something your taste buds don’t simply forget, but fiercely desire. For food lovers, the first bite will likely ensure your inevitable return, or in any case, get my fix whenever I can. 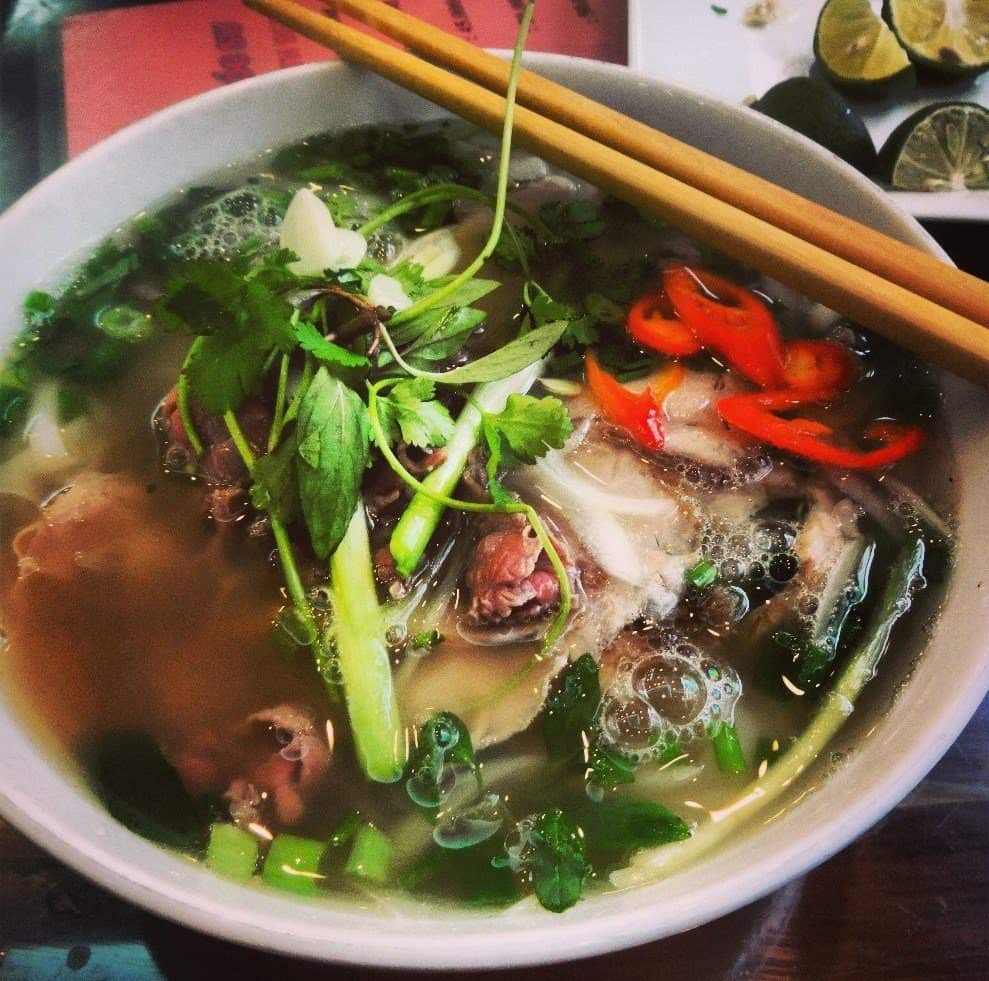 This soup, the country’s national dish and famous worldwide, can be found just about anywhere — from restaurants to the better option — a little street stall with plastic stools to park your rear on. Pulling your knees to your chest as you pluck the Thai basil into the steaming broth and slurp back a warming bowl of heaven while watching the bustle of the street, it’s a quintessential moment for me when I arrive in Vietnam.

A beef broth flavoured with lemongrass, ginger, star anise and cinnamon create an aroma that draws you in. Although they vary from restaurant to stall to city, the accompaniments generally consist of beansprouts, scallions, thinly sliced onion, Thai basil, fresh chilies and lime. Fresh rice noodles fill the bowl, which is topped with shaved beef. A true masterpiece. Also try Pho Ga, the chicken version. 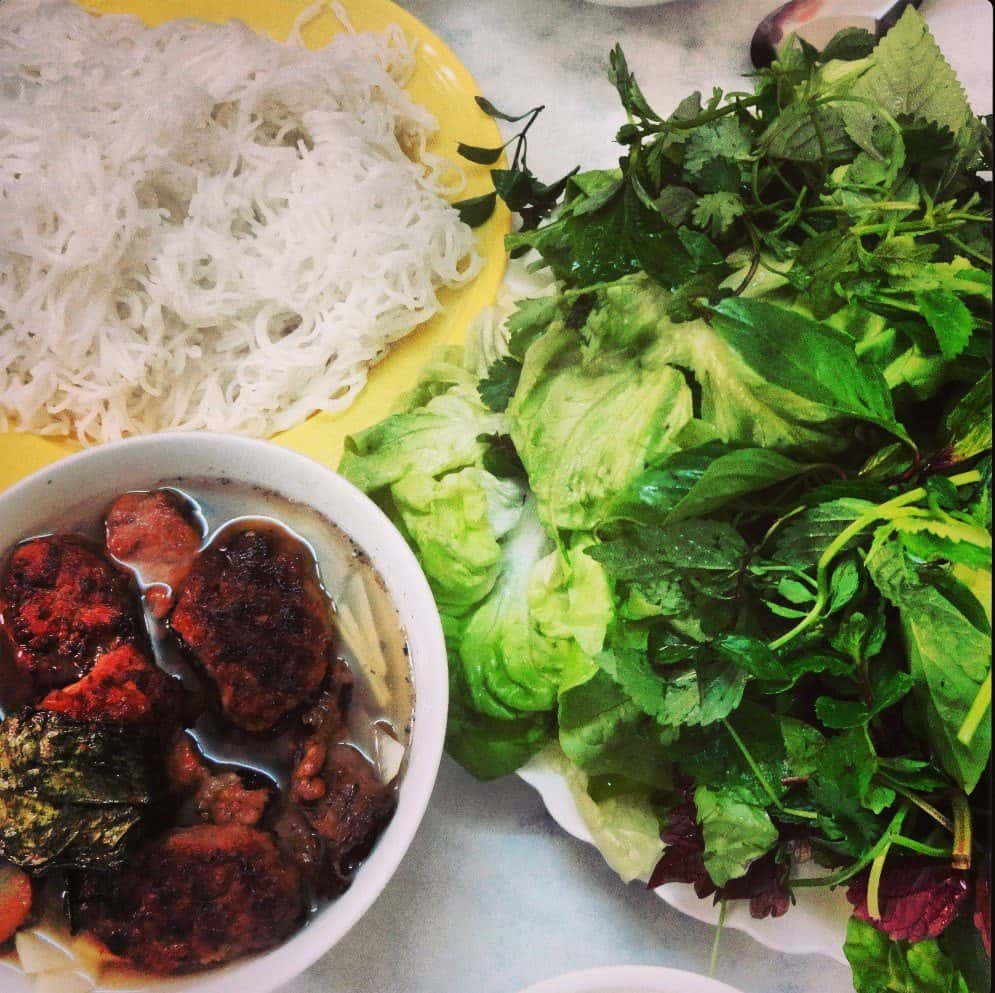 While this dish can also be found nearly anywhere, this restaurant has developed a reputation as the Bun Cha institution. The 4 or 5 floors are always crowded and spilling out onto the street with locals and tourists alike. For about $5 USD, a touch more than your typical street fare, you are guaranteed to leave full. A bowl of ‘bun’, rice noodles is placed in front of you beside another bowl of sweet and sour broth with perfectly char grilled pork belly and paddies floating in it. Don’t worry, the obligatory plate of herbs/greens is never far away. This dish is believed to have originated in Hanoi, so there really is no better place to try it. 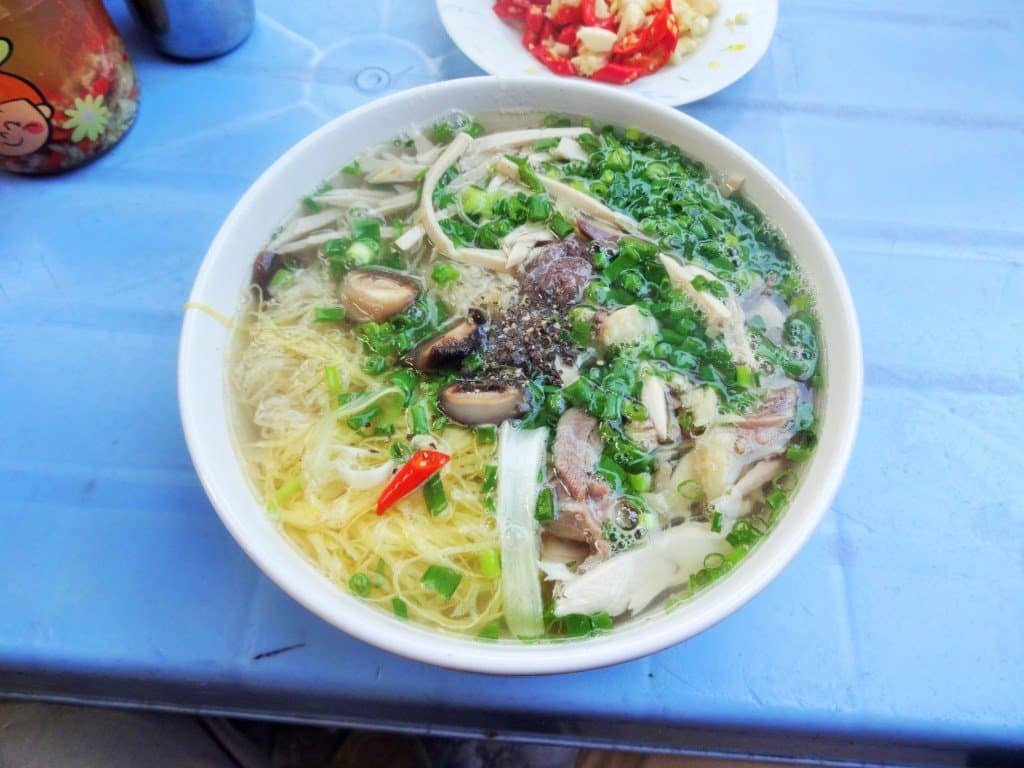 This chicken based rice noodle soup resembles Pho Ga, but it is worlds apart. Aside from a different rice noodle (bun), the toppings also differ from Pho Ga. Placed separately, the ingredients create a mosaic like design and are topped with an array of shredded chicken, pork roll, herbs/green onions, sliced omelette, mushrooms, and a small dollop of shrimp paste, which gives the broth its unique flavour when it is mixed in. The past isn’t overpowering, but gives it a touch of salty depth. 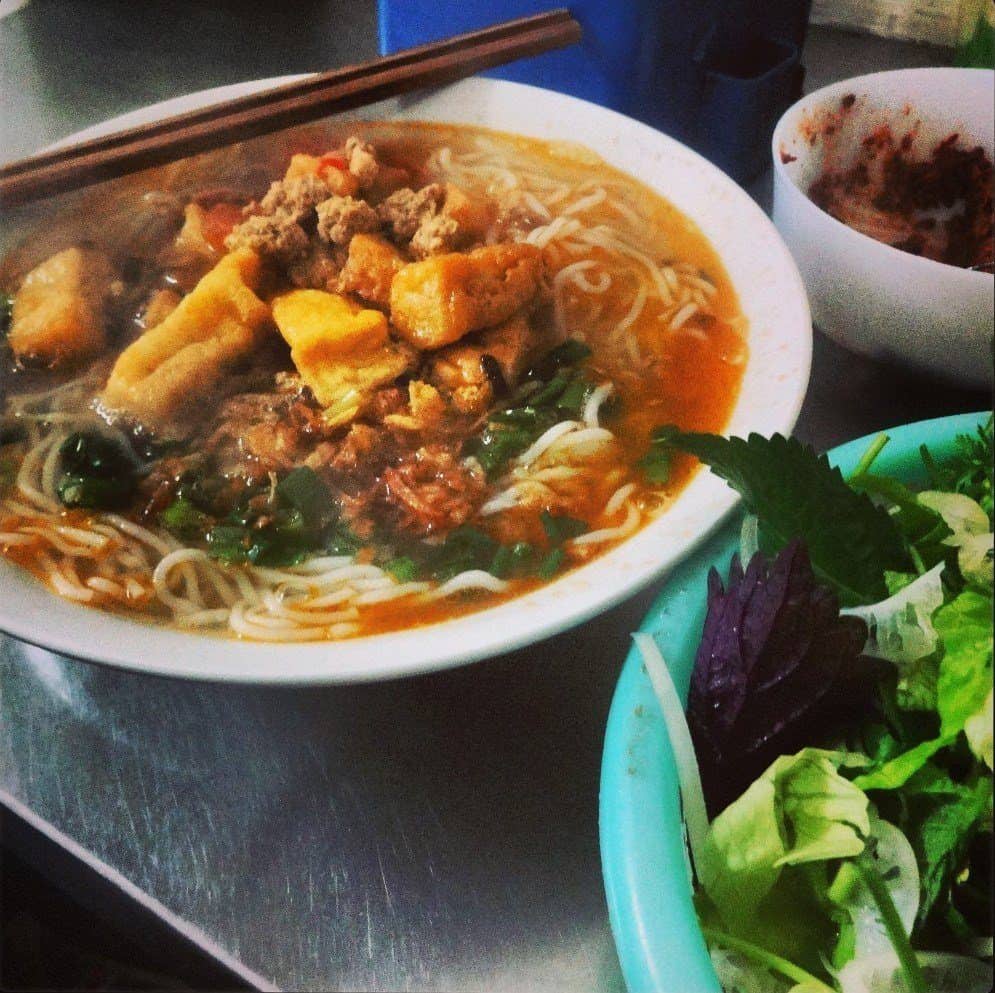 Another soup (you can never have enough soup in Vietnam), but completely different yet again, this dish is made with a crab and tomato based broth that has a slight sourness given from tamarind or lime. The small freshwater paddy crabs are used to make both the broth and fluffy crab like cakes that float in the red-orange liquid. Already a thing of glory, fried tofu and scallions are added, and its time to eat, but not before the condiments and herbs are added. Bun Oc, a variation of this dish, is made with snails instead of crab. 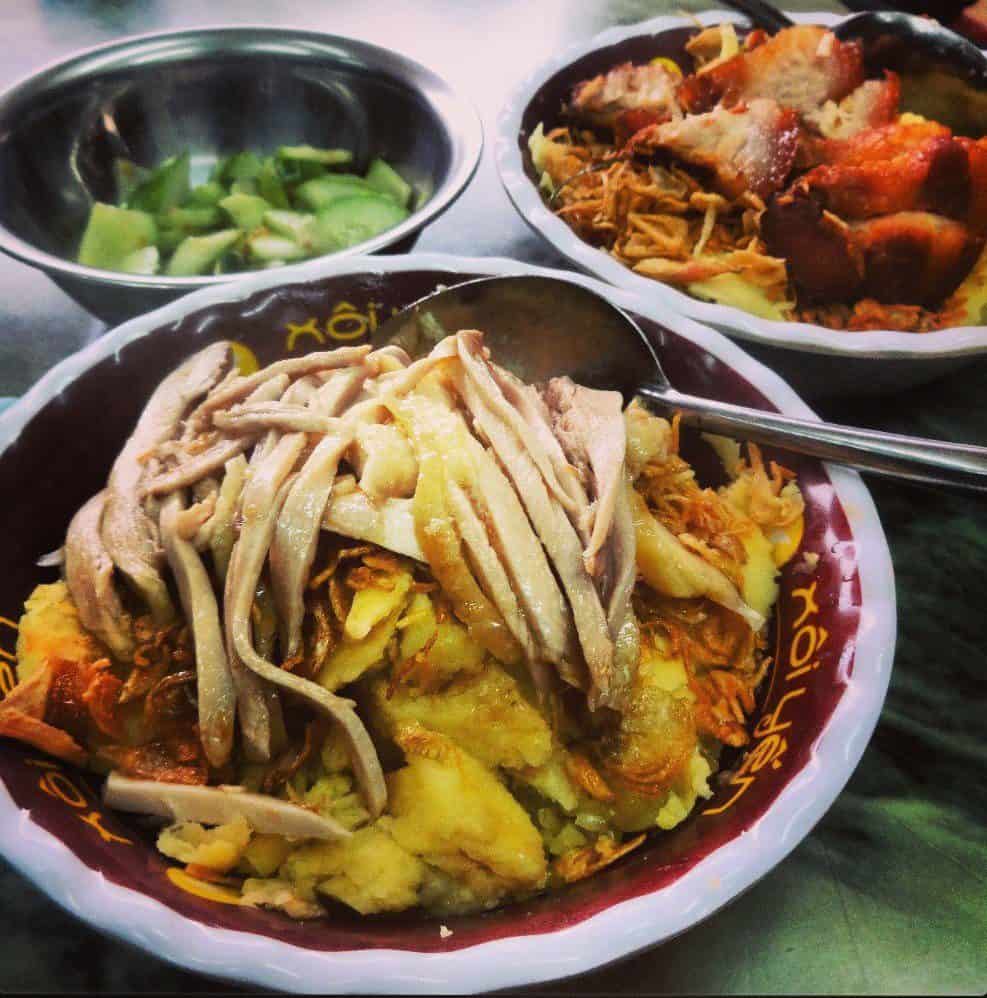 This restaurant was 3 or 4 stories of organised chaos and teamed with people in every corner.  On the main floor, production was a fine tuned assembly line with loaded bowls flying out. The place was packed with primarily locals. I ordered the basic dish to start, Xoi Xeo with chicken. Sticky rice with turmeric give the dish a pale yellow colour on the bottom, and a pressed mung bean paste is thinly shaved over the rice. Sliced chicken and a spoonful of fried shallots finish up one of the most seemingly simple dishes, yet the flavours and contrasts in texture are sublime. Accompaniments other than chicken include crispy pork belly, Chinese sausage and egg. 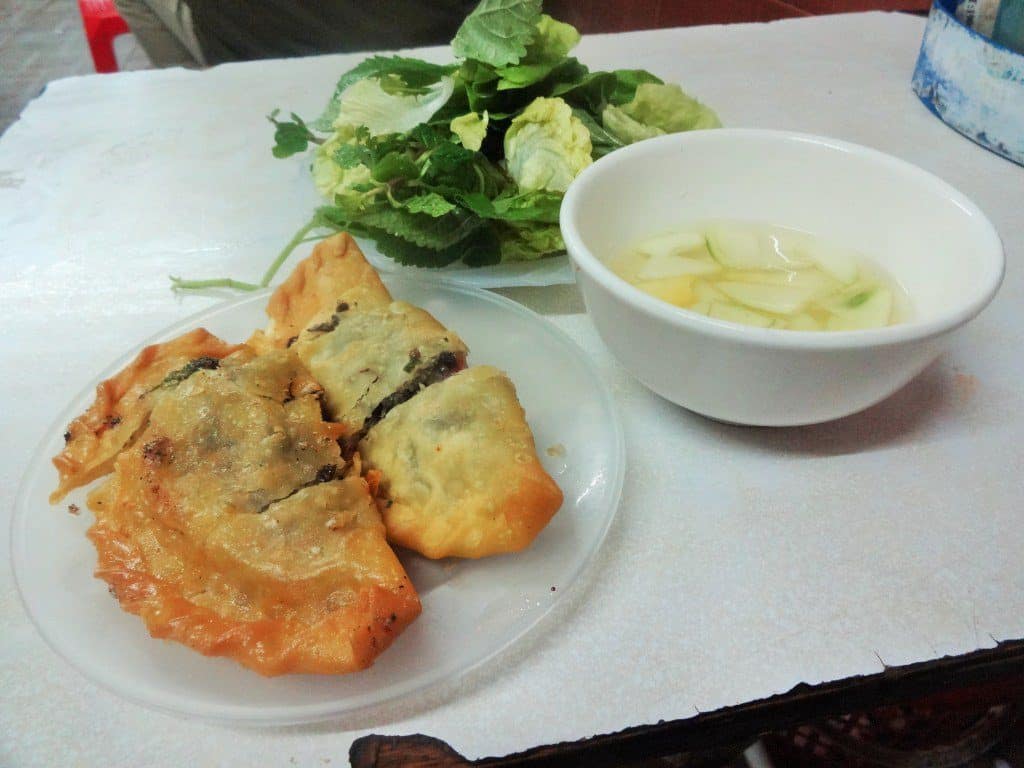 Also known as ‘pillow cakes’, the best way to describe this dish is as a Vietnamese empanada: a thin dough loaded with pork, glass noodle and mushrooms before being fried to perfection. Paired with a sweet and sour sauce with green papaya, garlic and chilies for dipping, the perfect light snack is laid out before you. 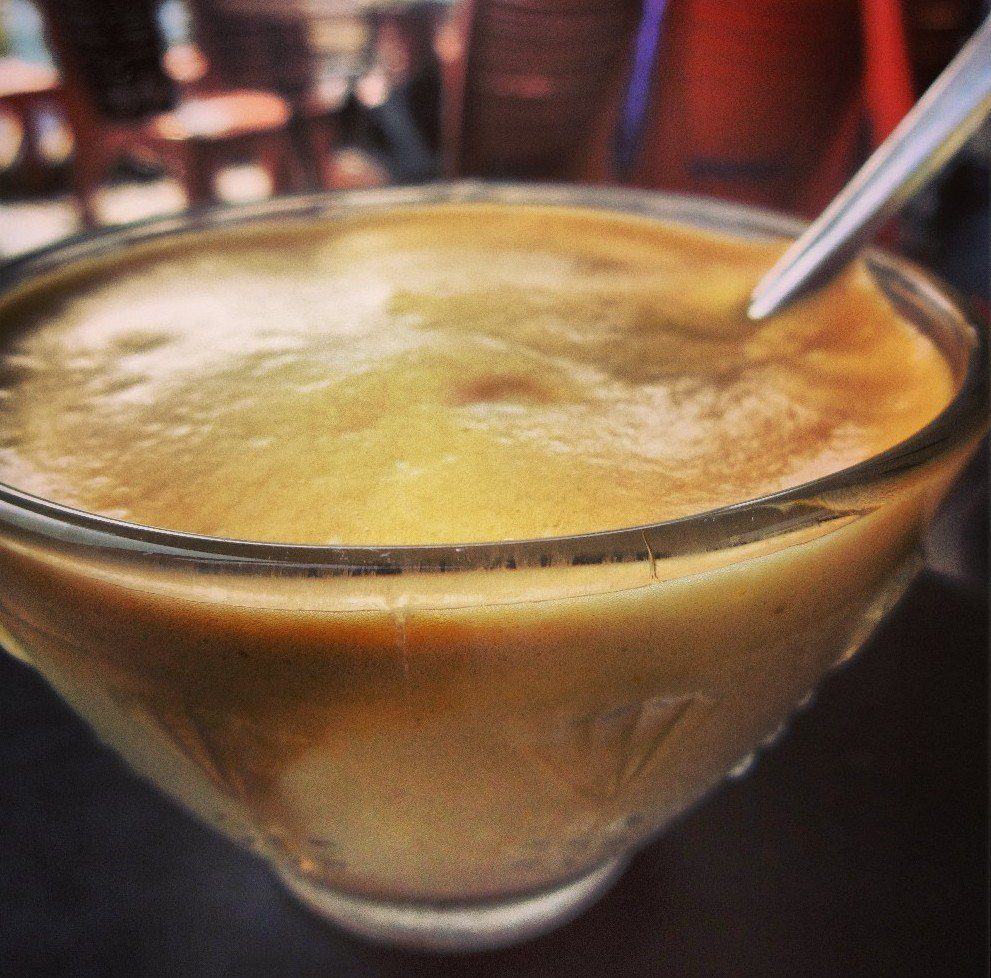 Originating in Hanoi, this unique take on coffee can be found across the city in numerous cafes. Egg yolks are tempered with sugar and coffee, and condensed milk and cheese are also possible additions. To me, it seemed closer to a coffee flavoured egg foam and was so thick I ate most of it with a spoon. For the coffee aficionado, it can’t be missed. 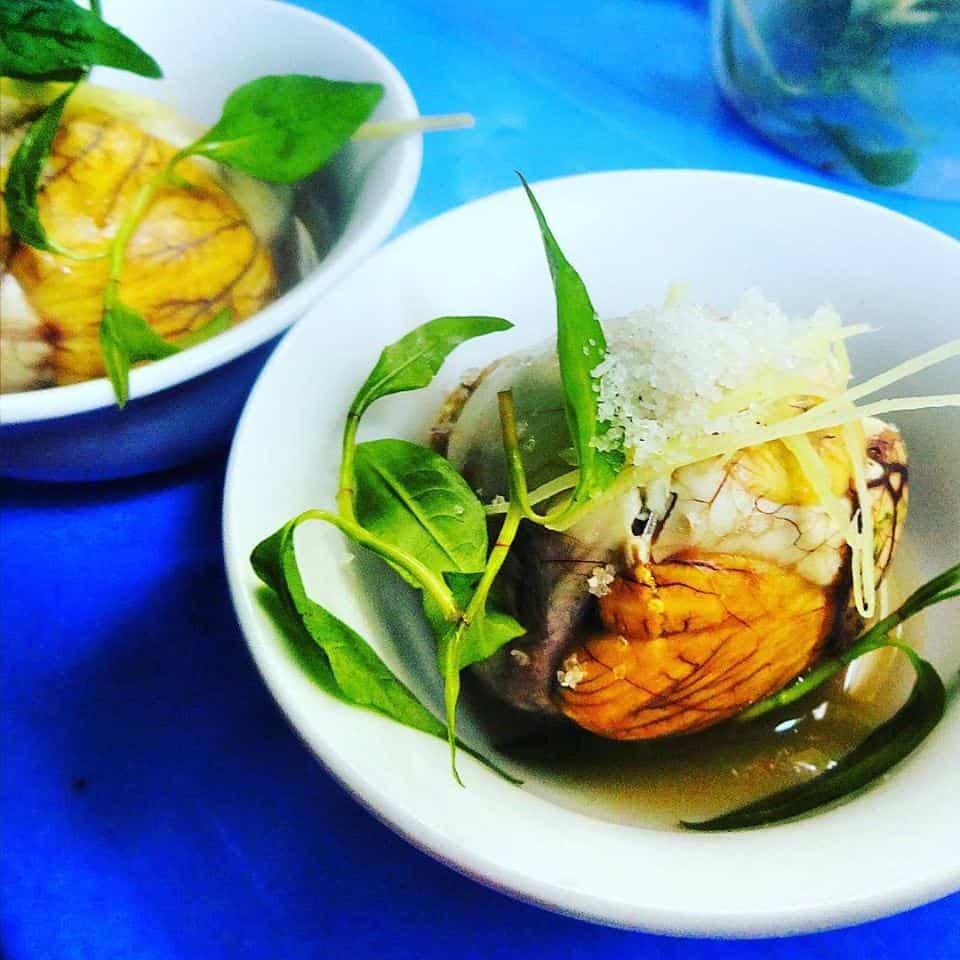 Known chiefly as a Filipino delicacy, this developing duck embryo also appears all over Vietnam. My first taste was here in Hanoi. The maturity of the egg is a matter of local preference. Hard boiled, it tastes similar to a regular egg with a couple different textures that likely aren’t common in your typical breakfast. Depending on maturity, the beak, bones and the odd feather may have begun developing. While not necessarily the most visually appealing in all its veiny delight, and you may have to do some searching to find it, it is definitely worth a try. 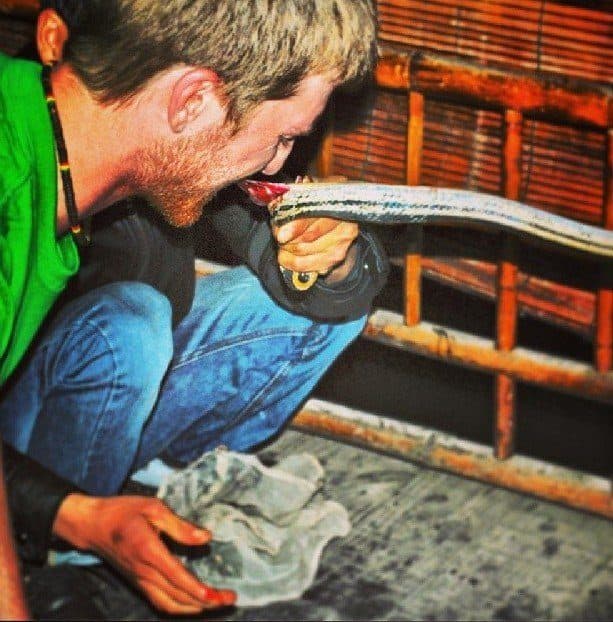 The snake village, only 20-30 minutes outside the Old Quarter, hosted one of my most unique meals. After the beating heart of the snake is swallowed by the guest of honor, the aperitifs are next. Snake blood and bile are mixed separately with rice whiskey and followed by 6-12 courses of snake in various preparations. Snake spring rolls, meatballs, ribs, liver/skin stir fry, and bones crushed with spices, just to name a handful. It was a memorable evening to say the very least.

While Hanoi is one of my favored cities throughout Vietnam, most, if not all, of these edibles can be found country wide. A full list of things to consume in this spectacular country would be unending and near impossible to complete, although it is definitely worth a try. This is just a short list to get you started on the culinary trail Vietnam has to offer, a path I hope to continue someday soon to satisfy that itch my palate gets from time to time.

And no, I didn’t forget Banh Mi, the best sandwich in the world. It’s just that the best one is in Hoi An. 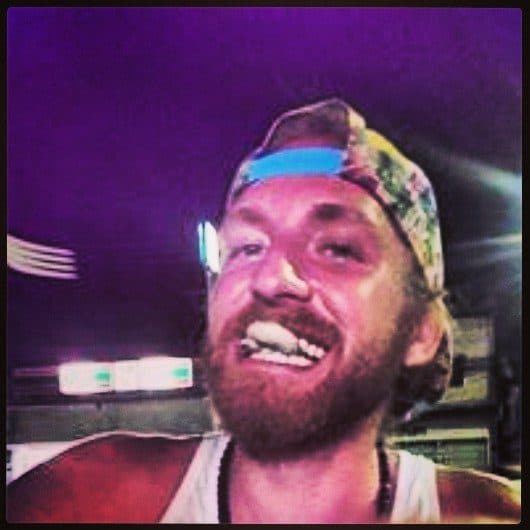 To sum up my life in a few words: cooking, eating and traveling. Cooking and wanderlust were embedded in me at a young age. I attended culinary school at the drug addled, booze soaked age of 19. All the while, the itch to travel more consistently was always there, but I didn’t know how to approach it and only took occasional vacations. After my apprenticeship, I took a hiatus from the typical confines of a kitchen and set out on a journey to discover a more global kitchen. I realized I could embrace all three passions at once, and I’ve never looked back. I’ve developed a love of all things Asian and am currently working/traveling in the Canadian Arctic. 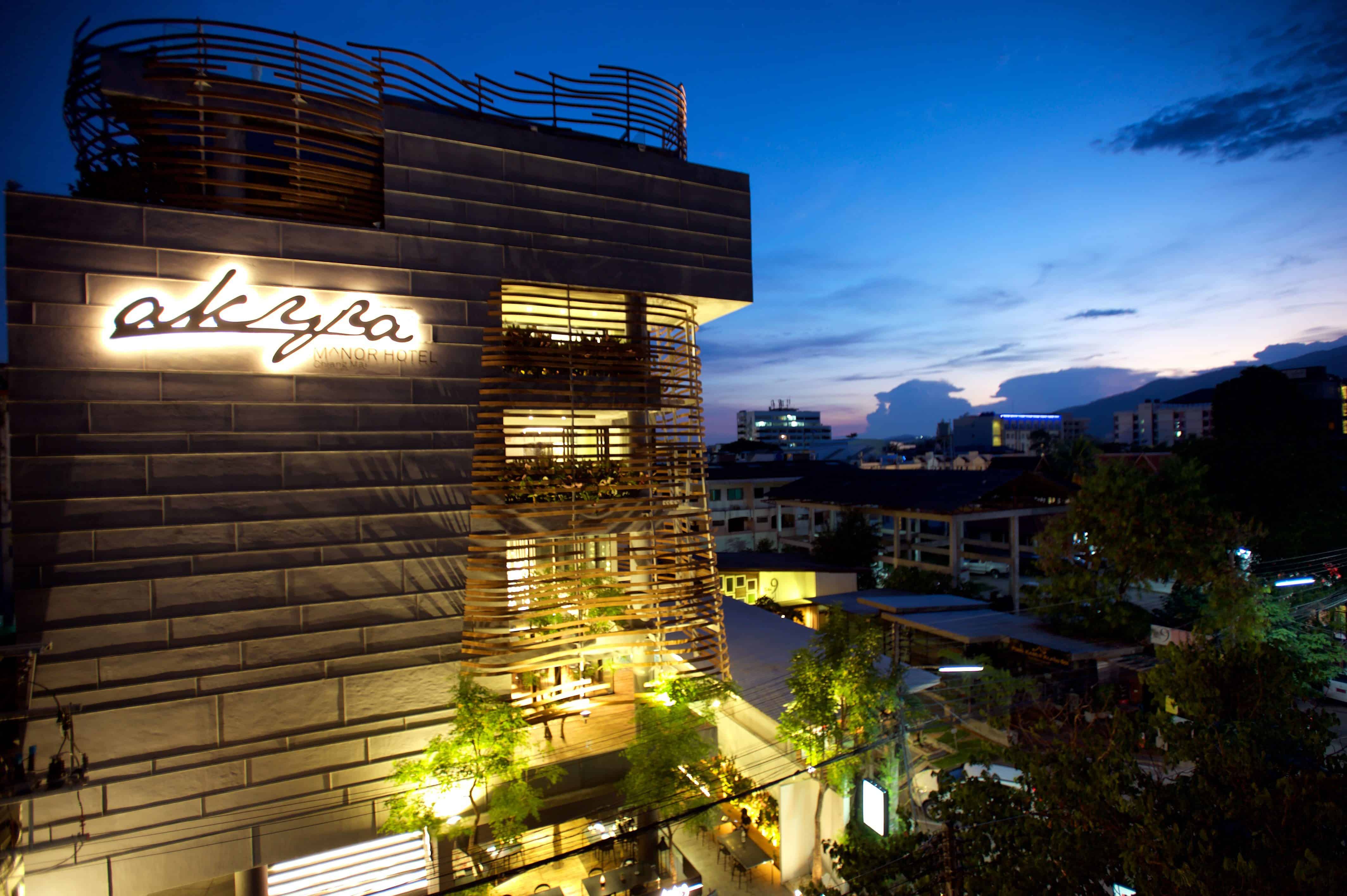 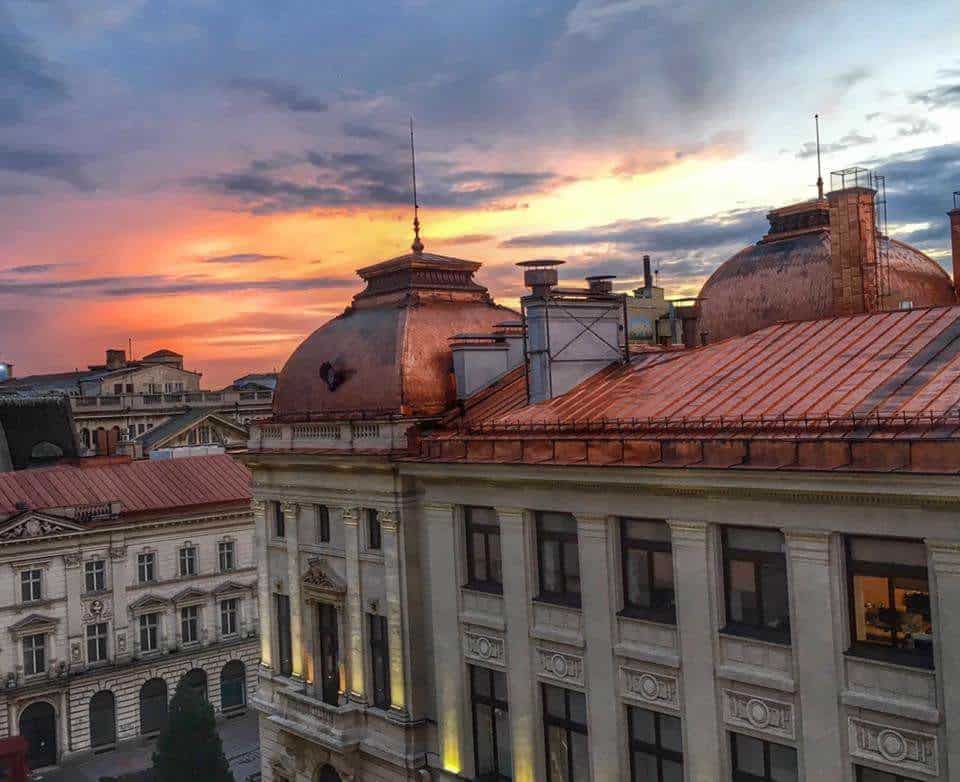 Oh, the dreaded Balut ... I feared it would be in this article. Takes a lot of guts ! The first and only time I tried my tongue dit NOT enjoy that bloody taste.

Oh yeah, I couldn't agree with you more that Balut is one of the specialities that you should try when coming to Vietnam. I rarely see bloggers include this dish in the food list; thus, I'm very happy and excited about reading your blog. I hope that you will give a new and different insight into Vietnam via your travelling experiences. One thing I'm not in favour of putting snake into this list. I think it's not appropriate and definitely Vietnamese people hardly eats dishes which are processed by snake. Anyways, thanks for your post!

That's interesting to know- thank you so much for the follow up! Maybe the snake eating is more for tourists.

We went to Hanoi just recently and we enjoyed sampling all the must-eats in Hanoi. Our favorites would be Pho, Bun Bo Nam Bo, Egg coffee and Vietnamese coffee with condensed milk. You’ll definitely enjoy your stay in Hanoi if you like to eat because every corner offers tasty Vietnamese dishes.

I love all of those except the sweetened condensed milk-- it's too sweet for me!

Thanks for the great recommendations. Which bahn mi shop is the best in Hoi An?

A coffee aficionado I am, so this egg coffee business has me intrigued!!! Vietnamese food is possibly my most fave of Asian dishes too, cannot get enough of it either. Loved this post, thanks for sharing.