A Walking Food Tour of Girona with Girona Food Tours 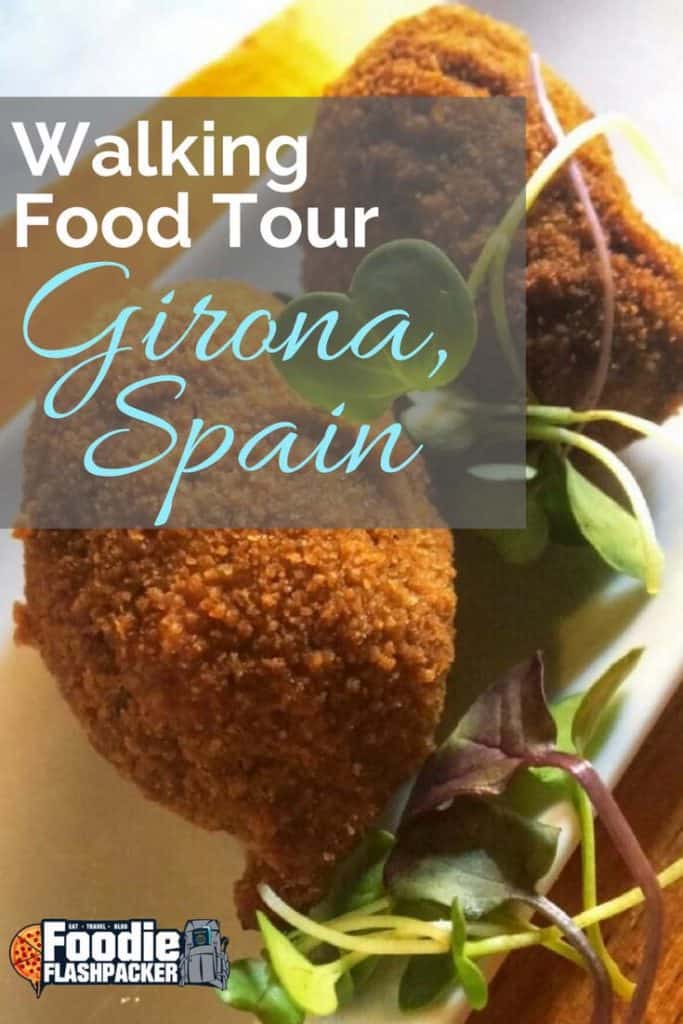 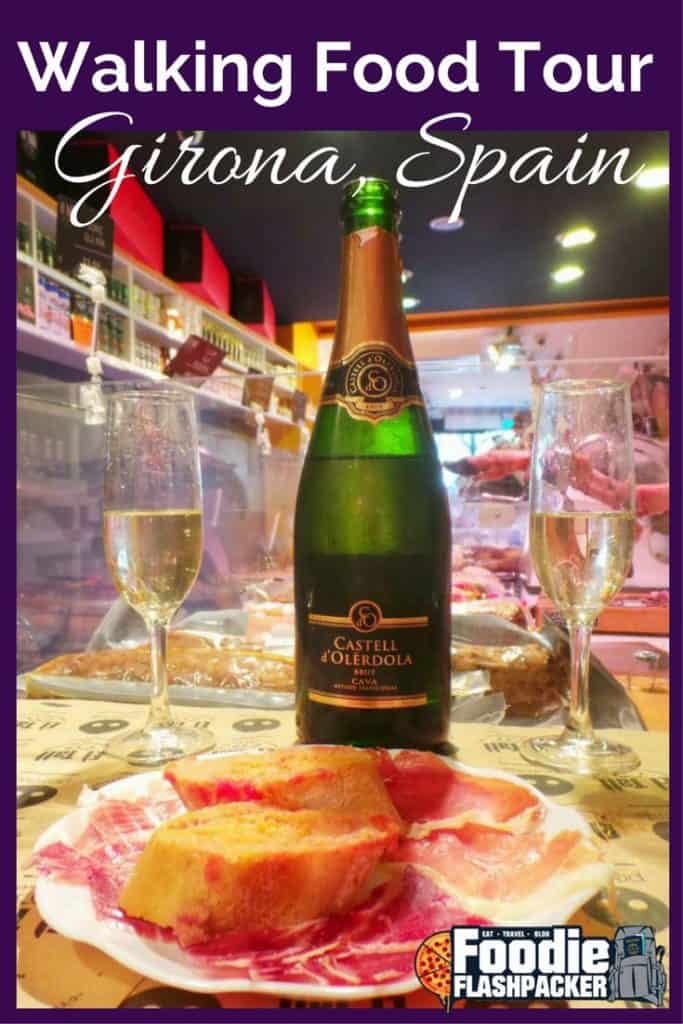 While in Costa Brava, I was based out of the city of Girona. One of the highlights of my time in the city was the walking food tour of Girona I attended with Girona Food Tours.

I met up with my tour guide Marc at his centrally located office, and together we set off to tour the city. I was fortunate, because the Costa Brava Department of Tourism had arranged a private tour just for me. The company is already known for their personalized tours, but this one-on-one tour gave us the freedom to be completely flexible, which I appreciated.

Marc isn’t actually from Spain- he’s Dutch, but he’s been in the Catalan area so long and has such knowledge and passion for not just city but the entire region that he’s considered a local.

As we walked toward our first stop, he was quick to point out several interesting city features I would have otherwise missed. His excitement was obvious and contagious.

We began our day the way locals typically do, with a coffee and something sweet, this time from a bakery that’s been around since 1892! 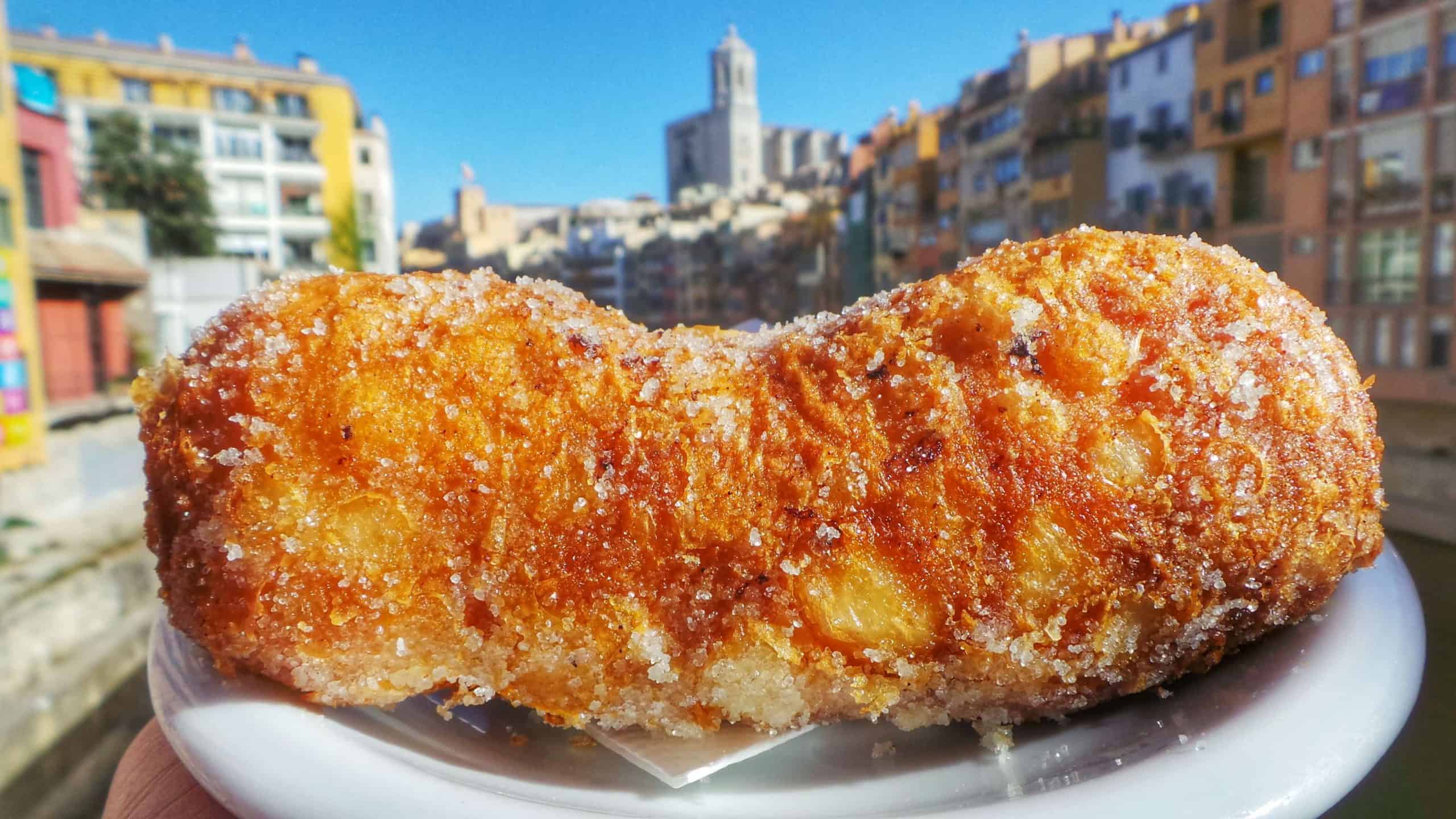 But this sweet breakfast wasn’t just any pastry- it was a xuixo, a legendary pastry created in Girona.

As I often say, I’m not much of a sweet tooth, so I didn’t expect to like this– it’s a fried dough pastry filled with crema Catalena (a local sweet cream) and dusted with crystallized sugar. Somehow, this deep-fried sugary breakfast comes off as almost light.

The pastry was flaky and the custard like cream filling was airy. I thought I’d only try a bite to be polite, but I nearly finished the entire thing!

Sufficiently caffeinated and sugared, we continued to explore the city, crossing the Iron Bridge featured on the Instagram of nearly everyone visitor to the city. 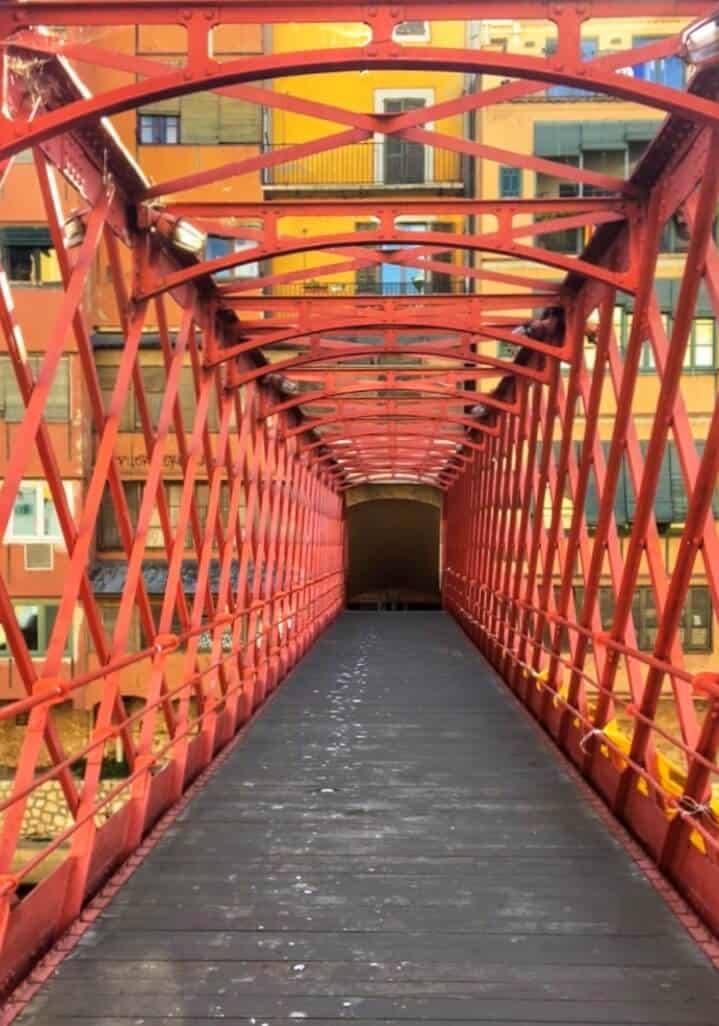 I learned the bridge is also referred to as the Eiffel Bridge, as its designer also designed the Eiffel Tower.

Next we made our way to the local market. This market is made up of sixty food stalls, most run by family owned, multi-generational businesses.

We walked along, checking out the offerings from various stands and occasionally stopping for a sample. All of the shop owners were friendly and ready to chat and talk about their merchandise.

As we sampled one stand’s sardines, I mentioned that octopus was my favorite. The owner quickly grabbed and sliced a choice piece, drizzled it with fragrant olive oil and a sprinkle of paprika, and offered it up to us. 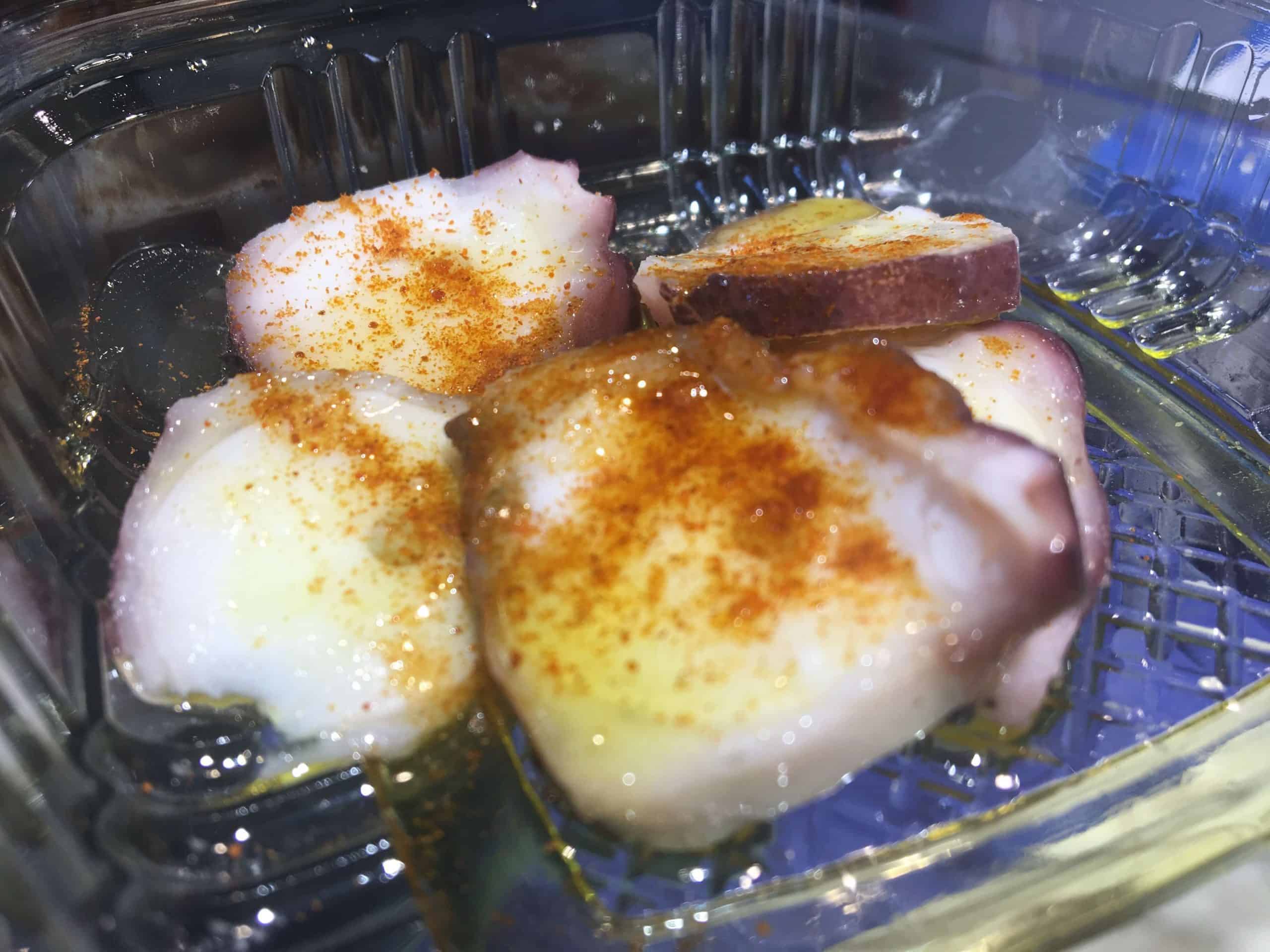 It was so simple yet so delicious and very generous of her to do.

Something similar happened when we visited another stand, this one selling sausage. The owner presented us with samples from several varieties of his homemade sausages. When I commented on how unique one sweet type was and mentioned that I’d never had anything like it before, the owner didn’t let me leave without taking some home . 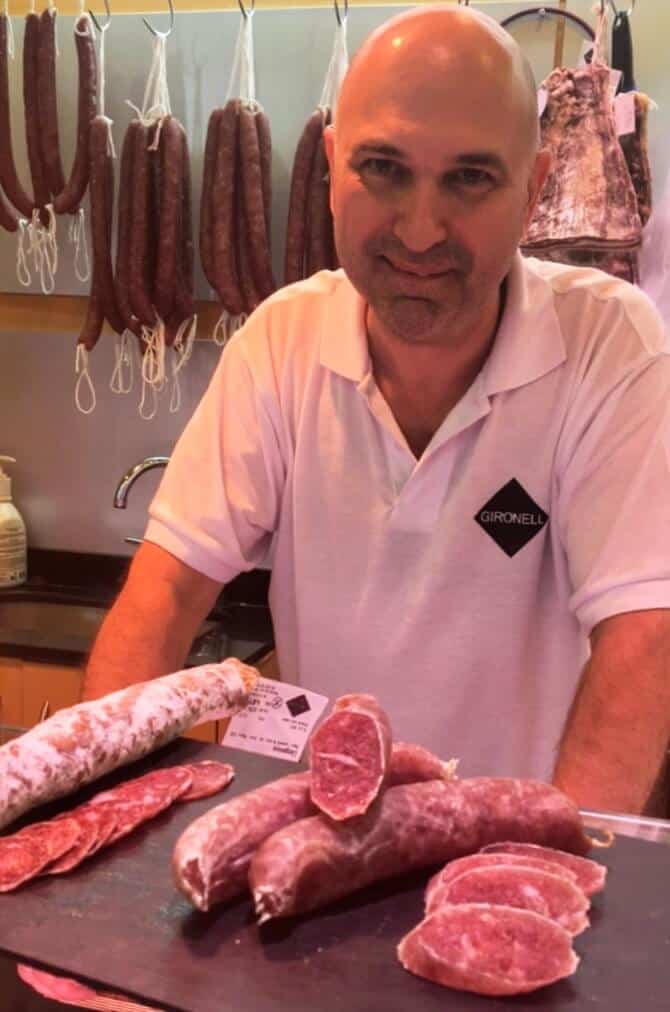 Again, this was incredibly generous and illustrates the pride the owners take in their work. It reflected how local and authentic this particular stop on the tour was.

Next, we made our way to the ham shop. 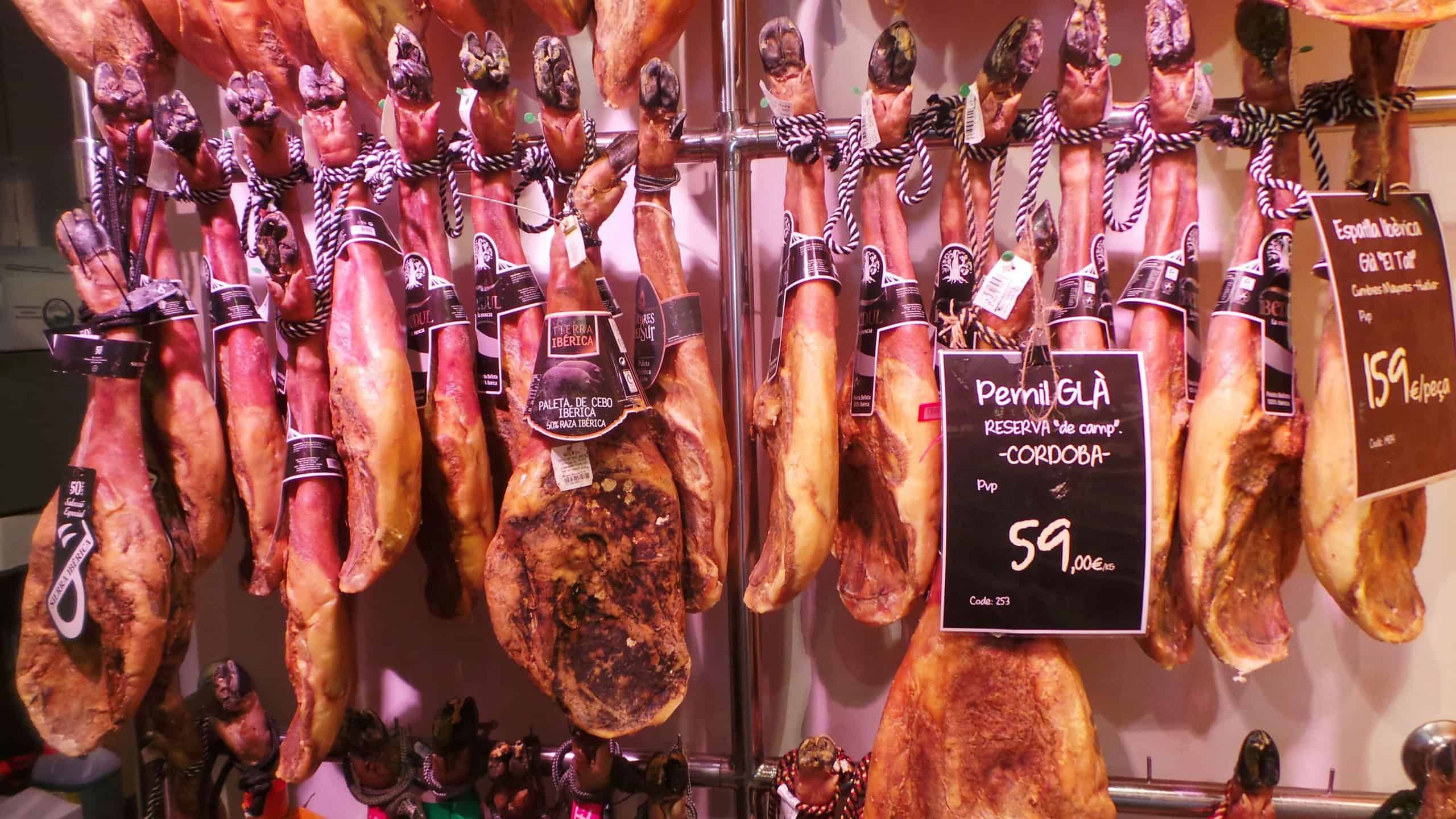 I had learned a quite a bit about ham on my walking food tour of Madrid, but this time I was also given lessons on how to slice a cured pork leg! 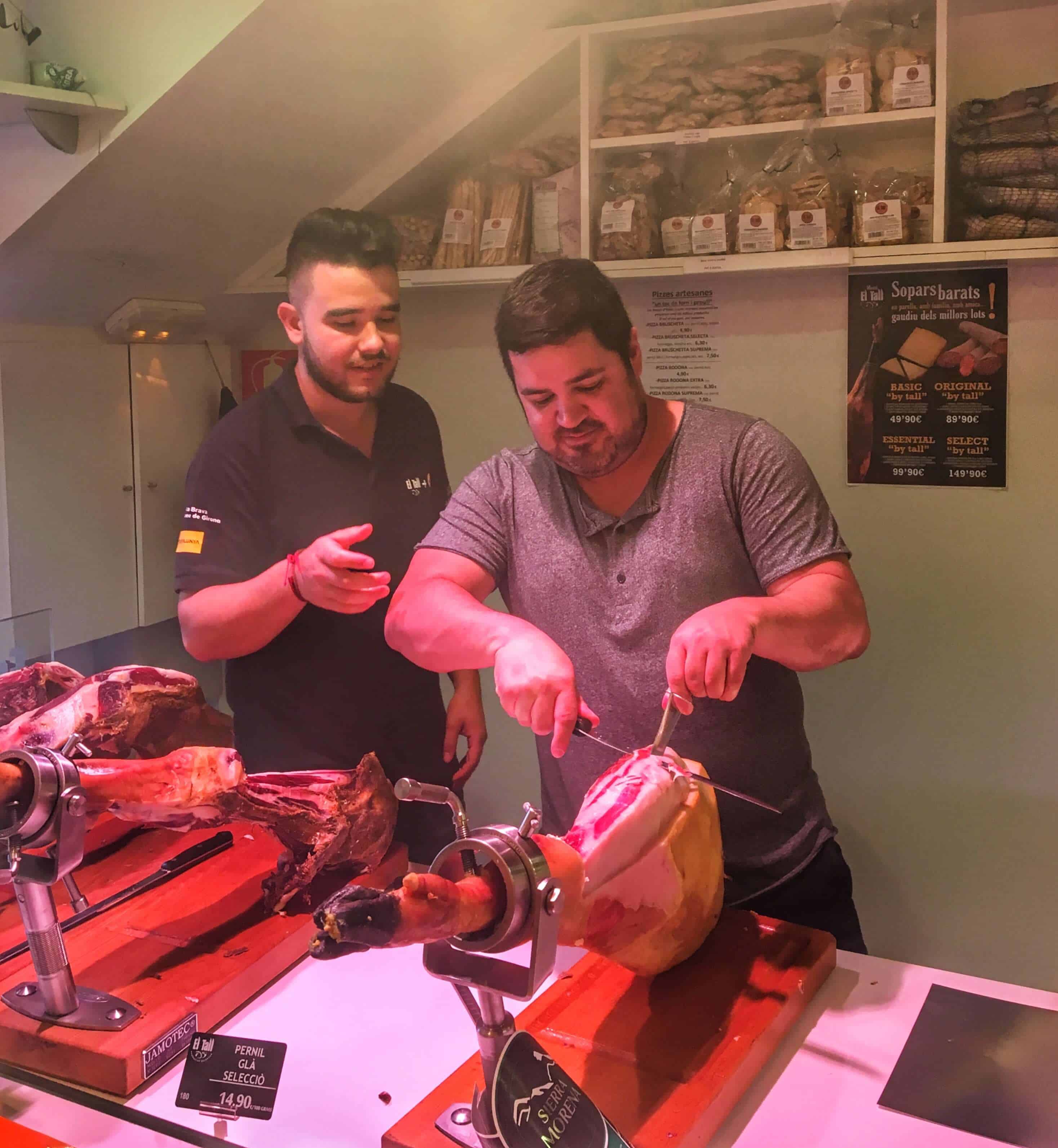 It was more difficult than I thought to get the near paper-thin slices I was used to eating. Fortunately, the employee eventually took over and made us a plate to sample, which he served with cava, a local sparkling wine similar to champagne. 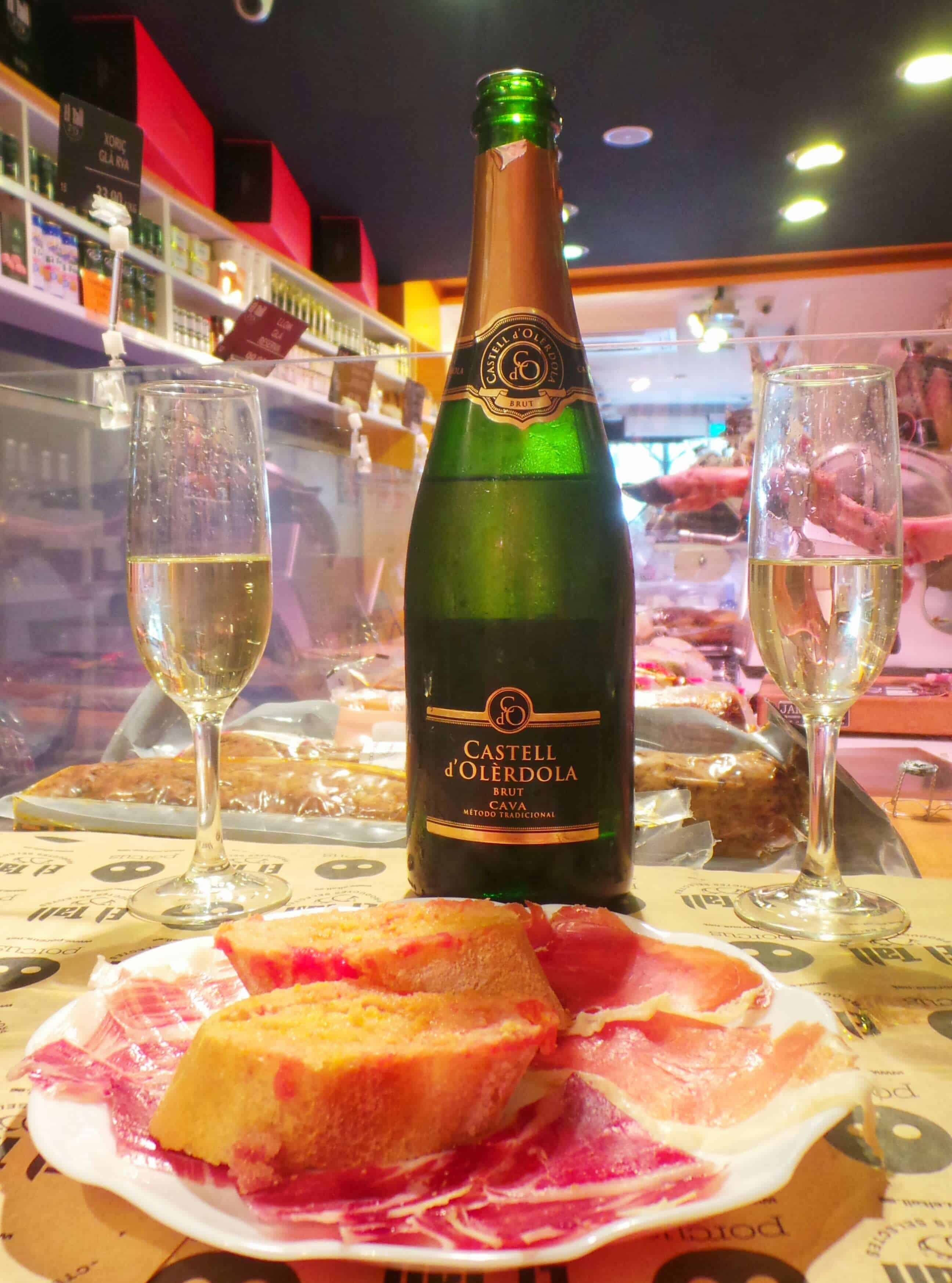 I have to admit, this was the first time I’d every had ham and champagne together, but it’s a great combination!

For lunch, we made our way back towards the city center to a small restaurant.

Up first was a dense and earthy mushroom croquette paired with a heavy local red wine. 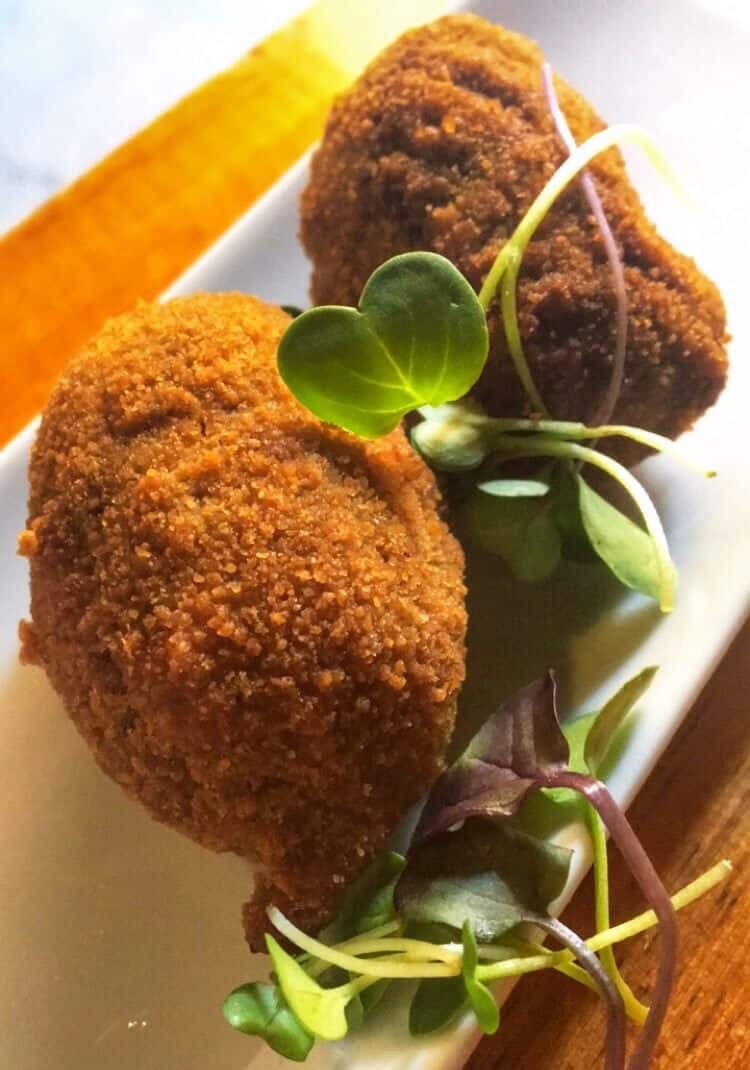 Next, a delicious homemade duck ravioli– 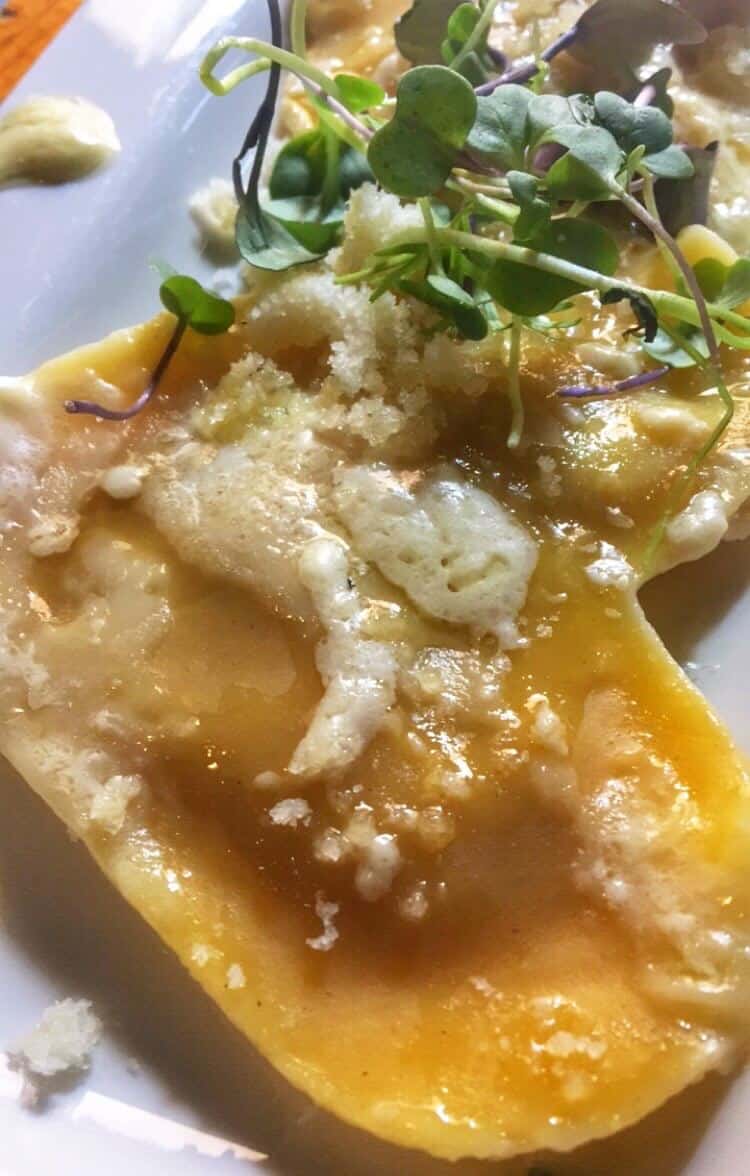 and finally, the main course- a perfectly cooked grilled sirloin served over roasted apples. And more wine, of course. 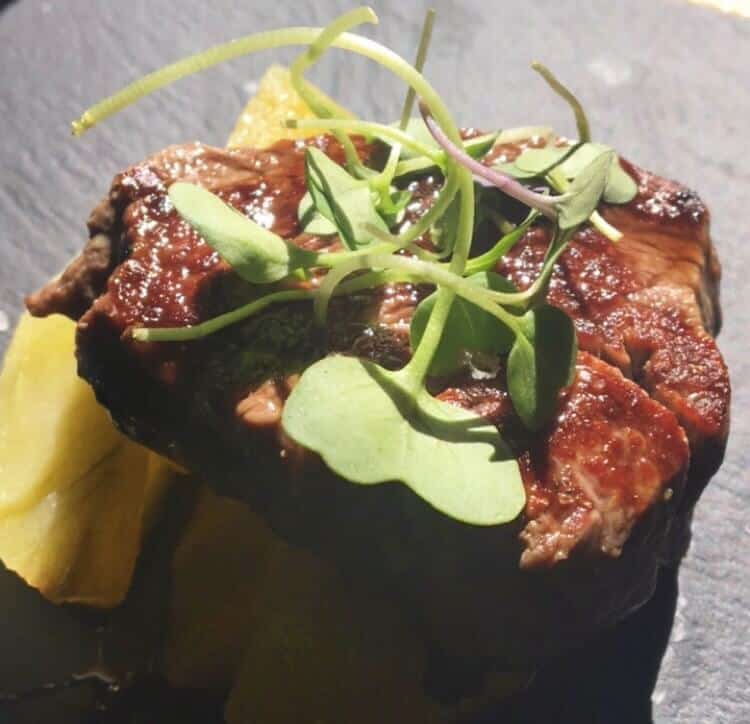 I’ve never had a steak served with apples, but the flavor combination was phenomenal, especially with the wine.

Rather than enjoying dessert at the restaurant, we added two final stops to the tour.

The first was a shop for traditional local candies, where we also sampled a local digestive. 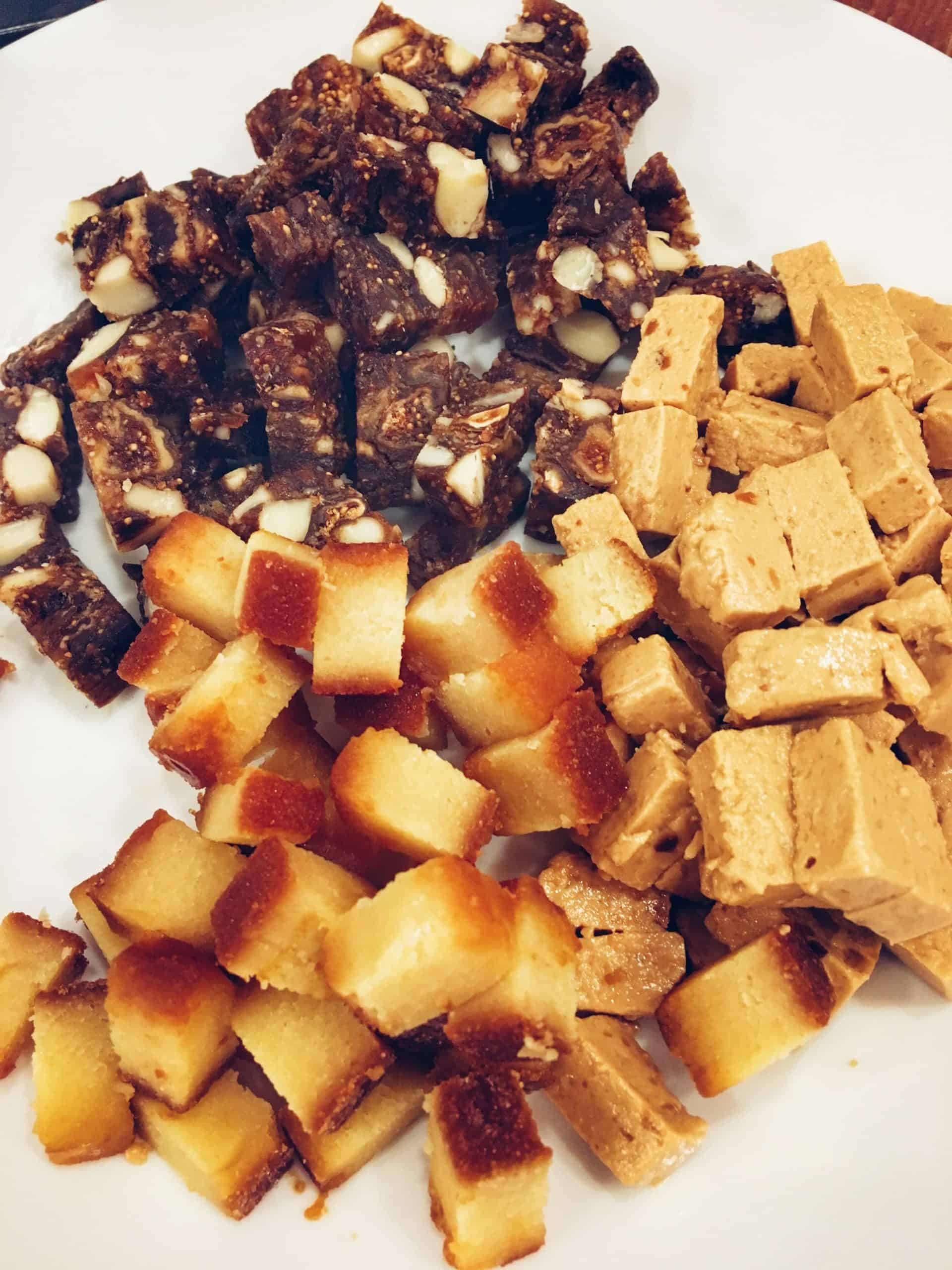 Two of these were too sweet for my liking, but the one with nuts was good- not overly sweet, more fruity and dry because of the nuts.

And finally, our last stop was for artisanal gelato. 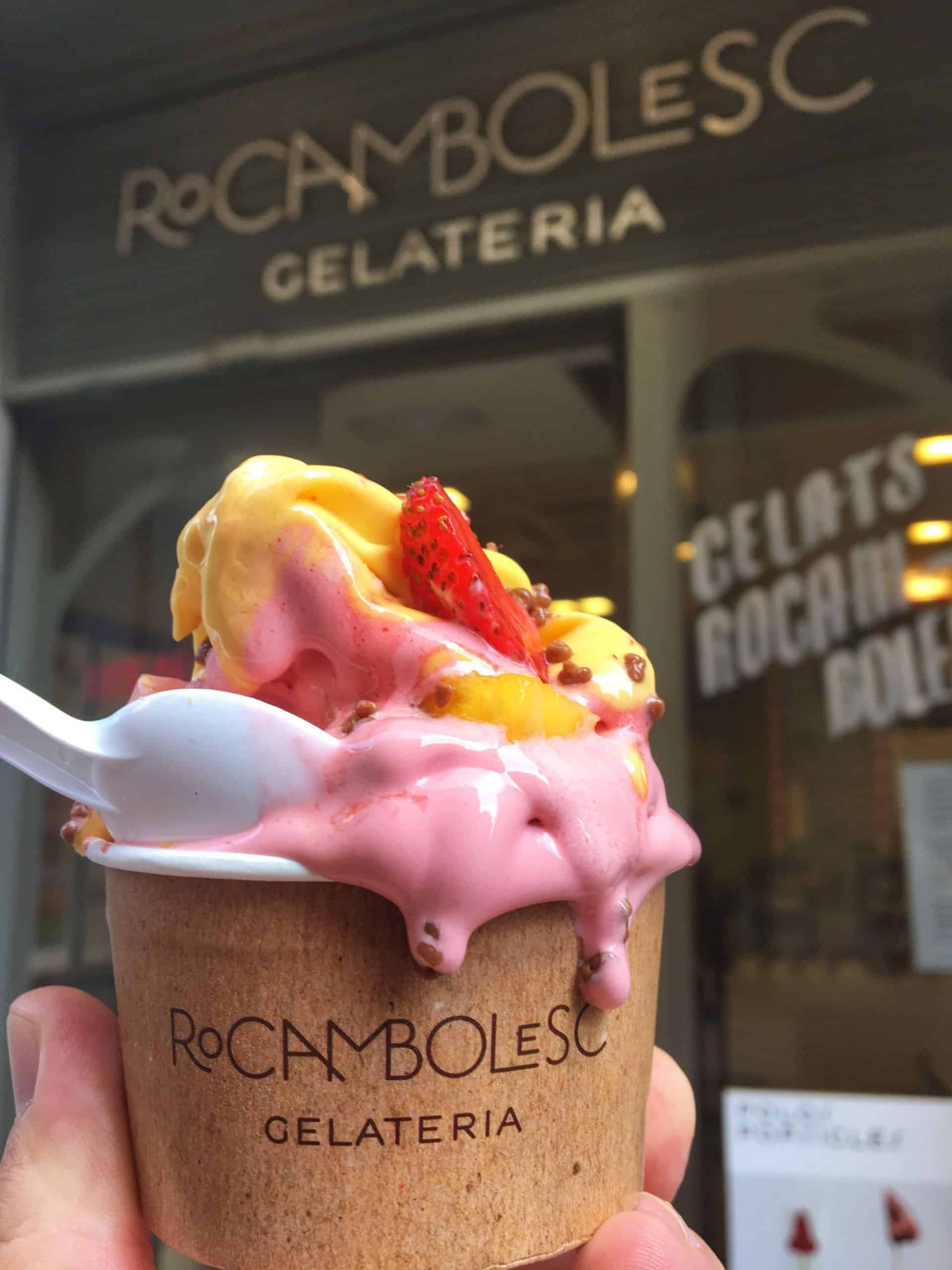 This gelato shop was created by one of the founders of the world-famous El Celler de Can Roca, twice named the best restaurant in the world. There, reservations must be secured nearly a year in advance, and apparently Julia Roberts had flown in specifically to dine there the week before I arrived in town.

I knew that if that restaurant opened a gelato shop, it had to be amazing- and it was!

In addition to the standard offerings of chocolate and vanilla, they also had options such as baked apple and an interesting sounding pumpkin carrot blend.

You can also customize and choose your toppings- everything from hand spun cotton candy to fresh fruit.

I created a delicious blend of fruit gelato and fresh fruit that was the perfect sweet ending to a day spent exploring one of my new favorite cities in Spain.

Which dish looked best to you? Would you love to take part in a walking food tour of Girona? Let me know in the comments section below!

Practical Information: This tour is an excellent option if you’d like to get a historical overview of the city while trying some of the best local dishes. To book your own tour, visit the Girona Food Tours site by clicking here.

Disclaimer: I would like to thank Girona Food Tours for having me as their guest on this tour. All opinions remain my own, as always.

Man, that looks absolutely delicious. I try to do food tours every time I visit any country. You tend to learn a few things while eating, pay more attention.

You're so welcome. I'm glad you found it useful!

Lynda- the tour is a half day tour. I included the links so that you're able to check out the site yourself. I took a personalized tour so my start and end times may vary but we met for breakfast and ate our way past lunch! Also, his site will have the most up to date pricing information on it. I hope you enjoy the tour- it really is great!

Whoa, this post really made me hungry, too bad I only have 10 pesos for my monthly allowance : (