A Walking Food Tour of Athens With Culinary Backstreets 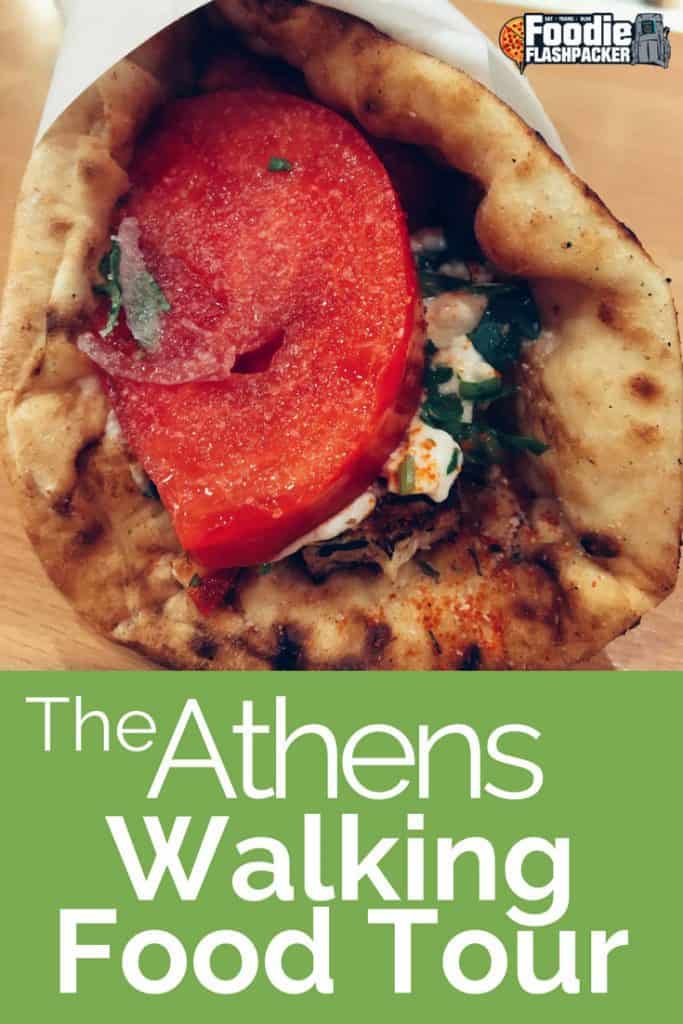 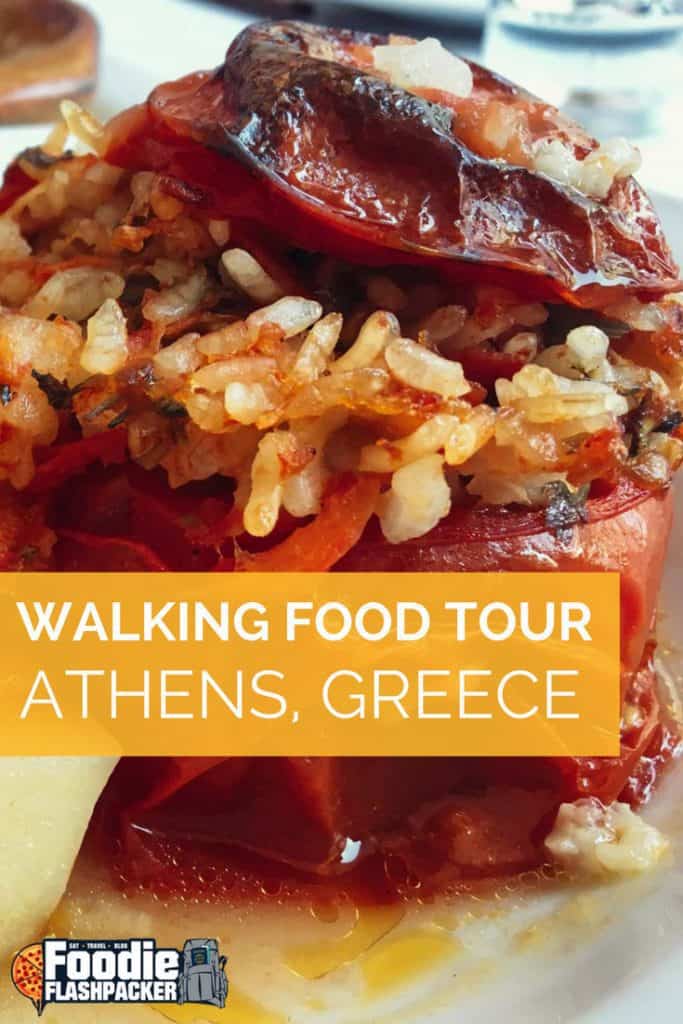 If you follow my blog, you know that one of the first things I do when visiting a new city is to find a walking food tour. This time I’ve teamed up with Culinary Backstreets to tell you about their walking food tour of Athens.

First off- if you’re reading this post and considering booking the tour- they mean what they say when they advise you not to eat breakfast. This is a tour you’ll definitely want to show up hungry for and definitely won’t go hungry from!

Our first stop was for a favorite snack for the locals- koulouri. 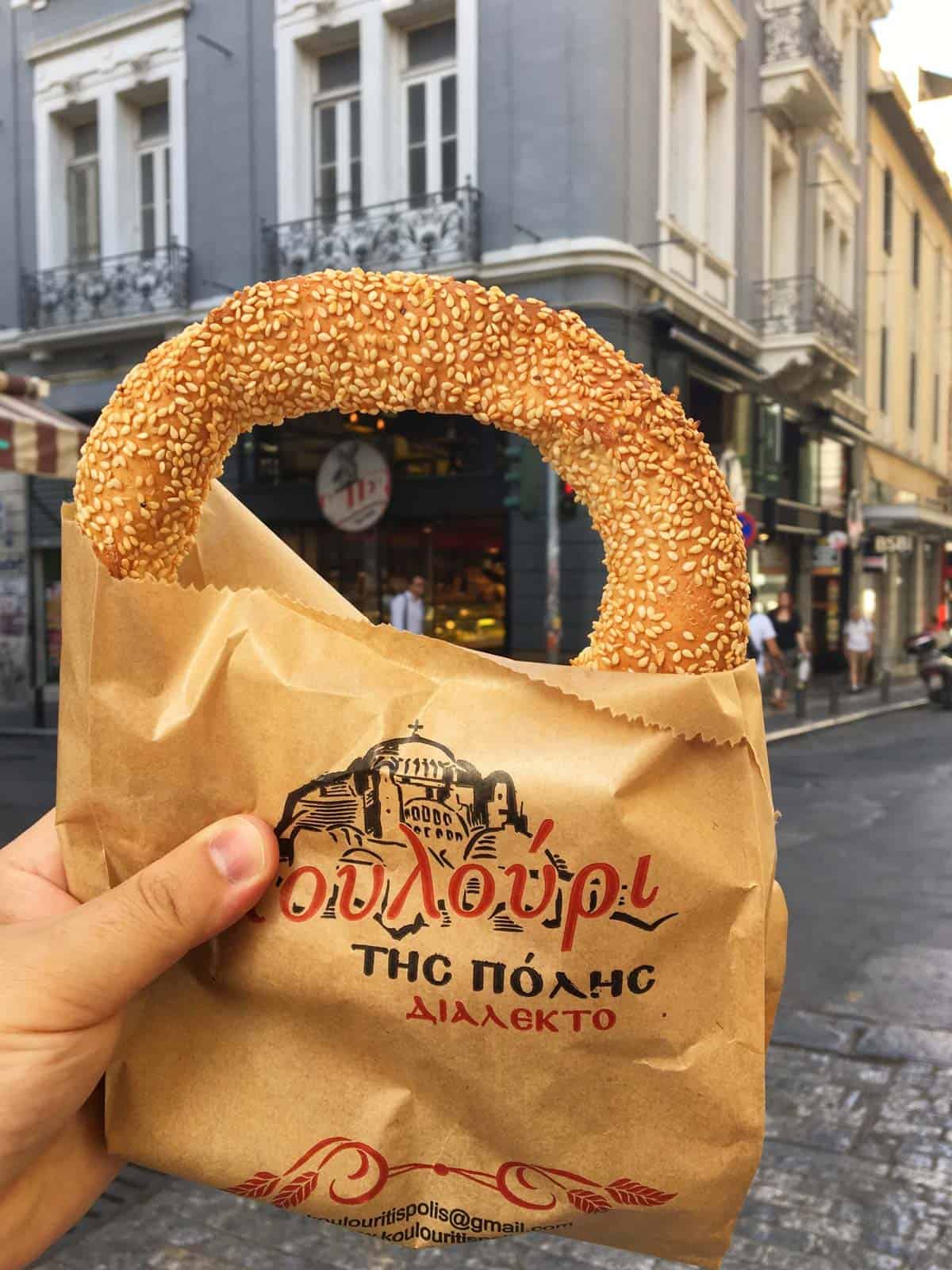 Koulouri reminds me of a pretzel covered in sesame seeds or the simit I tried on my walking food tour of Istanbul. This is an on the go snack locals typically eat while trying to get to work. Our guide joked that the typical Greek breakfast is a coffee, a cigarette and maybe a koulouri.

To be honest, though, I didn’t love it. I found it dry, but I can see how it serves as a great quick snack.

As we made our way to the next stop, our guide explained that Culinary Backstreets avoids tourist trap restaurants and warned that the restaurants with people standing outside trying to coax you in are not authentic. Also, apparently if a menu has photos of the food on it, it’s not local- Greeks hate this, because they already know the food.

We next stopped at what is considered the best bakery in all of Athens. It’s so good, in fact, that the owner believed that bread baked right could cure diseases! He would even wear a white gown and became known as the bread evangelist.

Of course, because I don’t have a sweet tooth, I favored the savory dishes. The spanakopita, or Greek spinach pastry, was delicious. The crust was flaky, and the spinach was perfectly wilted. I had tried a version of this before, but this was the first time I had it with a dill- that made for a nice change! 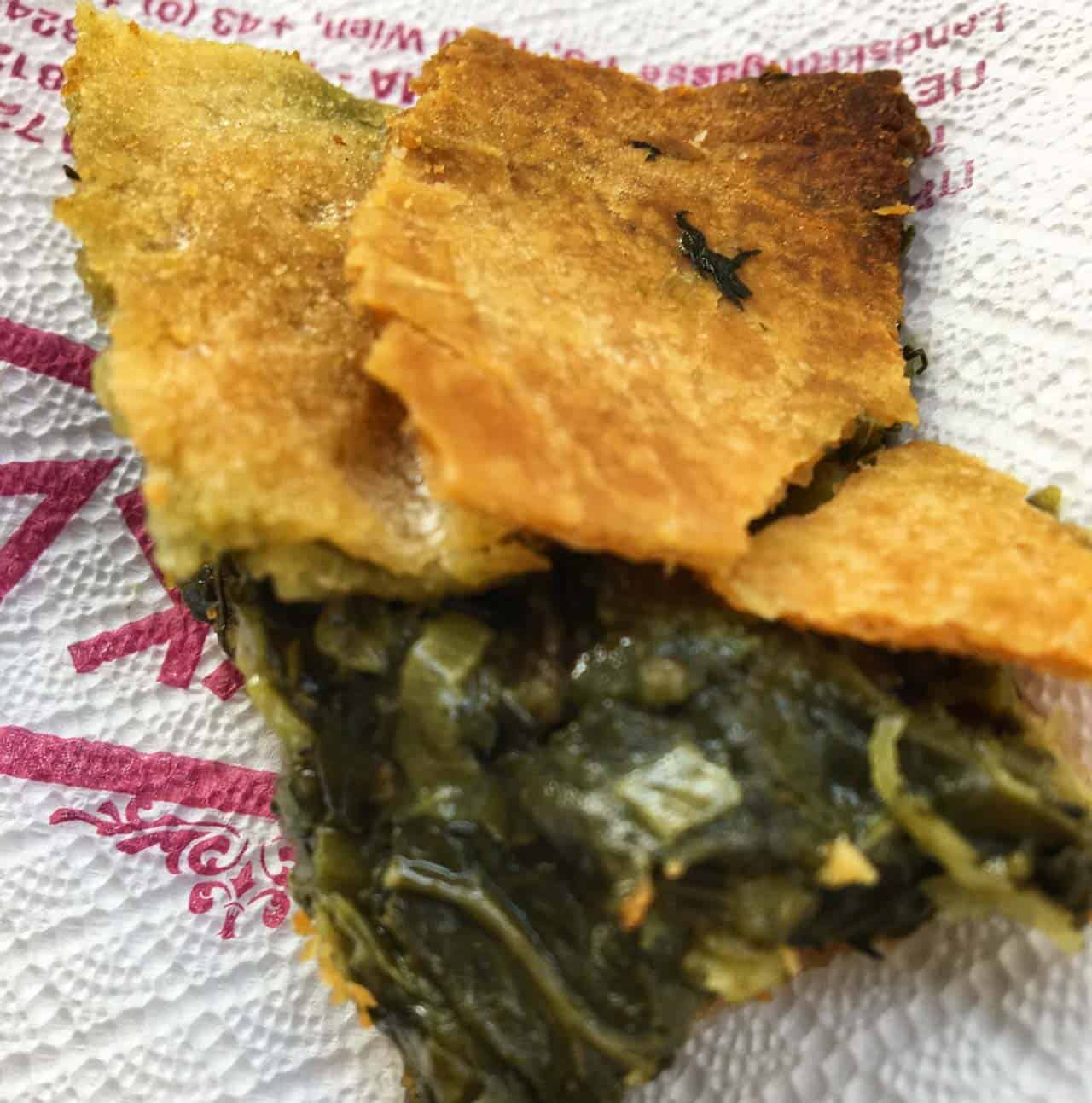 The spanakopita was my favorite until we were served the tiropita, or Greek cheese pie. This dish had nearly the same crust as the spanakopita, but inside it had a cheesy, melty filling and was served warm out of the oven. It was hands down my favorite dish from the bakery! 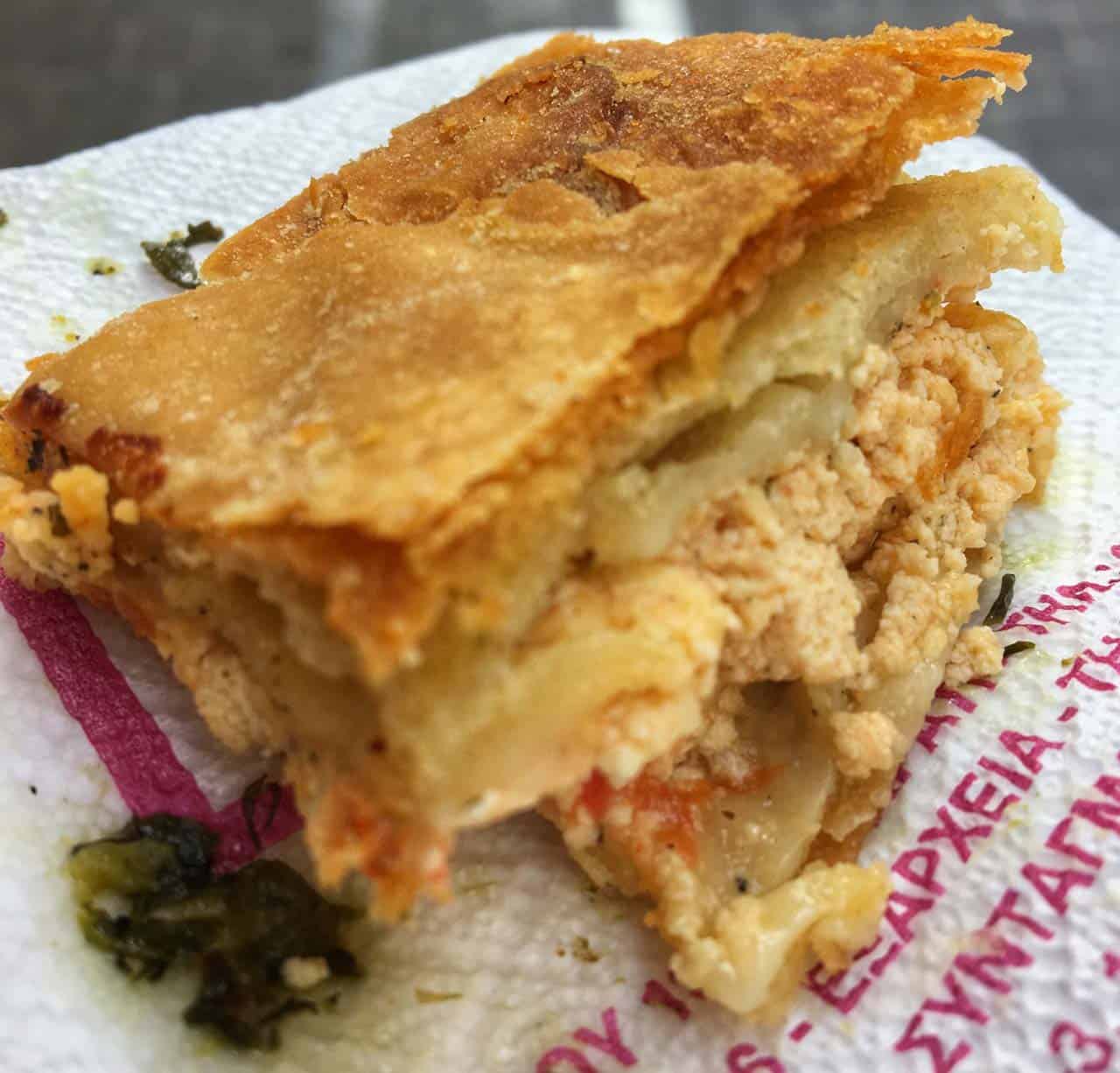 We also sampled several of the bakeries sweet offerings, which everyone who likes sweets really enjoyed. 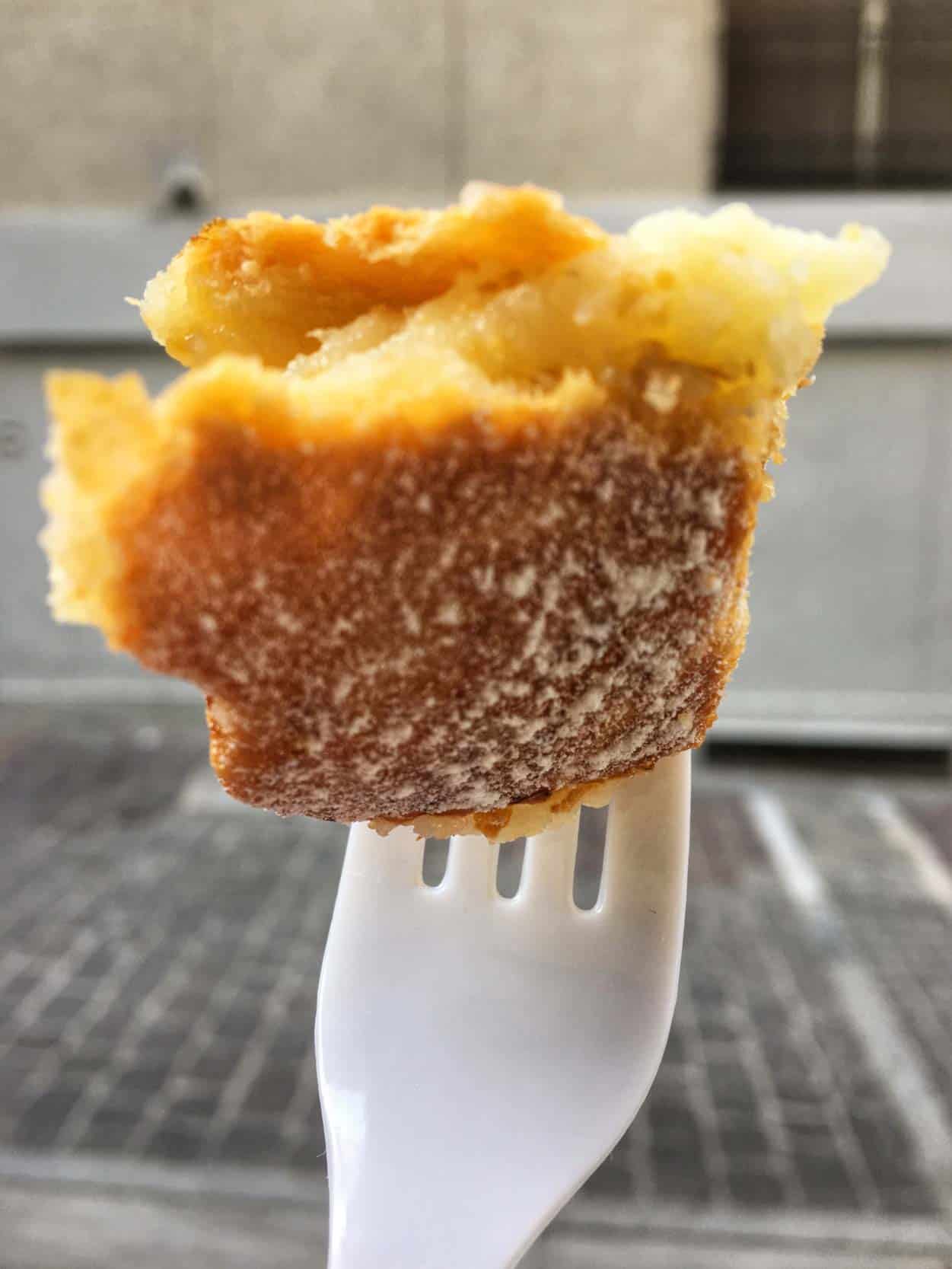 We continued along to a small park outside of a church, where our guide presented us with a homemade treat- koliva. 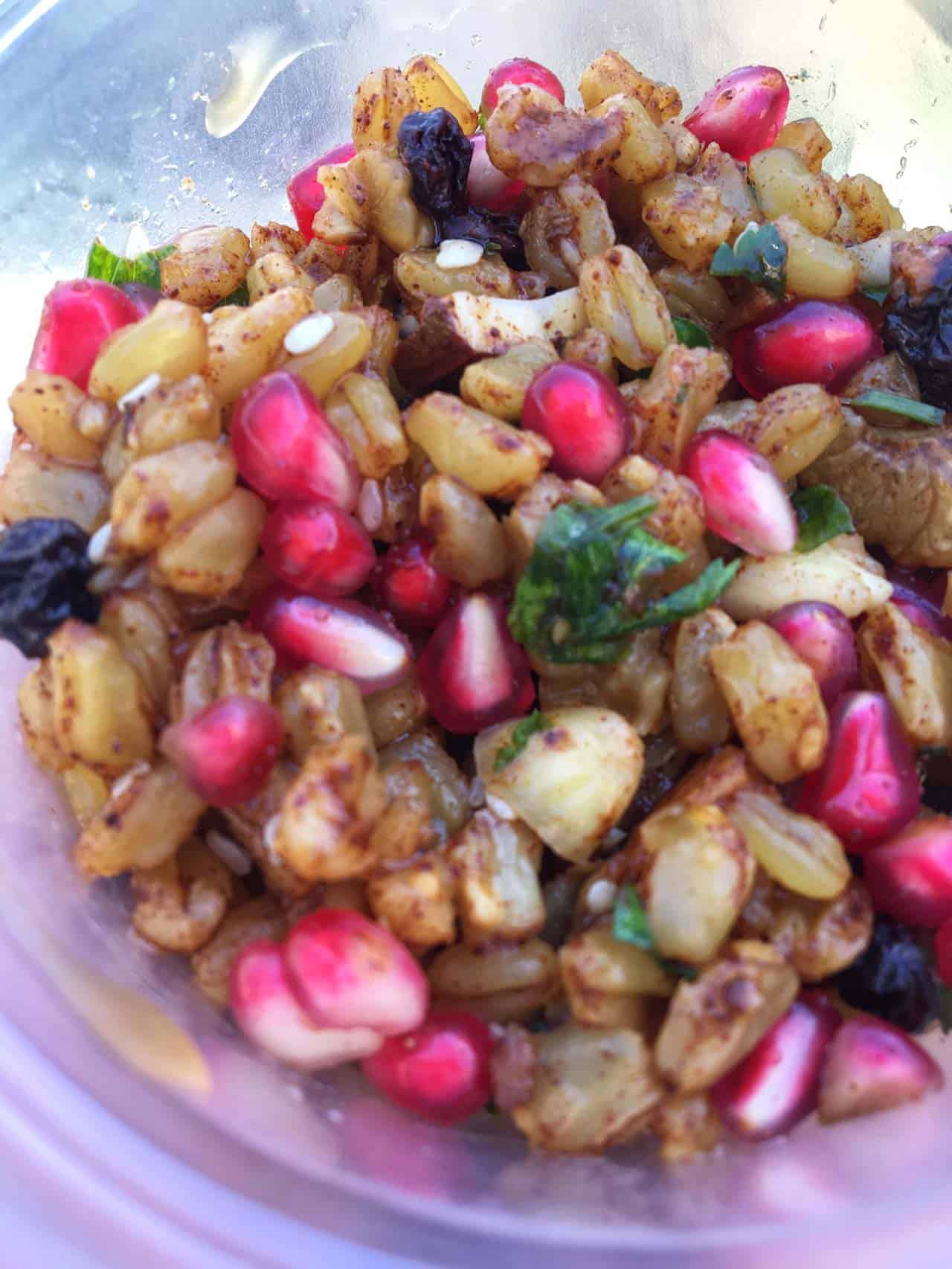 Koliva is a mixture of wheat berries, toasted nuts and dried fruits. This version even contained fresh pomegranate seeds.

The snack was very delicious and something I would love for breakfast, although it’s typically a food served at funerals. The ingredients are sybolic- the wheat berries represent the promise of everlasting life, the fruits the sweetness of life, and the spices are symbols of plenty.

It was especially nice of our guide to make koliva for us, as apparently the dish takes 2 days to prepare. Time well spent though- it was both fresh and light.

Next we made our way to a Greek deli shop to sample a variety of local products. Our guide told us he usually buys from this shop, so it’s very local and authentic.

As the shops owner prepared our dishes, we started with a shot of a local liquor similar to the raki I tried in Albania. 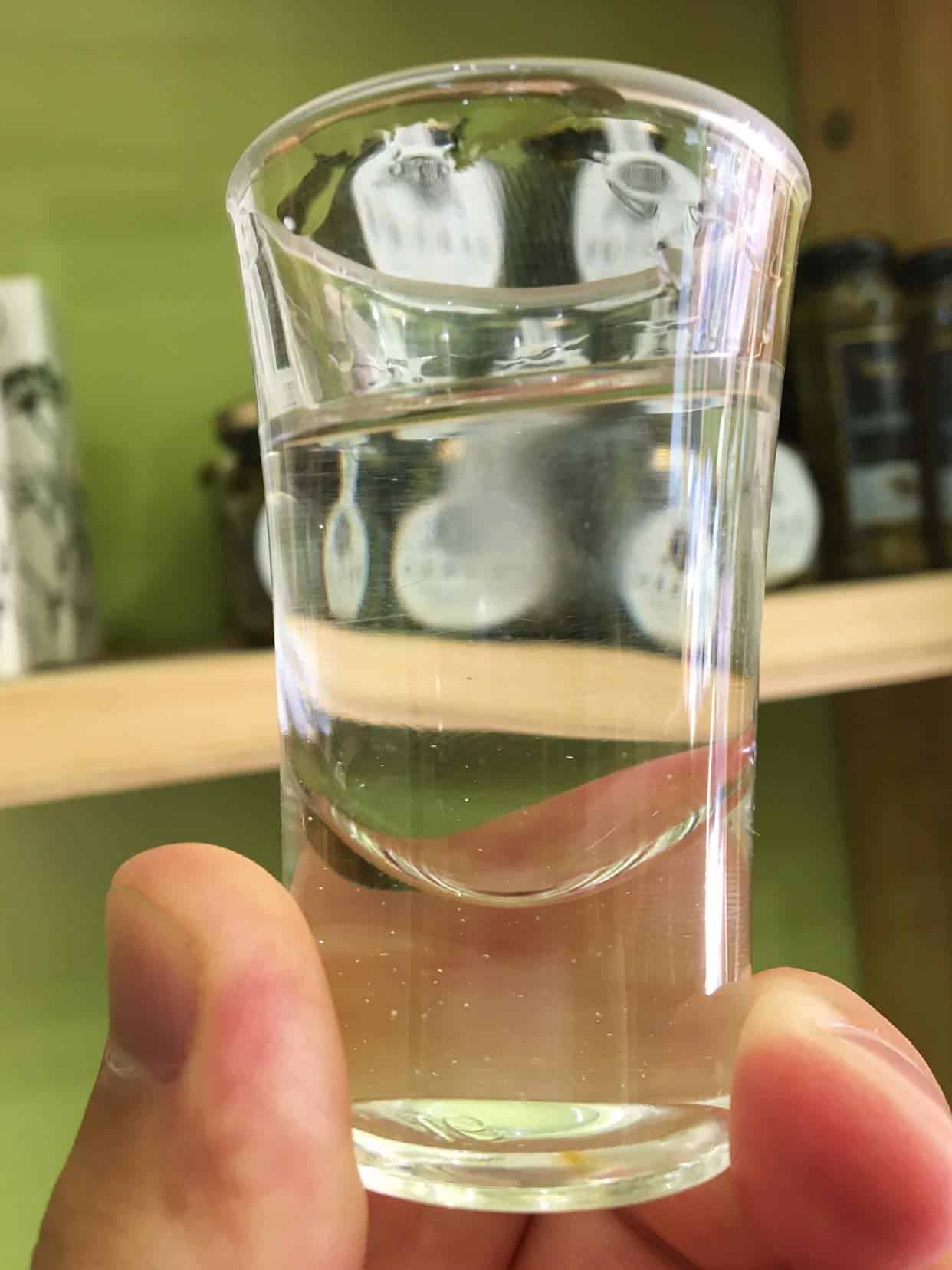 The owner then presented a charcuterie plate of smoked pork from Crete, an aged blend of sheep & goat milk cheese, caper leaves and Kalamata olives. 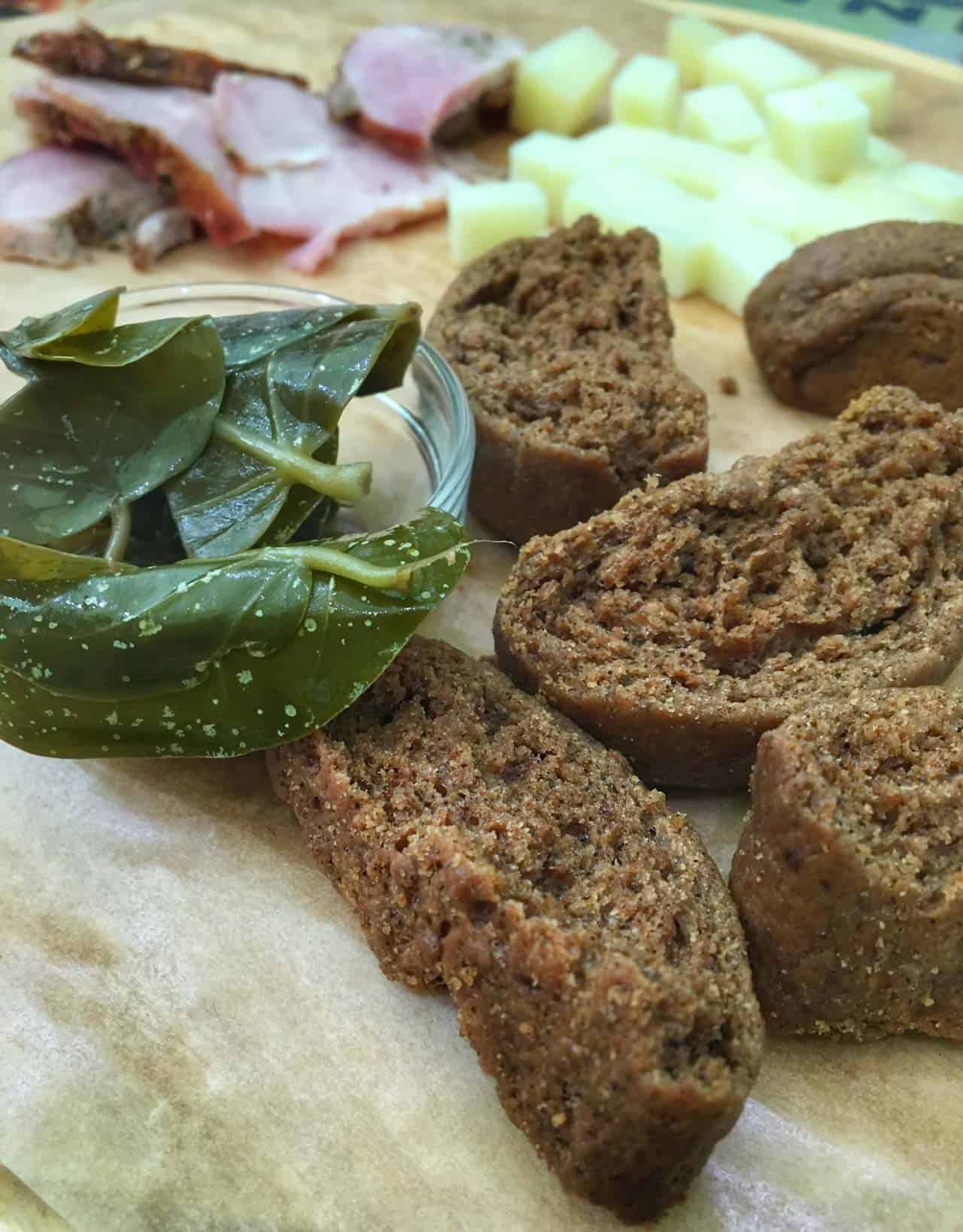 As we made our way through the plate, our shot glasses of liquor were refilled and we listened to explanations of the Greek diet and why it’s considered one of the healthiest in the world.

Much of this is attributed to Greeks’ olive oil consumption, which is apparently the highest of any country- approximately 17 liters (4.5 gallons) per person annually. That’s a lot of olive oil!

We happily sampled some of the oils from different regions of Greece and learned about differences in price, taste and quality.

We also tried some of the famous Kalamata olives, and I confirmed once again I don’t care for olives. 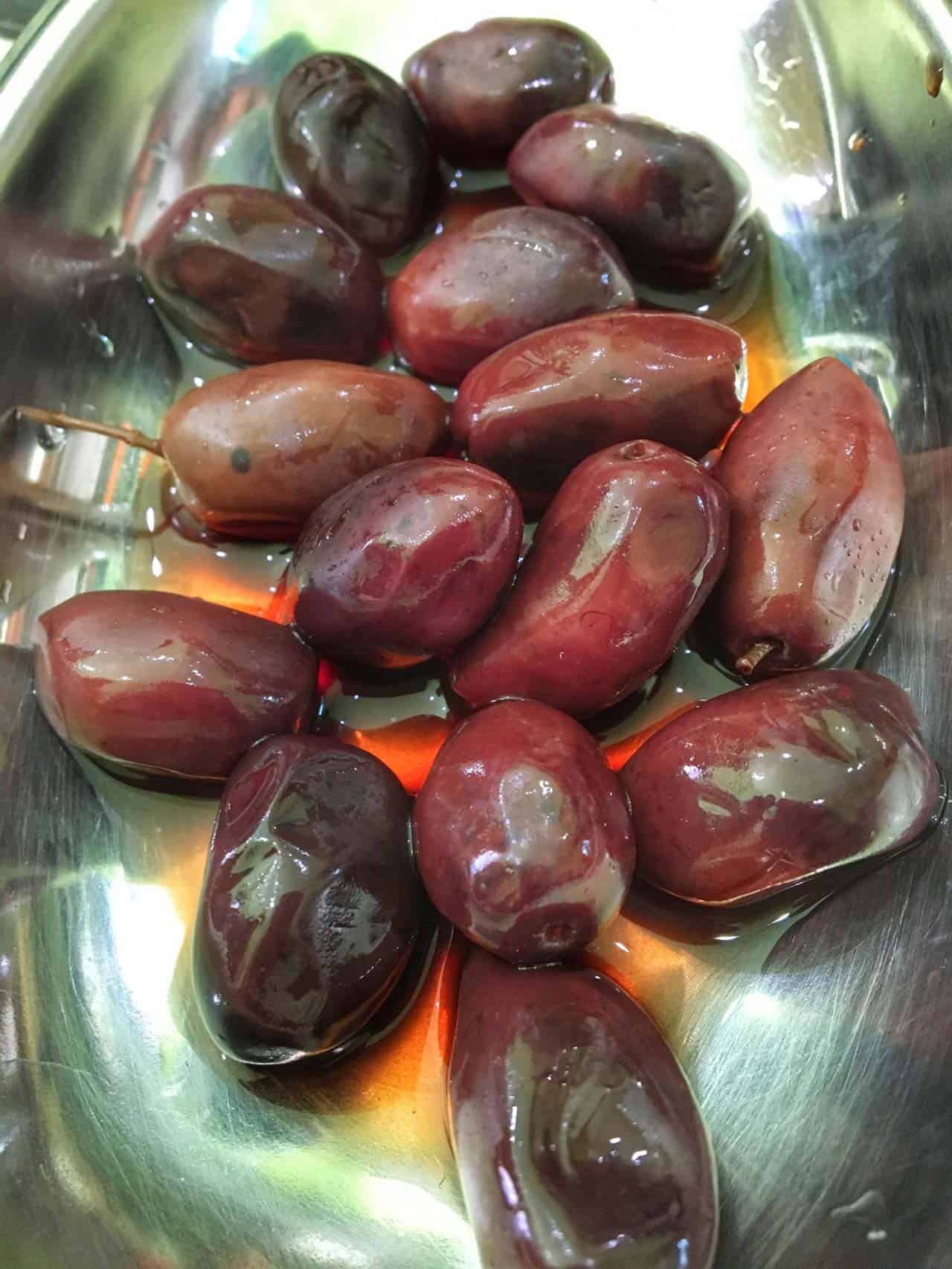 I’ve decided to continue trying olives on every walking tour that offers them because twice so far, once in Madrid and once in Istanbul, I found some I didn’t dislike. But alas, not in Greece.

Next we stopped for a famous Greek coffee. 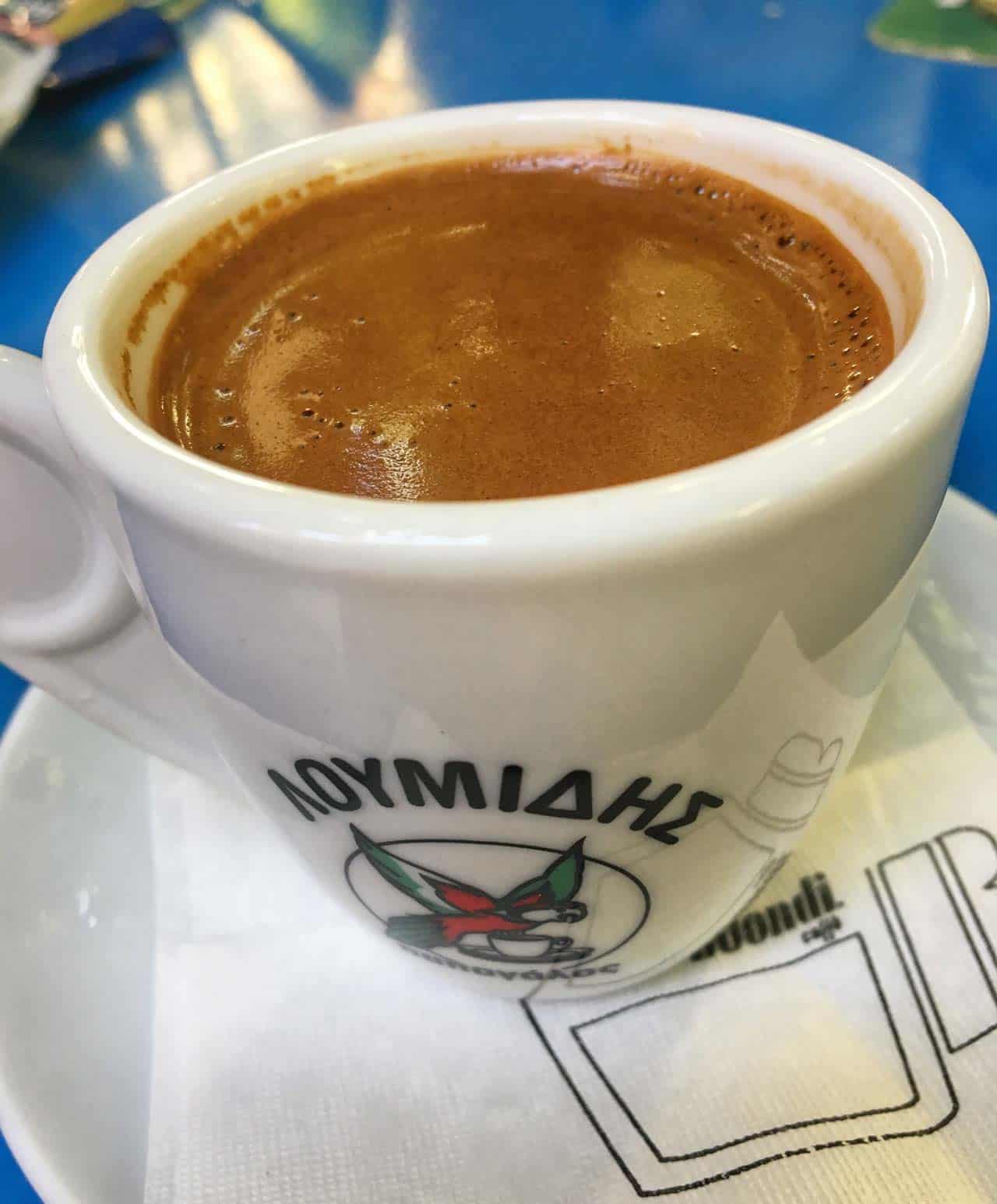 We discussed how Greeks have a huge coffee culture but not much of a tea culture at all. We also learned that the frappe was invented in Greece!

As we made our way to our next stop, we paused to take in an impressive view of the expansive city. Our guide explained why the city always seemed so busy- half of the country’s population of ten million people live in the capital of Athens! 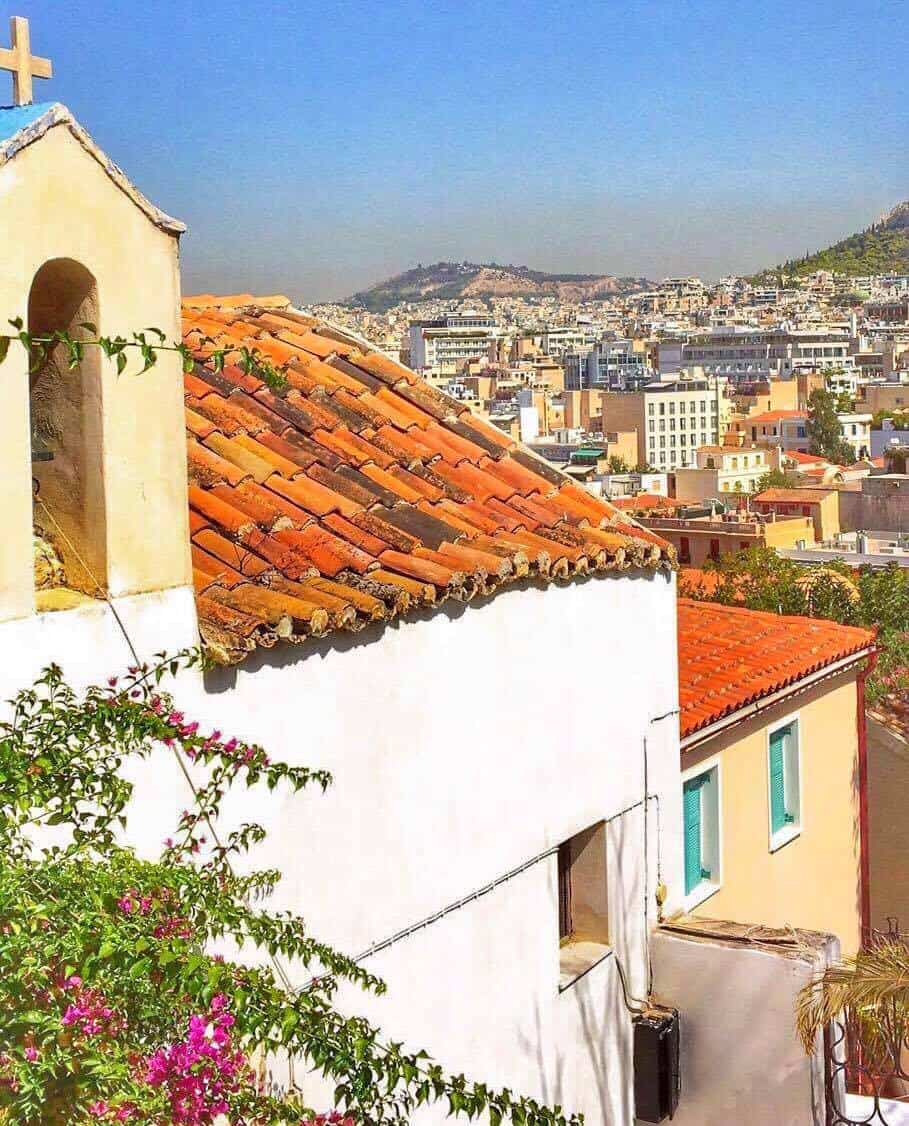 We also learned that no king or queen of Greece has ever been from Greece, a fact I found interesting.

Our next stop was for a “lite” lunch at a restaurant so famous for their Greek meatballs served with THE red sauce that even Jamie Oliver has dined there.

As promised, the meatballs were delicious. 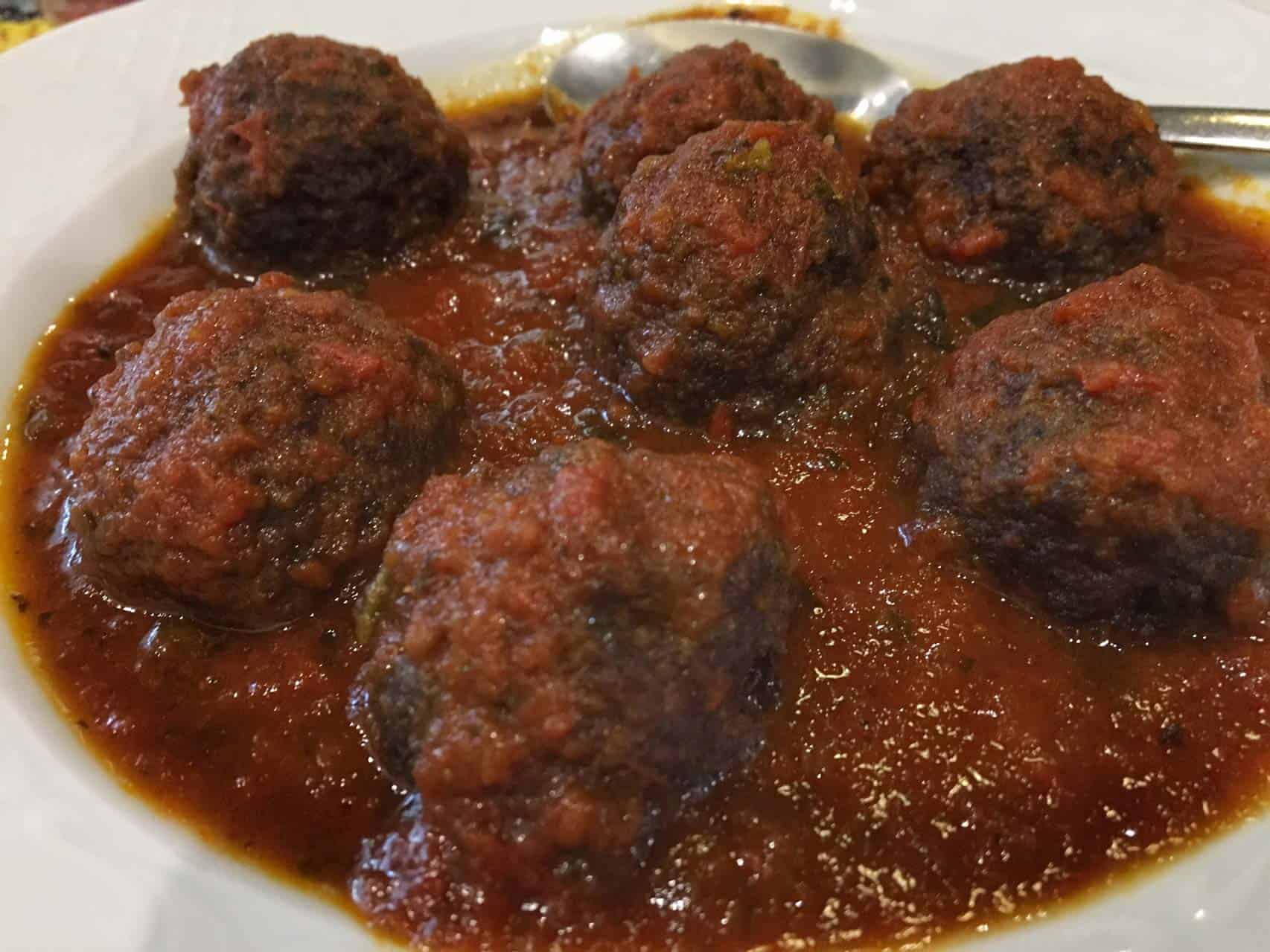 They were different from the meatballs I’m used to- these were fried and then served in one of the most delicious red sauces I’ve ever tasted, definitely worthy of the title ‘THE red sauce’.

Along with the meatballs, we were served a salad in an edible bread bowl that was simple yet perfect- juicy tomatoes, feta cheese, onions and capers were soaked into the crusty bread bowl, which you used to scoop up the salad before eating the bowl itself. 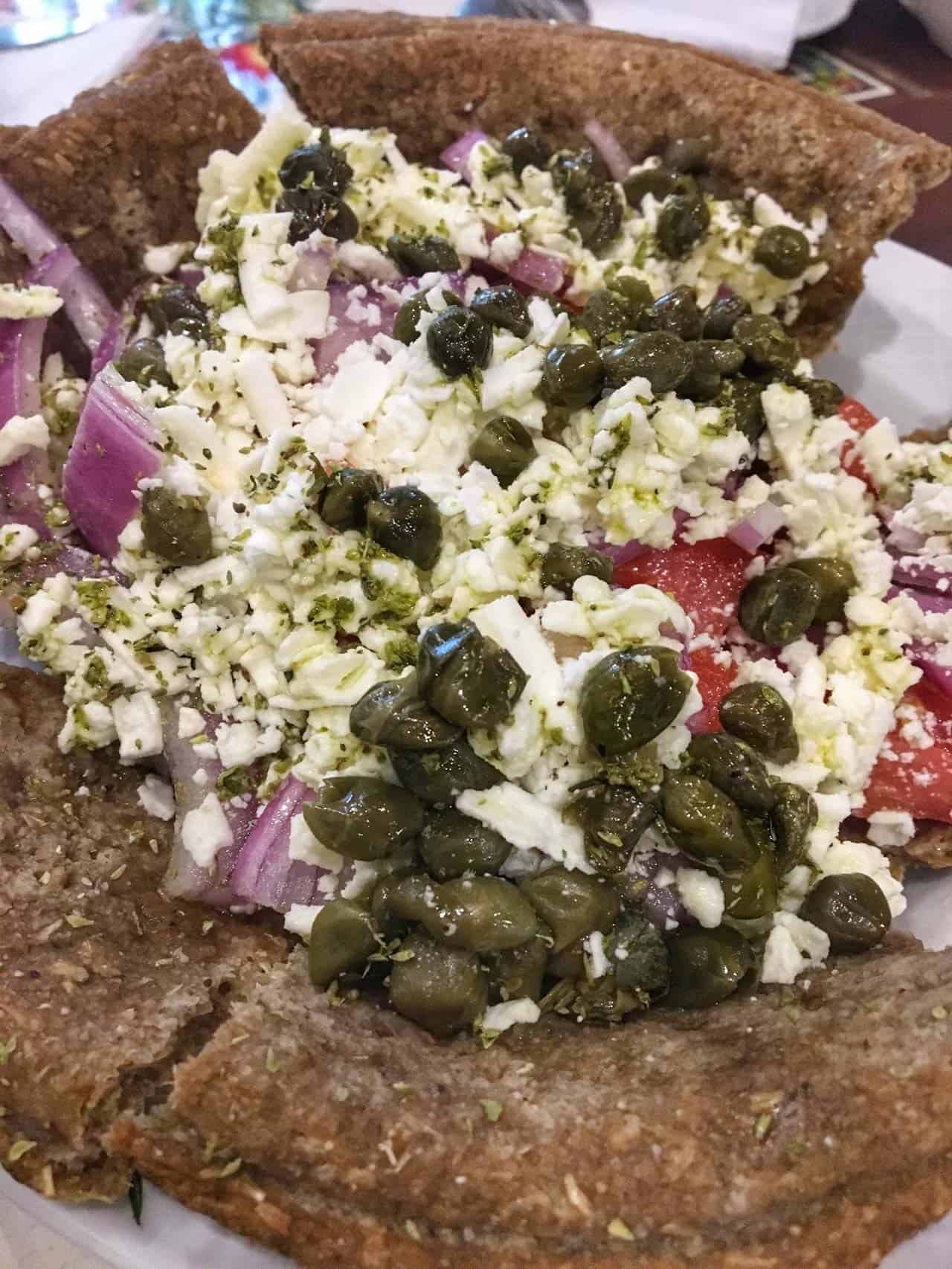 We also tried stuffed grapevine leaves that had been filled with seasoned rice, which we washed down with an interesting local rosé. 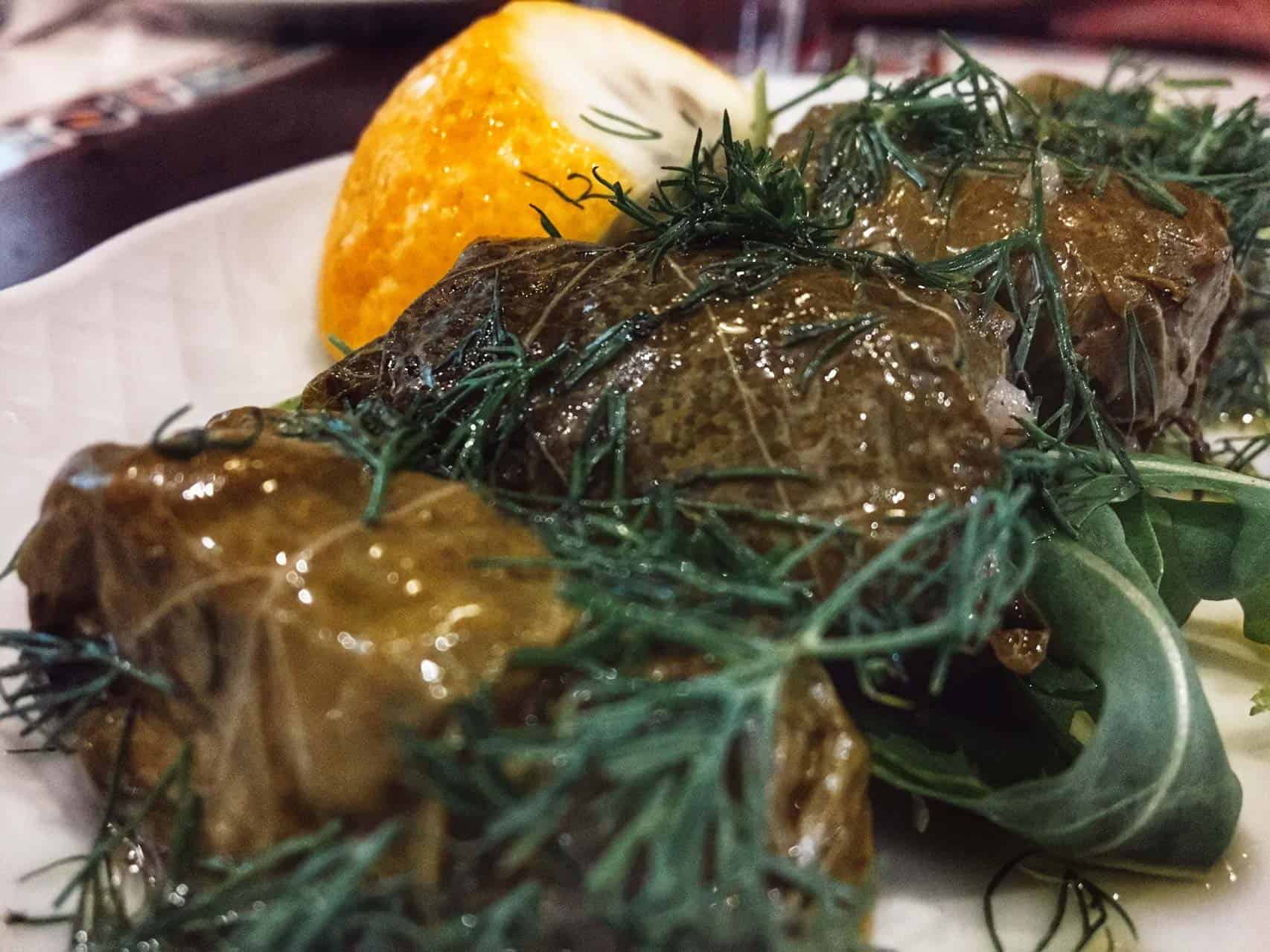 Next was a fried local cheese with honey, capers and a sweet red jam. 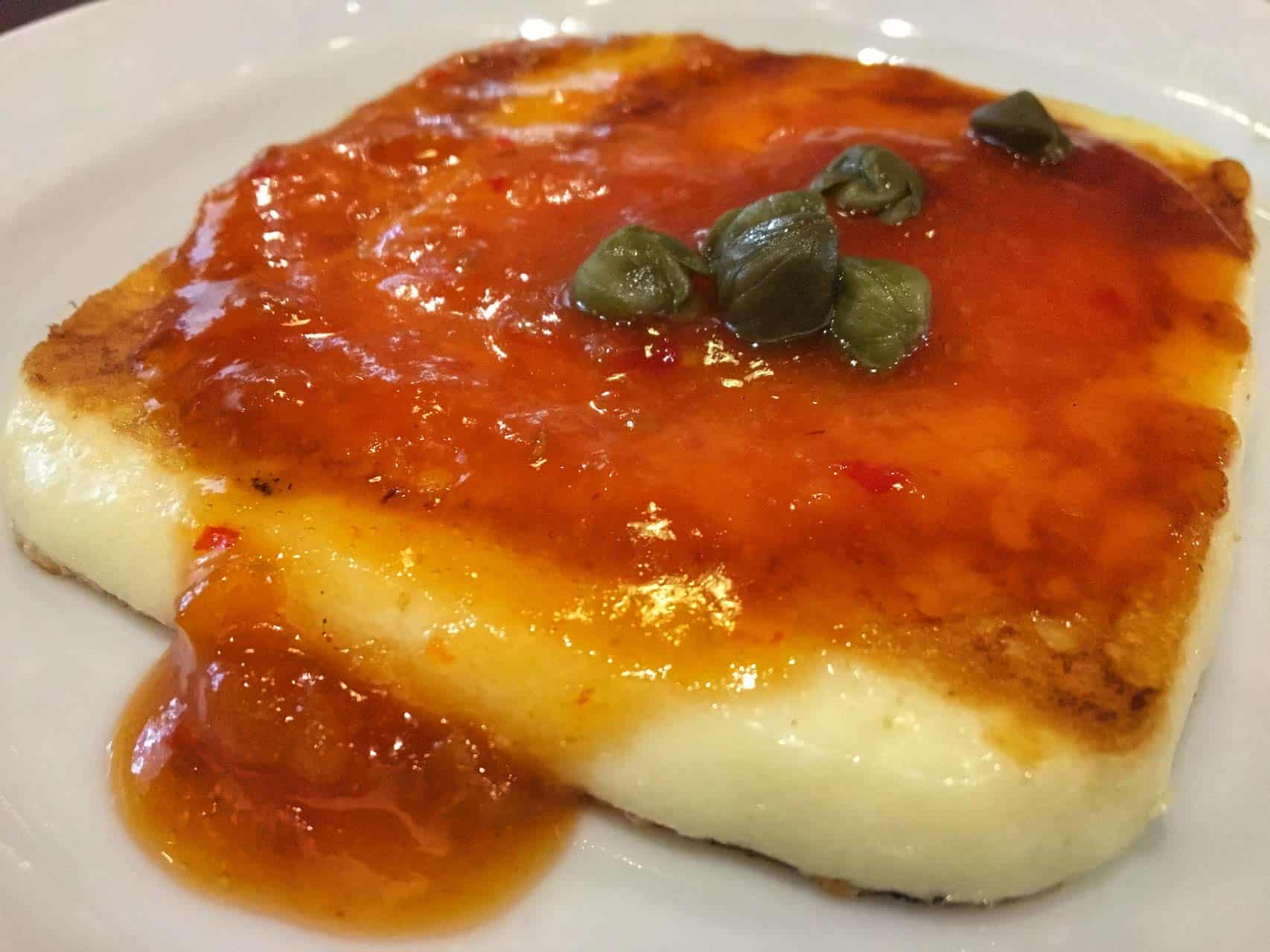 As we all sat around looking at the remaining few bites, the guide explained they were known as the bites of shame- the ones everyone wants but no one takes out of politeness.

Greek formality dictates that you  offer these bites to everyone else at the table and only take them for yourself when they refuse.

Sadly, the meatballs were all gone, as no one was shy about taking them, otherwise I would have gladly taken the bites of shame.

Nearly full, we made our way to the next stop, a souvlaki shop that is arguably the best in the city. 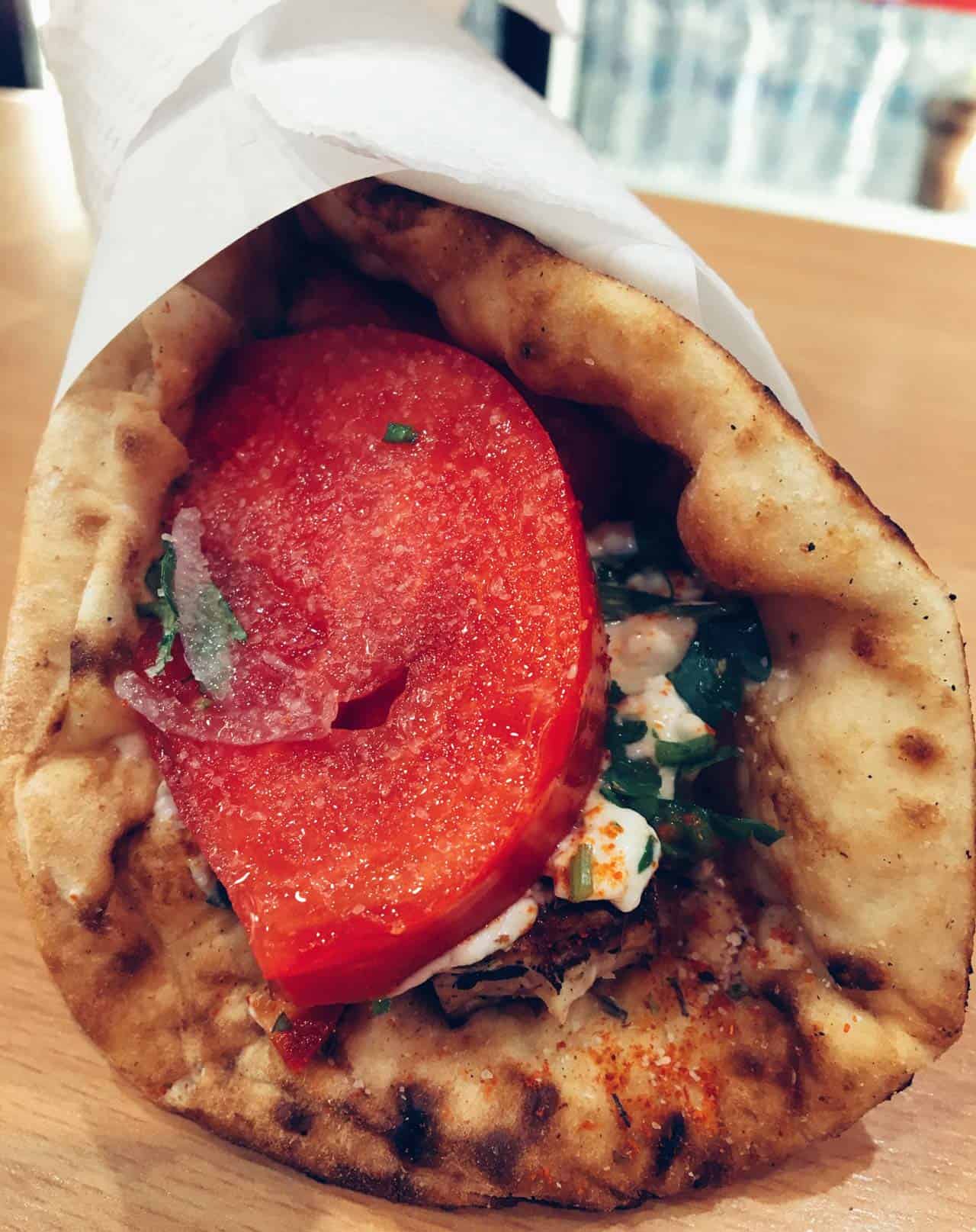 I say arguably because everyone has their opinion about which shop is the best. But, judging by the line out the door, many would agree on this shop.

Another great reason to book your tour with Culinary backstreets? Not only were we able to bypass the line, but our guide also reserved a pork version of our for dish that the restaurant had run out of for other customers. If you go on your own, not only will you wait in line, but there will be no guarantee the crowded shop will still have what you want.

One last stop, the guide announced, and it was the biggest yet. We were all full enough to go home for a nap, but still excited to learn that we would be dining at a homestyle seafood restaurant.

Plate after plate of delicious, homestyle food arrived at our table. 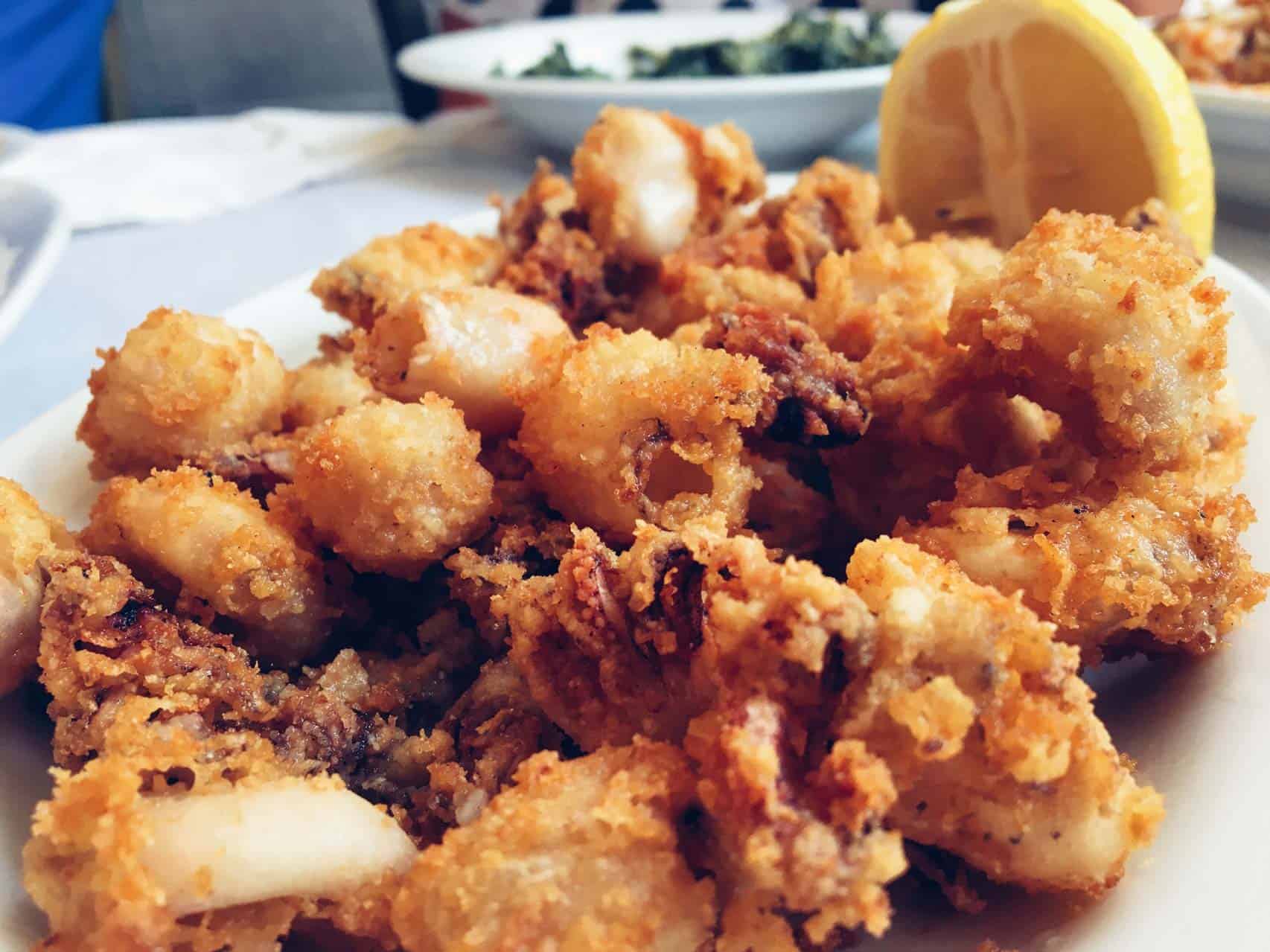 and the roasted peppers stuffed with a flavorful rice. 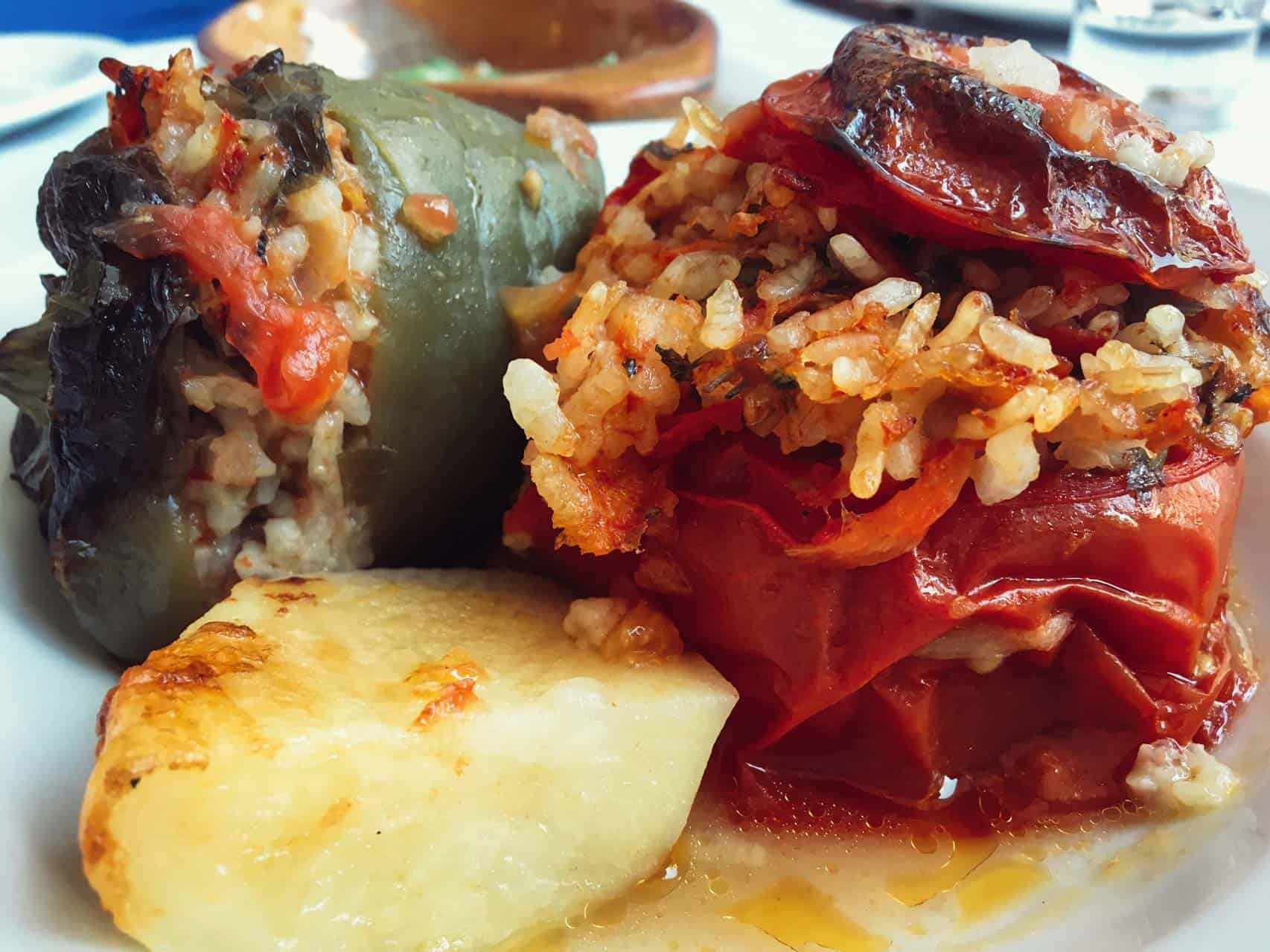 We also tried the crispy whole fried sardines that you eat bones and all! 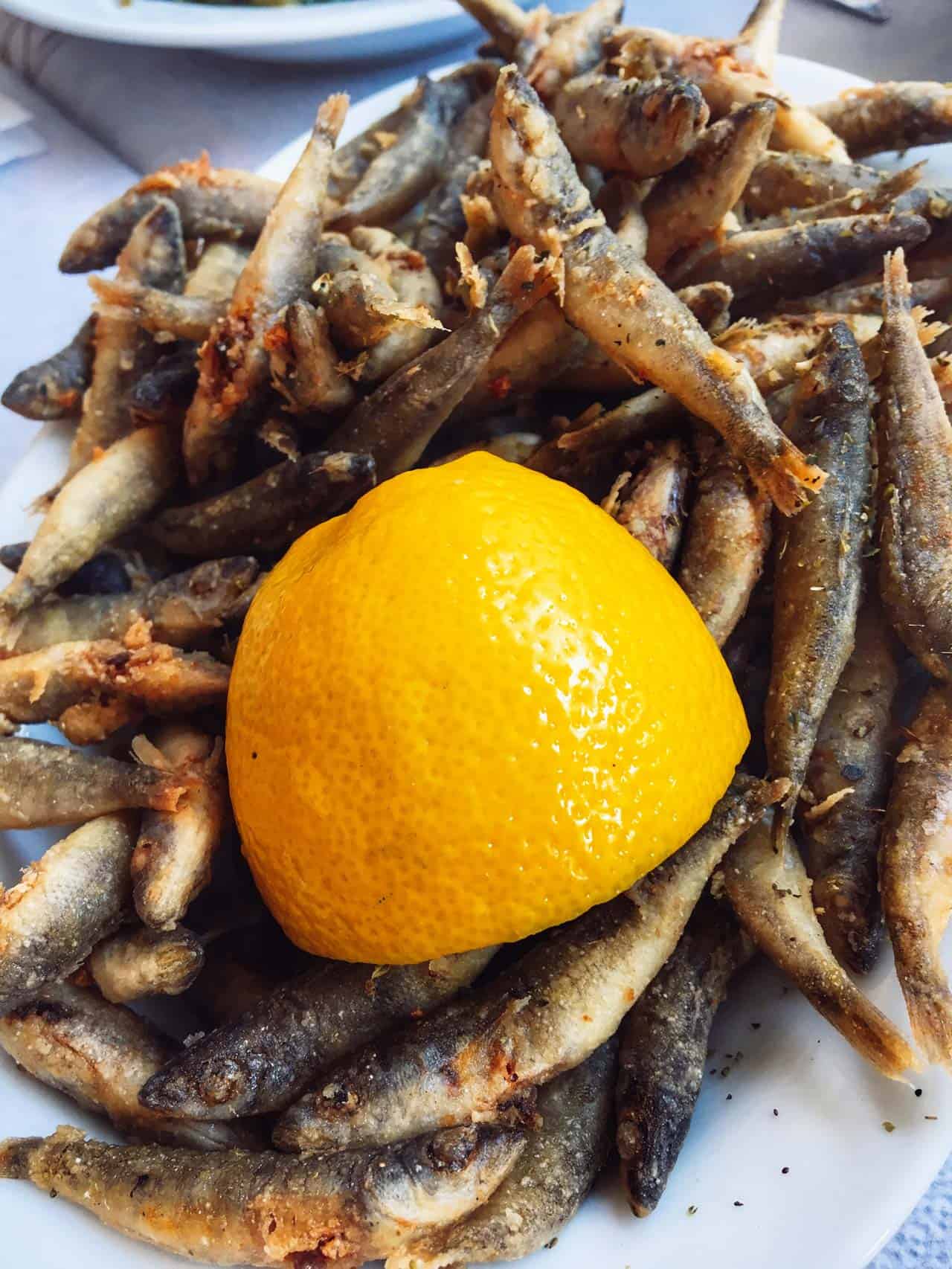 I liked these, but prefer grilled sardines, like the ones I tried for the first time in Ljubljana.

This time, there were plenty of leftovers but no bites of shame to be had, we were all stuffed!

“Would anyone like dessert?”, the guide asked. “Not today,” we all told him. I wonder how many do actually order dessert.

Which dish looked best to you? Would you consider taking a walking food tour of Athens? Let me know in the comments section below!

Practical Information: To book this tour for yourself visit their website by clicking here.

Disclaimer: I would like to thank Culinary Backstreets for having me as their guest on this tour. All opinions remain my own, as usual. 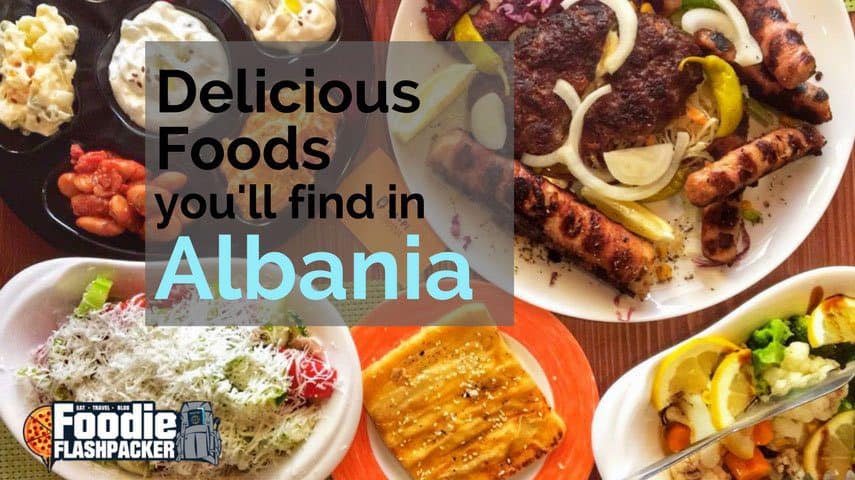 What is Albanian Food? | 11 Must Try Albanian Dishes- The Best in Albanian Cuisine!
← Read Last Post 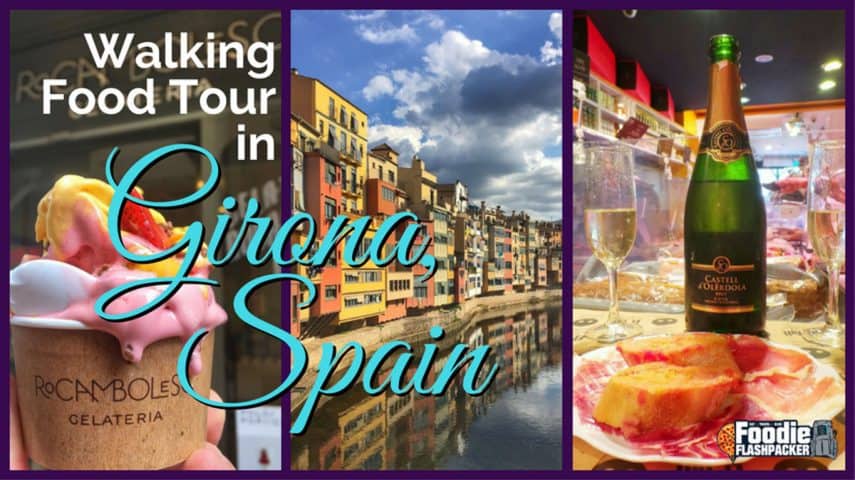 Where to Eat in Athens, Greece: The Best Athens Restaurants

[…] was one of my favorite stops on my walking food tour of Athens. We sampled several small dishes, and the food was so good I knew I had to […]

Great post! When visiting a new city I also love to find a walking food tour. I like the spanakopita, or Greek spinach pastry instead of koulouri.

I haven't yet been to Greece! I know!

We were looking for flights during the summer but the prices were ridiculous, so we opted to go to France. By train. Instead!

I absolutely love everything on the list except for the olives (yuk), the coffee, and the meal with nuts - Koliva! I'm a great supporter of food tours and would certainly do so in Athens.

I'm the same way about olives- they're just not for me, no matter how many I try! I've found some I don't hate but none that I was crazy about. Have you been to Athens before? It really is an interesting city!

I love the idea of tasting local cuisine and participation in walking tours. Thanks for the tip to skip breakfast!

You're welcome! I hope you get to take the tour soon. If you do, please let me know what you think of it! I think you'll really enjoy it.