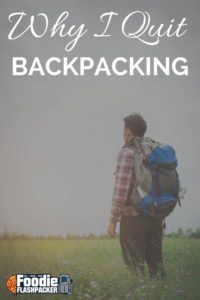 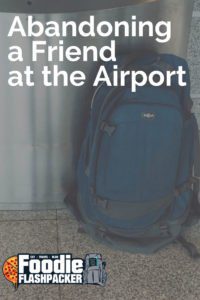 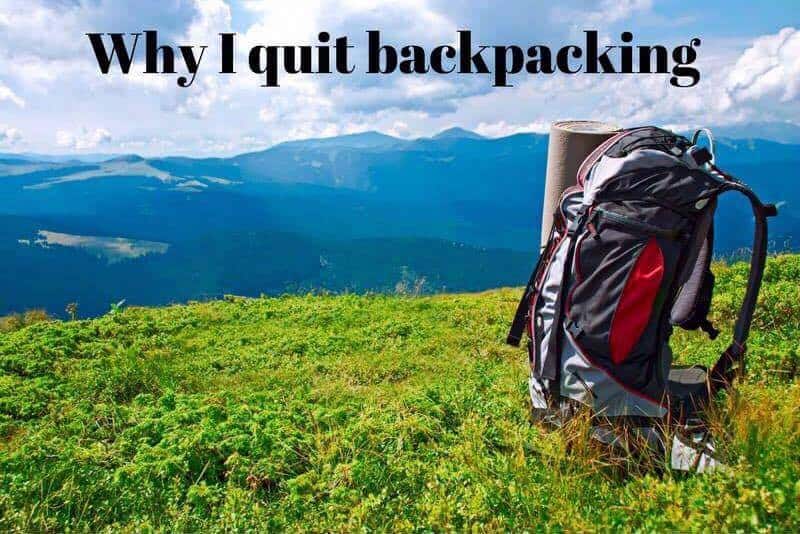 I cast one last guilty look as I walked off and left you there. It was awful leaving you the way I did. It paid no respect to our history—nearly forty countries in less than four years since we first began traveling together. But I had to move on. And as much as I want to say it was just a matter of practicality it had actually been a long time coming. I had outgrown you, both literally and metaphorically.

When I arrived at the airport in Porto, Portugal to start the journey to Iceland I knew my suitcase was over the limit. It was the heaviest it had ever been. I looked up the airlines baggage allowance online- 20 kilograms it said. But, being American, I don’t have a grasp of kilos. I asked a local friend how much he thought it weighed. Closer to thirty kg’s, he estimated.

I immediately started thinking of a solution. Option number one was to ship the things I wouldn’t need to my next destination. I gave this option serious thought but it just didn’t make sense. Most of the things I would be shipping were cheap H&M clothes. Why spend $80 to ship $50 worth of clothes? It would be easier and cheaper to replace the clothes later.

Option number two was to trim the fat- getting rid of anything I really didn’t need to get the bag within weight allowances.

The only item that gave me pause was my backpack. The large, 50-liter backpack I had started my trip with nearly two and a half years ago. I had honestly begun separating myself from it months ago. When I started the blog and began working with hotel brands I felt it looked unprofessional to show up with a backpack. So I bought a more traditional suitcase. But, due to sentimental reasons, I still carried the backpack. Only now I carried it inside my new, fancy rolling suitcase.

I decided to hope for best and pack it, thinking maybe the suitcase wasn’t as heavy as we thought. Just to be sure, I packed all items deemed non-essential in the backpack and tucked it away into the suitcase.

The Moment of Truth

As I entered the airport and stepped up to the counter to check in I placed the suitcase on the scale, smiling politely. The hope being if it was slightly over the attendant would forgive me if I was friendly. “Sir, your bag is over the allowed weight”, she informed me. I did my best to play shocked. “By how much?” I asked. When she told me 5 kilos I had no idea how much that was. A little, a lot- who knows? I don’t speak metric.

I reluctantly removed the backpack full of items and placed the case back on the scale. “How much now?” I asked. “Twenty kilos- perfect!” she said.

Just to be sure I was making the right decision I asked what it would cost for the overage. At thirteen euro a kilo I was looking at sixty-five euro for this flight alone. Also, I had two more upcoming flights on other budget airlines to think about. Quick math put that at nearly 200 euro—more than four times what I initially paid for the backpack.

Was I willing to pay 200 euro for a sentimental attachment?

Apparently, since I left the bag on the floor next to a trashcan in a busy airport the answer is no. 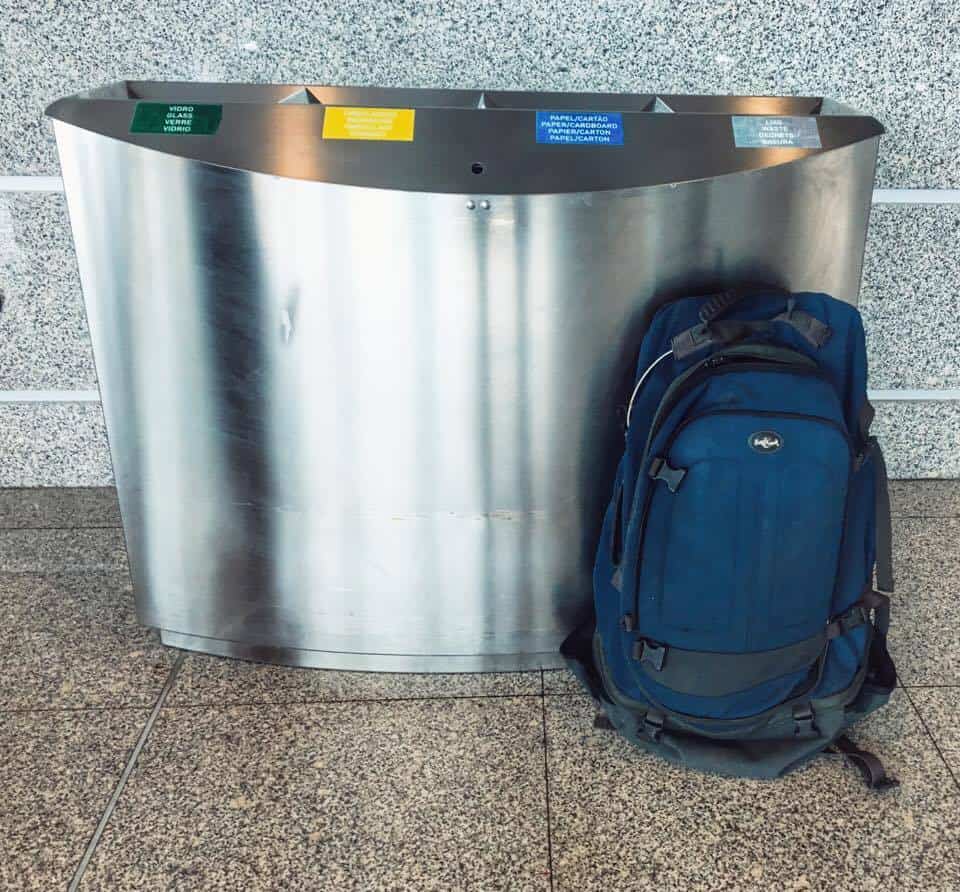 Let’s hope that the abandoned bag didn’t cause any security issues with airport police. Several people pointed that out to me after I told them about leaving it the way I did.

I do have regrets though. Had I had more time I would have found some young broke backpacker and donated it to them. Carried on the legacy, in a way.

Hopefully some employee takes it upon him or herself to save the well-worn pack and pass it on to someone deserving.

For now, I’m off to put some miles on the replacement. I suppose it’s more of an upgrade than a replacement, I’m afraid. This one has wheels! And a handle! And instead of carrying everything I own on my back I’ll now drag my worldly possessions behind me.

I really need to streamline– the five kilos I left on the airport floor was just the start. I see all these travelers on long term trips with only a carryon bag. I’m actually carrying more now two and a half years into the trip than I was when I started with just the backpack. It’s really actually kind of ridiculous. You would think after traveling for this long I would have figured out how to get by with the bare essentials. I probably don’t need all of this: 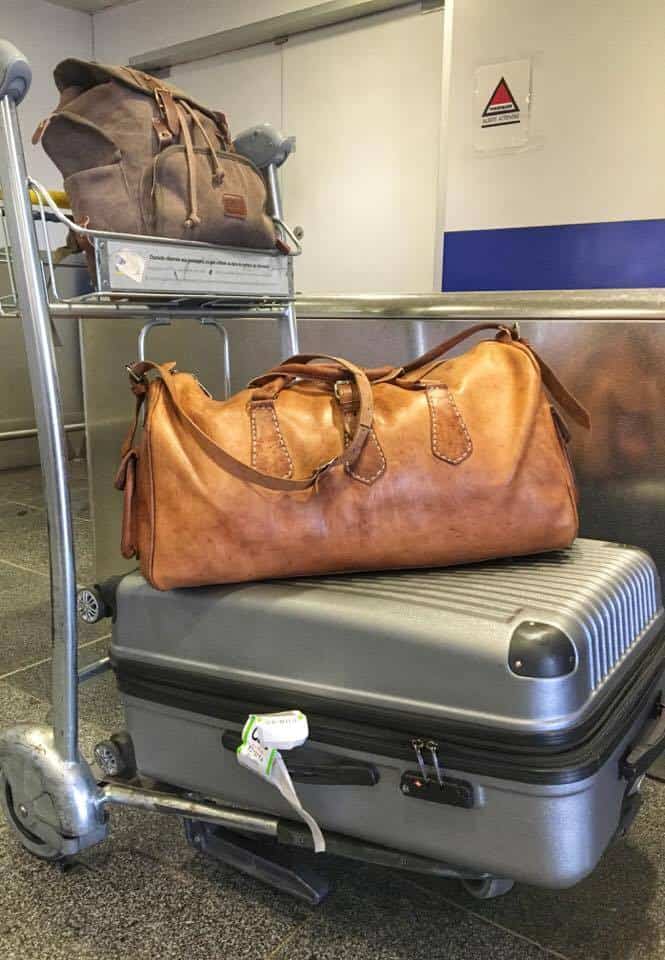 We’ll see how long the fancy rolling suitcase lasts. I’m sure at some point a wheel will fall off and I’ll curse the thing, missing my old trusty pack. But until then, I’ll be on the lookout for a stranger carrying my old travel friend, making their own memories.

However, I understand you completely. I have a trusty backpack that I've had for 11 years. I've now reluctlantly, "lent" it to my 14 year old son (let's see how long it lasts now..) as in the last two years I've been going to luxury, more superior abodes, and you're right, hotel staff are polite and unassuming, but I'm sure it hurts them to see people rocking up in rags and a tatty old bag!

p.s. 'Love the leather holdall. The leather "laptop" bag I I have belongs to my husband. I bought it for him as a weekend bag and just never let him use it....!

Thank you! I've gotten more comments on that leather bag than anything else! I should open an export business selling those and I could get rich!

Your new luggage is far more stylist...I have the same thing with turning up with a backpack and have had the same thoughts as you...but I cant bring myself to part from it! I love my backpack!

Ahh... that travel friend. ;) Well, you did what you had to do. My solution to packing: reversible clothing. The only time I went over the limit was when I moved from the US to Europe. Cheaper than shipping, if you can believe it.

That was a sad story. Well you had no choice but to say goodbye rather than bear the pain in your wallet. Hope that it was picked by the right person

The plight of every traveller, managing your personal belongings within the flight luggage limit!!! Although I try to keep it within the limits while packing for my travels, it isnt the same scene while I fly back home, That is when my backpack comes to the rescue :).