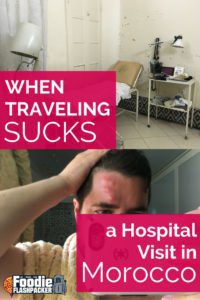 Waking up, I stumbled into my usual routine. Groggily I made my way to the restroom, then to wash my hands. Looked up into the mirror and this morning was different. This is what was staring back at me: 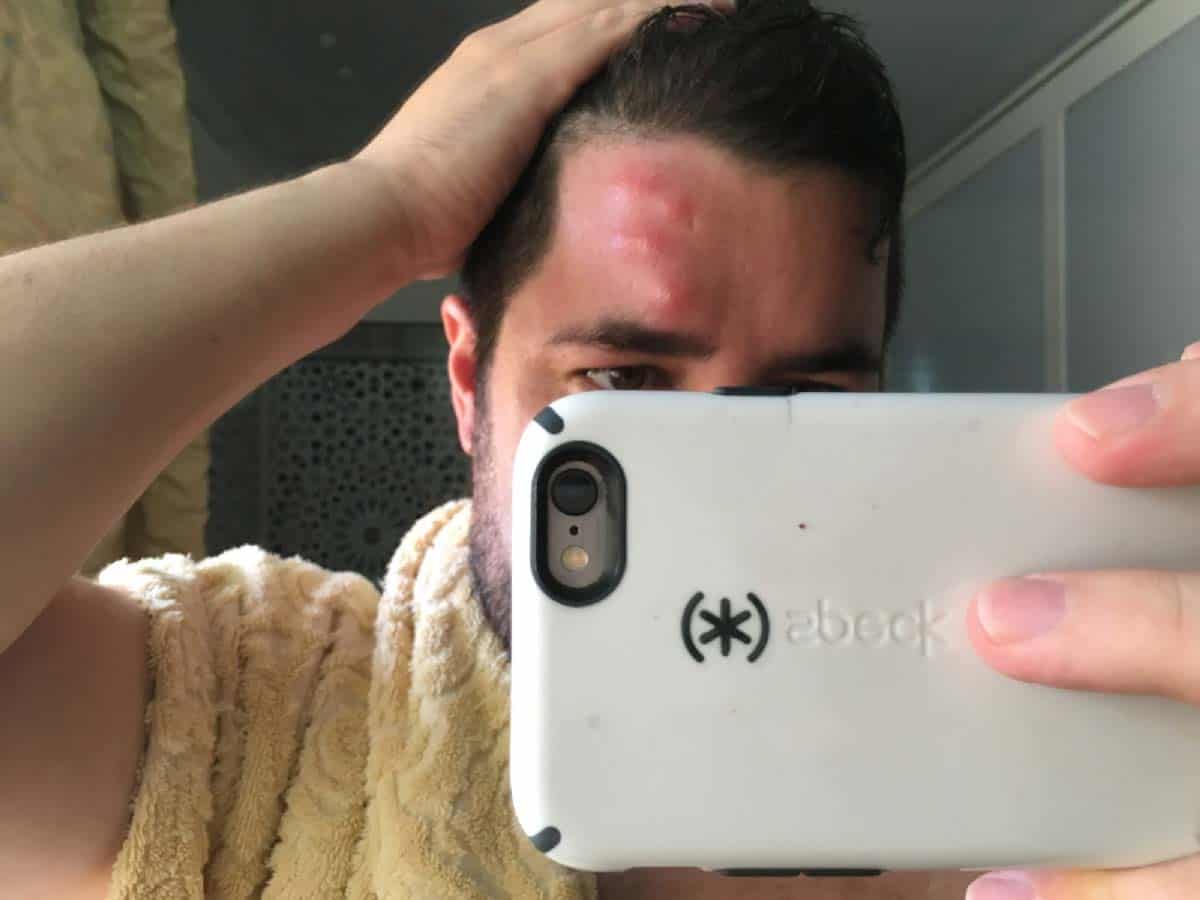 The night before I was vaguely aware I was getting bit by something, probably mosquitoes. I had a few itchy spots. But I was hanging out on a rooftop overlooking the medina of Fez drinking overly sweet mint tea with new friends. I couldn’t really be bothered.

I’m a magnet for mosquitos anyway, it’s nothing new. If there are mosquitos around they will always find me, usually bypassing whoever I’m with. But these were different. Bigger. The bites came to mountain like peaks that were scabbing over. I won’t go into too many details but it was obvious these weren’t normal bites. I was considering Googling face transplant procedures.

Finding a doctor in Fez:

I showed the woman running my guest house what had happened and she told me to find a pharmacy. The pharmacist took one look at me and said “No, no, no. Doctor better.” He tried to explain where to find the doctor in town but I’m useless with directions. Fortunately for me there were three people standing nearby that could show me. For a small tip of course. I tried to explain I didn’t need three escorts and that only one would do. They didn’t seem to understand this. So, I made my way through the winding medina of Fez with my small entourage in tow.

My escorts safely delivered me to a doctor just outside the medina and collected their tips. The nurse took one look at me at sent me to an examination room, no paperwork required. I was the only patient in the office so the doctor was with me within three minutes. 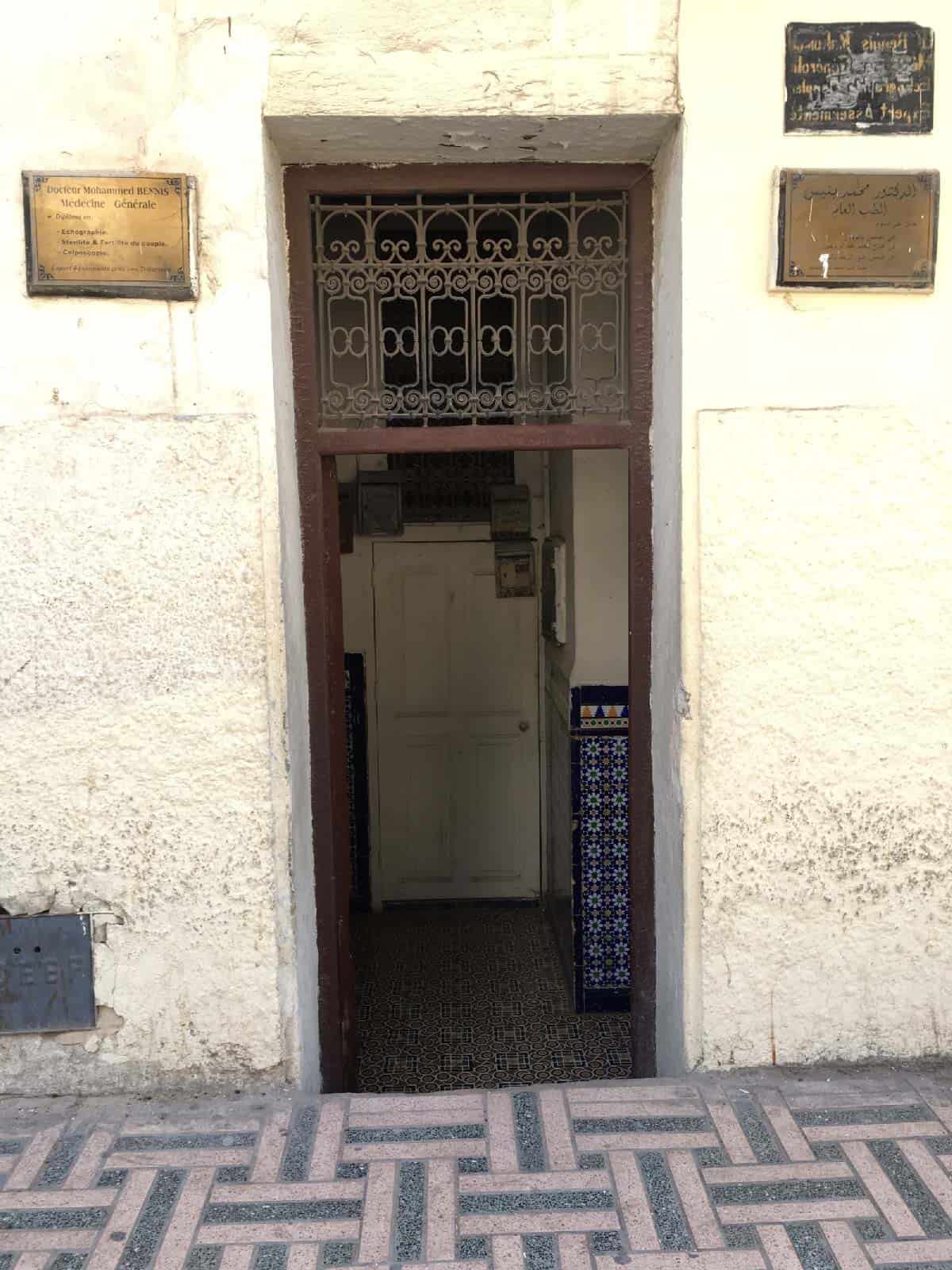 Everything in the examination room felt antiquated. Like, older than I can really express. Hopefully these pictures do it some justice: 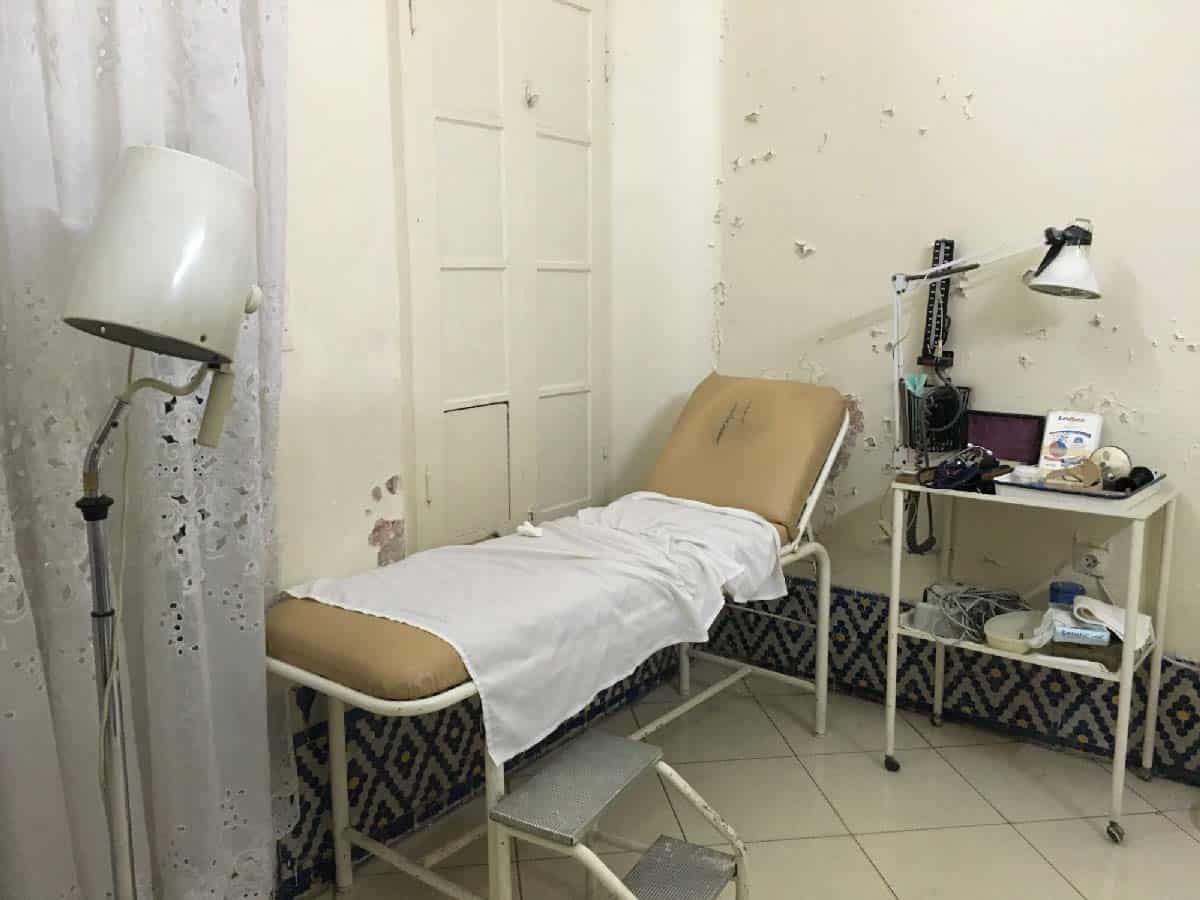 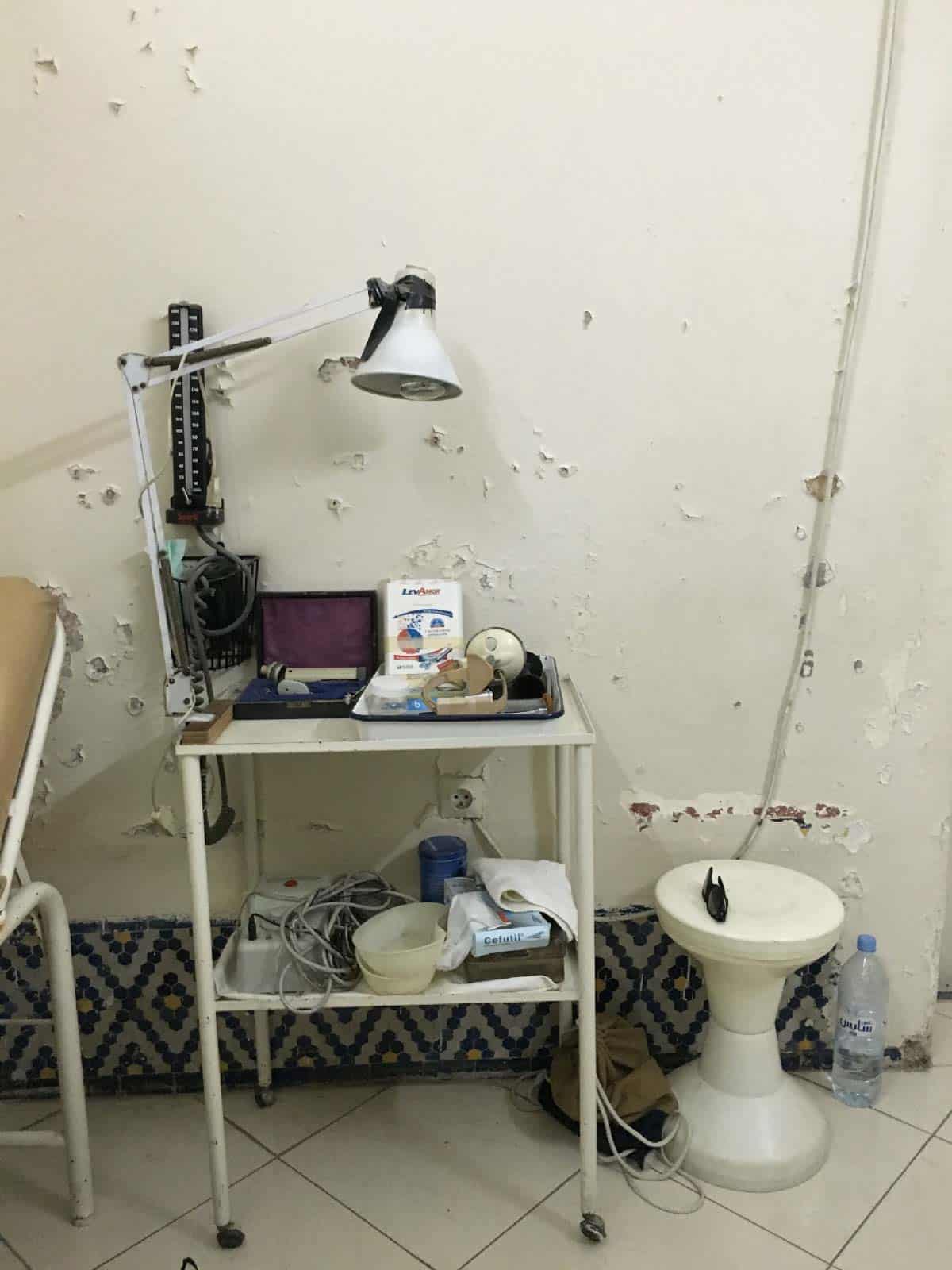 After a quick but professional examination of my blood pressure and breathing I think I was sent for x-rays. I’m still not sure if that’s exactly what happened. I’m even more unsure as to why bug bites would require x-rays but he sent me to stand behind what I’m assuming is the first x-ray machine ever built. He then turned out the lights in the room, flicked a switch, coughed, and turned the lights back on. Next then invited me to redress and join him in his office. 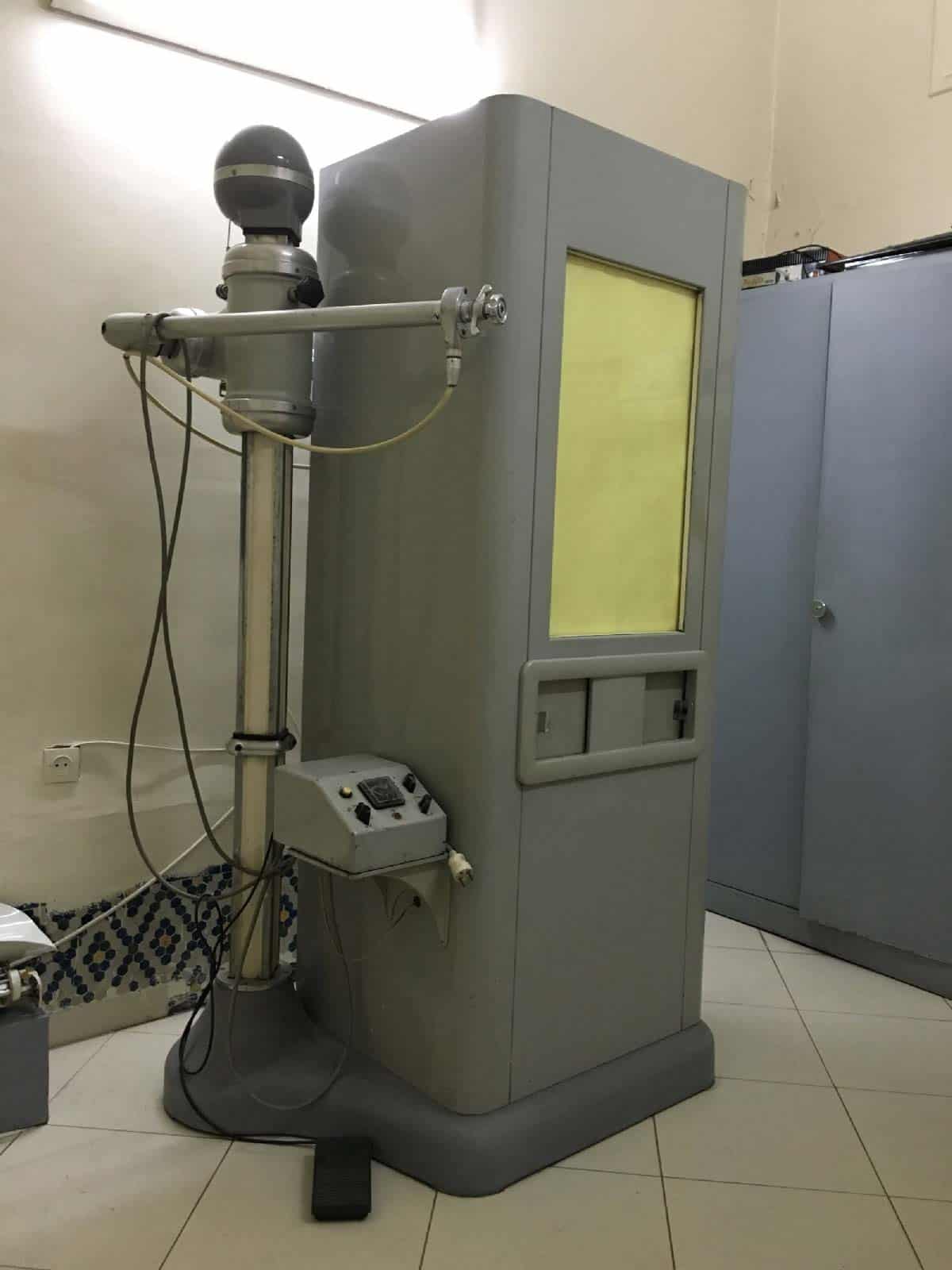 A few minutes later he presented me with a prescription for three different medications and sent me on my way. The nurse stopped me and collected the fee for the office visit- 150 dirham/$15.40 USD. I made my way back to the same pharmacist and collected the prescriptions. Three prescriptions set me back 113 dirham/$11.60 USD. Total cost to be attacked by zombie roaches from outer space: $27 USD, or about the same price as just my copay to see a doctor in the states. 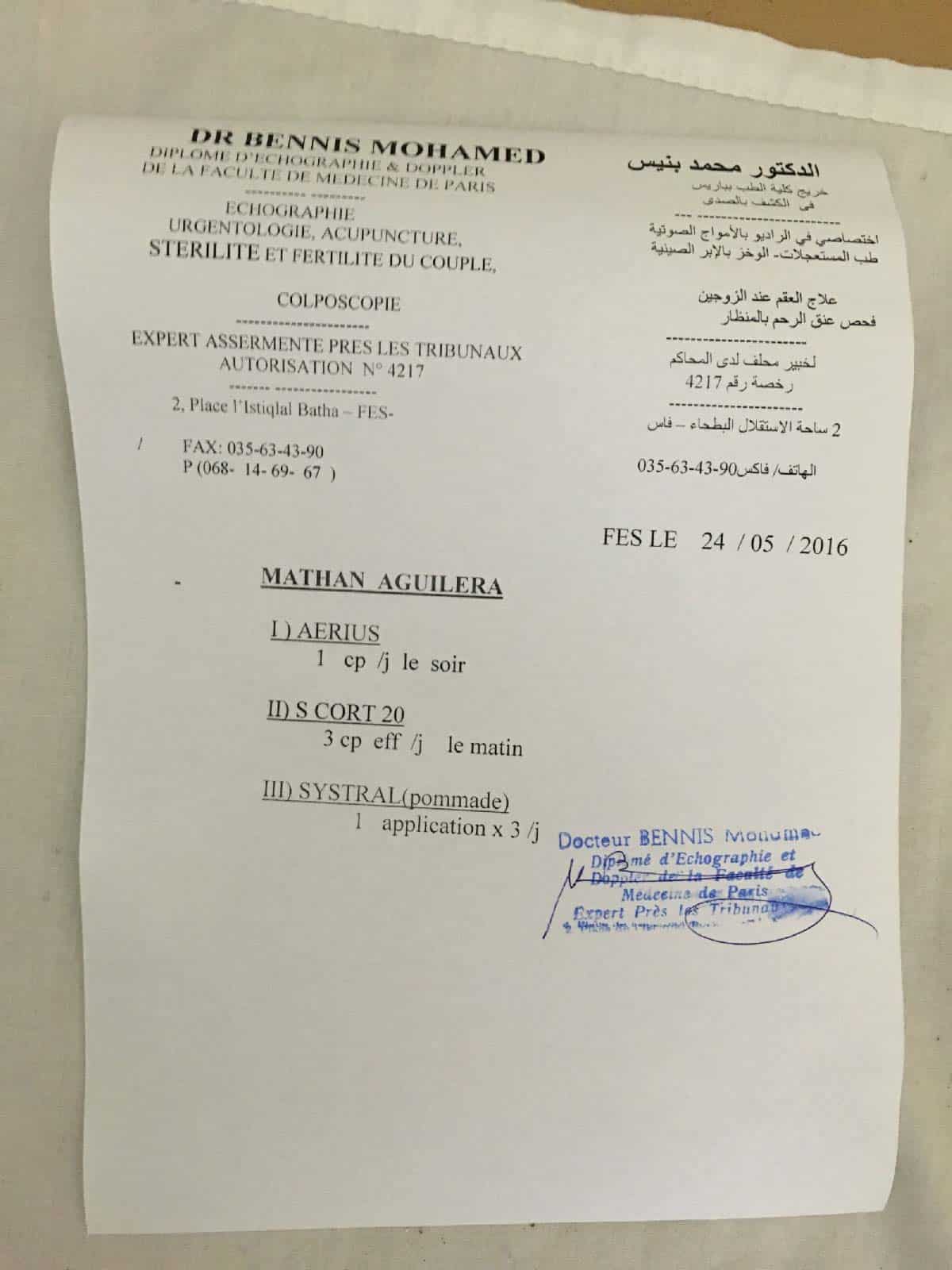 The doctor had done his best to explain the medication instructions to me in English but I wanted to clarify. I sent a photo of the prescription to a French speaking friend and he outlined the process for me. “So you went to a vagina, fertility, and ultrasound specialist for bug bites?” he asked. Apparently so.

Fortunately the medicine seemed to work quickly. By the next day I looked like this: 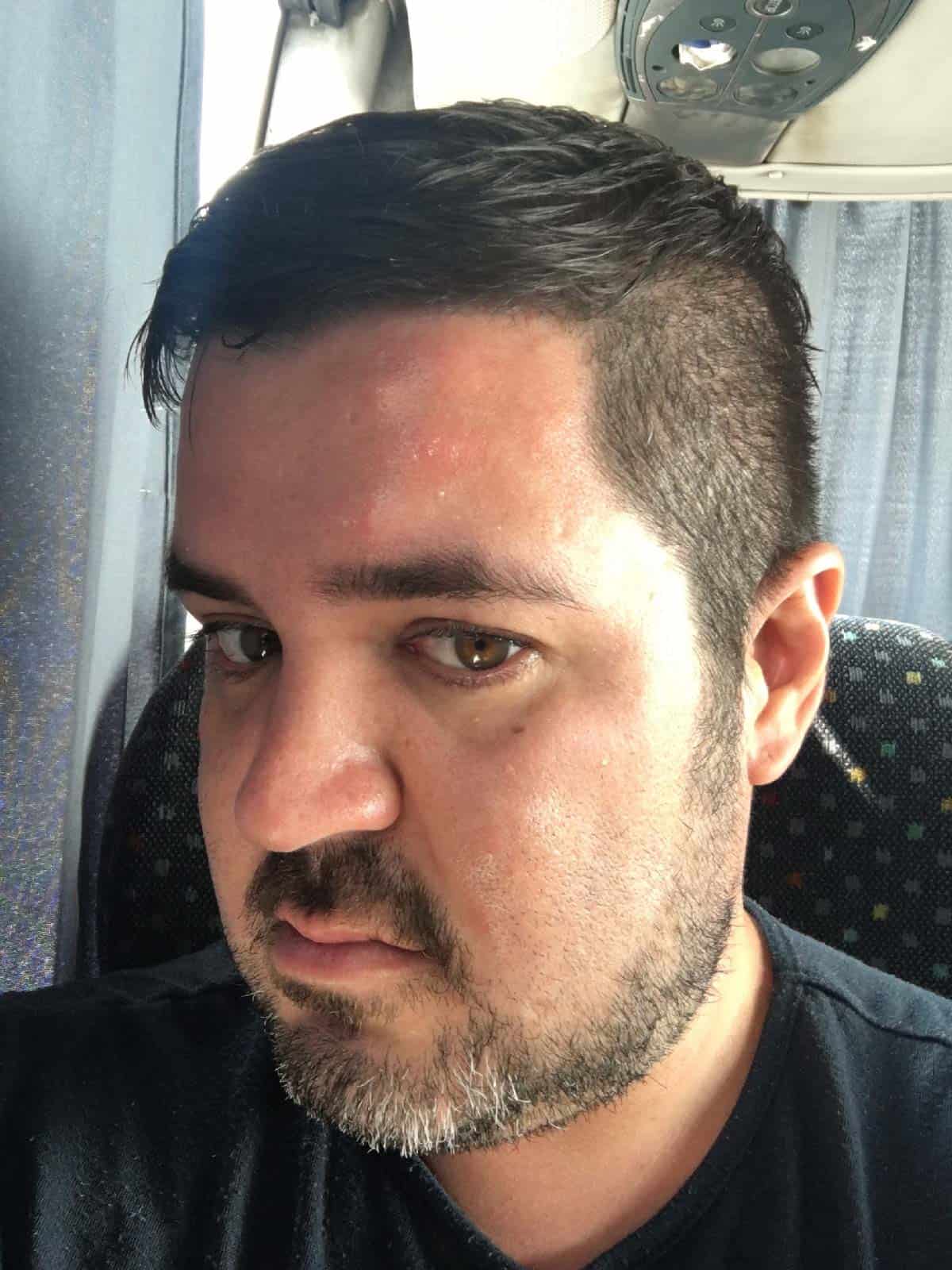 If it looks remarkably like I was wearing the same shirt two days in a row just please remember I was sick. Recovering from an direct attack to the face and on many medications. I couldn’t be worried about fashion.

In the end the magic lady parts doctor was able to put me back together again. It’s the first time in more than two years of traveling that I’ve had to visit the doctors office. Fortunately it wasn’t for something more serious. The doctor was professional and thorough and his prescriptions are working quickly and effectively. It seems I’ll live to see another day, albeit more wary of the bugs here in Morocco.

If you find yourself in need of a doctor in Fez I would recommend this particular doctor. He spoke enough English to communicate his points and even though he may specialize in female issues he also apparently runs a general practice. The manager of my guesthouse told me his charges were typical. A copy of his business card: 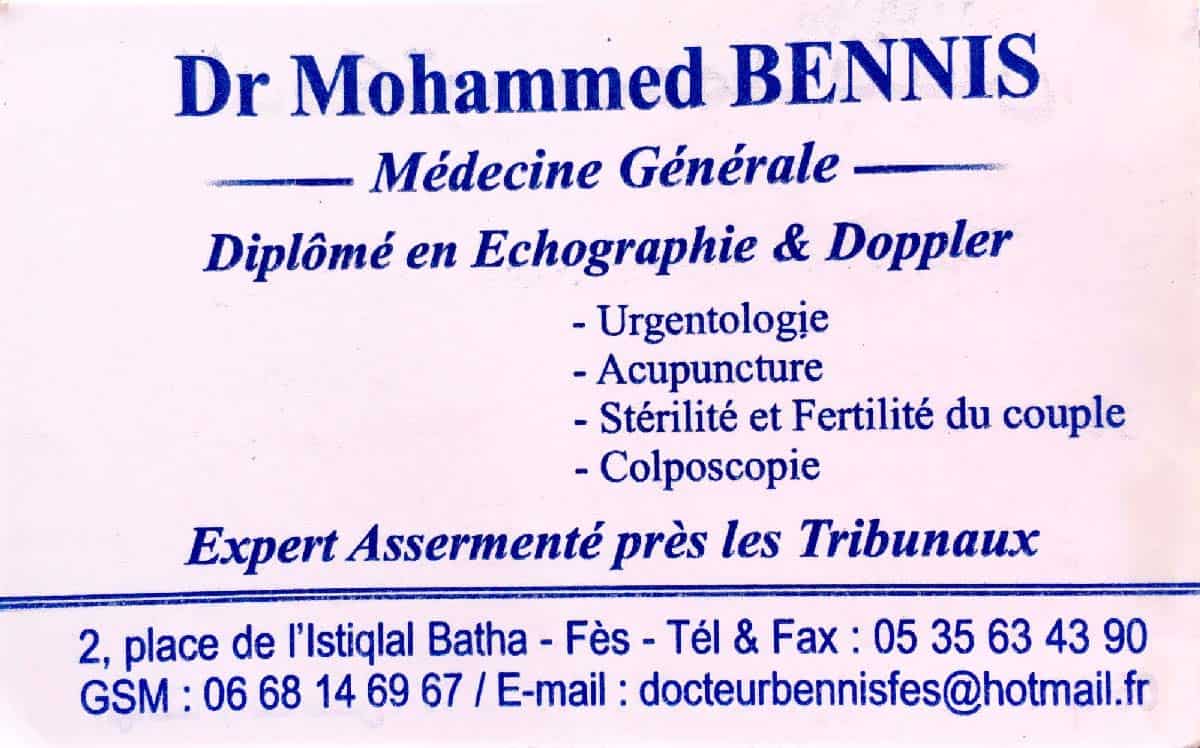 […] best/funniest stories of my nearly three years of traveling. This all took place during my visit to Fez, Morocco in […]

[…] best/funniest stories of my nearly three years of traveling. This all took place during my visit to Fez, Morocco in […]

[…] finest/funniest tales of my almost three years of touring. This all happened throughout my go to to Fez, Morocco in […]

[…] When Traveling Sucks: A Hospital Visit in Fez, Morocco by Foodie Flashpacker […]