The Making of a Foodie or An Ode to Filipino Food 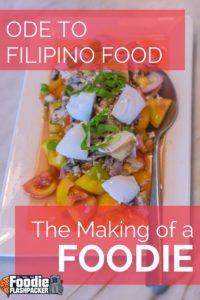 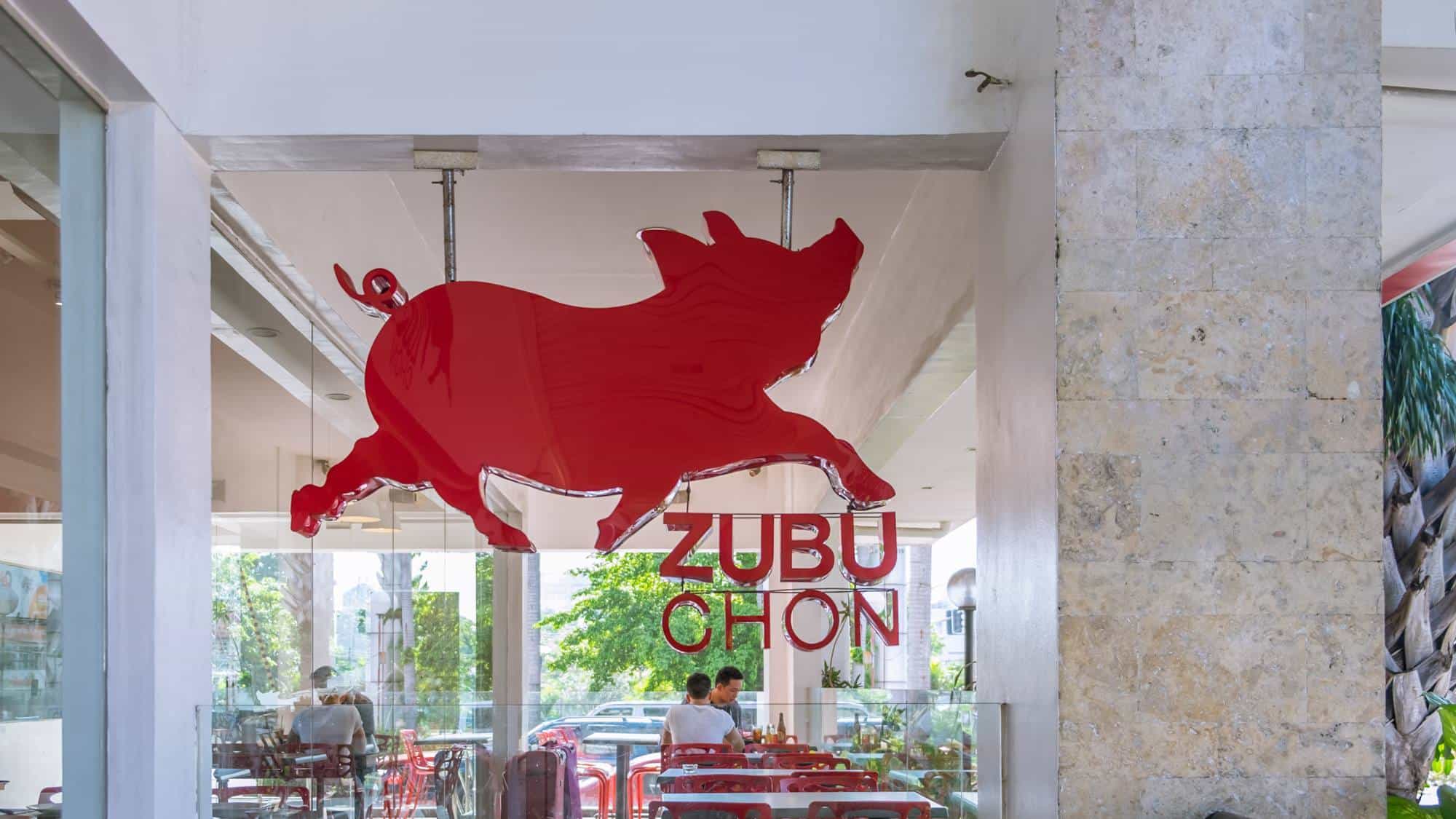 “I’m not really into food,” Ajay told me. “In fact, when I travel, I think food is a waste of time.” I tried not to be personally offended.

In that moment, I challenged myself to make my new friend see the error of his ways. Ajay is an award-winning photographer and was recently named one of the best photographers in all of India. I wondered how someone from a country so famous for food could not be a foodie. I decided to make a believer out of him. Someone with such fine taste in all things related to photography had to have foodie potential.

Fortunately for me, I would have help in winning Ajay over. Ajay was a part of my FAM trip in the Philippines during my recent TBEX experience. If you recall, the event organizers did a phenomenal job of wining and dining us.

But even so, I knew it was going to be a challenge. In his one and only post about food, Ajay actually wrote “food is a necessary evil we have to waste time on during our travels. In my nomadic stints, I make do with whatever takes the least time and provides enough energy to keep moving on.”

We were set to attend a lunch at the world-famous Zubuchon, which became internationally acclaimed after famed chef Anthony Bourdain declared that they served the best pig he’d ever had.

This lunch would highlight the very best in Filipino cuisine, and I strategically positioned myself in a seat across the table from Ajay as the dishes began appearing onto the table before us.

First up, an easy introduction to Filipino food. A pineapple mint shake typically served as a welcome drink. Universally loved, this one needed no help getting everyone to agree how great it was. 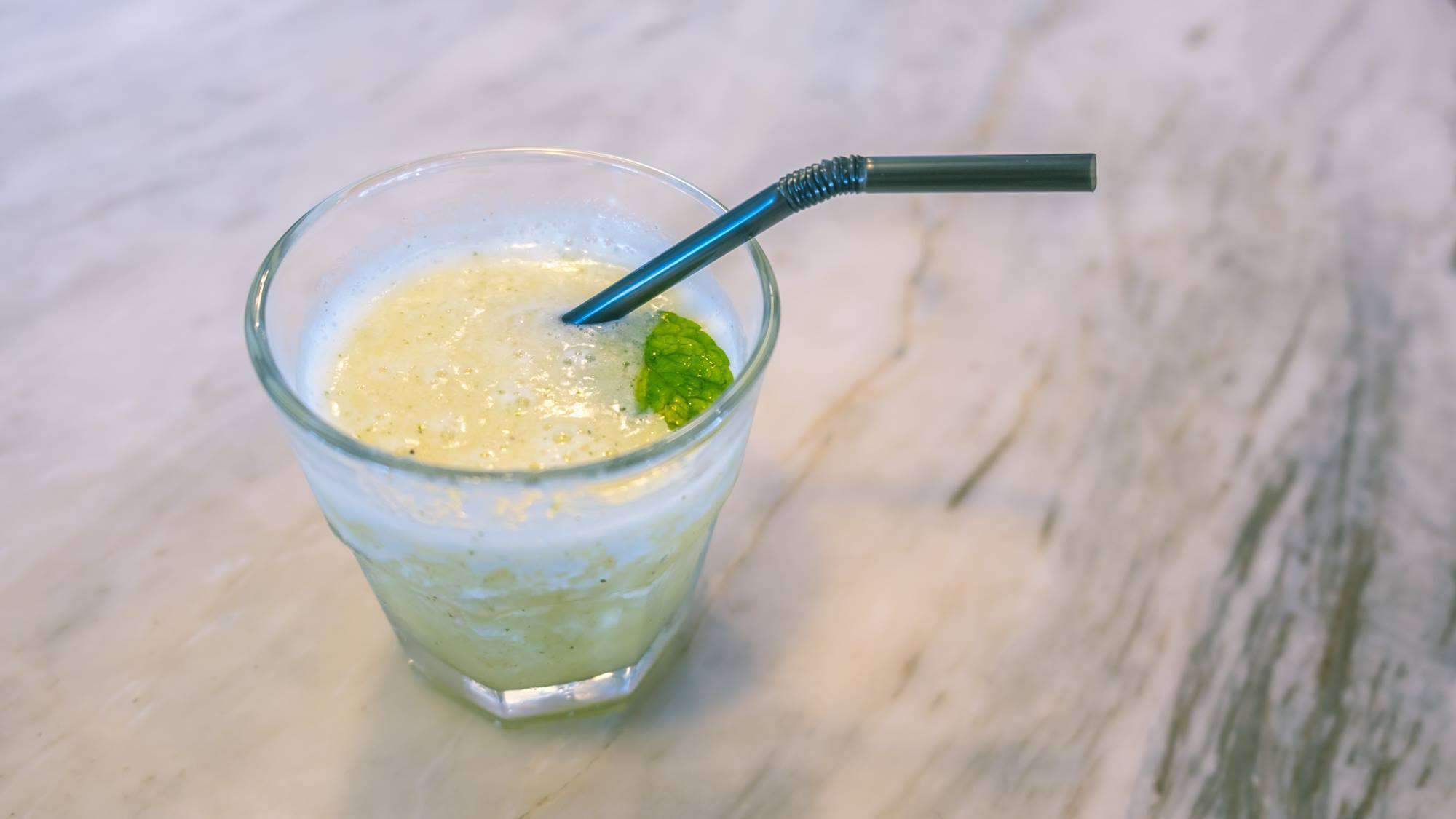 Grilled scallops served on the shell were up next. These were breaded with a panko like topping and tasted buttery. This is another dish that most everyone can agree to appreciate. 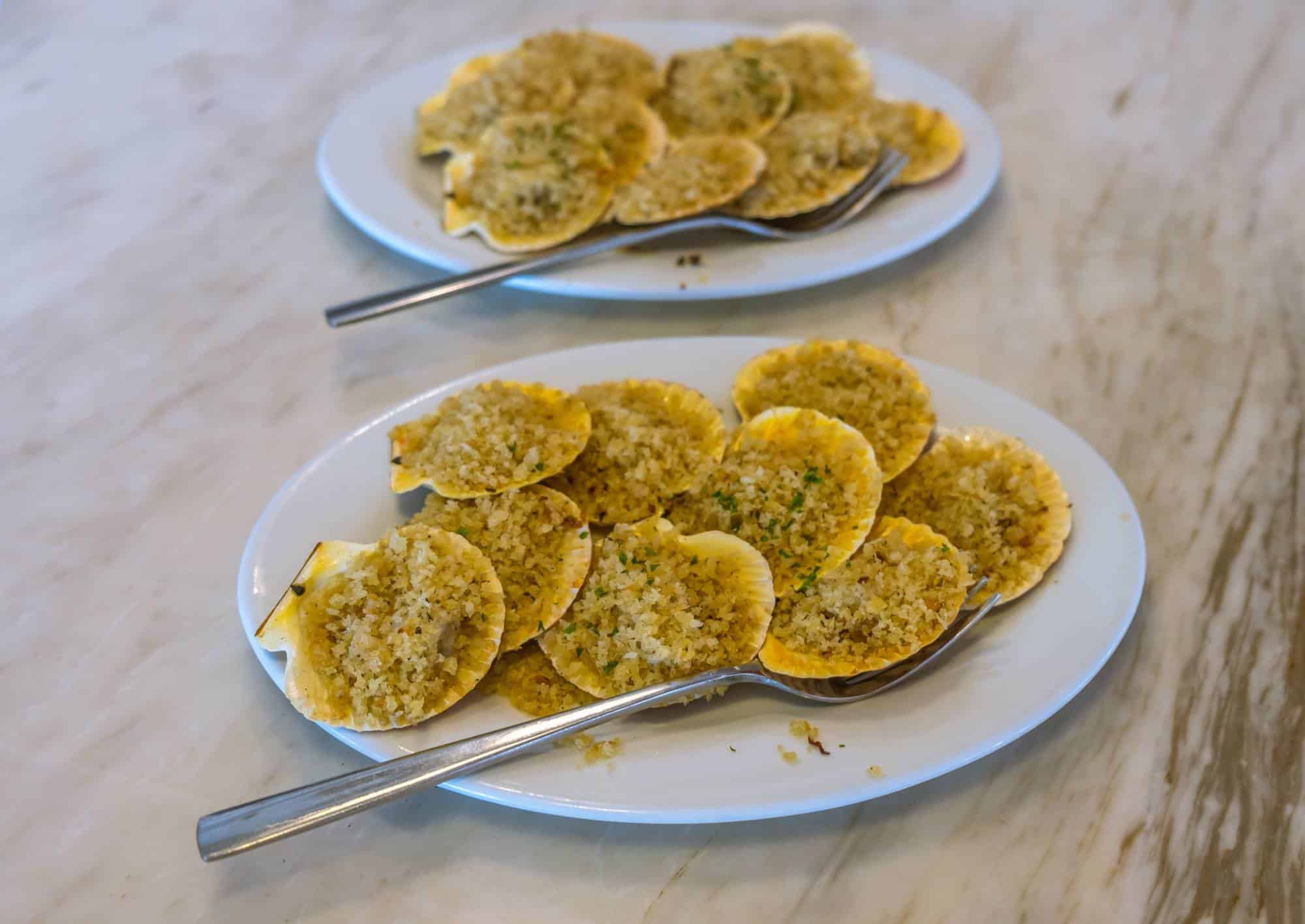 Then, servers carried out the next course–fish skin tacos. I was eager to try these, because I had never heard of them before. Deep fried fish skins served as taco shells, which you added freshly made ceviche to before enjoying. Personally, I loved the ceviche, but the group agreed that the fried fish skins was just okay. 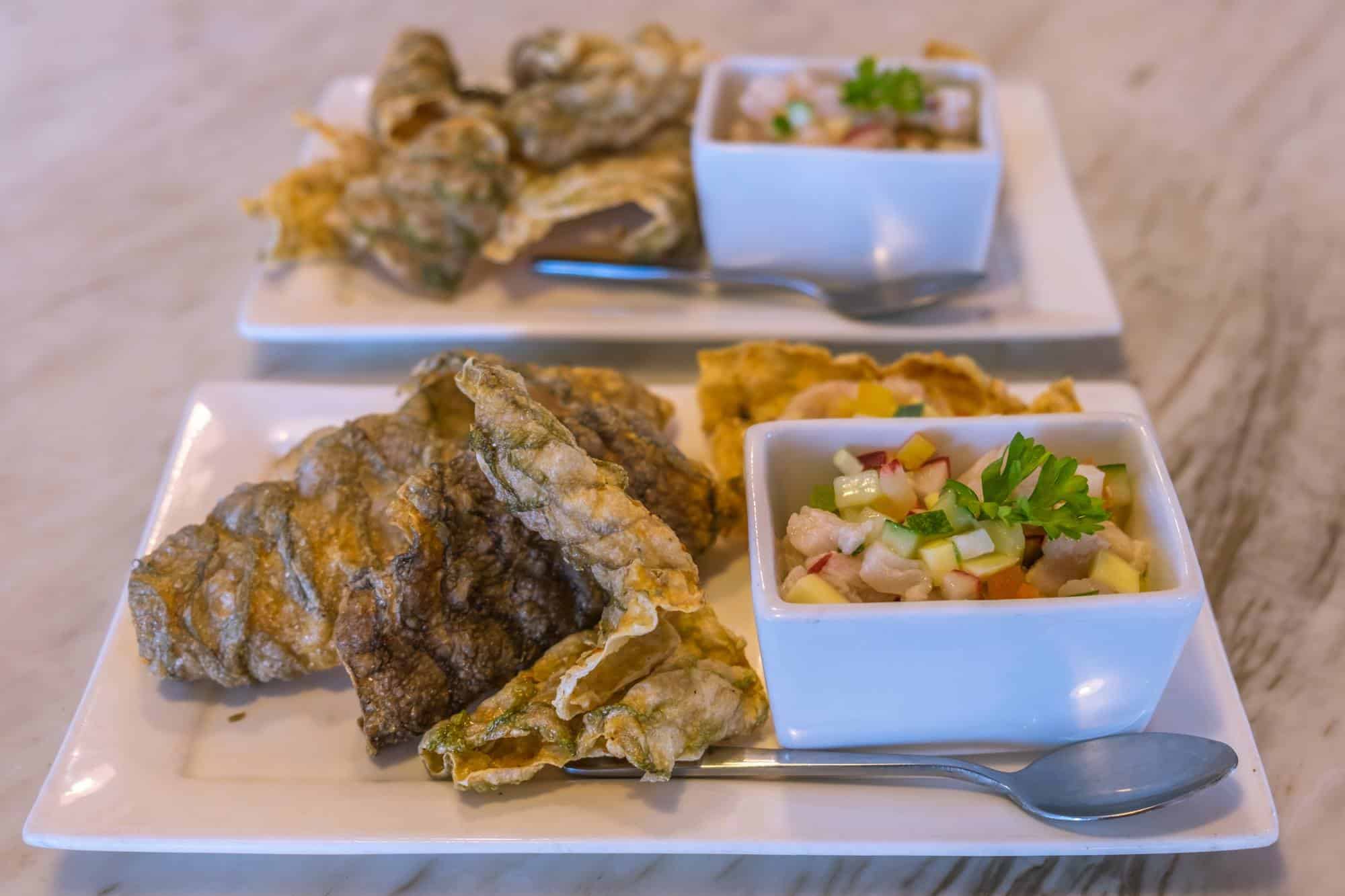 Platefuls of sotanghon guisado came out next. This dish is made of spicy noodles and served with lime to squeeze over the top before mixing and eating. 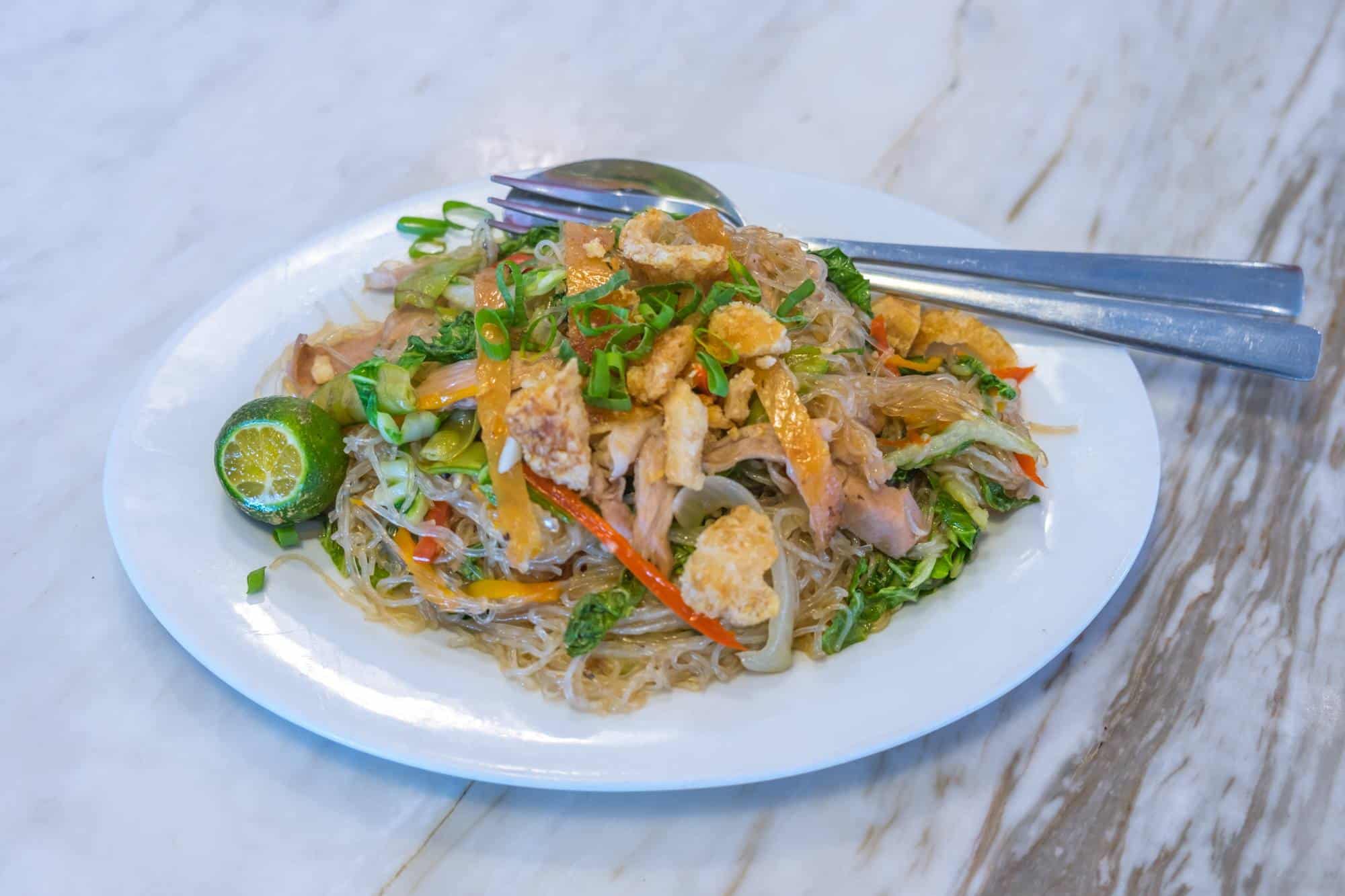 After each of these universally enjoyed dishes, the restaurant finally threw us a curve ball– dinuguan. Diniguan is a savory pork stew simmered in a dark gravy of garlic, chili, vinegar and pig’s blood: pig’s blood soup. I was anxious to see how Ajay would respond to the dish. 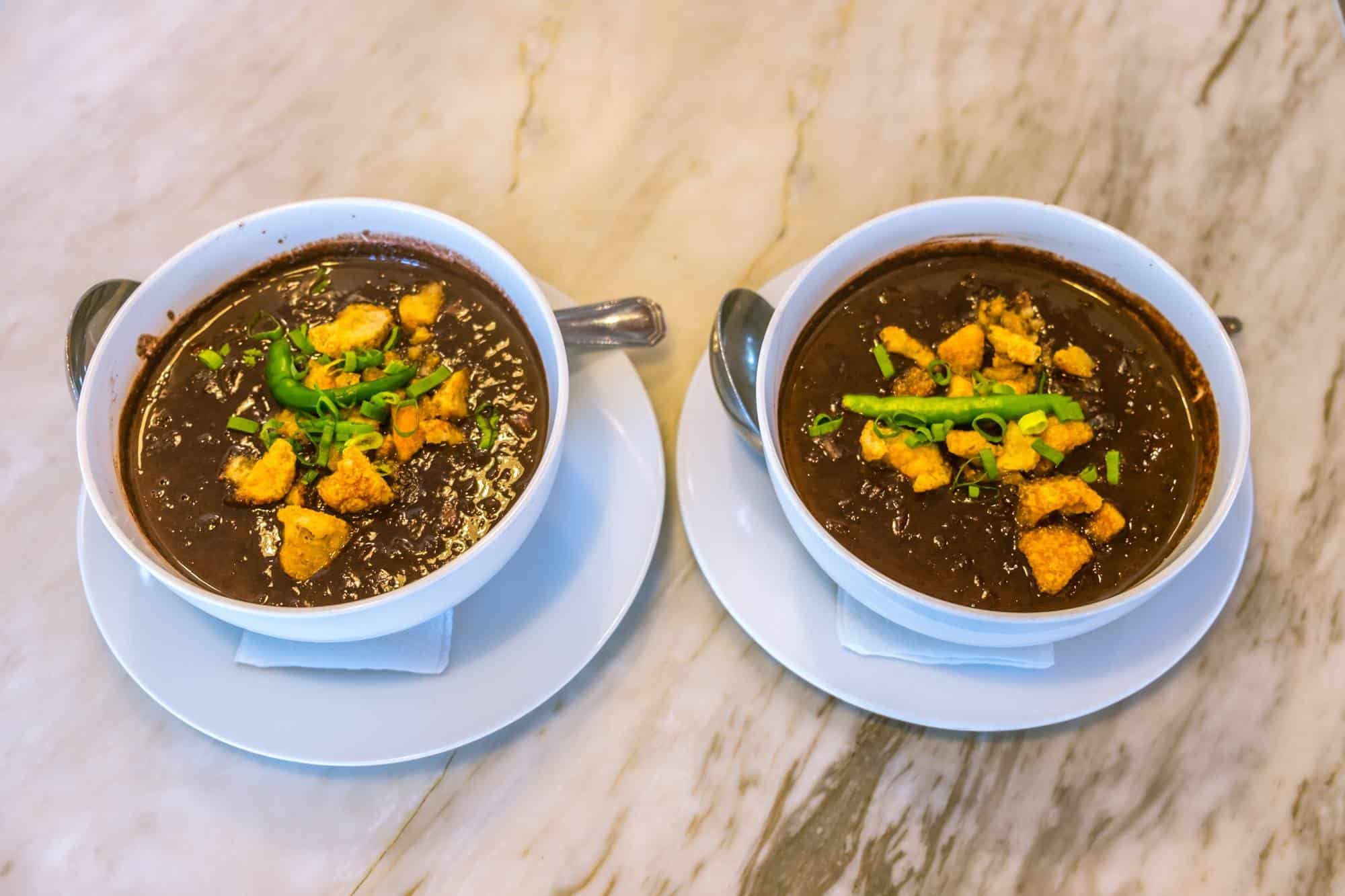 Ajay surprised me by jumping right in, seemingly curious to try the new dish. After his first bite I asked him to describe the taste: “warm, salty then sour, smooth in consistency with a slightly bitter aftertaste,” he said.

We were served not one, but two types of lechon. My favorite was the boneless spicy version. The lechon was another dish that everyone at the table could agree on. 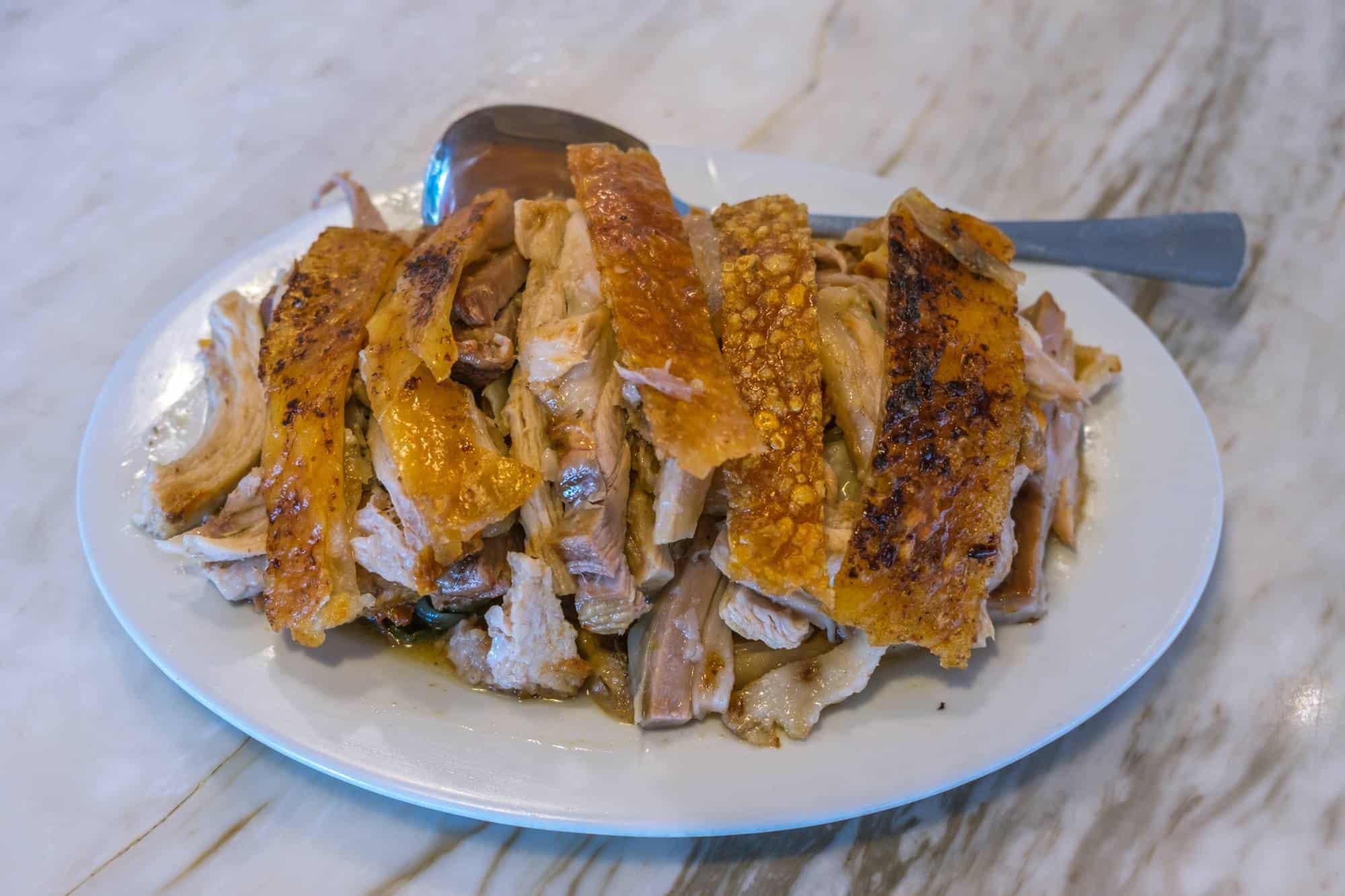 I was a bit apprehensive of this salad because of its salted eggs. I don’t normally like salted eggs, because as the name implies, they’re usually (too) salty. This dish is known as ensaladang kamatis it log na maalat at tinapang bangus. That translates to smoked bangus with salted egg and tomato salad. Bangus, also known as milk fish, is the national fish of the Philippines. In the end, I enjoyed the dish and thoughT it worked well because the tomatoes cut the saltiness of the eggs. 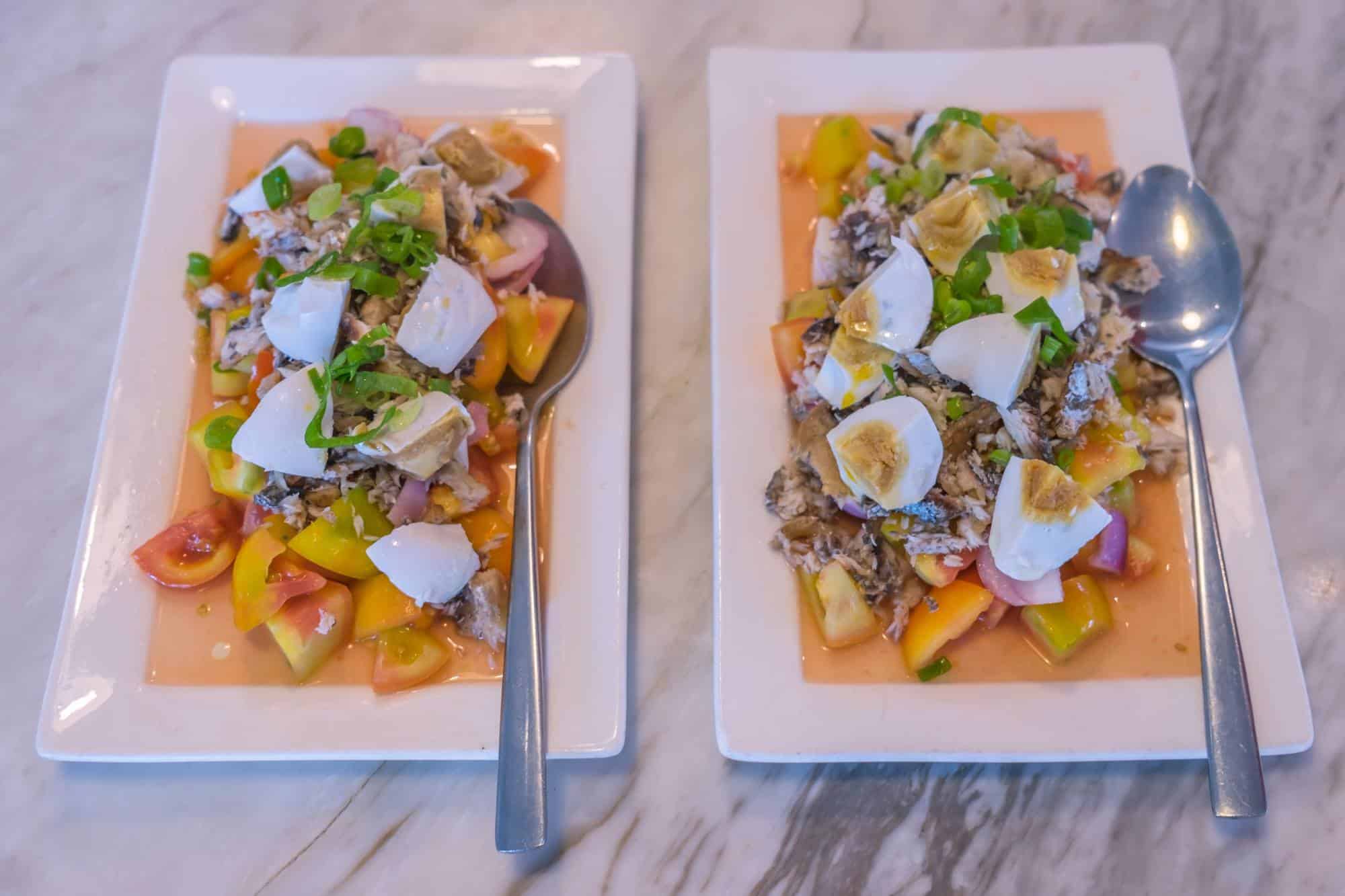 And finally, dessert. We were served biko, which is a traditional Filipino dessert made of sticky rice, coconut milk and brown sugar. I’ve mentioned before that I’m not much of a dessert person, and this dish didn’t sway me much. It was very sweet, probably as desserts should be, but was not to my taste. 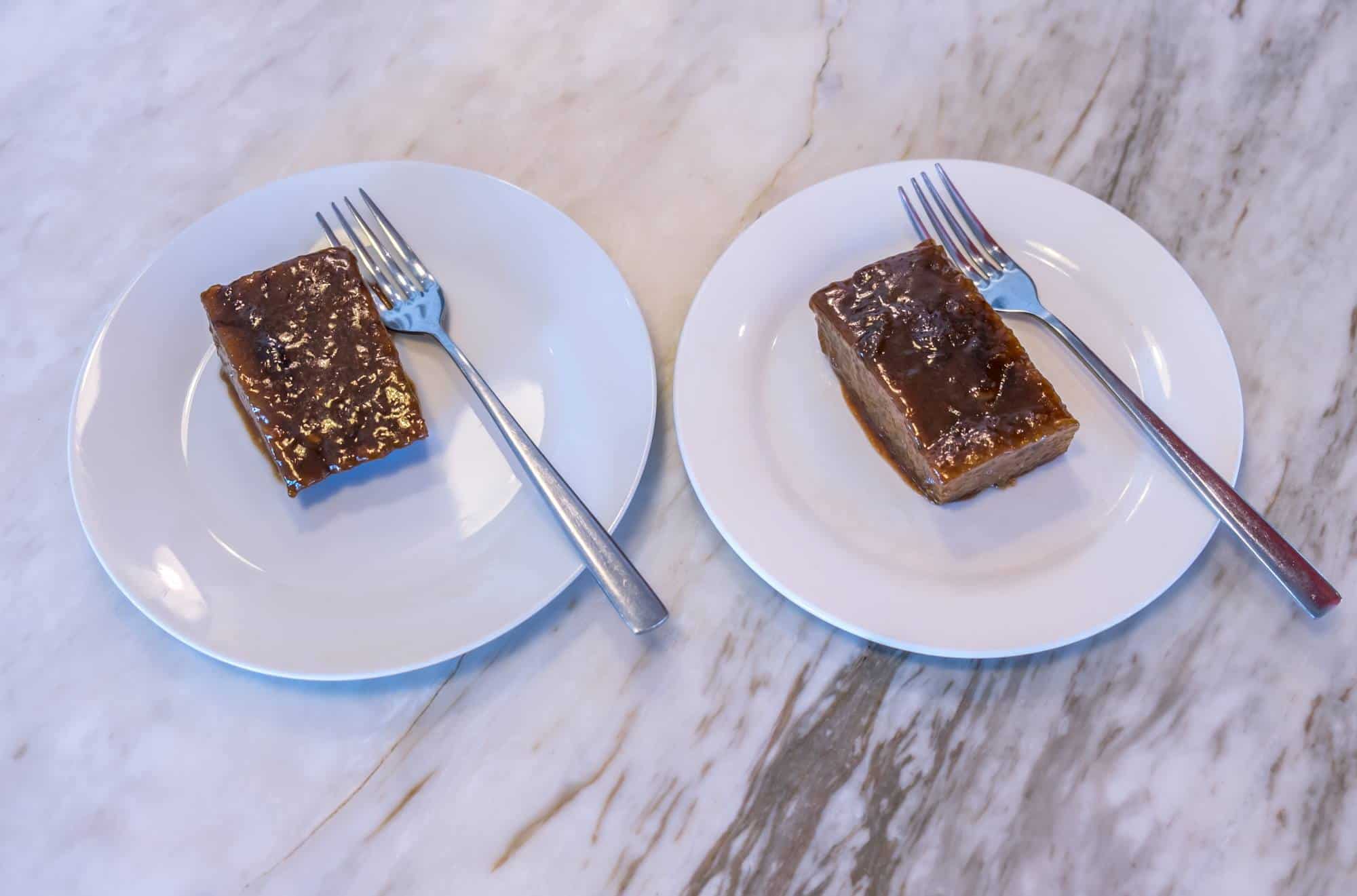 By the end of the meal, Ajay had declared that he liked nearly every dish. But would he call himself a foodie now? Perhaps not yet. Still, I did notice that he recently checked into Newtons, a popular local food center, during his recent visit to Singapore, so maybe he’s on his way.

Which dish looked best to you? Tell me the dish you would most like to try in the comments section below!

All photos credited to Ajay Sood. 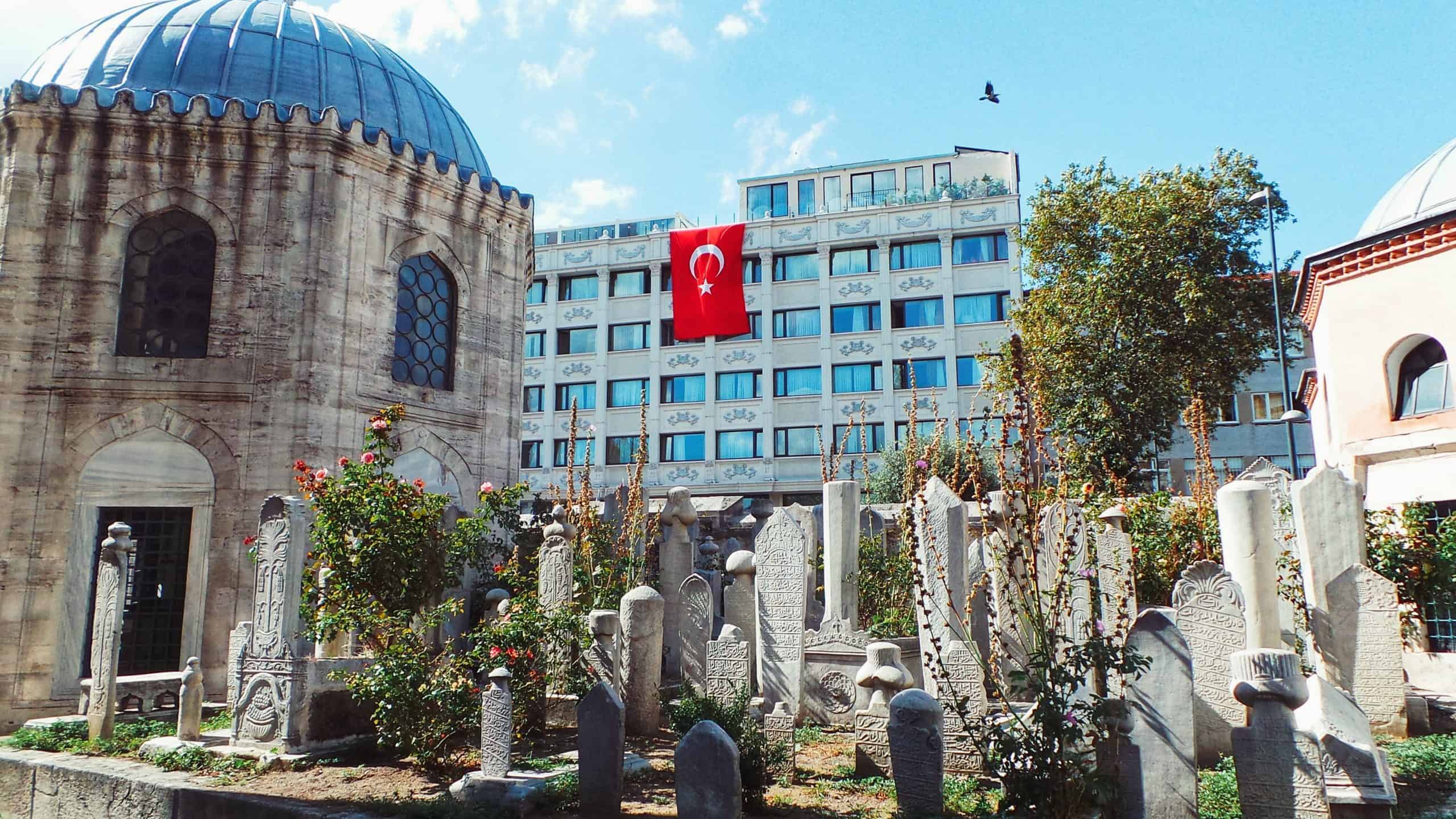 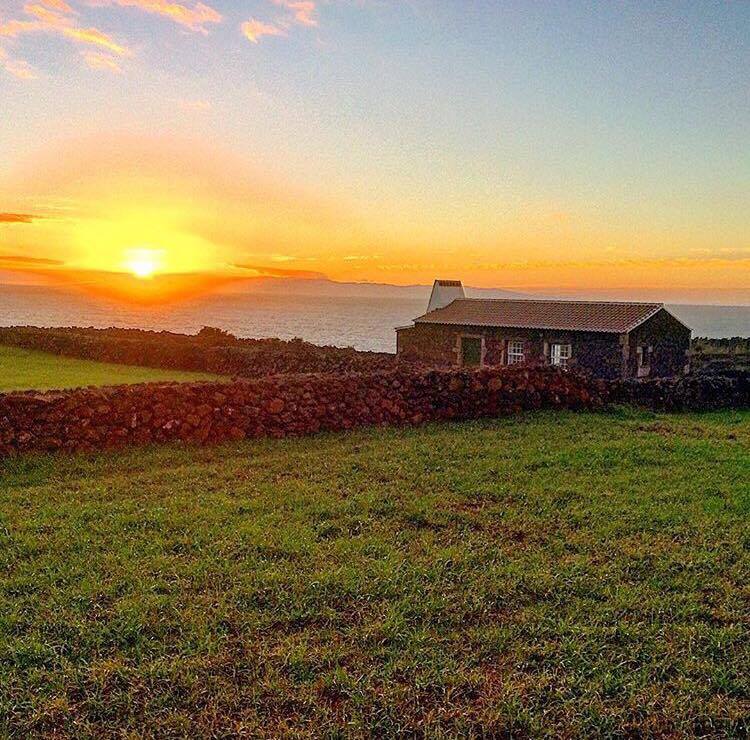 I love Biko, It was one of the first Filipino Desserts I have learned and tasted

We are complete foodies (of the vegetarian kind) so we know your feelings when someone utters such a statement :) however though we may not ever try most of the items you've covered in your post, we can literally see your enthusiasm in converting Ajay.. We see he's become a reluctant foodie now :)

I don't think I have had Filipino food before but I would love to try all of them! Thank you for sharing :)

Whoa! Such delicious spreads. I often forget to read when I see these food pics. And names like " ensaladang kamatis it log na maalat at tinapang bangus" - how does one sell that? I will have to point my fingers to place an order. :)

I had to text one of my Filipino friends to help me w/the spelling on that one!