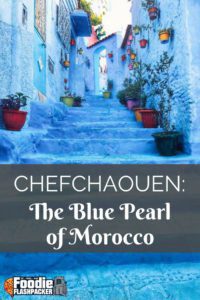 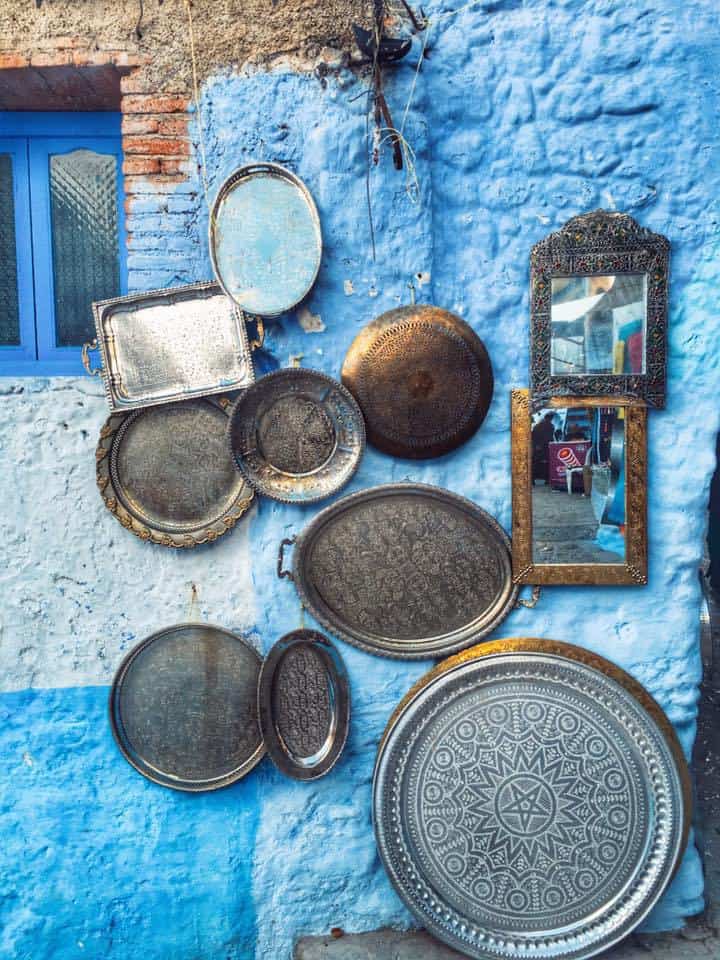 Chefchaouen wasn’t on my initial itinerary for Morocco. I had initially planned a tour of the Sahara Desert. It was only after my friend Jaime from Breakaway Backpacker found out I was in Morocco and suggested I go that I started researching it. I was thankful for his suggestion as it turned out to be one of my favorite cities in Morocco.

Chefchaouen is unlike any other city that I visited while touring the country. It felt far away from the madness of cities like Marrakech and Fez yet still distinctly Moroccan. Even though it is squarely aimed at tourism it was also one of the most cost affordable cities I found during my visit, especially for food.

Located in northwest of the country the city is famous for it’s distinct blue walls. Many people refer to it as the Blue Pearl of Morocco. Sitting in the bus viewing the town as we approached I remember thinking to myself that the city didn’t look all that blue. As soon as we arrived I was quickly proven wrong. 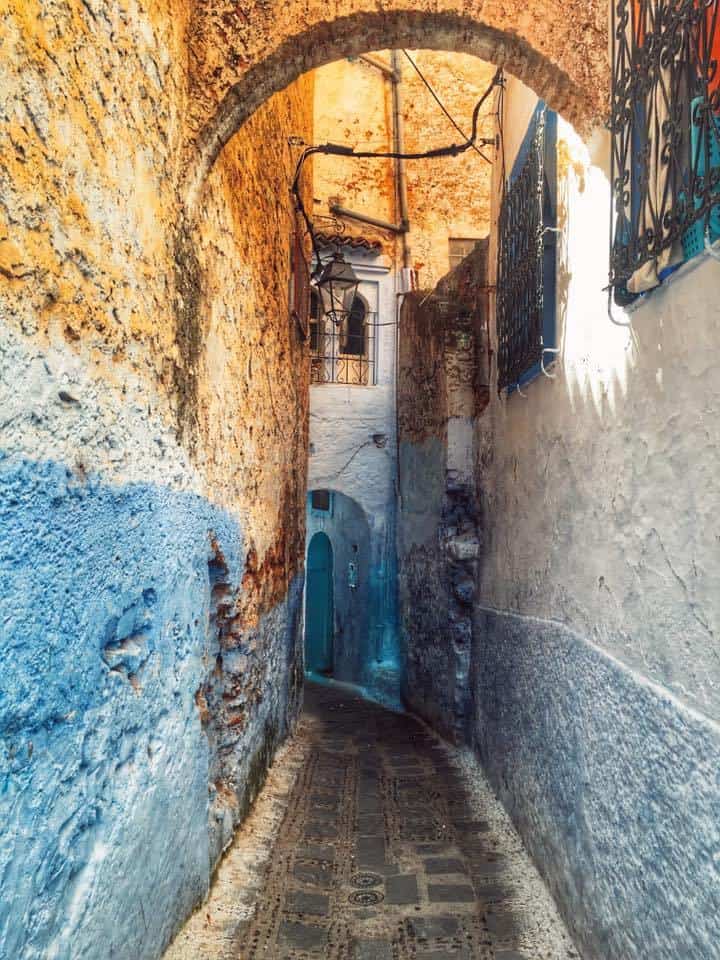 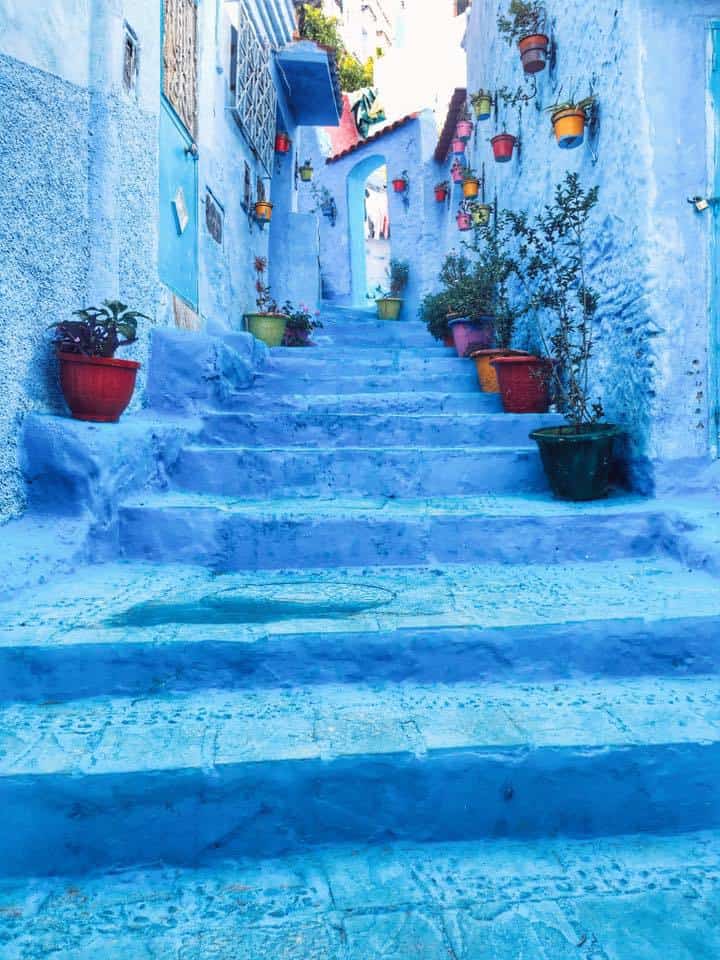 Around every corner there was some brilliant display of varying shades of blue. 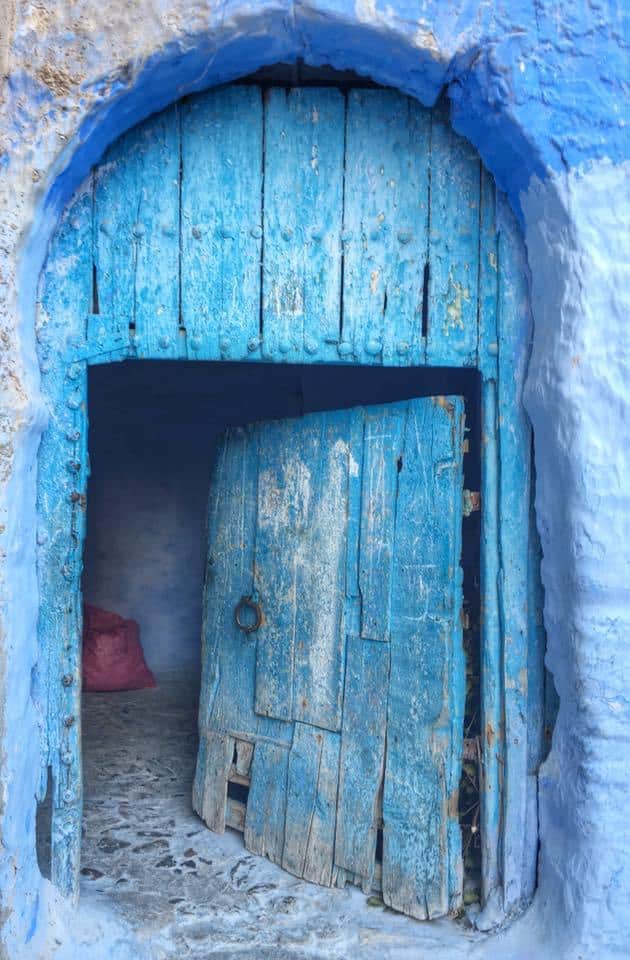 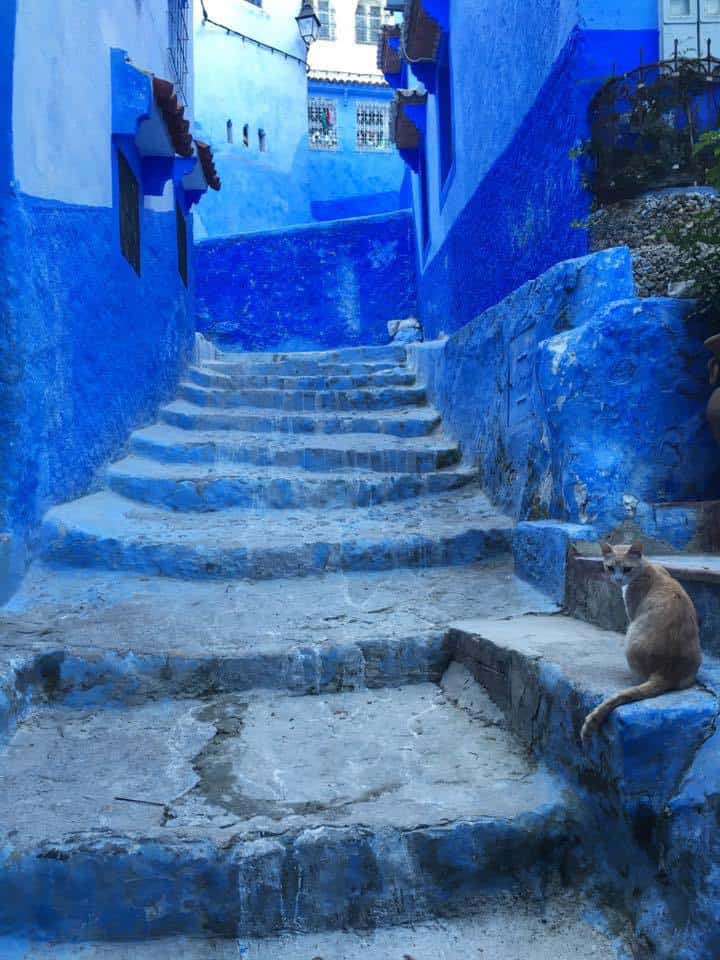 There’s a lot of speculation as to why the town is painted blue. Some say it keeps mosquitoes away. While it’s true I never had a problem with any like I did when I was in Fez I tend to think it has more to do with some of the other reasons I heard. Some of these explanations are that the color represents the sky and heavens which serves as a reminder to lead a spiritual life. Another says that Jewish people introduced the color to locals when they came seeking asylum from Hitler. And some even say it’s just pretty, which I can agree with. 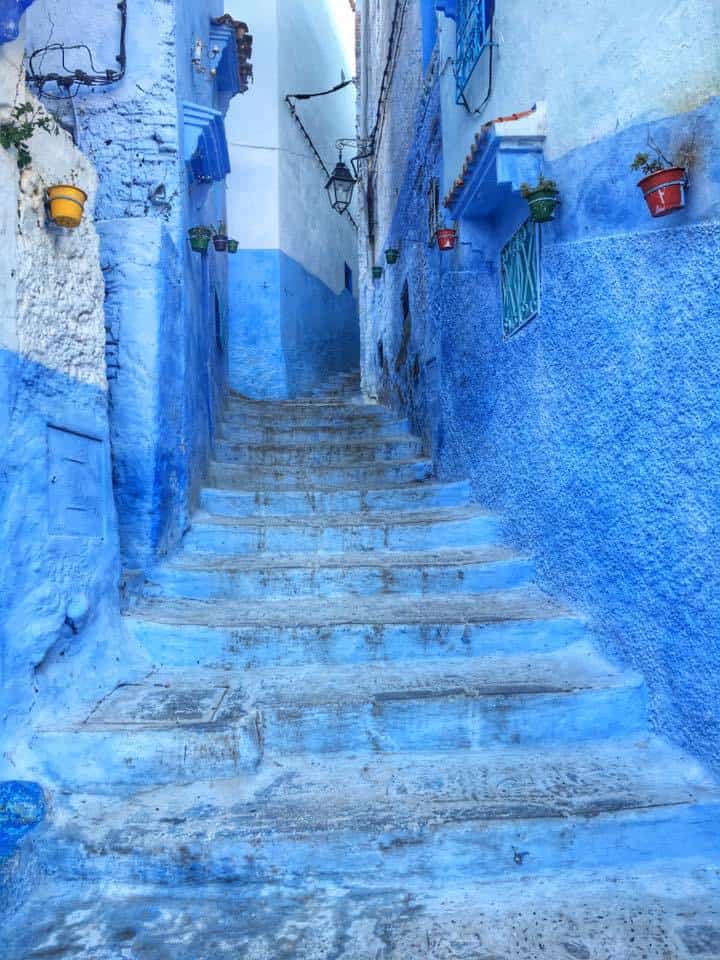 I initially planned to only spend one night in Chefchaouen, just long enough to check it out and grab some photos. When I arrived and discovered how relaxed the city was I booked three nights. One of the reasons the town may be so chilled out is because Chefchaouen is known as the marijuana capital of Morocco. I was offered hashish for sale several times per day. When I would decline they would tell me “it’s ok, it’s legal here.” While I doubt that I did notice locals openly smoking on the streets several times. It was a bit surreal to walk through this city colored in so many shades of blue and smell the sweet, familiar smell of hashish lingering in the air. 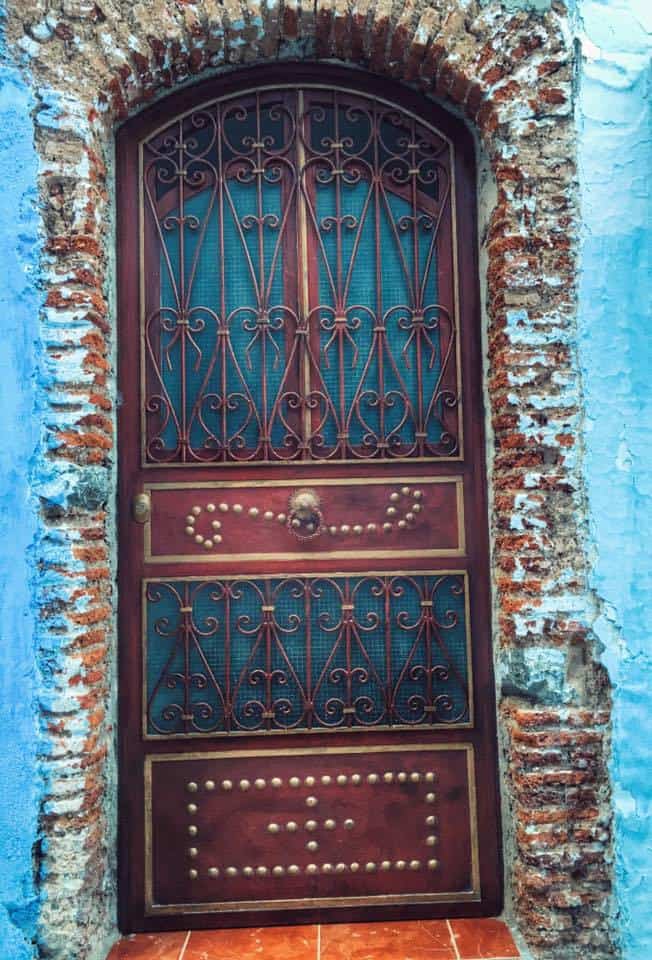 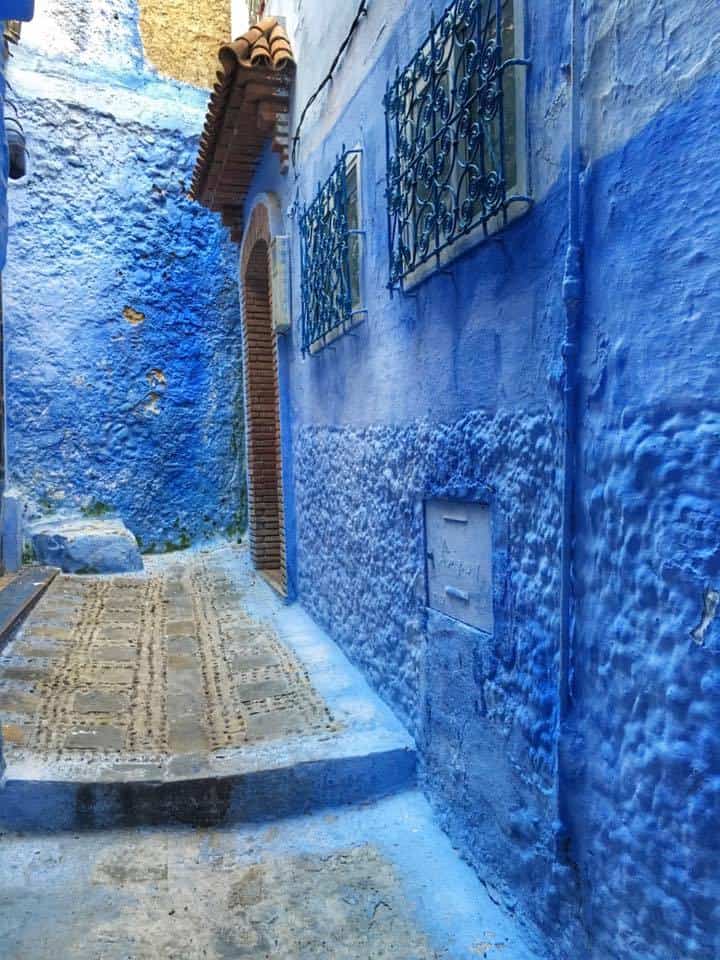 If you’re planning a visit to Morocco I would highly suggest visiting Chefchaouen, even if only for a day or two. The scenery, relaxed atmosphere and value for money all make it easily worth your time.

And, because it wouldn’t be my blog without somehow working in some food pics, here are some of the incredible foodie finds I mentioned above: 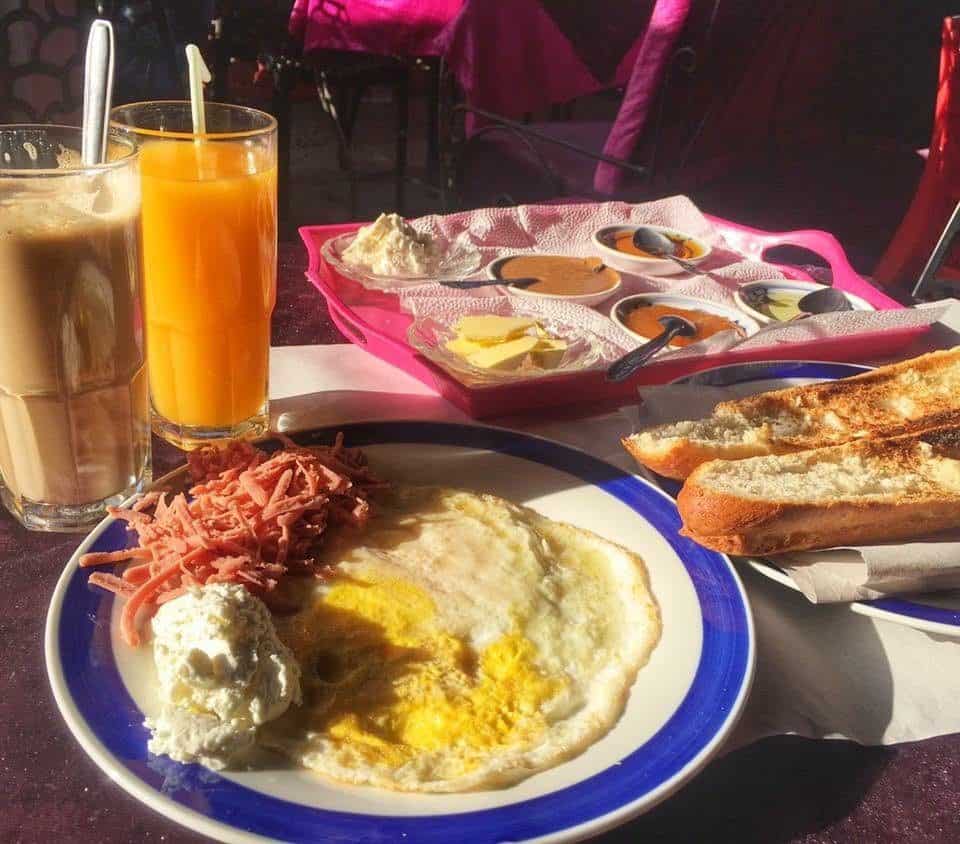 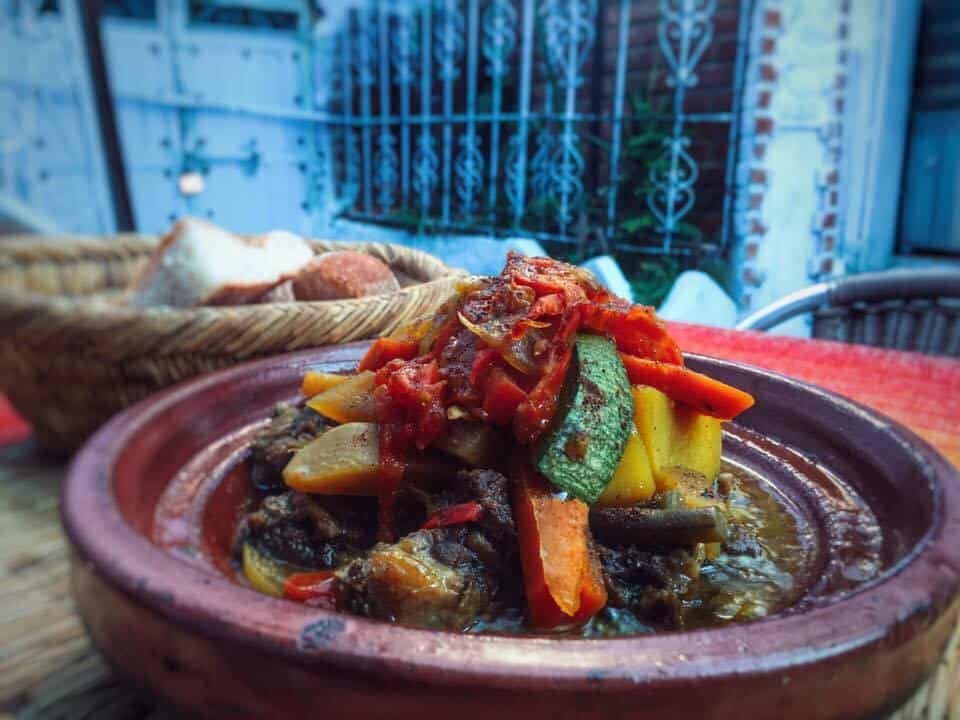 Getting there: I used CTM bus line from Fez 75 dirham/$7.68. The bus was comfortable enough and arrived pretty much on time.

If you arrive by bus there will be taxis waiting. Bargain the price down to 10 dirham/$1 USD. Don’t try to be cheap like I did and walk up by yourself. It’s all uphill. It’s worth the $1. Trust me.

Go with Maroc Telcom if you plan to buy a SIM card. I bought service from INWI and regretted it. The service with INWI was bad out of major cities. On the bus ride between Fez and Chefchaouen people on Maroc Telcom were able to FaceTime when I couldn’t even get a signal.

I stayed with Pension Mouritania and would recommend it for a budget room. I was able to talk the price down to $8 USD per night for one person staying in a double room with a shared bathroom. The rooms were simple and clean and the wifi worked well. At the time I stayed the property was not yet listed on Booking.com but they said it would be soon. You can email to check availability at [email protected] or call at 00212 539 986 184. If it’s low season you could probably just turn up and grab a room. The address is Rue Kadi Alami 15 or just ask anyone to point you in the direction. If you have someone walk you there they will expect a small tip.

Love Chefchaouen, it is a hiden gem. I love the picture for the breakfeast plate.!

That breakfast was amazing! I would go back just for it.

Welcome to our place in Chefchaouen:

“Strolling through Chefchaouen is like being inside a Chagall painting” Melena Ryzik, New York Times.

I love Chefchaouen. It's still to this day on of my favourite places. Thanksfor sharing.

Wow, its distinct blue walls will surely be amazed for visitors who will take a visit to Chefchaouen, Morocco. And the food looks tasty. :)